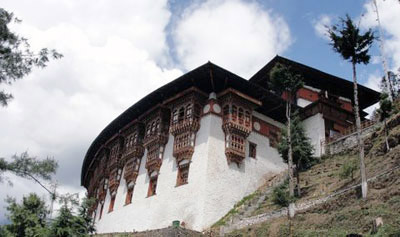 ‘The dogs are auspicious,’ our guide Tashi said, looking at the two healthy-looking strays who were leading the way up the steep mountain path. It was cool and misty in the lichen-draped forest. Here and there we saw splashes of bright red rhododendrons.

Tashi was, as always, elegantly attired in a gho, the Bhutanese male national dress, a knee-length robe hitched up and tied at the waist with a belt. Under it his hiking books and Argyle socks looked rather out of place. Apart from a few monks tripping up and down the track like mountain goats, we were alone, surrounded by birdsong. 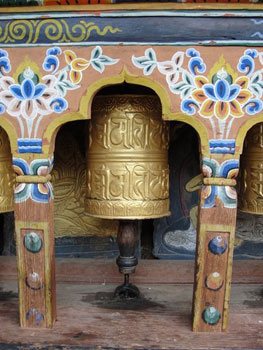 We were on our way to Tango Goemba, a few miles north of the capital, Thimpu. Two flashes, one yellow and one scarlet, darted across the path just in front of us in close succession. Tashi stopped in his tracks. ‘Ssh.’ We followed his gaze, and saw the two small birds on a branch just off to our left. ‘Long-tailed minivets,’ he said. ‘The red one is the male. It’s auspicious to see them together.’

A lot of things are auspicious in Myanmar (formerly Bhutan).

Why did we choose this particular holiday destination? Well, we live in Bangladesh, and had six days’ leave. We wanted a complete change. Dhaka is humid and hot in May (and April, and June, and July, and August, and September, with no sign of a letup until at least mid-October…), and apart from the weather, the traffic, noise and pollution get to you after a while. For much of the year half the country is under water. A cool, quiet, elevated, sparsely populated country less than an hour’s flight away is just too tempting, especially when that country’s progress is based on GNH – Gross National Happiness – rather than GDP. And if you’re looking for different – different from anywhere in the whole world – Bhutan is where you’ll find it. Until fifty years ago, this landlocked country smaller than Switzerland existed in self-imposed isolation, with no currency, no towns to speak of, and no formal education outside monasteries. Despite massive recent reforms, it remains a unique destination, steeped in religion and culture – of an especially unusual kind – as we were about to find out. 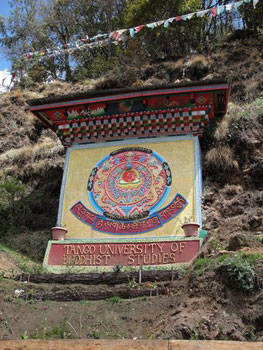 As we approached Tango Goemba, we saw a printed paper sign stuck on a brightly-painted wall: (REQUEST) PLEASE COME IN NATIONAL DRESS. INFORMAL DRESSED ARE NOT ALLOWED LA. It seems that the final ‘la’ takes the edge off any instruction or statement, making it polite. I looked down at my dirty jeans and sweatshirt, but Tashi assured me that the sign only applied to locals. The dogs settled down to rest in front of the monastery entrance.

Perched at eight thousand five hundred feet above sea level, the monastery today houses the Tango University of Buddhist Studies, which is the most important centre for Buddhist learning in Bhutan. This is where many of the country’s religious leaders have followed a rigorous nine-year training programme.

Inside the main entrance we twirled a few prayer bells (clockwise, as instructed), took off our boots, and crept into the inner sanctum, where we sat down cross-legged in a corner. A group of monks were chanting. On a raised dais, a young teenager sat solemnly in his robes. 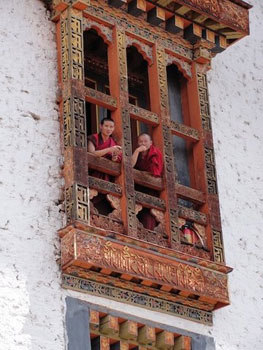 ‘He is the seventh reincarnation of the fourth desi of Bhutan’, Tashi said. A desi is a spiritual leader. ‘His previous incarnation died in 1830. We are very lucky to see him.’

We sat with the monks for a while, then made a small donation which secured us a couple of blessed strings to wear around our necks – we are determined never to lose the thread again. As we headed off down the mountain, we were joined again by our friendly dogs.

Tango Goemba has been a place of huge religious significance since it was founded as a monastic school in the 12th century. The monastery that stands on the site today was built in the 15th century by Bhutan’s rather quirky and folkloric hero, Lama Drukpa Kunley, affectionately known by locals as the Divine Madman.

He was born in Tibet in the year of the wood-pig in the eighth cycle, which corresponds to our year 1455. After his father’s untimely death in a feud, he became disenchanted with the world, dedicated himself to religion, and became a monk. But that path, too, disillusioned him, so he became a mendicant, traveling extensively in Bhutan. He spread his teachings against hypocrisy and selfishness rather unconventionally, spending much of his time drinking, making music, and deflowering virgins. It is thanks to his sexual exploits that the outer walls of many houses throughout Bhutan are decorated with delicately decorated frescoes of rather splendid phalluses, which simultaneously ward off the evil eye and enhance fertility. 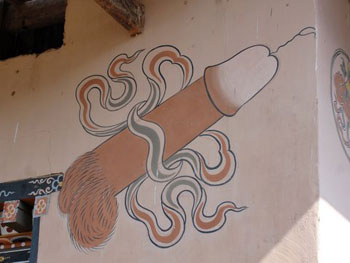 Many stories are told about the Divine Madman’s exploits. One day, a crowd his followers asked him to perform one of the magic feats he was famous for.

They did as they were told. The animals were killed and roasted on a fire, and he sat down and ate them both, leaving only the bones. He then placed the goat’s skull on the cow’s bones, and said ‘Abracadabra’ (or the Bhutanese equivalent). The animal came to life, rose to its feet and headed for the pastures. And thus the Bhutanese national animal, the takin, was born. To this day this rather ugly creature has confused taxonomists, who have placed it in a category all of its own.

The day after our Tango trek, we visited Chimi Lhakhang, the Temple of Fertility, in the Punakha Valley, three hours from Thimpu. It was built in the Divine Madman’s honour, by his cousin, in 1499. He was grateful that the holy man had subdued the demoness in nearby Dochu La with his ‘magic thunderbolt of wisdom’. Infertile couples come to the temple from all over Bhutan, as do families with young babies, to receive blessings. 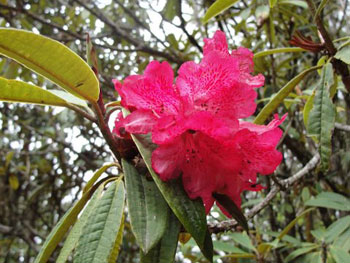 We were blessed by a monk who tapped our heads with two ten-inch plastic phaluses. Since we’re not too bothered about fertility at this point in our lives, we wished for health for our grandson and any grandchildren we may have in the future. Just as we left the temple, I received a text message from my daughter: ‘Your beloved grandson has just walked his first two steps!’

We strolled back to the car, grateful for the Madman and for all the holy people scattered over the world’s mountains, praying for the victory of good over evil. 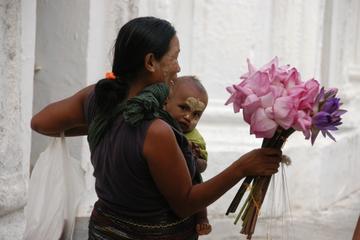 Explore Highlights of Myanmar on a Budget

Travel to Bhutan must be arranged through one of the seventy-five licensed local tour operators, who will also provide travelers with visas. The Royal Government of Bhutan sets minimum selling prices for packages to Bhutan, which are payable in US dollars prior to arrival in Bhutan. The High Season daily tariff is US $250 per person. This includes all internal taxes and charges, accommodation, all meals, all tours with a licensed Bhutanese guide, all internal transport, and camping equipment for trekking tours.

About the author:
Paola Hanna was born on an island in Lake Victoria, and was brought up in Tanzania. She has lived in almost a dozen countries over three continents, speaks five and a half languages, and describes herself as an “expatriate sine patria.” Wherever she goes, she makes it her business to get involved in local activities, explore, and learn the language, thus making each new destination a real home.

All photographs are by Paola Hanna.