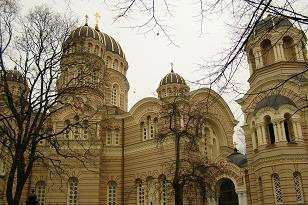 I was walking around the historic center of Riga, Latvia, when something weird caught my attention. Just behind St. Peter’s church, in a little courtyard, I noticed a bronze sculpture which represented four animals: a rooster on a cat, the cat was on a dog, the dog on a donkey’s back. I immediately recognized the main characters of a well known fairy-tale collected by the brothers Grimm: “The Bremen Town Musicians.” However, I was in the biggest city of the Baltic nations, not in Germany. The Russian border was a couple of hundreds kilometers away. I expected to find many Soviet signs instead of a thing that clearly linked Riga to the heart of Europe. A few days later, though, I learned the reason of that sculpture, finding out how Latvians’ roots and aspirations for the future are deeply tied to Europe.

By the end of the 12th century, the Archbishop of Bremen appointed his nephew Albrecht von Buxthoeven as Bishop of Livonia. Livonia was the ancient name for the area today occupied by Latvia and the southern part of Estonia, which was inhabited by animists. Supported by German King Philipp and Pope Innocent III, Albrecht joined the so-called Baltic Crusades, founded Riga in 1201, convinced the pagan folk to become Christian and built a magnificent cathedral, the biggest in the Baltic states. Therefore, the first link between Riga and Bremen, and more generally between Latvia and Europe, dates back 800 hundreds years ago. Afterwards, the Hanseatic League kept Riga’s relationships close to the Westerner countries for many centuries: again, in this way Bremen and Riga strengthened their mutual connection for business purposes. The last seal of this long friendship was ratified in 1985, when the two cities signed a town twinning agreement despite the Soviet rule. 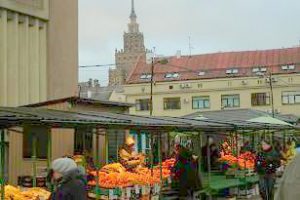 In 1997, the old town of Riga was made a UNESCO World Heritage site. I explored those neat streets in a cold November afternoon. Old buildings and beautiful monuments stood behind every corner. I crossed the Daugava river to have a look at the wonderful skyline of this city, which impressed me with its sharp and long towers.

People there are kind when it comes to asking some information, but still cold. I believe that the Soviet rule – which lasted until 1991, the year of Latvian independence –scarred not only the surrounding landscape of this capital, full of chimneys, ugly factories and anonymous dormitory buildings destined to the laborers, but also the people’s souls. Smiles are rare; everybody on the street looks completely lost in their thoughts about everyday-life concerns. As a matter of fact, richness is very unevenly distributed, quality of life can be improved and many political problems are not solved yet. 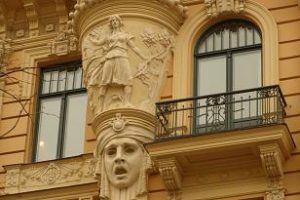 Perhaps the way towards diffused wellness is still long, but during this attempt it is possible to see many surprising contradictions. For instance, prices are rather low for a European capital (Latvia joined both the NATO and the European Union in 2004): you can have a dinner for less than 20 Euros, drink half a liter of beer for 2 Euros and take a coffee in a sophisticated bar for the same amount. However, only a little part of the population is able to afford such things and, those people who can, seem really concerned in showing their money and their bohemian lifestyle. Supermarket trolleys are so small that they appear ridiculous to a westerner. For example in Rimi, an expensive hypermarket chain available in the old town, well dressed Latvians load their carts with few, counted treats and cross the store in a hurry, reaching the cashiers and their short conveyor belts. 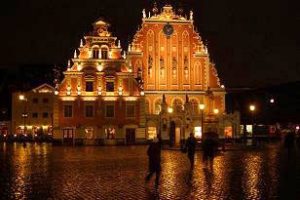 One way or the other, all the people I met in Vecriga (as the historic center is called in the indigenous language) were busy with their hi-tech mobile phones or lost in front of their laptop screens, surfing on the Internet through the Wi-fi network supplied by almost any coffee shop and restaurant. Even though the luxury megastores can appeal with their charming shops and beautiful showcases, I preferred to go everyday to the daily market hosted by former zeppelin hangars, near the train station. There it was impossible to find electronic devices, jewels or Armani suits, but I breathed the authentic Latvian atmosphere: the smell of the local food, typical artifacts on the booths such as gloves and candles, and Latvian gossip in the background.

Soon after the sunset of my first day in Latvia, I started thinking about dinner. I avoided all the tourist-targeted restaurants suggested by my travel guide and looked around, gazing through the windows of numerous pubs and restaurants, especially those located in secondary streets, until I found the right environment which suited me. In this manner, and completely trusting my insight, I stepped into the Hanza, a cozy bistro that serves good beer, wine and some typical dishes. The smell of pancakes, dill, pommes frites and pork meat was irresistible. Latvian cuisine is simple but heavily tasty. A gorgeous English-speaking waitress took the orders. I was the only tourist and the place was crowded with Latvians. I enjoyed the food and some live music; the rest of the evening flowed smoothly and pleasantly. 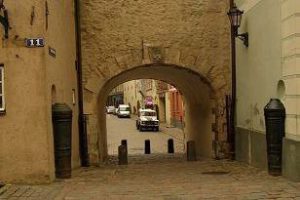 Three days are more than enough to visit Riga. Whether you like museums or discos, historical places or shopping centers, long walks or lazy afternoons spent in comfortable tea-room, Riga will appeal to you. Besides the Cathedral, St. Peter’s church is worth a visit, because you can take a lift to climb onto the highest tower of the city, from where the view is amazing (the steeple rises to a height of 123.5 meters). Just out of the center, it is possible to visit the interesting Art Nouveau district or the Orthodox Cathedral, built between 1876 and 1884. The latter is in good shape and it is reminiscent of Russian architecture. Five impressive cupolas catch everyone’s attention, while several nice icons, painted walls and ceiling frescoes make it very beautiful inside.

If you like museums, the one dedicated to the occupation of Latvia is not to be missed. 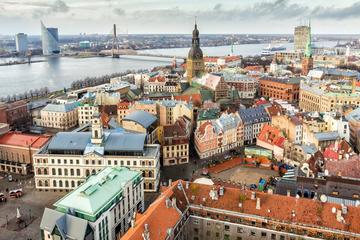 Riga international airport. Many low cost airlines connect the Baltic capital with several European cities.
Baltic Times – News about Latvia and the other Baltic nations.
Museum of the occupation of Latvia.
The Brothers Grimm story about the Bremen Town Musicians.

About the author:
Giuseppe Raudino graduated in Communication Science from the University of Siena, Italy. He lives in the Netherlands, where he works as a freelance writer. Besides traveling and writing, he holds a black belt in karate and plays the trumpet. His web page is at www.raudino.webs.com

All photos are by Guiseppe Raudino.