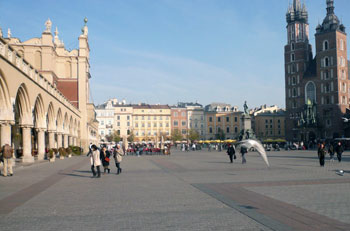 The seconds ticked by until the massive tower clock of St. Mary’s Basilica in Krakow’s Old Town Square (the Rynek Glowny) struck twelve. Our cameras were ready. A bugler appeared in the tower window. For ten seconds he blew his best before abruptly stopping. Legend has it that his 14th century predecessor was warning Krakow of an approaching enemy, when an arrow slammed into his neck. The bugler waves and disappears before repeating his performance in another direction. Twelve local firemen on twenty-four hour shifts perform this civic duty.

Krakow’s Rynek Glowny is the pulse of the city. A self-appointed citizen who calls himself, Pawl Jan (Paul John), appears on the scene in his Magyar/Tartar uniform. His heavy fur hat and gold-buttoned red velvet vest (plus matching culottes) are topped off by a long fur coat. A three-foot long curved sword along with a pistol accessorizes his outfit. Naturally a flowing moustache is in place. Of course, we had a photo op with him. (Pawl Jan has a counterpart in Warsaw’s Old Town Square named Wario.) 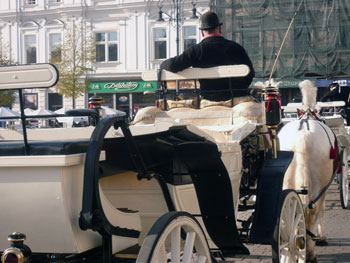 The main function of the Rynek Glowny through the centuries has always been commerce. During Krakow’s early history, citizens were not allowed to sell goods on the street, only in the Rynek Glowny. It is still surrounded by old brick buildings (kamienica) and palaces, almost all of them several centuries old. The first plans were drawn up in 1257 and have been retained to this day.

In 1038, Krakow became the capital city of Poland. The city was destroyed two hundred years later by the Mongol invasion. The Rynek Glowny was rebuilt in 1257; in the 13th-century it was Europe’s largest market square.

Unlike Warsaw, Krakow was not destroyed during World War II, mainly because the Nazis had set up headquarters there. Therefore, the Rynek Glowny looks pretty much the same as it did in the 13th century. 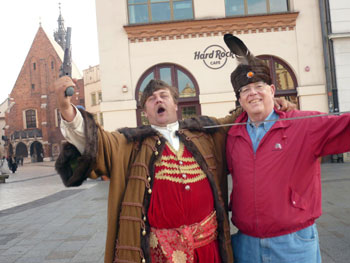 Even though it was November, the venders on the Square, were holding court amidst the yellow umbrellas and tables. Outdoor eating was in full swing. A young man popped up in front of us and handed us a list of his restaurant specials for the day. There is no problem if it is a chilly day, the heat lamps are simply turned on. Should the temperature really drop, blankets are brought out.

Krakow had two sets of city walls in the 14th century plus a moat ringing the city. There were so much pillaging and plundering that all the fortifications were rendered useless. Besides the moat had a most terrible smell. At the beginning of the 19th century, Krakow’s Senate decided, Enough! They pulled the Walls down, got rid of the moat and planted a park around Krakow. Today it is a great place for strolling and picnics. 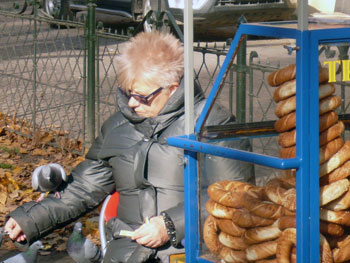 If visitors tire of walking around the Rynek Gwony they can simply seat themselves at one of the numerous outdoor cafes and view the relics of history around them. One side is taken up by the many arched Cloth Hall (Sukiennice) It is considered the world’s oldest shopping mall, The present Renaissance structure dates from 1555 and features in its interior many food stalls, small shops, terrace cafes and flower stands The two-storied structure is a bonanza for souvenirs, handmade Polish crafts and stalls of flowers. The Gallery of 19th Century Polish Paintings is an interesting find on the upper floor. If you get tired, another café is just around the corner. Items tend to be more expensive here than in the Rynek Glowny itself. 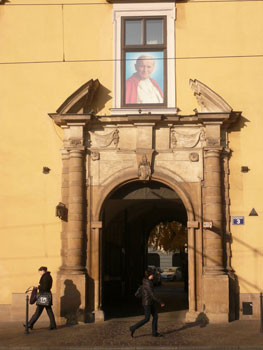 After ordering bowls of cabbage soup (with sausage) my husband Kent and I settled ourselves under one of the heat lamps to take it all in.. Sipping and people watching is the norm. Nuns in habits rounded the corner, while across the Square stood a line of buggies and horses patiently waiting for fares. Their drivers were perusing the daily newspaper. School children, wearing neon vests, filed by led by their teacher. The pretzel and cotton candy sellers were doing a brisk business with pigeons busy picking up crumbs on the cobblestones, Outdoor art exhibits added to the flavor along with impromptu musicians.

After lunch, we wound our way over the two blocks to 16 Kanonicza, the residence of Pope John Paul. Above the door was a giant photograph of the Pontiff. Here, he would often lean out the window to talk to passers by. Inside there’s a massive courtyard with a statue of the Pope in the center. A photograph gallery of his life circumvents the courtyard.

It is worth the time to take the twenty–minute walk (or take the #7 or #13 tram) from the Rynek Glowny to Kazimierz to further extend your knowledge of the town’s fascinating history. Here are the remnants of the 14th-century fortifications and the medieval Kazimierz with its ancient synagogues. Until the 1880 Kazimierz was an island, forming the Jewish quarter of Kracow. In the Second World War the entire Jewish community of 64,000 individuals was deported to the nearby concentration camps at Auschwitz; only 6,000 returning at the end of the war. 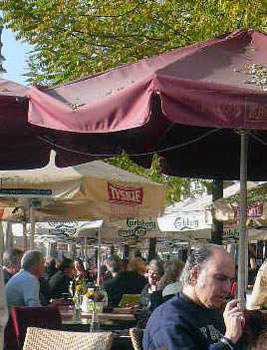 Today Kazimierz is mainly a blue-collar neighborhood. With communism’s fall, Kazimierz has changed beyond all recognition. Buildings such as art galleries and cafes have been renovated and museums opened. There has also been a reawakening in the importance of the Jewish settlement in Krakow. The film, Schindler’s List, was largely shot in Kazimierz in spite of the fact that very little of the action historically took place there.

After our sojourn to Kazimierz, we ventured back to the Rynek Glowny and had dinner at a delightful restaurant, the Wesele. (the wedding) It reminds you of an old country inn. The prices were moderate for a restaurant on the Square. I had zurek (sour rye soup) followed by goulash in a bread bowl. It was superb and the perfect way to end a perfect day.

In 1978 UNESCO entered the whole of Rynek Glowny in the list of world cultural heritage. 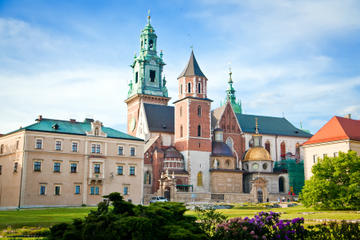 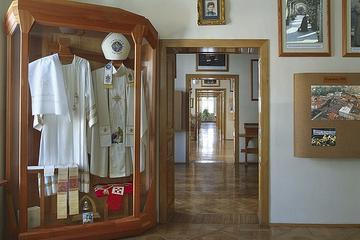 In the Footsteps of John Paul II from Krakow

About the author:
Wynne and her husband Kent have been traveling for many years. They met in Berlin in 1967; Kent was with the US Air Force and Wynne was teaching at the base school. Wynne has a master’s degree in adult education and teaches ESL at a Chicago community college.