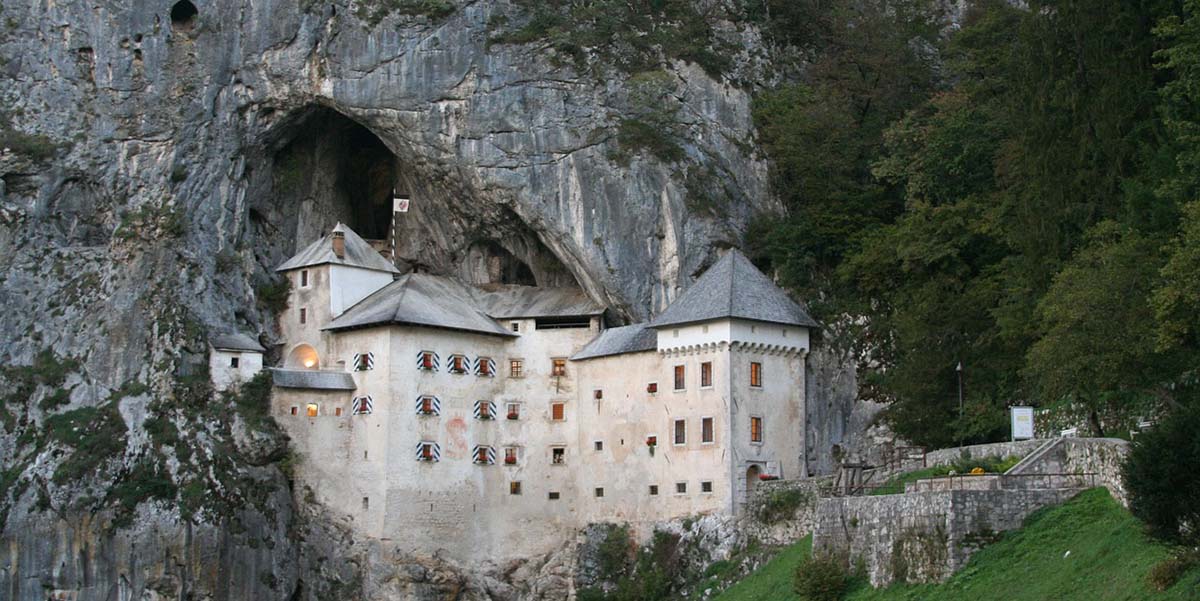 Deep in the earth’s womb, there is a secret which Slovenia has kept for millions of years.

Suddenly, 200 years ago she allowed one of her inhabitants, Mr. Luka Cec, to glimpse into her mystery.

In fact, people have been aware of the Postojna Cave’s existence since the 13th century, but the first visitors were able to see it in 1819 and they were able to see only about 300 meters of the cave. However, nowadays, visitors can see about 5 km of paths.

As the story goes, Luka Cec was a poor worker – lamplighter, who during the spring of 1818, worked on preparing the Postojna Cave’s Great Hall for the Austrian Emperor’s visit. One day he disappeared and didn’t come back so after a while his co-workers considered him lost forever. Fortunately, though, after some time, he showed back up and exclaimed “Here is a new world, here is paradise!” Luka Cec actually, discovered a new cave and the most beautiful part of the Postojna Cave overall. He had not been credited for his discovery for the several decades however, probably based on his poor origin. Officially, the discovery of the cave was credited to the Postojna district treasurer – von Lowengreif. Finally, in 1854, Luka was mentioned as one of the Postojna Cave discoverers. After the discovery, Luka sent a letter to the Emperor asking to be recognised as a lifelong member of the cave guide service, based on his contribution to the cave’s discovery. However, he was denied.

Nevertheless, Luka Cec continued his work and exploration of the cave, proving wrong the scientific opinion that there is no life in the cave. He was the first one to discover the cave’s slender-neck beetle.

There is not much information about Luka and his life, but we know that he was born in Postojna on Oct 11, 1785 and worked as a lamplighter in the cave until his death in 1836. He had never received any real recognition for his contribution of the Cave’s exploration, but we know that he built the foundation for the karst exploration and karst tourism in Slovenia. 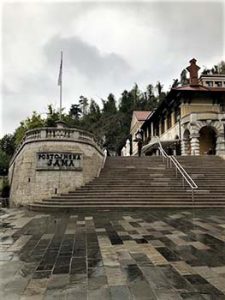 The Postojna Cave is one of the largest in Europe with approximately 24 km of underground paths and impressive halls. Its age is estimated at 2 million years old and it takes about 30 years to produce 1 mm of stalactite which is what the cave is mainly made up of. 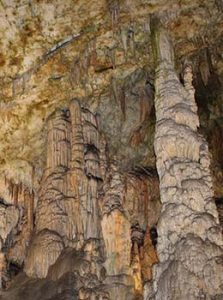 In the period of last 200 years since the time of its major discoveries, more than 39 million visitors have seen the cave and enjoyed the wonderland of the stalactites and stalagmites.

Unforgettable rides by the electric train and walking the path opens up to an unexpected mystery world where acoustics allow you to hear falling water drops. Almost 150 years ago, the Postojna Cave was the first cave in the world to have an electric train to show the beauty of the underground world with a minimum impact on the natural environment.

If you are lucky, you will have an opportunity to hear a concert performed in the Concert Hall of the Cave. It just so happened that our vising group was in luck that my daughter was willing to sing an operatic Aria for us, to prove the Hall acoustics. It was an amazing experience. 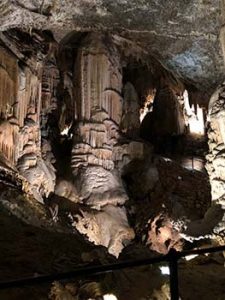 Walking through the ice halls or looking up to the naturally decorated ceilings, you feel the power of nature that has been creating this masterpiece for millions of years. You could see several meters tall pillars and among them a 5- meter tall Brilliant stalagmite, the symbol of the Cave.

The Cave is alive; there is a life in this dark and shiny world. More than 150 different species live in this underground world where the temperature is approximately 10 C year- round. Among the most popular is an endemic baby dragon also known as the human fish that lives in the cave ponds and lakes. Even the famous Charles Darwin in 1859 wrote about these unusual creatures in his work “Origin of species”. The baby dragons could survive for 12 years without food and could live up to 100 years old.

The Postojna Cave offers another unique attraction to visitors. By the end of your walking tour, you will see the only underground post office in the world from where you may send a postcard to your friends or relatives. The cave’s post office was opened at the end of the 19th century. It was the opportunity to send proof to your friends that you were there and had seen it all. In 1900, the post office handled 7000 postcards. This post office is still operating as a romantic memory of the old times. Of course, nowadays we mostly use Instagram or other social media to make our friends jealous about our unique trips and travels but it is still nice to know that it is there and we can go back to a simpler time while there and marvel in its wonder.

Visiting the cave, learning about the way and time how stalagmites and stalactites were created or seeing the underground exhibition about the Cave is an interesting and exciting experience for the whole family. Young or old, you could experience this mystical world, feed your adventures’ spirit and have quality time with your loved ones. Even visiting the cave again after some time wouldn’t leave you unimpressed. I was there for the first time with my parents when I was only 6 years old and finally again 40 years later. It was so exciting and such a memorable event that I couldn’t stop talking about it. As a child, I was mostly impressed by the opened electric train and the fact that it was cold even though outside was a hot summer’s day. At that time, visitors were offered long warm coats to protect them from the cold, which was also interesting for the 6-year old kid. In present times, this is not necessary because it doesn’t matter where you come from, you can check the Internet and find out all the useful information you need before you deciding to visit. So, you can bring your own jacket or sweater.

When you purchase your ticket and get to the entrance, you will be prompted to join a group and a guide as per your language preference, from native Slovenian, English, German, Italian, Spanish, Russian, Japanese, Mandarin etc. You will then be led to the platform, now called the “Luka Cec” platform, where you will enter the electric train and your adventure will begin. 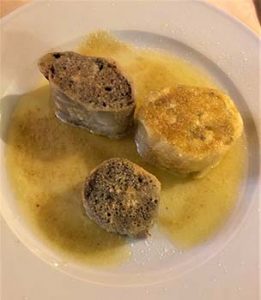 If you need to wait a half an hour or an hour for your entry time, however, you will have an excellent opportunity to visit one of the restaurants or cafes conveniently located just before the entrance to the cave. We decided to have a coffee at the café. Then we thought, why don’t we have a desert with our coffee? Never a bad decision! The kind waitress suggested the Slovenian sweet “strukle” cake. The plates came each filled with 3 pieces of the sweets made of cheese, walnuts and covered with the caramel sherbet. What can I say – it was delicious! So, our half an hour was not wasted at all.

After visiting the cave, you can do some souvenir shopping as well and then visit the Predjama castle on the hill, the world’s largest cave castle. There is a legend about the castle and its owner, something like the Robin Hood of Postojna. The rest of the story you will hear when you get there!

You can easily spend a whole day in the area, from visiting the cave, exhibitions, seeing the castle and enjoying delicious local food, you definitely won’t be disappointed. Even if you are spending your vacation in neighbouring Croatia on the coast or one of the Kvarner islands, as we did, you can rent a car from the city of Rijeka or Opatija and drive to Slovenia. It is only about a 65 km drive and you will find yourself in the town of Postojna. We picked one rainy day when sunbathing was not an option and spent a marvelous day in Postojna.

Before you go: check the website to get more details (direction, tickets or other useful advice)

Plan to spend a whole day there, but if you want to see only the cave, count for 2-3 hours

If you don’t like to drive, you may take a bus from the capital city of Slovenia, Ljubljana or some other locations in Slovenia or Croatia

Make sure that you wear comfortable, flat shoes since it is a quite of walk on foot along the paths in the cave

Sonja Slijepcevic is a freelance travel writer and photographer, a member of the International Travel Writers and Photographers Alliance (ITWPA), who for years has been combining her love of travel, passion for photography and professional career in the project management field. She likes meeting people from different cultures and backgrounds, enjoys history and art, and likes to write about these experiences. Some of her photography and articles have been published in different Canadian magazines and newspapers such as Travel Thru History  or Wanderous Affair. She was born in the capital city of Croatia, Zagreb and has been living in Canada for 28 years.

All other Photos by Sonja Slijepcevic