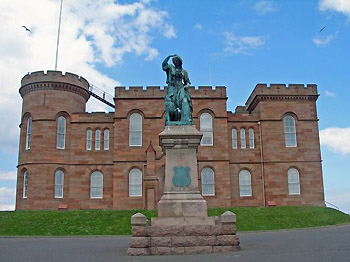 The Scottish highlands are rugged mountains, thick forests and lush green glens. Overcast skies, cold blustery winds and thick mists add a haunting quality to the region. In this environment, the supernatural doesn’t seem so outlandish – it is almost expected.

When Shakespeare first presented the Tragedy of Macbeth to King James I in 1606, he was well aware of his majesty’s fascination with witchcraft. The bard piqued Scottish King James’ interest by incorporating a highland setting and the supernatural into the plot.

No one disputes that the play is a literary masterpiece but it is historically and geographically inaccurate. While the fictional Macbeth will be reviled as long as Shakespeare’s play is performed, the historical Macbeth was actually no worse than any other Scottish King that preceded him. Clearly Shakespeare did not let history stand in the way of a good story.

The intriguing highland locations are still as spell-binding as in Shakespeare’s time. You can relive the play in person by visiting each sight. But you will require some imagination as they look nothing like what you might expect.

Start with the three witches in Forres. The coastal city of Forres is notorious for its history of witch hunting. Here visitors will find the “Witch’s Stone”. This stone marks the remains of a barrel used to execute witches.

In times past, a woman accused of witchcraft in Forres was imprisoned inside a barrel and rolled down Cluny hill to her death. If she survived this ordeal, spikes were driven through the barrel wall. If she survived, she was burned at the stake. There was no innocence or reprieve.

In the play, Duncan’s palace was located in Forres. History records that a flat-topped mound known as Castlehill had been the site of a “Royal Palace” since 900 A.D. and that kings resided there. Nothing suggests that Duncan was one of those kings however.

Castlehill was strategically important. From its summit, defenders had a clear view of the sea to the north and the lands to the south. Now this hilltop is a city park containing an obelisk known as the Thompson Monument (dedicated to a Scottish surgeon who served in the Crimean War). Remnants of the castle still occupied the site when the park was first laid out. 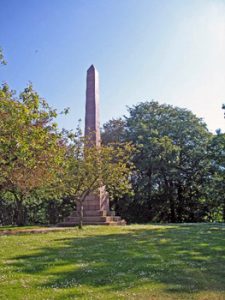 One might imagine stone fortifications, towers and a solid wooden draw bridge. The grandfatherly King Duncan is seated upon a throne as he receives news of Macbeth’s victory over Sweno and the traitorous Thane of Cawdor. Colorful banners and elegant tapestries soften the cold, rough stone walls surrounding him.

This castle scene does not reflect the Viking Age however (Sweno was a Viking in the play). In reality, Forres Castle was constructed of wood.

While in Forres, you can visit Sueno’s Stone. Sueno’s Stone is a 23-foot tall menhir covered in indecipherable Pictish writing. Scholars have suggested that this menhir may commemorate a battle over 100 years before Macbeth between Kenneth MacAlpin’s army of Scots and the rival Picts. Perhaps Shakespeare had this battle in mind when he chose the name of Sweno.

The present brown sandstone Inverness Castle, built in 1834 as a court house, is closed to the public. This structure occupies the site of a much earlier wooden structure dating back to the time of King David I in the 12th century. (Castle photo is at the top of story.)

Visitors will enjoy the turreted castle exterior and the panoramic view of the area from the hill top. Remnants of an even earlier fortification, dating to the time of Macbeth, were discovered in the private garden of a house appropriately named “Dun Macbeth” on nearby Auldcastle Road. Strategically Auldcastle Road, on a hilltop, was an ideal location for a castle because of the commanding view of the water below.

When I visited Auldcastle Road, local residents were either unwilling or unable to identify Dun Macbeth. Furthermore, there was nothing to suggest that this neighborhood was of any historical significance whatsoever.

Visitors should note that no record indicates that the real King Duncan was murdered at Inverness. However, some people claim to have seen his ghost walking along the banks of the River Ness in full royal dress. 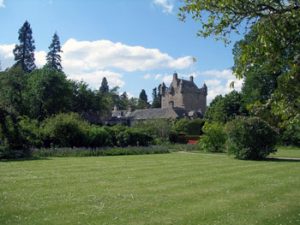 Cawdor Castle is associated with Shakespeare’s play because Macbeth was granted the title of “Thane of Cawdor” by a grateful King Duncan. A storeroom just beyond the main entrance to the castle builds upon this link. Here visitors find a cauldron topped with a model of the castle.

While the Cawdor area has been a thanedom since 1236, it does not date to the time of Macbeth. Furthermore, the existing castle was constructed in 1454. Despite the lack of any genuine association with Macbeth, Cawdor Castle is worth touring because of its fine furnishings and well-manicured gardens.

The tower room is of special interest. Inside is a trap door that falls open to a hidden dungeon. This dungeon was reserved for uninvited guests but you are in no danger as long as you have your admission ticket.

A tour guide informed me that there had been an earlier castle, dating to the time of Macbeth, situated approximately 1.5 miles north of the present Cawdor Castle. This unmarked site is located at a bend in the road near Rosefield, close to an abandoned airstrip. Any remnant of that castle has long since been washed away by flood waters from the River Nairn. 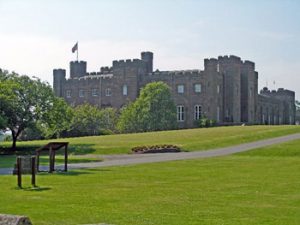 With the murder of King Duncan, Macbeth travels to Scone to be invested as King of Scotland. The play only refers to him as traveling to Scone. No details are given, so let’s fill them in. To be invested as king, Macbeth would climb to the top of Moot (“Boot”) Hill, just outside present day Scone Palace, and seat himself upon the “Stone of Destiny”.

During the coronation ceremony, the new King would also accept oaths of loyalty from the Scottish Nobles in attendance.

Tradition required these Lords to swear allegiance to the King upon their own lands. Since it was too dangerous for the King to travel around the country to receive individual oaths of loyalty, the Lords carried samples of their own soil to Scone in their boots. When it came time to swear their oaths, they would dump the soil on the ground and kneel before the King. Thus Moot Hill is actually a transplanted mound of earth. Its size grew over the centuries as more and more soil was added.

Macbeth noted that Macduff, the Thane of Fife, was not present at Scone to swear his loyalty. Instead Macduff, who had remained steadfastly loyal to King Duncan, was en route to England to meet with Malcolm (Canmore). 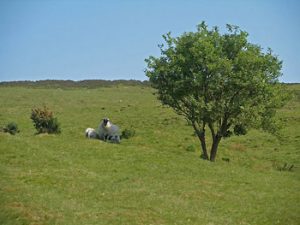 Visitors to Scone Palace may ascend Moot Hill and seat themselves upon a replica of the Stone of Destiny. The real Stone of Destiny, a 336 pound red sandstone slab, is displayed at Edinburgh Castle.

The palace and gardens are also worth visiting even though there is no association with Macbeth. Of particular interest is the Corridor of Kings where visitors find pictures of some notable Scottish monarchs including Macbeth.

Malcolm, with English support, leads an army to Scotland in a bid to take the throne from Macbeth. The army, camped at Birnam Wood, prepares to march on Dunsinane under cover of tree branches. Even now locals will tell you that Birnam Wood is visible from Dunsinnan Hill (Dunsinane). Therefore any army advancing on the hill would still require camouflage. 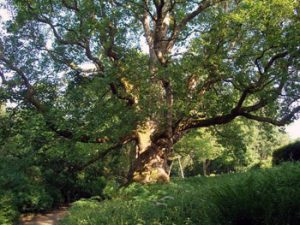 After a leisurely walk through Birnam and along the river bank, visitors may wish to enjoy a drink in one of the local pubs before heading for Dunisnnan Hill.

The outlines of two Iron Age wooden hill-forts lie atop Dunsinnan Hill. The more recent inner fort could date to the time of Macbeth. Tourists and invading armies must climb a steep hillside pasture to reach the summit of Dunsinnan Hill. Visitors immediately realize that there is no level ground for two armies to fight a pitched battle on Dunsinnan Hill. Any battle would be a siege instead. However, in the play, the two armies clash and Macbeth is slain at the hands of MacDuff. With the defeat of Macbeth, Malcolm claims his birthright as King of Scotland.

You may justifiably ask “What is the impact of Shakespeare’s play on our perception of the real Macbeth?” One answer is to be found in the Great Gallery of Holyroodhouse in Edinburgh. On its walls hang portraits of 94 of the 110 real and legendary Kings of Scotland. The real Macbeth reigned as King of Scotland from 1040 to 1057; his portrait is one of the 16 that is missing. Coincidence? Ironically even Bonnie Prince Charlie’s picture is displayed. 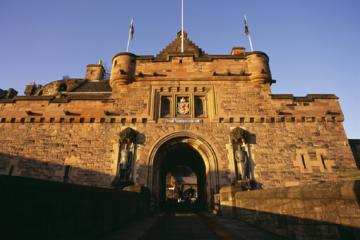 The Witch’s Stone is located on Victoria Street in Forres, about 500 yards west of the Findhorn Road intersection. The stone is embedded in a low lying meridian at the center of the road.

The site of Forres Castle is located at the southwest corner of Castlehill Road and High Street in Forres. Look for the obelisk known as the Thomson Monument.

Sueno’s Stone is located on Findhorn Road in Forres. Traveling east, the stone is enclosed in a glass building on the left side of Findhorn Road, near the intersection with Victoria Street.

Cawdor Castle – take the Culloden exit from Highway A9 south of Inverness and follow signs to the castle which is approximately 4 miles west of Nairn.

Scone Palace lies just north of Perth on highway A93.

The Birnam Oak is in the town of Birnam (on the south side of the River Tay, opposite Dunkeld). The oak is situated 430 yards behind the Birnam House Hotel.

The Palace of Holyroodhouse is at the east end of the Royal Mile in Edinburgh.

Edinburgh Castle is at the west end of the Royal Mile.

Scone Palace, the Palace of Holyrudehouse and Edinburgh Castle may all be visited by using the Great British Heritage Pass http://www.thebudgettravelstore.com/page/234746205

Plan your vacation at www.plan-a-dream-trip.com

About the author:
Troy Herrick, a freelance travel writer, has traveled extensively in North America, the Caribbean, Europe and parts of South America. His articles have appeared in both Live Life Travel and International Living Magazines. He also penned the travel planning e-book entitled “Turn Your Dream Vacation into Reality: A Game Plan for Seeing the World The Way You Want to See It” based on his own travel experiences over the years. www.thebudgettravelstore.com