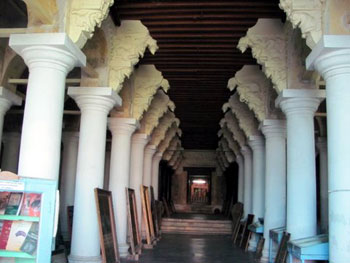 Kings and castles may seem to belong to a forgotten era. Yet I have always been keen on exploring old forts and ruined palaces. When I moved into the quaint town of Ramanathapuram in South India, an old palace that silently adorns the market square was the first landmark to catch my attention. This keepsake belonging to the Sethupathy Kings lured me and I soon made a visit to take a look at the treasures within its aging walls and get acquainted with an ancient dynasty. The descendants of the Sethupathy Kings had handed over the palace, its adjoining grounds and artifacts to the care and control of the State’s Archaeological Department years ago.

I was excited to walk through the magnificent archway leading into the palace. This old structure had elaborately constructed rooms, look out posts and balconies. Safety was of prime importance to the monarch ‘Kizhavan Sethupathy’ who constructed the palace. Consequently he installed 44 cannons around the palace, not to forget the strategically placed guard posts and watch towers. During its glory days, there was also a huge trench of water around the palace that acted as a barricade to keep away intruders. Most of these reinforcements were completely demolished by British invaders in later years. 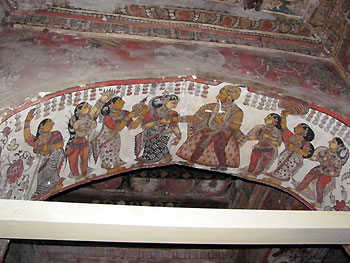 The palace gates opened into extensive grounds with the remains of a once beautiful fountain straight ahead. Beyond this was ‘Ramalinga Vilasam’, the grand abode of the Sethupathy Kings who ruled almost one fifth of Tamil Nadu, South India from 1601 to 1948 AD. A temple built by the Kings of this empire in honor of their family deities can be seen on the southern side and still functions as a place of worship. Ascending several stone steps, I entered the royal dwelling. A small section on the right has been converted into a ticket counter and paying a small fee, I commenced a tour of this fort.

The Durbar Hall, where I stood had two rows of stately pillars which led up to a pedestal. In former days, the King and his council of ministers met on a day to day basis in this Hall with the royal throne set up on the pedestal. Though deprived of the seat of honor, the pedestal stood distinctly prominent. Full length portraits of Sethupathy rulers are now on display on all the pillars leading up to the pedestal, as if to welcome visitors to take a look at their majestic lives. Standing at the entrance of the dark and damp Durbar Hall, my imagination conjured scenes of royal conventions that must have taken place at this spot through the centuries. Incidentally, this Hall also witnessed the historically significant confrontation between Veerapandiakattaboman (a South Indian King of a neighboring province) and the British Official, Jackson. 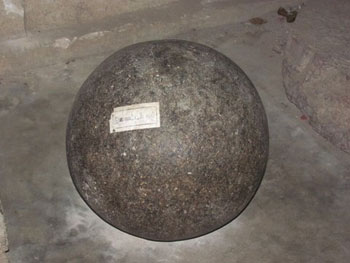 The biggest merit not just to the Durbar Hall but the entire palace is the murals that span across every inch of the walls and ceiling. These indelible prints have braved the ravages of time and stand a colorful reminder of the life of the Sethupathy Kings. They narrate stories of love and war, courage and devotion. The walls of the Durbar Hall portray the King’s war triumphs among others. Several relics from the past are on display in this Hall. Pieces of armory like swords, spears, daggers, rifles and knives which have rusted in time and deprived of use have been showcased as a reminder of the Kings’ valor and bravery. 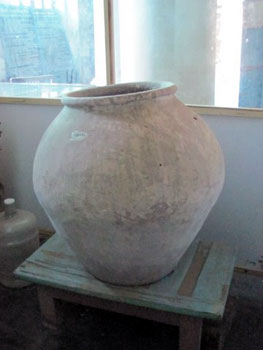 The Durbar Hall also houses antiques that bring to light the strange customs and practices that were in vogue during the reign of the Sethupathy Kings. I was fascinated by a gigantic stone ball that weighed a ton and a massive mud pot. The purpose of the stone ball was to test the strength of a prospective groom in days gone by. Only those young men who could fling the mammoth ball over their shoulders qualified for wedlock. An impossible feat for grooms of today! The mud pot or ‘Mugavai Thali’ on the other hand is a reminder of the gruesome ancient practice of burying the aged alive when care became impossible. I shuddered looking at the harmless mud pot which was actually a coffin from the past!

A carefully preserved three dimensional picture was the next to capture my attention. The first time I saw this frame, I passed by not thinking much of the blurred image of an elephant. However, only when the curator asked me to look at the picture from the left and right, did I unearth the secret of the image which magically transformed into a tiger and then into a lion. The skills of the artisans of this old kingdom mesmerized me. On the southern end of the Durbar Hall, I found the ‘Abisheka Peedam’ or seat of anointment where the King and his Officials were appointed for their sacred duties. Examining the exhibits of royal seals, palm leaves and steel plates engraved with ancient writings, numerous sculptures and black and white pictures, I completed my trip of this elegant Hall. 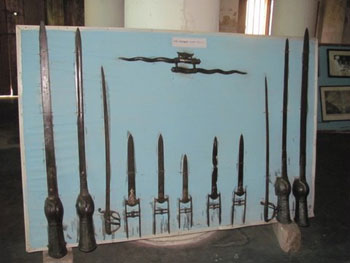 The Sethupathy Kings are renowned for their religious fervor and this can easily be seen from the mural depictions and the prominence to deities just beyond the Durbar Hall. The walls of the sanctum here mostly talk about Hindu scriptures and the King’s zeal in adhering to them. Though serene in its settings, this hall holds a secret that can easily escape the naked eye. Hidden behind the deities is a secret escape route that was elaborately constructed to lead into seven South Indian temples. Though the tunnel tingled a sense of adventure and evoked my curiosity to look in, this was impossible as much of the passage had caved in.

This seemed to be the end of ‘Ramalinga Vilasam’ but I was surprised when the curator brought out a bunch of keys and led me to the Northern corner of the sacred Hall. Here I found camouflaged stairs that led into the personal dwelling of the King. The narrow stairs opened into another grand Hall with several rows of pillars and innumerable murals depicting the lifestyle of the Sethupathy rulers. Hidden among floral patterns, scenes of the King reposing and dining with his wife and concubines and pictures of dancing damsels are depicted in the frescoes on the walls of this Hall. It is believed that the Sethupathy Kings had as many as 40 concubines. Adjoining this hall is a wide terrace with two guard posts.

From the King’s personal apartment, another staircase leads on to the level above. I was delighted to note that a palace built in the 16th century actually had two levels. The second level revealed the King’s look out post with a huge stone throne. The Sethupathy Kings spent their evenings here, scouting their empire from this pedestal, looking for possible signs of invasions. From this vantage point, the entire town of Ramnathapuram is visible. It was indeed a treat to sit on the stone throne and feel the pulse of an anxious king, eager to protect his kingdom. The rear side of the palace can be seen from here and the vast stretch of palace grounds behind ‘Ramalinga Vilasam’ took me by surprise. There were several ruined rooms built in the same architectural pattern as the palace. I learnt that these rooms were the living quarters of the King’s many concubines.

My visit to ‘Ramalinga Vilasam’ which ended here was full of surprising discoveries. Understanding the customs and rituals of the Sethupathy Kings was a memorable experience. This fort is a treasure chest not just for Historians or Archaeologists, but even for a lay person who will find himself enwrapped by the wonders of ancient architecture, lifestyle and heirlooms. The size and splendor of this colossal structure can never be understood by a casual glance. However for those who dare to venture beyond the enormous archway of the palace, ‘Ramalinga Vilasam’ unfolds itself in whimsical grandeur. 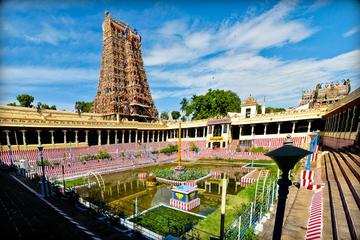 Athens of the East, A day Spend Touring Madurai

About the author:
Preena Deepak Samuel enjoys exploring the history behind ruined forts and ancient palaces along with her family. She worked as a content writer before deciding to pursue her dream of freelancing. Preena finds time away from work to read, write poems, travel and cook. Her blog is at: http://www.justwhatisay.wordpress.com

All photos are by Preena Deepak Samuel.