A War Was Fought In This Peaceful Canyon

A hawk soars far overhead as the train leaves the little town behind and enters the canyon once known as the Grand Canyon of the Arkansas. Cholla cactus bloom bright yellow along the tracks. Except for the river itself, all is quiet. No highway invades the canyon, and the only people along the line are riding rafts or kayaks down the Arkansas River or enjoying a bit of fly fishing after a long hike. 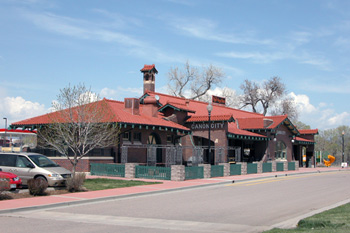 As the vintage blue and white train climbs upstream following the banks of the Arkansas, the canyon walls grow ever closer and higher. Soon a fragile looking suspension bridge comes into view high overhead. It spans the width of the canyon from north to south. From the unobstructed view of an open railroad car, passengers can actually see light between the wooden boards that form the deck of the bridge.

A funicular railway brings people down from over 1000 feet above. Its tracks descend at a 45 degree angle with two cars balancing each other as one goes up and the other down. From the train an Alpine like cable car is also visible spanning the canyon near its top. Most people who visit the Royal Gorge see only this part of the canyon and often just from high above where the Royal Gorge Bridge & Park has been one of Colorado’s most popular tourist destinations for over 75 years. 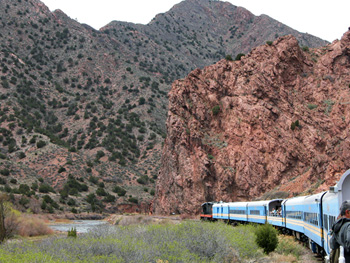 Beneath the suspension bridge, the canyon is so narrow and the walls so steep that a place for railroad tracks seemed impossible. The river simply must occupy the entire canyon bottom. But in 1879 a “hanging bridge” was devised and built to allow the tracks to pass through the narrow space suspended above the rushing water. This bridge still serves today.

Further up the tracks towards Parkdale, the canyon opens up a little. Many little placements of rocks can be seen above on the canyon walls. These are the remains of forts built to defend the canyon. Old photos show these rock forts bristling with men and rifles.

A war of sorts was fought in this canyon. Armies were recruited, crude forts were built, and there was much brandishing of weapons. 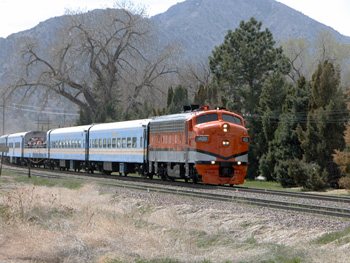 It wasn’t a Civil War skirmish; the only one of those fought around here was at Glorietta Pass just south of the New Mexico border. This was a war for territory between two railroads: Colorado’s “baby road,” the narrow gauge, Denver & Rio Grande, and the big, standard gauge, Atchison Topeka & Santa Fe. But, many of the men involved had been soldiers in that bloody war: quite notably the D&RG’s president, General William Jackson Palmer.

In February of 1878, the Santa Fe had grabbed Raton Pass from the D&RG mere hours before crews were to start their surveys of that route. Only two months later, with the rich prospects of the Leadville mining boom in the daily news, the Santa Fe was attempting to do it all over again in the Arkansas River canyon. Clearly, there was barely enough room for the tracks of one railroad – certainly not two. 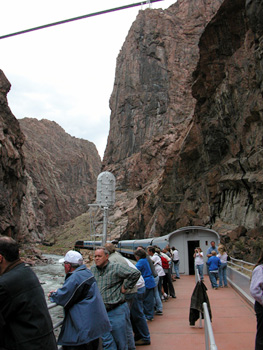 Santa Fe seized the entrance to the canyon west of Cañon City cutting off the D&RG for the second time. The outraged D&RG built forts upstream in the canyon to block the rival’s progress. Both sides recruited men well accustomed to the use of firearms – the Santa Fe brought in Bat Masterson with a crew of men from Dodge City. The resulting standoff was widely known as “The Royal Gorge War”.

Fortunately the battles were fought mainly in the courts – all the way up to the U. S. Supreme Court. In the end, Santa Fe was awarded Raton Pass, while the D&RG received the Royal Gorge route.

For many years afterward, the Royal Gorge was on one of the most scenic of several alternate transcontinental railway routes across the American west. Once the domain of such suggestively named trains as The Scenic Limited and The Panoramic, regular passenger service through the gorge ended July 27, 1967. The last regular passenger trains were D&RGW east bound Train 1 and west bound Train 2 proudly named, “The Royal Gorge”.

In 1999, trains of a new operator, The Royal Gorge Route Railroad, renewed service along the route. Trains travel twelve miles through the canyon as far as Parkdale and return to Canon City two hours later. The railroad operates year around (except for January) with more departures available during the summer peak season. Classes of service available include basic coach class, club class and various dining car options. Except aboard the special murder mystery, dinner trains, all is peaceful and quiet along the line, and the scenery is still as grand as ever.

My own memories of the Royal Gorge railroad go back to 1958 when I photographed a train at the bottom of the gorge. Denver & Rio Grande Western’s Train Number 1, The Royal Gorge, arrived and stopped just beyond the hanging bridge. It was a long standing tradition on the D&RGW to stop all passenger trains at the bottom of the gorge so that passengers might get off and enjoy the exceptional view. A concrete platform was provided for just that use. 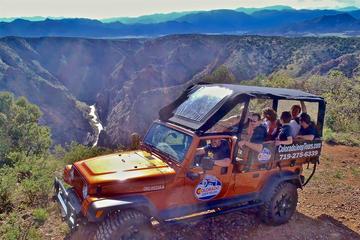 ♦ Lots of information on dining, lodging and other things to do in the area may be found at: www.canoncitycolorado.com

About the author:
Glen Brewer’s previously published travel and features have appeared in Travel Thru History, The Chicago Tribune, The Denver Post and the Vancouver Province. For more info: RailroadGloryDays.com