India is a spiritual place. It is a place where you can allow your vision to be sharpened, to shed your naivety, to peel back the layers and see, for the first time, yourself. Several years ago, I was part of a group of traveling students, who went to experience the culture and offer a hand wherever we could. We visited four different regions in the space of ten weeks and volunteered in different capacities.

Delhi: In early May it is nearing summer here, in the old city of Delhi, India. I am standing in the centre of a square of hotels in a walled community known as the Tibetan Colony on top of a small hill. I am amazed that the floors and stairs of the several story buildings seem to be made entirely of marble. After a shared breakfast of spicy fried rice and eggs, we meet on the rooftop. From there we can see a marshy area where crops are grown outside the walls, with a road crossing a bridge frequented by produce wagons and pedestrians.

It is about 37 degrees out. When the wind blows, it feels like standing in front of an open oven. A few team mates stand with me while we wait for everyone to arrive. The monks in their priestly maroon and gold garments congregate, drinking chai out of tiny clay cups, silently watching us. I wonder what they are thinking; if they are listening, whether or not they understand English.

There are a few sellers that have set up stands in the pedestrian only streets, some with jewelry, some with snacks and bottled water, some with bandanas and CDs and soap and lollipops and a variety of colours of toilet paper. The toilet paper here is kind of like party streamers – rough and colourful. You can’t put it down even the flush toilets – it clogs them. We are not, like the natives, free from this luxury, and continue to buy and use it for the entire trip.

Taking a rickshaw is an adventure in itself. Motorized rickshaws are sort of like tiny, open-aired taxicabs which are cheaper than cars. They can also be made of a small wagon-like sulky and pulled by people, bicycles, or animals.

After a few days I’m still in culture shock and take comfort in the discovery of a McDonald’s at a nearby plaza. Some kids wave to us and we realize that one of our team mates looks just like Ronald McDonald. We take a photograph of him standing in front of the restaurant, holding the McDonald’s flag. 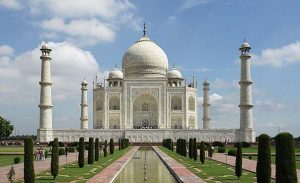 On the second day here our team leaders wake us up at 4:30 am to take a bus to the Taj Mahal. This historical wonder is an impressive structure made of white marble and inlaid semi-precious stones. It was commissioned by the Emperor, Shah Jahan, in 1632 as a tomb for his late wife, who had died giving birth to their 14th child. Its tallest dome stands at 240 feet, and is surrounded by four smaller domes and four towers at the edge of the raised platform on which it stands. The design is unique in that it is totally symmetrical front to back, and side to side.

There is a long walk of fountains in the front, and several red sandstone structures, beautifully designed and almost impressive as the one we came to see. The fountains are empty today: we are told they are cleaning them.

Women in their colourful saris are lined up sitting in the cool of the shade as the sun reaches its zenith in the sky. We ascend several stairs, each time climbing onto another level, getting closer to the mausoleum itself. At one of them, a sign tells us to take off our shoes. The white marble is cool and smooth as fondant in the shade, burning hot as desert dunes in the sun. It hurts my feet. I dash across the hot surface to the cool of the shadow, and there find relief.

Inside are vaulted ceilings which meet in round rooftops above our heads. In the centre is a fenced metal grate, which opens to the tomb that is said to hold the queen’s ancient remains. There are no lights inside, just walls of cool shaded marble. They ask us not to photograph it, because it’s a tomb: a sacred place.

Gujarat: We have no idea why we are here, but something has called us to come. The region has been in a drought for the past two years and nothing grows. Out the train window, the ground is dry and cracked for miles. There was an earthquake here just three months prior, 7.9 on the Richter scale, and as our bus pulls into the region, we start to see some of the damage. Buildings have been reduced to piles of rubble. People mill around these flattened buildings. Some transport supplies on the backs of camels or in wheelbarrows. Desperation hangs heavy in the air.

Even the hotel we decide to stay in has massive cracks in the walls. Some of the guys scout out opportunities and we find out that there’s a doctor who runs a children’s hospital here who is in desperate need of help. She needs volunteers to help her move the makeshift hospital from one set of tents to another location farther away so they can blow up the old building and rebuild. She has already set the date and scheduled the “blast-man.” A team of volunteers was set to come help her out but they cancelled at the last minute. Two other girls and I are sent to prepare the area for the new tents. We sweep up cow dung and level the sand as best we can with our brooms. There is a cow wandering around the site. First we make sure no one’s looking, then we shoo it away.

Over the course of the next two days the hospital in tents is completely moved. We stand on a rooftop and cover our ears to watch the damaged five-storey concrete hospital building crumble to the ground, as the explosives are detonated. 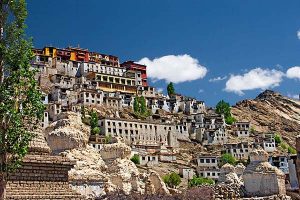 Ladakh: Having previously been covered by an avalanche of snow and ice, we receive word that the road to Ladahk has finally opened. Leh, Ladahk is the highest human settlement in existence, set in the Himalayas, at 18 000 feet above sea level. It takes three days of driving through mountain passes that dwarf even the Coast and Rocky Mountains. The thinning air and cooler temperatures cause some people to have elevation sickness. I start to feel lightheaded and panicky at one point. Others are much worse, especially the native Hawaiian. He’s never been above sea level, or seen snow before. When we stop to play in a glacier that comes up to the edge of the road, he does a little song and dance.

Believe it or not, there is a Moravian school and church there, and we serve them, working with the children in an after school club and in the schools. Being so high in elevation, every step takes twice the effort. Even walking up a small hill after supper feels exhausting. We stay for two weeks, enjoying the cooler weather.

In a few incredible months I have been dwarfed by the largeness of the world several times over. We’ve immersed ourselves in the irascible, undeniable, colourful, indomitable culture. The heat has humbled us. The celebration of the majesty and power of love, colours, inventive foods has been internalized and will live forever in our hearts. Hopefully, we made a difference in India because it definitely made a difference in us.

K. A. Thomsen is a BC writer with an emphasis on historical fiction and poetry. Her first novel, a junior fiction cowboy story set in the Chilcotin wilderness was published in August 2016. It deals with tweens coming of age, issues of land stewardship, First Nations peoples, ranching, and horsemanship. She is married with two children.