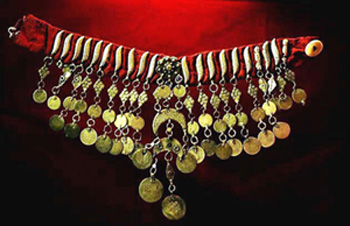 I always wanted to visit the Joe Alon Center – the Museum of Bedouin Culture near Kibbutz Lahav, northeastern Negev Desert (Israel). My wife and I named a date in the middle of the week, avoiding the the Shabbath (Sunday) drivers and off we went. It was a long drive to the center through an area rich in archaeology and scenic beauty with Bedouin encampments along the way.

The Joe Alon Center was founded by the Joe Alon Association with assistance of the Jewish National Fund and various donors to honor the memory of Joe Alon, a pilot of the Israel Air Force. 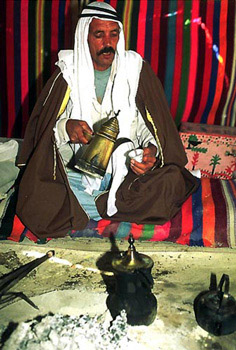 The term “Bedouin”, is derived from the Arabic word ‘badu’ (sing. ‘Badawi’) for the nomadic people of the desert. The name “Bedouin’ means ‘desert dwellers’. The Bedouin people refer to themselves as ‘Arabs’, a term used for desert nomads in the pre-Islamic era. The traditional way of life of the Bedouin is based mainly on herding animals, mainly goats, sheep and camels, and partly on small-scale farming. Among the Bedouin, hospitality and simple, immediate justice are first rules of conduct. The lands through which the Bedouin roam are the vast deserts of the Arabian Peninsula and the adjacent regions to the north (Israel, Syria and Jordan).

A display of a Bedouin man’s dress shows the traditional dress for the Bedouin man, a long robe (‘thob), dish-dash or jallabiya, a wide sleeveless cloak (abtyeh) and the plain or checked headdress, the (keffiya) with head ropes (agal). Feet are shod in open leather sandals. Today many Bedouin prefer the European style jackets to their traditional robe. 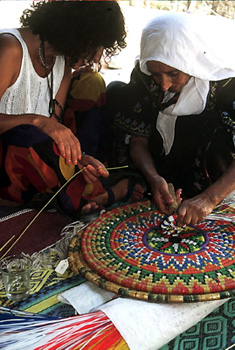 The dress of the Bedouin women is well-adapted to the rigors of the extremes temperatures in the desert, being long and loose fitting and having several layers which provide good insulation against heat and cold. Women’s clothing in various colors denotes the social and martial status, and can indicate the tribe or locality from which she comes from. A Bedouin appreciates her collection of jewelry both for its ornamental valley and as an outward sign of her marital status. (Her jewelry is part of the bride price paid by the groom to her father. The jewelry is entirely her own property.)

At the Center we enjoyed Bedouin hospitality sitting cross-legged under a genuine goat’s hair tent and were served sweet tea in the true traditional manner – with a taste of pita-bread and some Labaneh cheese and olive oil. The tea was prepared by the host over a fragrant wormwood (shih) small fire. Upon the arrival of the visitors tea is brewed in a small kettle and poured into small glass with plenty of sugar. Tea (or coffee) is always poured with the pot in the left hand and the cups in the right hand, according to tradition. The sound of a reed flute is heard invoking in our imagination a Bedouin shepherd passing by with his flock of goats.

The Bedouin tent is ideally suited to the desert environment and to the nomadic way of life. The tent is called ‘baytal-sha’ar’, the house of hair, meaning it is woven from the hair of animals, mainly goat’s hair. When the rare rains pour down in the winter months the weave contracts and don’t let the water in. In the heat of the summer the outside of the tent feels very hot to the touch while the inside remains somehow blissfully cool. One section is the man’s domain where they receive visitors and meet to discuss tribal affairs; the focal point of the men’s section is the fireplace where they keep various utensils for making tea or coffee. The other section is reserved for the women where they prepare food, take care of their children , and where the whole family sleeps. 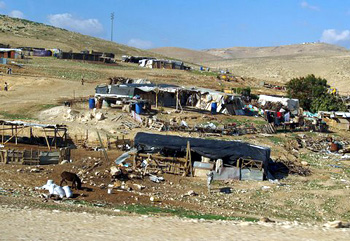 Outside of the magnificent exhibition of Bedouin culture, there are other interesting things to see. An Observation Deck offers a panoramic view overlooking the northern Negev Desert, the scenic Hebron Hills, the Lahav nature reserve and forest, and the broad view of Jewish and Bedouin settlements in the area. The ‘Herb and Spice garden’ contains different plants which are use in traditional Bedouin medicine. The Bedouin tribesmen are strong believers in the benefits of herbal medicine, as this was their only source and hope of finding a cure and getting better when were ill in the vast desert. They have hundreds of herbal cures and medicaments, one of the most popular being mixtures of camels milk. The herbal cures are used for many conditions including stomach and digestive disorders, circulation problems and bone complaints. In addition they have vast knowledge of the desert plants and their curative powers and how effectively these cures have worked on their people. A special wing of the Centre holds a complex of five life size cave models representing caves of varied geological periods and cultures in the area.

The exhibitions of artifacts and jewelry are a marvel:  finely wrought silver and beaded jewelry with some decorated with real coins, men’s personal objects consisting of weapons and smoking items etc. various riding and packing saddles, and cloth decorations for camels, and the tools the Bedouin use for farming and herding their flocks.. 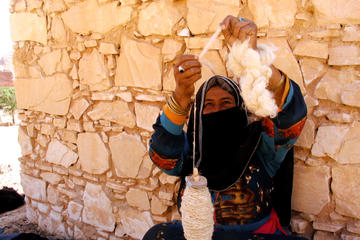