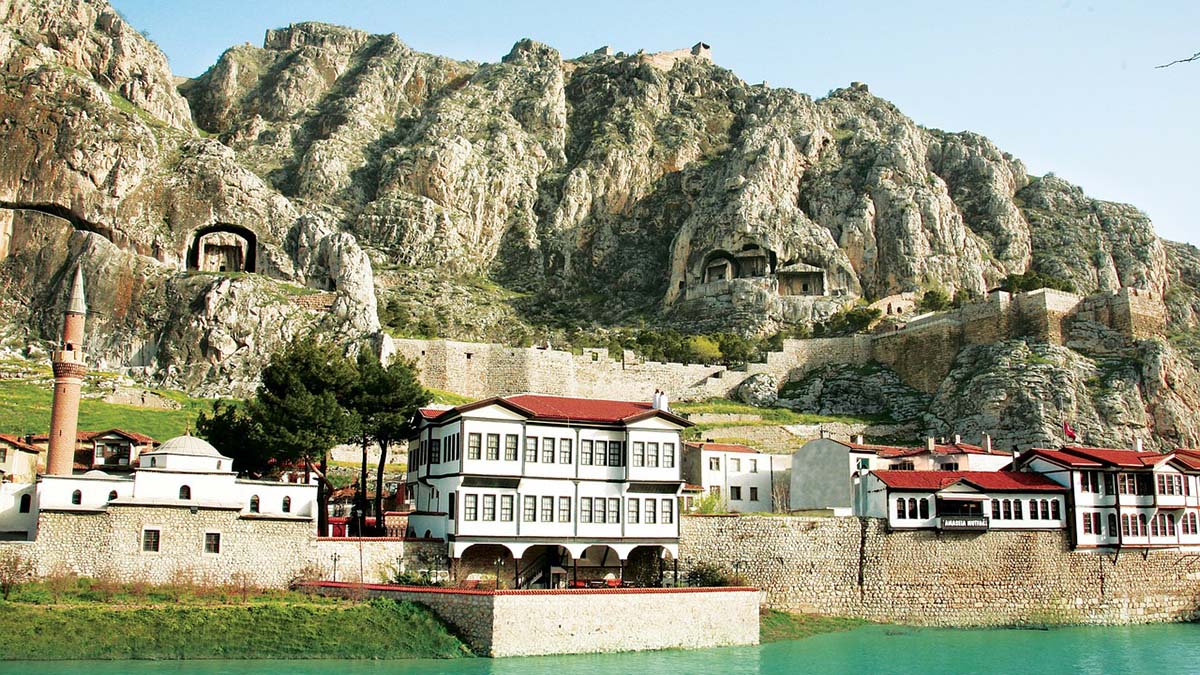 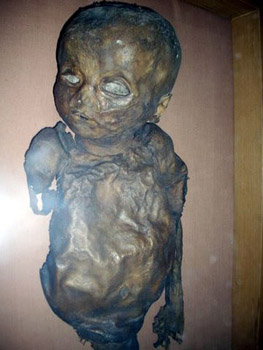 I saw the picture first and I couldn’t tear my eyes away from the image of a baby boy mummy staring at me with wide open blue eyes. It was part of a brochure about the archaeology museum in the fabulous mountain town of Amasya, located about 100 miles south inland from the Turkish Black Sea coast.

I couldn’t wait to rush off and visit the museum and have a closer look at this witness from 1000 years ago who was still looking at the world in this way. I generally have mixed feelings about looking at mummies. Somehow it seems to me as if I am intruding and disturbing the peace of the dead. Mummies are after all neither statues nor paintings, they are well preserved dead bodies of people who once were very much alive and, more often than not, important people, rulers, kings, queens or priests. But, on the other hand, no man made image can convey a real impression of how people looked who have lived such a long time ago and, in the end, curiosity always overrules misgivings. 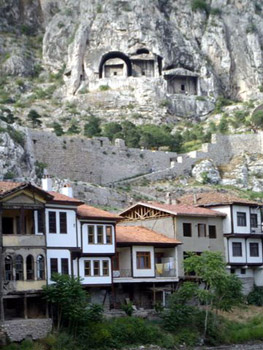 The first day of my stay in Amasya was dedicated to getting the feel for this amazing town nestled in the gorge of steep mountains and dominated by a towering castle on Harshena mountain, 700 m above sea level and first constructed in the Hellenistic period with alterations and additions ever since. Below it, the rock tombs of kings, illuminated at night, add to the magic of the entire place.

The next day however, I couldn’t resist any longer and went off across one of several bridges which lead over the Green River to the town center and Mustafa Kemal Pasa Caddesi, where the archaeology museum is located and, within the complex, the mummies awaited.

The museum consists of a two-story modern building, just your run of the mill block with nothing remarkable about the building itself. But wait until you get inside!

It’s one of these museums I like best, with just one ring-passage leading along the exhibits, displayed either openly like a big pile of amphorae or behind glass but allowing you to get close enough to see every detail. Few visitors were around and I could stroll at my leisure, admiring Roman coins and gold jewellery, the gold treasure of Saraycik and the world famous statue of Teshup which dates from the Hittite period of the 14th century BC and looks as polished and life- like as if it were created yesterday and many more artifacts from no less than 12 different civilizations which all have left their traces and silent witnesses in the tiny town of Amasya alone. 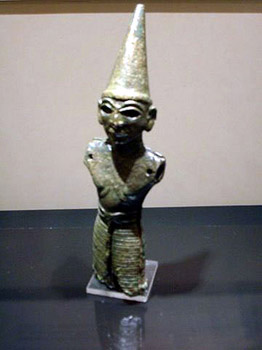 The first floor is dedicated to the Ottoman period and you can indulge in the luxury of embroidered garments worn by the sultans as well as ‘Tableaux’ which recreate life at the times.

But, where were the mummies? I asked and discovered, that they were treated with respect as the people responsible for the museum seemed to have had the same feelings about the nature of mummies I had.

I leave the museum and enter the adjacent garden which abounds with carved tomb stones and other relics and statues from the Greek and Roman periods. At the bottom is the tomb of Sultan Mesud I, Sultan of the Selcuks and within it the mummies are displayed. Was it their power to remind visitors to be respectful or was the sentiment my fancy? When I entered through the narrow and low doorway to the tomb I violently banged my head. Slightly dazed, I adjusted my eyes in the deep shadows of the tomb and approached the four mummies which belong to a high official and his family of the Ilhan period of the 14th century. 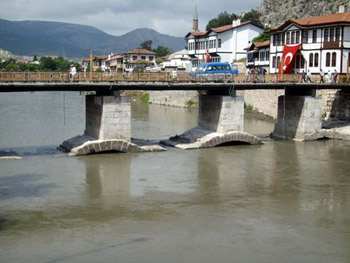 The nazir is surprisingly tall and then there is the baby, blue eyes wide open, little mouth and nose intact but the small body in part destroyed. I wondered what the little prince might have died of but at least it can be concluded from his peaceful expression that we wasn’t suffering any pain.

These mummies have been embalmed and preserved in a very different way from those of Egypt as the organs have not been removed but have been dried with the rest of the body.

May they rest in peace and continue to inform today’s visitor in their own silent way about their times and lives. 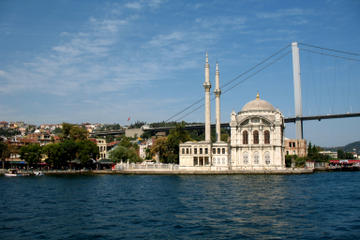 Bring a Turkish phrase book. English is not as widely spoken as in the more touristic areas of Turkey.
Bring good hiking shoes. Otherwise you won’t be able to climb up to the castle.
Try gözleme, a very thin, filling pancake which, in Amasya, is filled with poppy seeds. Amasya is famous for the best apples in Turkey too.
Book a hotel in one of the converted wooden houses along the river. For best views and good value, consult www.booking.com and www.tripadvisor.com for good deals.

Photo Credits:
First Amasya, Turkey photo by Kaan Özer from Pixabay
All other photographs are by Inka Piegsa-quischotte.