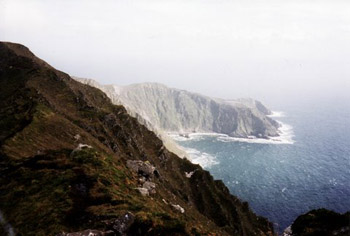 Hiking on the Edge of the World

As I stand high above the ocean I envision my fate if I were to stumble on a rock, slip on the narrow muddy path or get blown over the edge of the highest sea cliffs in Europe. The wind is fierce and unrelenting but after such a long chilly hike turning back is not an option. I take a deep breath and my first steps towards crossing One Man’s Pass.

The night before, I had arrived in the rugged and remote County Donegal in the north west corner of Ireland, after a long detoured route from Belfast. Typical, I had thought, my first day in Ireland would be a miserable, grey, soggy one. Then I caught my first glimpse of Glencolmcille’s serene beauty from the foggy bus window. The village was nestled in a valley with rolling green hills sprinkled by humble white stone houses. The picturesque quaintness of this seaside hamlet had an immediate calming effect on me, a stark contrast to the dreary and depressing industrial town I had just left. The rain here brought out the vibrancy of colours of the countryside.

I got off the bus on the far end of the single paved street village of Cashel, one of the three Irish speaking villages that make up the parish of Glencolmcille (glen-kaul-um-KEEL). Named after one of Ireland’s three patron saints who once resided here, Glencolmcille translates from Gaelic to the Valley of Saint Columba. The town is too small to even require a traffic light and it’s only amenities are small grocery store, a post office, a stippled church on the hill and three pubs to serve the population of roughly 725.

I followed the main street until it branched to the left, eventually leading me to the Dooey Hostel. When I arrived I was warmly received by Leo O’Donell and his wife, affectionately known as ‘Crazy Mary’. The elderly couple were quick to usher me inside their home which is literally built into the rugged hillside overlooking the bay. Upon entering the cottage I noticed the indoor garden along the foyer’s stone wall, ripe with vegetation which gave the sense that I just entered a twentieth century version of Bagg End of Tolkien lore. After getting out of my wet clothes I shared tea and biscuits with the other travellers as Mary and Leo suggested visiting the Folk Museum, thatched roof cottages complete with period interiors, and some of the many craved standing stones in the area. 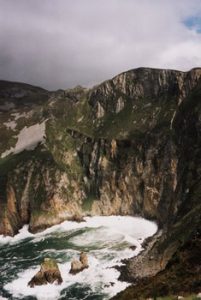 I noticed the old photographs on the wall “Are these the cliffs I’ve heard about?” I asked. “They look incredible.”

“Aye, that’s the Slieve League. They’re not far from here, ye can see all the way down to Croagh Patrick on a clear day. There’s a good hike if yer for lookin’ one?” Leo responded.

I was definitely looking for a hike. I had read about the Slieve League Peninsula and it was these legendary cliffs that had initially drawn me to County Donegal. Leo and Mary were happy to tell me all I needed to know in order to do the hike, and checked the weather conditions for me. I decided to go first thing the next morning.

The night was still young and I was offered my first introduction to genuine Irish culture in the form of local community theatre at the church. It seemed as though the entire town had turned out for the traditional folk play. The modest church with children’s paintings and artwork plastered on the walls, was brimming to capacity. The hall was alive with the clamour of neighbours greeting each other and exchanging stories. I strained to eavesdrop on their conversation but found it nearly impossible to understand their thick accents, English intermingled with Gaelic. I was giddy with the privilege of attending an authentic community event. This was rural Ireland at it’s best. Before the play began everyone rose for the Soldier’s Song or Amhrán na bhFiann, the Irish national anthem, sung in unison by the crowd in Gaelic. The play was a tragic one with comedic elements as is any good Irish tale, accompanied by the occasional song and instruments. After the show we joined the town at one of the local pubs for a couple of hearty pints of Guiness, some live Celtic “trad” and wished each other Sláinte, good health. 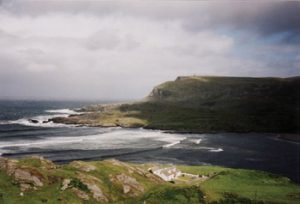 The next morning, I awoke to the sound of the waves softly rolling onto the sandy white beach of Glen Bay. I looked out the steamy window to see an unimpeded view of the bay. I brimmed with anticipation of the day’s hike. The morning was bright, warmed by the sun burning the dew off the luscious green countryside.

After a quick breakfast I caught a ride to the Slieve League Peninsula, passing peat bogs and farmland. At the coast, the elevation rises and the seaside falls away from the road snaking along the cliff edge. I held my breath as we rounded each corner, dangerously close to the ledge and climbing higher. The road itself was like nothing I had ever seen with hairpin turns and treacherous drops to the sea.

I was let off at the small parking lot next to the cliffs and where the trail begins. This point is called Awark-Mor which translates to “The Fine View” and a fine view it is, perhaps the best vantage point of the cliffs themselves from land. The trail head is located at the far left corner of an ever rising semi-circle of bluffs, sometimes known as the lair of whirlwinds. The craggy landscape is painted with mixture of warm earthy tones: white quartz with a reddish hue, draped in moist green moss. 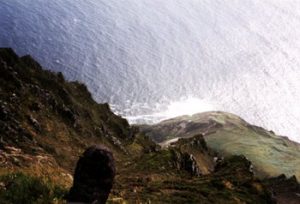 I peer over the ledge, an incomprehensible dizzying height of nearly 2000 feet. The violence of the waves that beat against the stone walls is lost to the beauty of it all. Not until I catch sight of the tiny white seagulls in the distance below can I begin to understand the magnitude or size of the rock face. The gulls dance, swoop and rise again upon the gusts, playing a seemingly dangerous game of life and death against the wind and rock.

I start up the trail that runs parallel to the cliff edge and climb upwards until I reach a plateau, stopping to catch my breath and take it all in. I close my eyes and listen to the roar of the wind whistling in my ears. The sound is deafening, but a feeling of serenity floods over me. I have never experienced the power of nature so intensely. A massive dark cloud rolls off the Atlantic, menacing and brilliant. I can taste it’s moist breath at my lips as it envelopes me and I reach out, feeling as though I can almost grasp hold of it’s translucent entity. The wind’s strength is so strong against my body I think how in a split second and change of temperament, it could go from literally holding me up to throwing me down.

I continue on my way up until I finally reach the final hurdle before the summit, One Man’s Pass. I had read about this section of the hike and had been ensured it was safe, but I wasn’t sure if I had the nerve to make the crossing alone. This thirty meter length of trail sits atop a narrow ridge, roughly two feet wide. The steep angled slopes fall away on either side of the path, with a thousand foot tumble to a certain rocky deathbed on the right and to the left, two thousand feet to the crashing ocean below. I wonder if it is a wise decision to go on. What if I fell? No one would ever know. It had been some time since I last saw any other hikers. I debate for a short time whether I should turn back but I know that it’s not really an option. I didn’t come this far to turn back now. The wind is still fierce but I’ve already stalled long enough. It’s now or never. I take a deep breath and take my first cautious steps towards crossing the daunting pass.

The path narrows and is soggy with mud. I raise my arms in front of me for balance and hunch over, lowering my centre of gravity. I choose to break the path up into shorter legs where I can stop at the slightly wider points or brace myself against a boulder for a moment. I focus on the path and each step that I take. A sudden gust of wind causes me to quickly brace myself and I kneel until it passes. I try to ignore the fact that I am walking such a slender precipice and imagine that I am actually on solid ground. My confidence grows. Half way through I stop to observe my surroundings. I feel like I’m am at the edge of the world and remember this coast was once considered just that. I walk the remainder of the pass with a renewed sense of confidence and vitality and reach the other side exhilarated by the challenge. Looking back upon the perilous route and beyond, I know that the photos I had taken will never do justice to this dramatic, mystical place. I am filled with a sense of pride and accomplishment, a renewed sense of life.

As I continued back down from the cliffs, I stop to enjoy the scenery of the rugged misty coastline. I stand against the wind, then take off running down the hillside startling the flocks of roaming sheep along the way. I follow the coastline to Malinbeg and then the road back to Cashel, another hour and a half walk. The road signs are all in Gaelic but I have no trouble finding my way because as they say, “All roads lead to Glencomlcille.”

Safely back at the hostel, that night I drifted into a deep, restful sleep content with the knowledge I had made the right decision to come to this remote, unspoiled part of Ireland and that I’d had the strength to face the mountain pass alone. 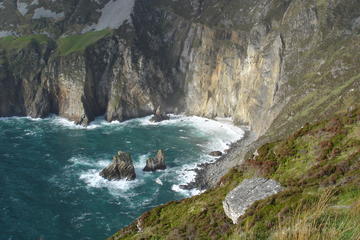 Walking Donegal: Hillwalking on the Glencolmcille Peninsula in Southwest Donegal

About the author:
Paris Patheiger graduated from Simon Fraser University with a degree in Criminology and the intention to pursue a career in policing. However, everything changed when she decided to let her creative side loose. She has given up her past pursuits and now plans on returning to school to further her study in writing and photography.

Photo credits:
All photos are by Paris Patheiger.