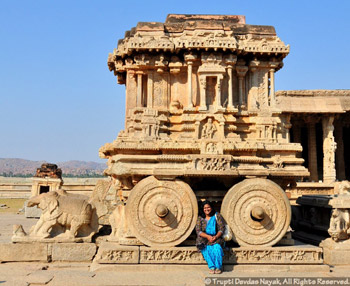 A mere six hour drive from the bustling technology hub of Bangalore, the city of Hampi lies along the Tungabhadra river, amongst the ruins of Vijayanagara, the last grand capital of King Krishnadeva Raya’s empire. Hampi derives it’s name from Pampa, which is an ancient name for the Tungabhadra river. The monuments of Vijayanagara city were built between AD 1336-1570. A large number of royal structures covering an area of nearly 26 sq km were built during Krishnadeva Raya’s reign (AD 1509-30). He is considered the greatest ruler of this era, which saw widespread adoption of Hindu religion, art and architecture. It’s no surprise that Hampi has always been popular with travelers seeking the bygone era of royal kingdoms, kings, queens and the artisan people. 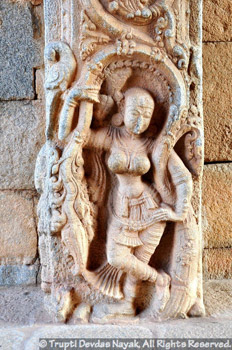 Given its historical significance, Hampi has been designated a World Heritage Site by UNESCO. This means the tourism infrastructure and maintenance is much better now than what it used to be. For many years, as the bustling cities around Hampi grew, the stone mandapas (stone pillared pavilions) on the mountains and carved dancing girls on the stone walls were silent witnesses to all that modern growth brings. Even now when you drive to the main site of Hampi, you pass many historic sites, with ruins of temples and mandapas, carved splendidly, surrounded by the bustling sprawl of city life, cars, modern houses and people. With recent improvements however, the main sites have been well preserved with security and infrastructure enabling travelers to experience this historic city to the fullest.

Everywhere in Hampi you will not escape the sense of richness and grandeur that must have prevailed in the kingdom of Vijayanagara at it’s zenith. Hundreds of artisans and sculptors toiled over years to produce some of the most beautiful, intricate carvings and architected fabulous temples, which to this day survives mainly because they were all painstakingly carved out of solid rock. Time and tide have done little to alter the artistic sensibilities of Hampi. 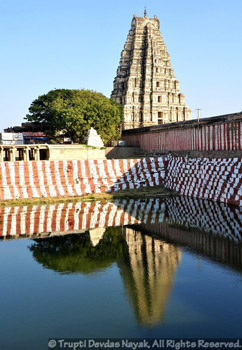 Wandering inside the sprawling metropolis is like traveling back in time. You can almost hear the trumpeting of horns as they welcome the royal family, with gloriously decorated elephants and horses, and the cheer and applause of the people as their beloved king and queen go by. King Krishnadeva Raya was a lover of good things in life, including good art. He ensured that many of the artisans and architects in his kingdom were kept busy and happy creating the most beautiful city in the world, coming to life out of solid boulders. A city which time and tide would never be able to transform into dust, a city which would remain standing forever. And so it does, to this day.

The Virupaksha temple is one of the longest running active temples in South India, and has been so since before the founding of the Vijayanagara empire. The aroma of incense, jasmine flowers and camphor fill your nostrils as you step into a cool darkened chamber and listen to the priest chanting his hypnotic mantras to appease the gods. Virupaksha temple is in the middle of the small bustling bazaar (market) area that has plenty of restaurants and shops which have sprung up to provide everything you would need when visiting. 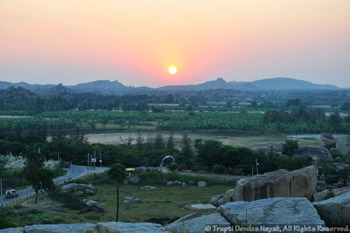 Hemakuta Hill is behind the Virupaksha temple and as we climbed up the mountain, several stone mandapas cast their long shadows on the granite as the sun began to set. Smaller temples and gopuras (stepped roof of a temple) rose in the distance. English-speaking tour guides are available for a fee and you can get a comprehensive history of the place on a full-day tour. Hemakuta Hill is capped by a “Sunset vista point” which is highly recommended for viewing glorious sunsets over the city. From the top, one also has a vantage viewpoint over the vast fields of banana and sugarcane in the distance. It is a very peaceful and serene scene. A hush falls over everybody as the mellow sun gets warmer, brighter and more beautiful. The glowing orb dips beneath the horizon to the tune of a thousand chirping birds on their way home.

As we explored more of Hampi, we were intrigued as to how these huge boulders were transformed into beautiful structures, with nothing other than bare hands and primitive tools. There were no power-drills and cranes at that time to do the heavy-lifting. These people must have had a lot of endurance, conviction and patience to work on these monuments for years at a time. As we later learnt, their methods were very innovative! The way the artisans of the Vijayanagara empire used to get the huge boulders into manageable pieces for sculpture and carving is to drill small holes in a row on a section of the rock. The holes were filled with wooden pegs, and water was poured over the pegs into the holes continuously. The wooden pegs would eventually expand and the boulder would split neatly along this edge into smaller pieces with flat faces! 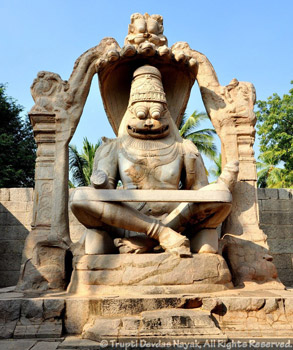 Hemakuta Hill and Matanga Hill are popular for day hikes. The sunrise atop Matanga is legendary, but we did not get a chance to see this for ourselves. All the main sites in Hampi are close by, although it would take longer to walk across to each, it’s easier to hop on to an auto-rickshaw to save time. We met a French traveler who was visiting Hampi for the second time, the first time being 10 years ago when he was just a young man eager to travel and see the world. Now he was much older and had a family. He was excitedly exploring the city on a bicycle to see what had changed and to relive the adventures of his youth.

One of the most impressive sights in Hampi is a 10+ foot statue of Narasimha (visualized as half-man, half-lion), carved out of solid stone. This was a massive sculpture and the lifelike details were mind-blowing. The eyes, the expression, the deity’s seated pose, everything was carved out of one rock. This deity had Goddess Lakshmi seated on his left leg, but her statue had been destroyed, likely hacked away by Mughal invaders, who also destroyed the faces of many gods and goddesses carved into the walls of temples to prevent people from idol worshipping. Signs of this type of destruction is all around, beautiful statues with faces missing, exquisitely peaceful smiles wiped away, now expressionless and mute as wars with the invaders raged on, empires rose and sank around them. But not all were subjected to such a fate. There are still many statues, thankfully intact, which a thousand hands since have touched, not to destroy … but only to caress and feel the cool granite moulded into fine details, to marvel at the lovingly created intricacies of each carving. 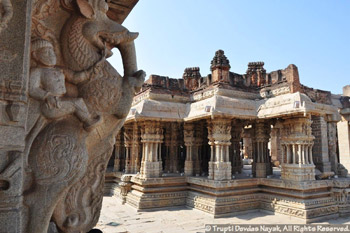 We left the best for the last – the Vittala Temple which is said to have the best carvings and sculptures in all of Hampi. We hiked up to the temple, stopping by at several pushkarni reflections (structures created in the ground to hold water, possibly for royal baths and other purification purposes), and a temple with horses carved out of the pillars (Kudremukh – horse’s face). At the Vittala temple, two things took our breath away. The ornate musical pillars and the royal stone chariot.

The royal stone chariot is a marvelous sculpture and the mascot of Hampi. This famed structure is carved out of one big boulder for the main chamber, and several others to make the wheels and axles. It stands in the middle of the Vittala temple courtyard. The level of detail and carving on the stone chariot is breathtaking. The chariot even moves! In ancient times, it was used to host the deity in the main chamber, along with the priest who would be chanting hymns. Temple elephants would pull the chariot forward and circle the temple as devotees followed.

We spent an entire day exploring many nearby temples, spellbound at all the beautiful carvings and sculptures made out of solid stone, imagining what it must have been like at this bustling city at the height of it’s richness and grandeur, with thousands of artisans, artists and sculptors carving away at these huge boulders to create what we are lucky to be able to still see and touch today. Hampi was a truly fascinating and memorable experience. We will be back again, and this time for longer. Maybe we will even get one of those bicycles like the French traveler and spend a couple weeks in this magnificent place, soaking up a bit of history! 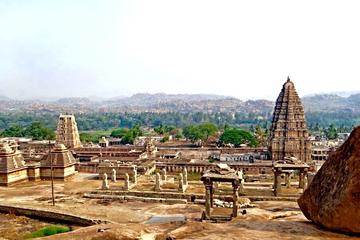 Nearest airport: Bangalore (BLR) airport. Hampi is 350 km (approx 6-8 hour drive) from Bangalore. You can take the Hampi Express train that goes from Bangalore City Junction to Hospet Junction. It will take around 9-10 hours. From Hospet, take a bus or a auto-rickshaw to Hampi.

Where to stay:
There are a number of places one can stay overnight when in Hampi, including the nearby town of Hospet. However, if you’re planning on doing sunrise/sunset hikes and want to stay closer to the magnificent ruins and the bazaar area, there’s no better choice than the plethora of family-owned guest-houses in Hampi bazaar itself. With terrace views of the Virupaksha temple and Hemakuta hill beckoning guests, many friendly families make a brisk business as they rent out rooms in their mansions, meals included, for an affordable price. Call ahead to make reservations as these places fill up during the peak summer months of travel. We stayed at Padma guest-house in the Hampi Bazaar area, with views of Virupaksha temple. This is the most convenient area to stay at, since the Hampi bazaar is always bustling with activity and is a fun place to explore in the evenings. Many of the sights (Virupaksha, Hemakuta, Matanga Hill) are all within walking / bicycling distance. Alternative options include staying at the city of Kamalapura (a few kms away) or in Hospet (12 kms away) or across the river at Virupapur gaddi, which means you will have to cross the rumbling Tungabhadra river in a primitive round cane boat to get across. An enticing option for fearless adventurers. Best Guesthouses and Hotels in Hampi

Where to eat:
The Hampi Bazaar area has streets and back alleys lined with dozens of restaurants and plenty of south-indian delicacies to choose from to fill your tummy after a day of clambering over the ruins. One delightful place in particular is the Mango Tree restaurant, which has a set meal (thali) that comes with generously portioned side-dishes providing a complete feast – vegetables, lentils, tortillas, rice, curries, yogurt, dessert, juice. 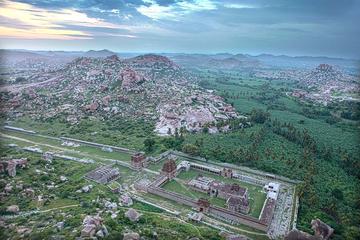 All photographs are by Trupti Devdas Nayak:
Sculpture of a dancing lady
Reflections of Virupaksha Temple in a pushkarni
Sunset from Hemakuta Hill
Narasimha Statue
Musical Pillars at Vittala Temple
Royal Stone Chariot at Vittala Temple

About the author:
Trupti Devdas Nayak is a freelance writer and photographer who loves (and lives!) to travel. When not writing or traveling, she is busy planning her next adventure. Amongst other things, Trupti has trekked the Inca trail to Machu Picchu, snorkeled with sharks in Oahu, witnessed horses dancing flamenco in Andalusia and she has hiked in over 30 national parks around the world and counting. She writes about her travel experiences at Exploring The Blue Marble (exploringthebluemarble.wordpress.com).