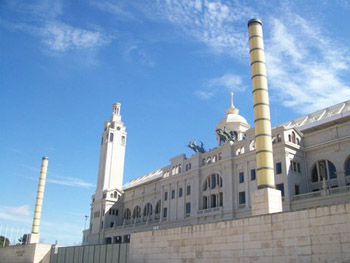 My plane was on time, but I was twenty-five years late.

In September, 1987 I had spent the afternoon on the E-90 north of Zaragoza hitching to Barcelona. When I got a lift in the evening with a couple who didn’t speak English I’m pretty sure I told them I was going to Barcelona. They couldn’t have understood me, because I saw the lights of Barcelona in the distance to my right; fade in and out of view. It was deep night by then, and I didn’t raise much protest; if any. They took me to Figueres, Salvador Dali’s hometown, and from there I continued north.

Now I’d finally made it to Barcelona; to run a marathon in a few days time. It was experiences like Zaragoza, where I had walked for several miles in intense Los Monegros desert heat, that made me think I could endure running long distances. In my experience, independent travel can be just as grueling as organised events, but achievements usually go unrecognised; taking place with only road and nature as witness; forgotten like desert dust blown off a worn rucksack. 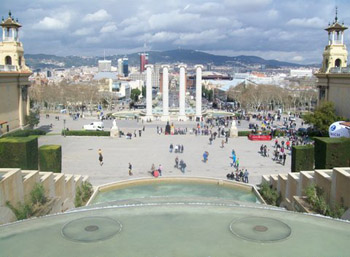 I settled in on the first two days, and on Saturday visited Montjuic Park for the marathon expo; to collect my race number and timing chip. The Museum of Arts towers over the front of the park; above cascading fountains framed by rows of steps. Musicians and giant dolls entertained in the square at the bottom of the cascading fountain. 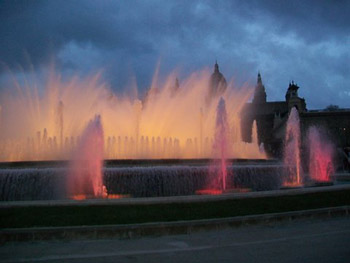 I returned in the night to watch the Magic Fountain show. Every fifteen minutes between 7pm and 9pm the circular fountain at the foot of the hill seems to be awakened by music, spraying water high in the air while changing colours.

The next morning I joined about 20,000 runners below the fountain, with the elite runners setting off at 08.30. About twenty-five minutes later I passed the start line, ran around the twin Venetian towers and half way around the Praca d’ Espanya roundabout. The area had a facelift for the 1929 world exhibition, and provides a nice introduction to Barcelona for those entering the city from the main El Prat airport, about fifteen miles to the south. 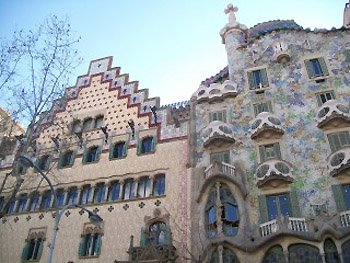 After about four miles the circuit took us past Camp Nou; the 98,000-capacity home of FC Barcelona is the largest stadium in Europe. That night I joined 68,000 people at the stadium to watch Barcelona beat Rayo Vallecano 3-1. Climbing to a seat about five rows from the top of the 150-feet-high stadium was hard work, but worth it, with the sensation of emerging into the steep-sided seating above the bright green pitch reminding me of the Lost Horizon story of a Shangri-La hidden in the Himalayan mountains.

In about ten miles the marathon route returned us to the city centre, running up Gracia past the Modernisme architecture that distinguishes Barcelona. La Pedrera statues pierce the sky from Casa Mila’s rooftop, while buildings such as Casa Amatlla and Casa Batllo seem to shout loud colours from intricately glossed lips. 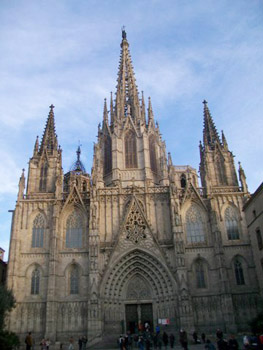 Antoni Gaudi was Modernisme’s most famous artist, and a couple of miles later we passed the movement’s crowning glory. La Sagrada Familia is still under construction a century later. The 13,000-capacity cathedral’s size distinguished it from other cathedrals while passing, and on closer inspection so does its blending of nature into the design. Gaudi liked curves rather than straight lines, claiming there were none of the latter in nature; and some spire-tops are decorated with balls of fruit-colours.

After looping north we ran parallel with the Mediterranean Sea, and through Barcelona’s Modernisme-style Arc de Triomf; built for Spain’s first international exposition in 1888; the event an important showcase for the city’s art movement at its peak. The last kilometre returned us to Montjuic Park, where we’d begun.

A good crowd braved rain-showers to cheer runners home, and along with all the drinks-volunteers, musicians and spectators along the way they made the marathon experience into more than just a time and achievement. 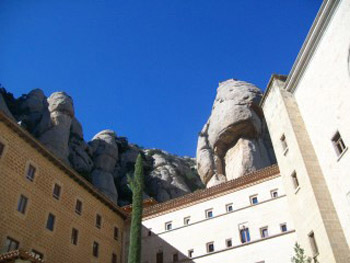 The sky cleared the next day, and temperatures rose into the 60s Fahrenheit. I took the train out to Monistrol de Montserrat, and hiked to the Santa Maria de Montserrat monastery. To the north-west, snow-capped Pyrenees signified the border with France, while the Mediterranean Sea was visible to the east.

The Benedictine abbey seems more amazing than La Sagrada Familia in many ways; within nature rather than including nature. The abbey is nestled near the top of the highest Montserrat peaks; like a ship in bottle; hardly noticeable from the train below. I wondered how it was constructed; before the bus, train and cable car that now service Catalonia’s most important religious retreat provided easy access. 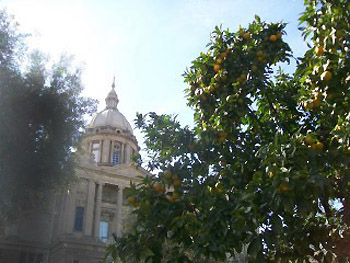 The next day I returned to Montjuic Park, going past the Arts Museum to the Olympic Stadium, which brought back memories of the 1992 Games. I walked past torch-pillars and the Telefonica tower to the tree-filled green zone leading up to Barcelona’s castle. Cannons point up and down the coast and there are great views of the city all the way to Tibidabo Mountain, overlooking Barcelona on the western horizon. The castle has a chequered past, being used to hold and execute prisoners in the civil war and other twentieth-century conflicts.

There was time to visit the La Rambla shops, cafes and street entertainers; the Waterfront; and Gothic Quarter’s narrow alleys in the afternoon. The latter also has Roman ruins and La Catedral. On my last full day I visited Gaudi’s Park Guell in the north of the city, before returning to La Sagrada Familia and the other Modernisme masterpieces in L’Eixample; seeing that some have now been converted into designer shops.

I could only walk past and admire; but it inspired a thought. I’d also converted something old into something new in Barcelona; a road-tale memory into a road-running achievement. And as Barcelona continues to craft La Sagrada Familia, I’d also fitted in one more piece of my quarter-century-old original journey plan.

♦ Barcelona is an international hub served by an airport; railway and bus stations; and has a modern metro system. There are tourist buses providing a hop on service to main tourist sites upon purchase of a day’s travel ticket.
♦ Marc stayed in Hostel One Sants, which is nice and friendly, and near the railway station.
♦ There are tourist information offices in many city centre locations. People speak Catalan as well as Spanish, and English is widely spoken. The Euro is the currency.

About the author:
Marc Latham travelled to all the populated continents during his twenties, and studied during his thirties, including a BA in History. He now lives in Leeds, and is trying to become a full-time writer from the www.greenygrey.co.uk website. Marc has several published and self-published books available on Amazon.