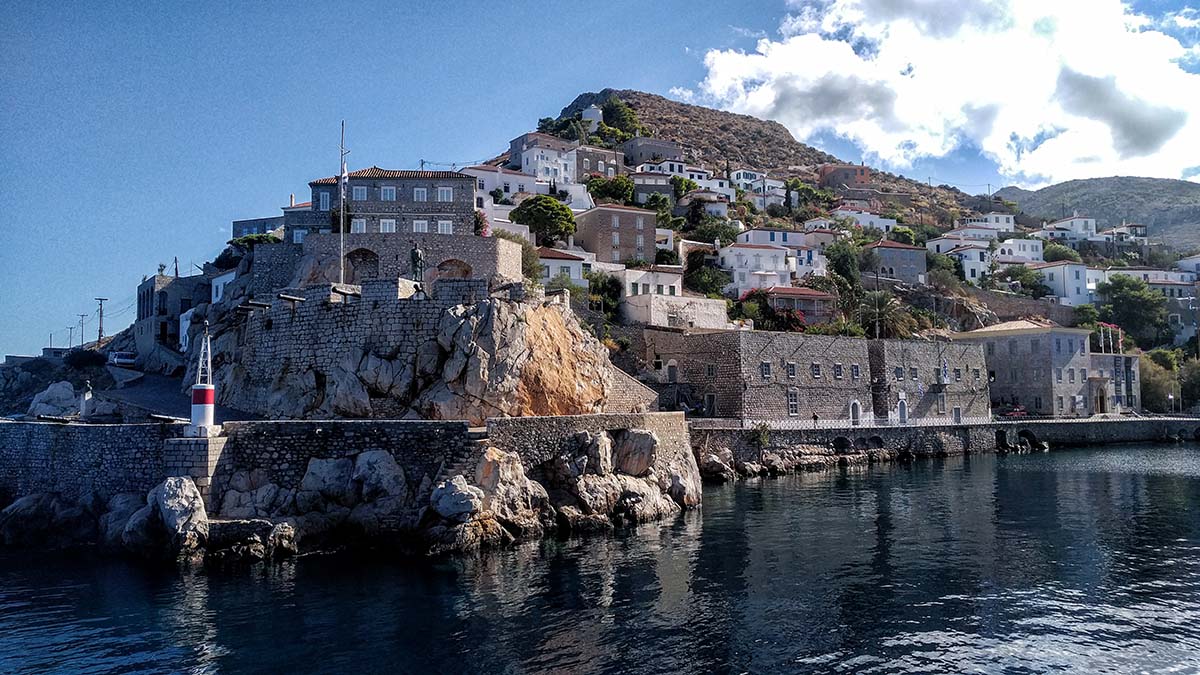 It was the quintessential night on a Greek island: a vine-laden terrace bestrewn with blue and white checkered tablecloths, platters of calamari and retsina issuing from the kitchen, waiters nimbly negotiating the narrow pathways between tables and the air seared with the sensuality of a warm night and the sounds of a single bouzouki. On this night, a lyra, a female vocalist and the dulcimer tones of a Persian sandhu join the bouzouki. The music is full-throated and distinctly Eastern in flavour. 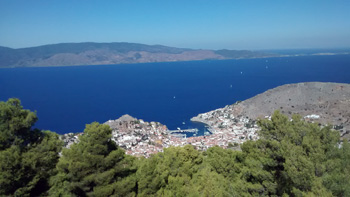 We are celebrating the conclusion of a Rebetiko Music Festival on the island and are among the grateful throngs standing retsina-less at the side. Grateful that the sell-out concert is able to accommodate the late-comers, and happy that we are part of the audience who are standing ‘in ovation’ for the musicians who had given us such a wonderful weekend of this once outlawed music.

Rebetiko music had not been on our radar when we stopped in Hydra during our month-long meander through the Greek Islands. Rather we had aimed for Hydra because we were on a quest for 1) great walks, and 2) the Canadian songwriter laureate, Leonard Cohen (or at least, a glimpse into the reason he had chosen Hydra as a writer’s haven). 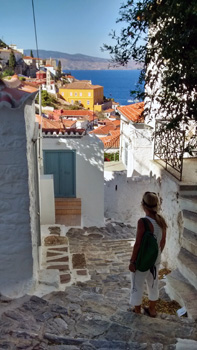 We arrived via ferry and were greeted by that archetypal Greek island scene: a pier thrumming with people and activity, faces alight with anticipation, voices calling out greetings, cafes jumping to attention, and ferry crews bent on maintaining control in the confusion. And in Hydra, donkeys. Perfectly poised teams of donkeys waiting for the stevedores’ commands. Motorized transport is prohibited on the island, except for emergency and sanitation vehicles, so donkeys are ubiquitous. The new refrigerator and month’s supply of water bound for the hill-top monastery? They get loaded on a donkey. We credit the donkeys as well for the blissful soundscape that greeted us on Hydra, where the church bells, the roosters, the laughter, the sounds of the ricocheting soccer ball, the children’s’ calls and the donkey’s hooves on the cobblestones seem to blend seamlessly with the silence. What a pleasure it was to walk through the narrow winding streets and to follow well-marked signs which led to the less explored regions of the island. Twenty minutes into the hills, we were surrounded by the pine forests, the island’s wild horses, and as always in Greece, the remote hill-top monasteries and the vast blue of the Mediterranean. 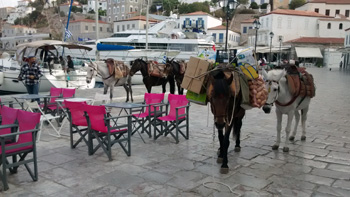 A particular joy on Hydra was ferreting out the fabled Cohen home on the island – the one he had lived in during the 60s with his Norwegian muse, Marianne Jensen. The years in Hydra had been seminal for Cohen, allowing him to immerse himself in his writing and imagine a future as a poet and songwriter. His house lies snug smongst others on a hill overlooking the harbour and is predictably modest unmarked and shuttered. We trace his probable route down to a favourite swimming platform at the entrance to the harbour. I plunge in, revelling in the clarity of the Mediterranean so close to town, imagining the heat of those summer days that would have coaxed Cohen down to the sea each afternoon. What manna for my imagination and memories still flush with the sound and vision of 60s song writing to relive this magical time for Cohen so many years later! I was not the only one seduced by this ‘oracle of my youth’, but the Cohen legend is thankfully carefully guarded on Hydra – no line-ups, and apart from the occasional furtive photographer outside his house, you can pay your respects in peace.

The nostalgia for the bohemian 60s didn’t end with Cohen. Posters around town advertising the upcoming Rebetiko Muisc Festival – a music that had also flourished during the 60s in Greece – suggested that we linger a little while longer on Hydra. It proved to be a wise and exhilarating decision! 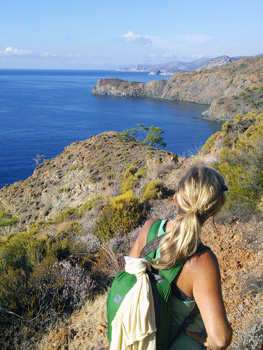 Rebetiko music, with roots in Anatolia, was fashioned in the ghettos of Piraeus and Athens after the population exchange between Turkey and Greece in the 1920s. It is the folk music of the displaced, the political outsider, the social pariah, and wonderfully marries the modalities familiar to musicians all along the Silk Road. A synthesis of Turkish, Greek, Arab, Persian and Jewish musical traditions, rebitiko gave expression to the experience of the exiled. Themes of love, loss, work, war, poverty, death, violence are embedded in the soul and sound of rebetiko music. Rhythms and melodies are drawn from the cross-cultural traditions and instruments in a rebetiko ensemble are likewise diverse: lyra, santur, guitar, clarinet, oud, tsimbalo, violin, double bass, piano and accordion. The instrument that is emblematic of rebetiko – the bouzouki – became more prominent as the musical form develops in Greece. Commonly associated with the ouzeri and hashish dens, and considered by both Turkish and Greek governments to be either too degenerate or ‘Oriental’ in nature, rebetiko music was forced underground in the 1930s. ‘Cleaned-up’ versions of rebetiko music began to re-emerge in the 1960s and with the growing worldwide popularity of the bouzouki, the rebetiko revival had begun.

Today, rebetiko’s storied past and distinctive musical idiom attract both the scholarly and musical community, the intersection of which we were privileged to witness on that October weekend in Hydra. While some of the academic presentations were specially aimed at “the insider,” (algorhthms of Persian music, anyone?) others – like learning that a dominant scale used in rebetiko music is shared by Jewish Klezmer, Iranian, South Arabic and Flamenco music – help us understand rebetiko’s close relationship with the Middle East. The presentations are interspersed with performances – some held in the famed Melina Mercouri auditorium (named after the Greek actress and a former Minister of Culture) and others in appropriately ‘shady’ cafes. One concert features a Greek singer and a Scottish bouzouki player who balance their Greek rebetiko repertoire with explorations into Celtic music. Suspended in this glorious web of sounds, ideas and cultures, we didn’t seem to mind that we had lost the trail on Hydra, and walked past the monasteries and Marianne right into rebetiko! 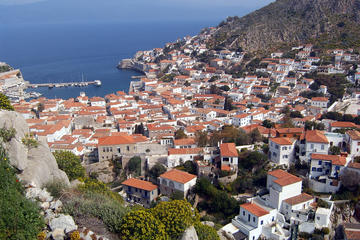 ♦ Ferries and hydrofoils between Hydra and Piraeus run 2-4 times daily. Book on-line or in Piraeus with Hellenic Seaways. Allow 2 hours for trip each way by hydrofoil.

♦ Accommodation is available for every budget in Hydra. Book early during high season as Hydra is popular with Athenians. Highly recommended is Hydra Icons (with themed rooms of world famous artists, including Leonard Cohen!), steps away from the harbour and cafe-bars. About $90.00/night.

About the author:
J. Kathleen is a lover of adventure, books, music, epic people and journeys and liberal amounts of Greek sunshine and yogurt. When not on a bike, bus or boat in and around the Mediterranean, she can be found waterside in Vancouver or Christina Lake, B.C. Her writings can be found on her blogsite: www.justgojo.com.

Photo credits:
First Hydra, Greece photo by Dominik Gawlik on Unsplash
All other photos are by J. Kathleen Thompson or Ken Flagel.