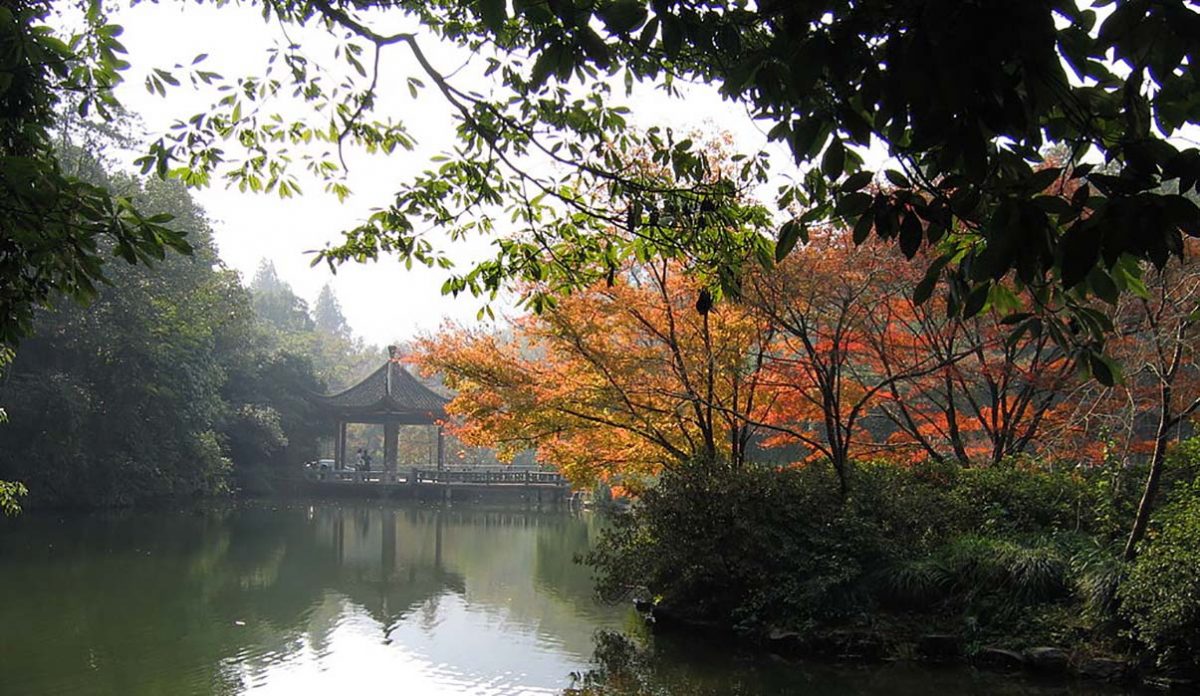 As rain splatters loudly on the foggy plexiglass windows, our tour boat putters loudly across the water. I stretch up from my low seat at the back of the boat to peer at the watery world outside. At the same time I strain to listen to our tour guide at the far end of the boat as she tries to make herself heard above the thrumming of the engine.

We are in the Yangtze River Delta, on Hangzou’s West Lake. Although it is difficult to appreciate on such a grey, misty day, this UNESCO World Heritage site has been famous for its picturesque beauty throughout Chinese history. Surprisingly, it maintained that reputation in spite of a natural tendency to silt up and through alternating historical cycles of neglect and restoration. During the Tenth Century era of the Ten Warring Kingdoms, for example, weeds completely covered the lake and it almost reverted to marshland. However, after it was cleaned up and dredged it became a favorite imperial vacation spot and a tourist destination for foreign visitors, including Marco Polo, who travelled to China along the legendary Silk Road.

As I strained to hear, I heard our guide promise to tell the story of the Chinese Romeo and Juliet. Always keen to hear a good historical yarn, especially if it had an element of romance, I was hooked. Eager to learn more, I tried to focus even more closely on our guide’s voice.

She began with a romantic teaser which was a delightful illustration of the Chinese fascination with numbers. Pointing to three grey stone pagodas sticking out of the rain-spattered water, she told us that we were in one of the most romantic spots in China.

“You know,” she said, “that the moon represents romance. Well, this is the home of 33 Moons.”

She explained that each of the three pagodas was pierced with five round holes. On the night of the mid-autumn Moon Festival, candlelight shining from these fifteen moonlike holes created fifteen reflections, doubling the number of moons to thirty. The full moon in the sky and its reflection on the lake increased the number to 32.

“And the full moon in your heart,” she finished with a flourish, “makes 33 moons!”

With magical visions of floating moons in my head and newly aware of the moon in my heart, my imagination floated away from the chill, misty present to a Moon Festival celebration on a warm, clear September night. Then, suitably prepared by our guide’s introduction, I listened eagerly to the tale of Liang Shanbo and Zhu Yingtai, also known as the Butterfly Lovers.

It seems that there was once a rich merchant named Zhu who was blessed with eight fine sons. When his ninth child was born, he was delighted to have a beautiful daughter. This was Zhu Yingtai, who soon became his favorite child. He preferred her over all of her brothers, and indulged her every whim. 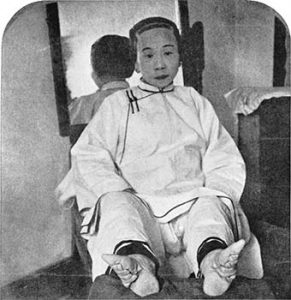 Before the modern era, young Chinese girls from wealthy families would have had their feet bound. When a girl was about four years old, a professional footbinder would break her tender foot bones, turn her four small toes under the soles of her feet, and bandage them tightly. As the child grew and developed, her instep would be virtually bent in two, and the growth of her deformed and tightly bandaged feet would remain stunted. As a fully grown woman, she would be forever destined to walk painfully on the tiny, four inch long “lotus feet” or “lily feet” which were considered the ultimate standard of feminine beauty.

Not wanting to see her suffer, however, Yingtai’s father did not force her to undergo this horrific procedure, and her feet were allowed to grow naturally.

Yingtai was also determined to get an education. However, families generally focused on educating their sons for future careers and education for girls was not a priority. But Yingtai continued to beg her father to allow her to get an education until he gave in to her pleas. Because her feet were unbound, she was able to attend school disguised as a boy. There she became close friends with Liang Shanbo, a scholarly student from a poor family who was determined to study hard and succeed in life. 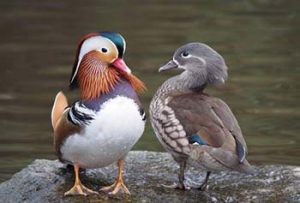 Yingtai fell in love with Shanbo and tried to share her feelings with him. At first, she tried subtle hints, but without success. Totally focussed on his studies and completely unaware that Yingtai was a girl, Shanbo did not pick up on any of her clues. When the two of them were walking by the lake, Yingtai pointed to a pair of mandarin ducks swimming nearby, pointing out that these lovely little ducks, who the Chinese believe mate for life, were symbols of a loving and faithful marriage. But Shanbo still did not understand what she was trying to tell him.

Finally, Yingtai told him directly how much she loved him and proved she was a girl by showing him her pierced ears, which were hidden under her hair. Shanbo fell deeply in love with Yingtai, but their love was doomed because Yingtai’s father had arranged for her to marry into a wealthy family. Inevitably, Yingtai had to return home to prepare for her marriage, and the lovers were forced to say farewell.

The sky darkens and the black clouds above us weep a waterfall of tears as our boat reaches the far shore. In front of us, a small stone bridge crosses a narrow stretch of water framed by weeping willows. This, our guide tells us, is China’s Bridge of Sighs. It is said that it took the lovers six hours to cross the bridge as they said their reluctant goodbyes, giving this bridge the nickname “longest short bridge” in all of China.

Shinbo died of a broken heart and was buried by the road between Yingtai’s village and that of her future husband. 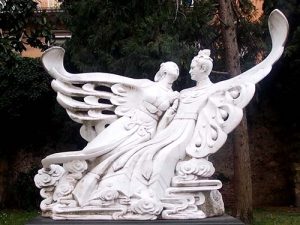 On the day of her wedding, Yingtai dressed in her bridal gown and climbed into the litter which was to carry her to her new home. A storm forced the wedding party to stop for shelter near the spot where Shinbo was buried. Yingtai climbed out of her litter and ran over to her true love’s grave. Magically, the tomb opened up and Yingtai leaped in and disappeared. Finally, the storm ceased, the sun came out and the wedding party went to investigate. They found no sign of Yingtai. Instead, they saw a pair of butterflies flying away together. It is said that these were the souls of Liang Shanbo and Zhu Yingtai, finally united in death.

It was still raining that evening when we returned to West Lake for Memories of Hangzou, a state-of-the-art extravaganza designed for the 2016 G20 summit by the team responsible for the opening ceremonies of the 2008 Summer Olympics.

I was absolutely awed by the show, which was spectacular even in the pouring rain. On the far shore of the lake a larger-than-life full moon rose over a brilliantly-lit pavilion. As its reflection shone back from the surface of the lake, I was reminded of our guide’s description of the 33 September moons. By the light of the giant moon, at least a hundred identically costumed dancers appeared, seeming to walk on water as they swayed and spun across a stage submerged a few centimetres below the surface of the lake. While a live string orchestra played, accompanied by a piano which had been rolled out over the water, a host of dancers performed against a backdrop of multicoloured laser beams which cast ever-changing patterns onto a background of dancing fountains.

The highlight of the evening was the dance of the Butterfly Lovers. I watched two dancers skim across the water dwarfed by the shining light display behind them. A brilliant kaleidoscopic rainbow morphed into a giant multi-colored fan. Then, just as in the story, the rain ceased as the fan morphed into a myriad of iridescent butterflies

This delightful performance was followed by the grand finale, a stirring rendition of Beethoven’s Ode to Joy. Nothing could have provided a more fitting tribute to the undying love of Zhu Yingtai and Liang Shinbo, or a better ending to our time in Hangzou.

Tap water is not safe. Always drink and clean your teeth with bottled water.

Toilets are “squat” style. If this is a problem, you will have to find a handicapped toilet. These might be indicated with the international handicapped symbol although one I used was labeled with a handwritten sign that said “for maimed persons only!” 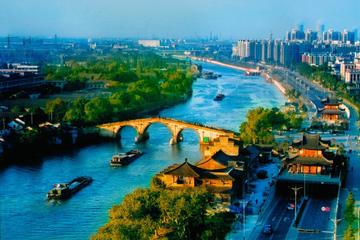 Hangzou is a popular tourist destination with direct flights from Shanghai and Beijing and a high speed train connection from Shanghai.

You will need a Chinese visa. Consult your travel agent or local Chinese embassy or consulate before your visit.

China is primarily a cash economy, so you should obtain a supply of Chinese Yuan (also known as RMB) before your trip. Tipping is neither customary nor expected. 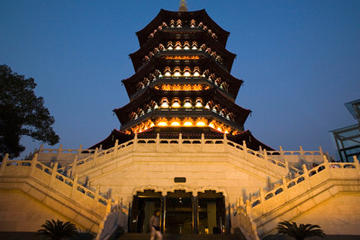 Lesley Hebert is Simon Fraser University graduate. Retired from teaching English as a second language in the classroom, she now teaches ESL via Skype, and writes on-line articles which reflect a lively, inquiring mind and a love of travel, history and culture. Read more of Lesley’s articles at www.infobarrel.com/Users/HLesley