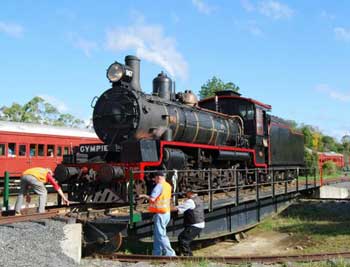 All over the world, railways are coming out of use. But, in many cases, although they’re uneconomical, some people are reluctant to let them go, and form Preservation Societies, to maintain the trains and run the line. The main purpose is to show people how things used to be. I’ve seen many a child watching them in fascination, for, on an old-fashioned steam locomotive, you can actually see the working parts, and work out how they run.

However, all this costs money, and so many of them are scenic lines, operated for tourists, whose fares provide the money they need.

This, though, isn’t always the case. During the recent unprecedented floods in Queensland, Australia, the preserved Mary Valley Heritage Railway, known affectionately as the ‘Rattler’ performed a valuable service, which wouldn’t have been possible if the line had been lost. 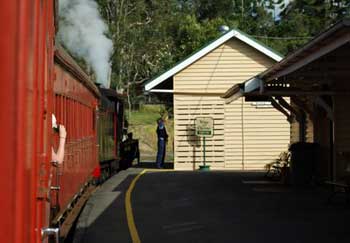 In 1867, gold was discovered on the banks of the Mary River, in Queensland, about 170 miles north of Brisbane, the capital. A mining settlement grew into the town that is now Gympie, and it was decided that the best way of bringing in essential supplies, and maintaining contact with the outside world would be a railway line to the nearby port of Maryborough. This railway was opened in 1881. Because of the growing importance of Gympie, it was decided to connect it to Brisbane by rail also, thus doing away with the need for a sea voyage to Maryborough.

The original plan was to run the line along the fertile Mary Valley, in which a number of towns and settlements had been established. But, the railway company opted for a cheaper alternative, which opened in 1889, and bypassed the valley completely. 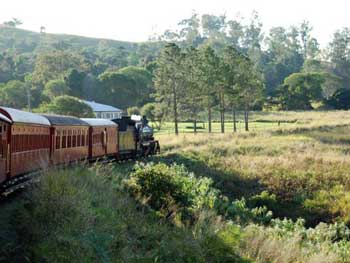 As well as carrying passengers, the railway also carried produce from the farms in the valley, mainly dairy produce, pineapples and timber. Most passengers rode on a diesel rail car affectionately called the ‘Red Rocket’. Such vehicles were often used where the number of passengers didn’t justify the use of a steam or diesel train. The ‘Red Rocket’ ran into Gympie daily, most of its passengers being children going to school in the town.

The railway runs from the historic Railway Station in Gympie, built in 1913 to replace an earlier structure. It hasn’t changed much over the years, but was closed by Queensland Railways in 1995. The main North Coast railway line, which it used to serve, had been upgraded and electrified in 1989 and a new station had been built at Gympie North. The Old Gympie station was relegated to a freight depot, and the MVHR took it over in 1997, where they established their headquarters. 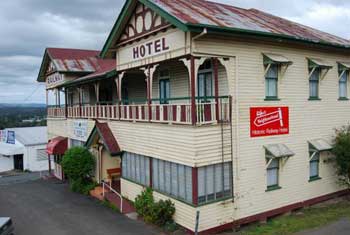 Near the Old Station, the Railway Hotel looks just the same as it did for most of the 20th Century, and the stations along the line have been preserved, too. We only actually saw one, at Dagum, where the train halted for a while, so volunteers could show us the produce … mainly wine and cheese, made right there in the Mary Valley.

That was because we didn’t go all the way; while some trains go on to Imbil, the afternoon ‘short run’ only goes a little way past Dagum, to terminate at Amamoor. Here the locomotive is turned around on a turntable, and ‘runs around’ the train to pull it on the homeward journey.

By Rail
Queensland Rail operate regular services from Brisbane, as well as from other towns in Queensland. You can find more information at  https://www.queenslandrail.com.au/

By Bus
Greyhound Australia Coaches operate services several times a day to Cairns, which call at Gympie. Details, timetables and bookings are at https://www.greyhound.com.au/

About the author:
Having written as a hobby for many years while serving in the Royal Air Force, Keith Kellett saw no reason to discontinue his hobby when he retired. With time on his hands, he produced more work, and found, to his surprise, it ‘grew and grew’ and was good enough to finance his other hobbies; traveling, photography and computers. He is trying hard to prevent it from becoming a full-time job! He has published in many UK and overseas print magazines, and on the Web. He is presently trying to get his head around blogging, podcasting and video. Contact him at keith-kellett@tinyworld.co.uk.