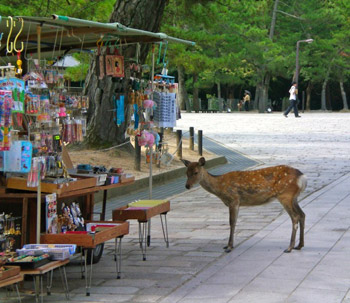 I don’t know how old the lady was. She may have been fifty, but more likely she approached a century. Standing, she barely reached my shoulder. Her stall was filled with food for tourists to buy and feed the deer. Remarkably tame, over one thousand deer (or shika) stroll freely through Nara Park.

Founded in 710, Nara was Japan’s first permanent capital. (Until then, each new emperor established a new capitol.) Known as Heijo-kyo (or Citadel of Peace), Nara rapidly became one of Asia’s most splendid cities, despite being the capitol for only 74 years. It also became a major centre for Buddhism, for the mountain range here divides Heaven and Earth, creating a home the gods. For many, this area of Japan is sacred.

As are the deer, for they are the messengers of the gods. 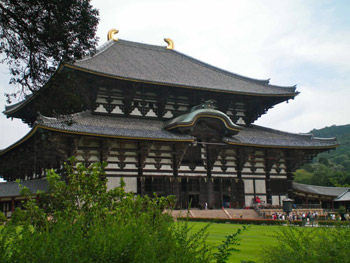 One of the delights of staying for a few nights in a place, rather than visiting for a day, is having the time for unexpected discoveries. We passed the night in a youth hostel, and breakfast came courtesy of the vending machine: a variety of different flavored minute noodles. Another machine offered a range of both hot and cold coffees, all served in a can, the temperature indicated by the color. The man on reception even made us some green tea in a gorgeous ceramic pot.

Our walk from the youth hostel led through a largely residential area. Old houses stood amongst immaculate gardens with perfectly manicured trees. Many had stone fences, and many had a statue of a beaver near the front door (for good fortune), often wearing a colorful apron or silly waistcoat. Being summer, gardens were awash with flowers.

We entered Nara Park through the little-used Tegamon Gate, which was literally hidden at the end of the street. It felt as if we had strolled into a local park; despite being the height of tourist season, the grounds seemed empty. Nara Park is some 1300 acres of parkland in the centre of the city; more than enough for hordes of tourists to lose themselves. Within its walls reside some of Nara’s most ancient and sacred buildings.

Within minutes, we’d spotted our first deer. Soon we saw them everywhere, some condescending to be patted, others scampering away should we venture too close. Meanwhile, paths and secluded walkways enticed us in all directions. There are more than enough temples to satisfy the most ardent visitors; tea houses to partake of refreshment, vending machines for cold drinks and ice-cream (flavors including green tea), and manicured lawns stretching down to lakes for simply relaxing. We even stumbled across some vegetable gardens and a few small rice paddies, all grown by the monks who live in the temple complexes. Walking down an alley of stone stairs, we came across a group of ladies painting. 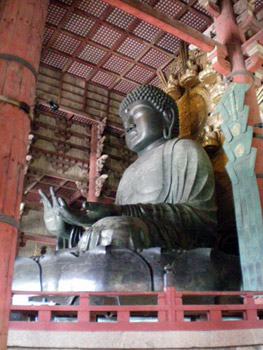 Everywhere we walked, the deer were relaxing in the shade, nibbling the grass, or simply wandering at leisure.

The Todai-ji temple complex comprises the Daibutsuden (or Buddha Hall), sub-temples, halls and pagodas. The great southern gate is 19m high, whereas the temple itself has a striking roofline of up-turned lintels with golden tips. Within the Daibutsuden is the Great Buddha; at 16m, it is reputedly the world’s largest bronze Buddha. Cast in 752 AD, its size is best appreciated when being cleaned, when it is not uncommon to see four or five monks standing in the Buddha’s outstretched hand.

A victim of earthquake, fires and wars, the Buddha’s head dates to 1692. In a wooden pillar behind the Buddha is a small hole; it is said anyone who can squeeze through it will reach Nirvana.

A grand flight of stairs leads from the Sarusawa Pond to the Kofuku-ji Temple and Treasure House. This temple complex was founded in 669, although many of the original 175 buildings no longer remain. The current temple, a five-story pagoda, has been destroyed by fire several times; this building dates to 1462. It is the second tallest pagoda in Japan. The Eastern Golden Hall (or Tokondo) was constructed in 726 by Emperor Shomu (who also constructed the Todai-ji Temple) to speed the recovery of the Emperess Gensho. Along with the Treasure House, it has several priceless images, including a 12th century wooden bodhisattva of wisdom. There are also Buddhist paintings, scrolls, calligraphy and sculptures, many dating from the Nara and Heian periods.

There are numerous temples within the park, but not to be missed is the Kasuga Grand Shrine. This is one of Japan’s most photographed Shinto shrines. Originally built in 710, it was demolished and an identical shrine rebuilt every 20 years, in accordance with Shinto strictures of purity and renewal. The current building is relatively modern, dating to 1863. 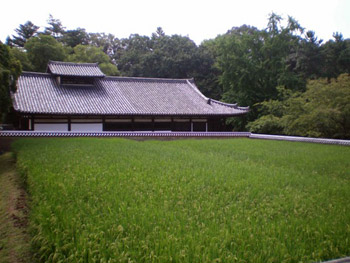 The walkways around the shrine are lined with some 3000 stone and bronze lanterns. These have been donated over the centuries as tokens of thankfulness and faith. During festivals in February and mid August they are lit: a spectacular time to visit. You can also buy a slip of paper (omikuji) with your fortune; if unfavorable, simply tie it to one of the trees to negate its effects. Behind the temple is the Rokuen, a botanical garden preserving Japanese plants, and famous for its wisteria, plus its Homotsuden, a hall displaying costumes, swords and ancient armor.

Visiting Nara Park is walking back into the Japan that once was. As we left the park, the deer were using the subway to cross under the main street. From the roof of a nearby building we looked back over the park itself, with its primeval forest in which the trees have not been felled for hundreds of years. I felt I was not only looking back into time; I gazed over a sea of tranquility so often lost in this modern age.

And there are the deer. We finally succumbed to their doe-eyes, and bought a bag of wafer-biscuits. Suddenly they were no longer shy. They instantly surrounded us, demanding their share, and more than ready to head-butt us in the back should we hold out on them. One had the temerity to approach the food stall; immediately the tiny old lady whipped out a broom and chased it away. The deer may be sacred, but they don’t get a free feed. 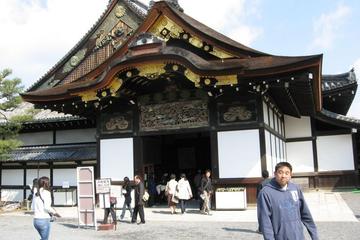 About the author:
Anne Harrison lives with her husband, two children and numerous pets on the Central Coast, NSW Australia. Her jobs include wife, mother, doctor, farmer and local witch doctor – covering anything from delivering alpacas to treating kids who have fallen head first into the washing machine. Her fiction has been published in Australian literary magazines, and has been placed in regional literary competitions. Her non-fiction has been published in medical and travel journals. Her ambition is to be 80 and happy. Her writings are available at anneharrison.com.au and anneharrison.hubpages.com

All photos are by Anne Harrison:
A deer investigating a food stall
The Todai-ji temple
The size of the Buddha is hard to appreciate
A rice paddy in the temple grounds