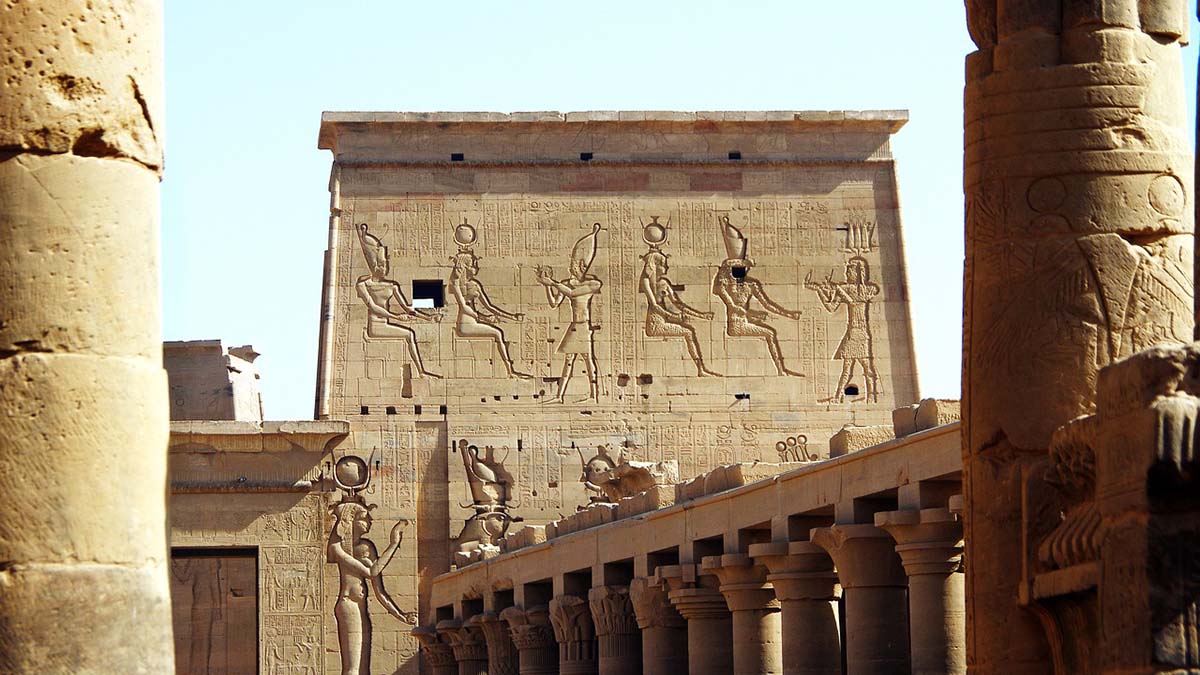 The Temples of Philae: Aswan, Egypt

We were tired after arriving in Aswan early in the morning on the overnight train from Cairo. However, it was a beautiful day, and we didn’t want to waste it so we headed off to see the Temples of Philae, which lie just south of the city on an island in the river Nile. With our guide, Mohammed, we arrived at the small jetty where boats leave for the island. 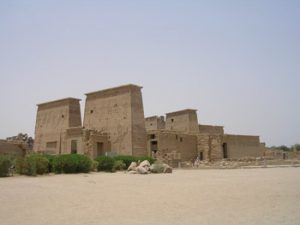 The completion of the Aswan Low Dam in 1902 meant that several archaeological sites on this part of the river, including the temple complex on the island of Philae, were consequently submerged for most of the year. The construction of the Aswan high dam further downstream, between 1960-70, threatened to leave these sites permanently underwater. Thankfully, UNESCO decided to remove the endangered temples from Philae block by block, and reconstruct them about 500 meters away, on the nearby island of Agilkia, which would remain above water after the high dam was finished. This ambitious project lasted from 1972-80.

As we approached the island, it was not hard to see why Philae was once known as “the pearl of Egypt”. Rising graciously out of the river, the temples exude an air of classical majesty even at this late stage in their history. One can only imagine what they must have looked like in all their splendor. As we docked, Mohammed explained that Philae was formerly a centre of worship of the god Isis. Egyptian mythology says that it was here that Isis found the heart of her husband, Osiris, after his jealous brother Seth had killed him, spreading the different parts of Osiris’s body throughout Egypt so that he could not be bought back to life. 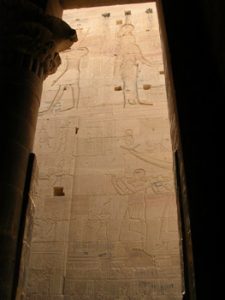 The large temple of Isis dominates the island, and this is where we started our tour. Crossing a large, open courtyard with a colonnade running down its western side, we were dwarfed by the temple’s first pylon, or gateway. Towering images of various Egyptian gods, among them Osiris, Isis, and their son, the falcon-headed Horus, are carved into its facade. Numerous pharaohs are represented here as well, doing battle with their enemies, and making offerings to the gods to ensure their victory and prosperity. The scenes still inspire a sense of awe today, not least for the amount of work that must have gone in to creating them.

The temple was mostly constructed during the reign of the pharaoh Ptolemy II Philadelphus (284-246 BC) and his son, Ptolemy III Euergetes (246-222 BC). Despite being constructed at a relatively late stage in ancient Egypt’s history, the temple follows a very classical layout. Moving inside, we entered another courtyard, which lies before a second, smaller pylon sitting at a slight angle to the first. To the right of this inner courtyard lie the remains of rooms that used to house the temple priests and guards. To the left is a mamissi, or birth-house. This type of small building became popular after the reign of the female pharaoh, Hatshepsut (1479-58 BC), and was designed to prove a pharaoh’s supposed descent from the god Horus. 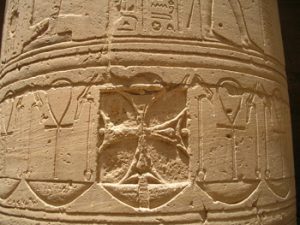 Passing the second pylon, also adorned with large images of the gods, we entered the temple’s hypostyle, or columned hall. Here you can catch a small glimpse of what the temple must have originally looked like, when much of its stone was adorned with bright colors. On the roof, Mohammed pointed out a row of painted vultures, an ancient symbol of Upper Egypt. He also pointed out a Coptic cross, cut into one of the hall’s columns during the period when the temple was used as a Christian church. Amazingly, the cult of Isis was kept alive here until the Byzantine Emperor, Justinian, finally disbanded the temple’s pagan priesthood around 550 AD. Some believe that for many years before this, Isis was worshipped on the island side by side with Coptic Christianity. 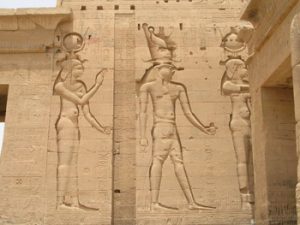 The hypostyle hall leads though several antechambers into the temple sanctuary. The walls of these rooms are covered with scenes from the legend of Osiris, depicting his death at the hands of his brother Seth, and his eventual resurrection. In the sanctuary, which once only the ruling pharaoh or the temple’s head priest had the right to enter, there still stands the pedestal for the sacred statue of Isis, used in all of the temple’s rituals. The sanctuary’s granite shrines were carried off to European museums during the 19th century, but here in the small, dimly lit room, a strong sense of ceremony still remains.

Emerging back into the glare of the bright sunlight, Mohammed led us around a number of the other small temples and buildings on the island. The oldest of these is a small vestibule built during the reign of Nectanebos I (380-362 BC), founder of the 30th and last dynasty of native Egyptian pharaohs. Also dedicated to Isis, just six of its original fourteen columns remain, linked together by a low screen wall. Close to this, on the western side of the island is one of the few remaining Nilometers. These modern-sounding devices where once used to determine the level of taxes in ancient Egypt, which changed during the year to match the seasonal level of the river. 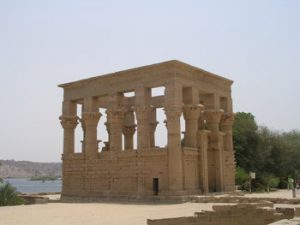 On the eastern side of the island sits a well-preserved temple dedicated to the god Hathor, built under Ptolemy VI Philometor (170-145 BC), and a large kiosk that once served as the formal entrance to the island. This building, sometimes called the pharaoh’s bed, is named after the Roman Emperor, Trajan, but may have been built earlier during the reign of Augustus. It was never entirely completed, but its remains have stood the test of time remarkably well. Ironically perhaps, the kiosk’s fourteen massive columns became an icon of Philae long before the larger and older temple of Isis, featuring on many 19th century postcards.

After finishing our tour, we headed to the welcome shade of the island’s small café for a well-deserved drink. Sitting in the middle of the now much-swollen Nile, the island provides a remarkable setting for what was once a major site of worship in ancient Egypt. At least when we were there, it seemed positively serene in comparison to the hustle and bustle of even a small Egyptian city like Aswan. As we pulled slowly away from the island in the same small boat that had bought us there, we regretted not being able to spend longer taking in the temples’ languid, tranquil atmosphere. 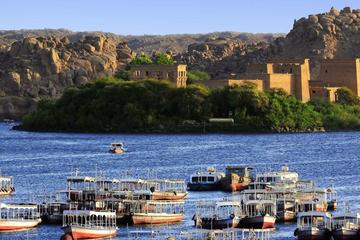 Aswan can be reached from Cairo by either plane, or by a train that also stops at Luxor on the way. From Luxor, cruise boats also make the trip to Aswan. If you haven’t organized a guided tour to the Temples of Philae before you get there, your hotel in Aswan will probably be able to organize one for you. If you want to see the temples by yourself, the point where boats leave for the island is a short taxi ride south of the city centre. This is where the ticket office for the temples is also located.

About the author:
Aaron Robertson left New Zealand in 1999, and has spent the intervening years trying to see as much of the world as possible. He currently lives in Paris, France, where he works as a freelance copywriter and musician. aaronwr@hotmail.com

Photo credits:
First Philae temple image by DEZALB from Pixabay
All other photos are by Aaron Robertson.