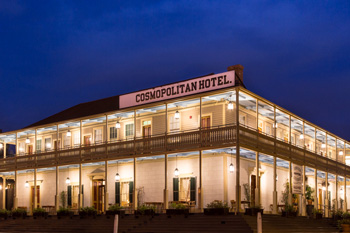 Most people walking by stop to take a photo of her. She is impressive after all. Standing two stories above a 5-foot platform and elegantly wrapped in verandas on both levels, the Cosmopolitan Hotel in San Diego California is the quintessential stagecoach hotel.

Beneath the painstakingly restored clapboard, however, lies an even deeper past. Although restored to its 1880s appearance this building actually holds the stories and perhaps the spirits of two distinctly different time periods and two different prominent men who made their mark on the history of this state. The Cosmo, as she is affectionately known, has been called one of the most historically significant buildings in Californian history. 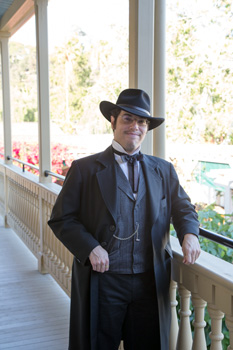 Usually in such a place, you may only view rooms from a doorway and snap a photo, so imagine my delight to find that for the same price as the Best Western a few blocks away, you can spend the night in this piece of living history.

Entering on the main level the walls are several feet thick and the temperature feels a few degrees cooler than outside. Standing here, you are actually in the original 1827 adobe home of Juan Bandini, a Peruvian born cattle rancher who built his family home here when these lands were still a part of Mexico.

At the desk I am greeted by a young man in a long tailed black coat, vest and hat. David Villegas is well versed on the history of the hotel and all things Bandini. We walk as he tells its story. 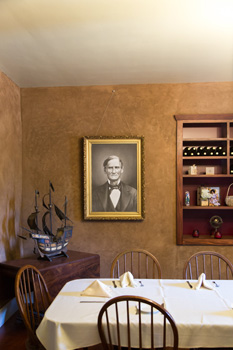 Mr. Bandini was known for both his huge parties, and his political involvement. Guests travelled long distances to attend his famous 3 day fandangos involving food, drinks, music and a favorite of Mr. Bandini’s, dancing. Though known as a gracious host, it was not all fun and games for Juan Bandini. Many important political meetings that shaped the history of California were held right here in the salon. Here, along with other prominent Californios, Bandini planned revolts against more than one Mexican ruler of the day. During the Mexican-American war Juan Bandini was an American supporter and this home was the headquarters for Commodore Stockton. It was here that scout Kit Carson was sent by General Kearny to request aid in the battle of San Pasqual.

In his later years, Juan Bandini’s fortunes dwindled and the Casa de Bandini fell into disrepair, but the purchase by Stagecoach owner, Albert Seeley and his wife in 1869 brought new life to the old Casa. The Seeley’s had a frame structure built right on top of the existing adobe, adding the second story with wrap around porch, creating a hotel to service Seeley’s growing stage coach business. This location again became the social hub of the town and one of the most important hotel-stage stops in Southern California. It is to these glory days that the current rooms have been restored. 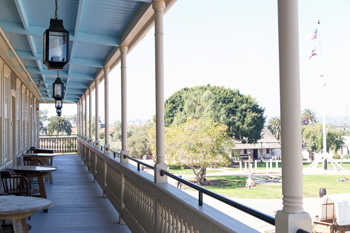 Heading upstairs and walking along the expansive 2nd story veranda overlooking San Diego’s old town, it’s easy to daydream about what life might have been like in the hotels’ heyday. Close your eyes as the dry dust rises in small clouds from the dirt streets below. Listen for the clatter of the horses pulling the stagecoach up in front of the hotel to unload passengers, weary from the 35 hour passage from Los Angeles. Imagine the laughter of the saloon crowd, the bustle of the town, and the rustle of crinolines as women pass on their way to the haberdashery. 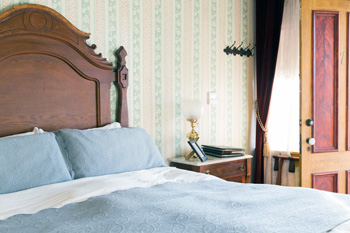 Opening the faux finished door from the veranda reveals a room filled with period furnishings. A globe shaped lamp, fashioned after the old kerosene style, sits on the table beside the dark, ornately carved bed. Wallpaper, in vintage patterns of leaves and vines form a backdrop for the thick red velvet curtains trimmed with large gold tassels. Double hung, wood framed windows on either side of the door look out onto the veranda and the town below. Each room has its own characters and features, like fireplaces or sitting rooms, though you will not find a TV in the room to distract from the authenticity of the place. The comfy cotton quilt seems like a perfect place to curl up with a book. 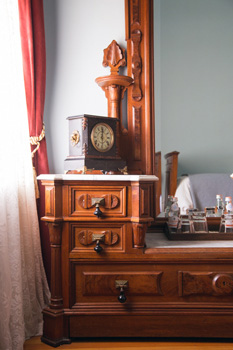 When Seeley built his grand stagecoach hotel with 20 guestrooms in 1869, it may surprise you to learn that it did not include indoor plumbing. Chamber pots and outhouses were the facilities of the day. Indoor plumbing was not added until 1930. Don’t worry though, although the 2010 restoration, overseen by teams of experts and historians, included the use of as much of the original materials as possible, the bathrooms are not original. The 20 rooms were converted into 10 unique guestrooms, accommodating guest bathrooms that include pull chain toilets, pedestal sinks, modern rain head showers and in some cases antique copper or wooden soaker tubs. It still has that 1880s feeling but with all the modern conveniences.

Before he returns to his station, I quiz David about the resident spirits. “Every day when I come in to work, I greet Mr. Bandini and Mr. Seeley. One day I experienced a glowing light orb of energy as it crossed the room and disappeared into Mr. Bandini’s portrait. I think he was greeting me back. I have also smelled cigar smoke in Mr. Bandini’s dining room, heard footsteps, and once I saw a man in a top hat on the upper balcony, when there wasn’t anyone up there.” Considering the number of visitors that have been here, it might not be too surprising if a few stayed on. A guest book rests on the night table to record any interesting experiences. 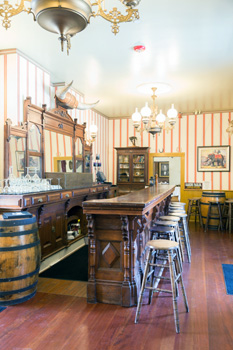 Leaving the hotel to explore, you are just steps from museums, interpretative displays artisans, shops, restaurants, and a theater. When night falls and the park closes, you are left with unique access to Old Town, to quietly contemplate what it was like for those early settlers of the Wild West.

The development of railroads brought an end to the Stagecoach business and the glory days of the Cosmopolitan hotel came to a close. Over the years the building served as a home, store, hotel, barbershop, restaurant, and an olive packing plant. From 2007 to 2010 a multi-million dollar renovation peeled back the layers of renovations from the 1930s and 1950s to reveal its 1880s splendor.

In the midst of Old Town San Diego State Historical Park, known as the birthplace of California, many tourists snap photos as they pass through these halls, on their way to dinner in the Hotel’s restaurant. Some come just to take a look at the 1880s saloon complete with gleaming dark wood bar, and whisky barrels. A few may even be searching to see if any of the resident ghosts are around. As a guest however you will have the privilege to lift the tasseled cord, marked for guests only, slipping upstairs to the guest rooms, to experience this vintage hotel first hand. This is a unique experience I recommend you don’t miss.

♦ The Cosmopolitan Hotel & Restaurant is Located in Old Town San Diego at 2660 Calhoun St, San Diego, CA 92110.
♦ The hotel has a restaurant that is open for lunch and dinner. Available for Weddings and special events.
♦ A delicious continental breakfast is included and served for hotel guests in the salon.
♦ There is so much to explore in Old Town, you should plan a whole day. The admission cost is by voluntary donation. 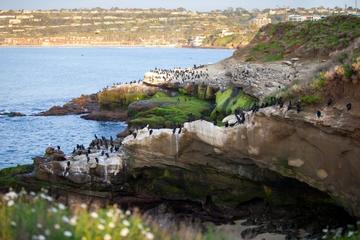 About the author:
Amy Muschik is a freelance writer and photographer. She specializes in creating Google Streetview 360° virtual tours for businesses and tourism, and her stock photography work has appeared in such places as Readers Digest UK, Disney online, and The Tonight Show. Amy’s writing and photography has been published in Travel Post Monthly, Our Canada Magazine, Great Escape Publishing, TryBelleMag.com, and Appehtite.ca. Her love of travel and photography has led her to freelance writing, and literally to the end of the earth ‘Rounding the Horn’ in South America, sleeping in a room made of ice, and zip lining across a gorge in Ecuador. When not searching for something interesting off of the beaten path, Amy enjoys life at home in London Ontario with her husband and two Australian Shepherd dogs. www.imagerybyamy.com