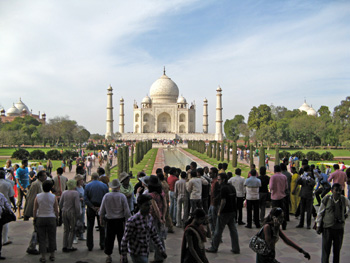 The mesmerizing marble of the Taj Mahal seems to pull us in and allow us to soak in the majesty of this experience. According to Wikipedia, Taj Mahal means “Crown of Palaces”. But, this is no palace. This is a shrine of love one man had for his favorite wife after she died giving birth to their 14th child. The Mughal emperor Shah Jahan was so intensely grieved for Mumtaz Mahal, his third wife. We are now the beneficiaries of that grief given that, centuries later, we still can admire this monument demonstrating his love for her. Immediately upon walking in through a large gate made of sandstone, the gleaming white marble mausoleum beckons to be admired in the distance. It is positioned on a large terrace, called a plinth, along the Yamuna River in Agra, India. Also located on this plinth are matching sandstone buildings that can just barely be seen above the trees from our position at the gate. We spend a few minutes here absorbing the view of the mausoleum, the meticulously landscaped grounds, and the seemingly endless reflecting pool that guides our eyes to gaze upon the building in the distance. 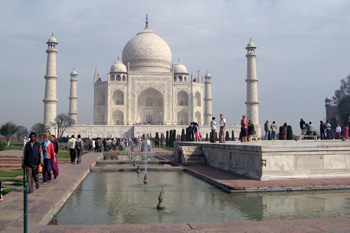 The mausoleum appears to be so far away, almost completely at the opposite end from where we stand admiring it from the southern gate. The complex on this side of the river occupies 42 acres. Regardless, the walk will be worth it.

As we stroll toward our ultimate goal, we pause periodically to take in other features of the complex. While we had entered the southern gate, we walk past matching sandstone pavilions on the east and west and the crenellated walls that enclose three sides of the complex. Continuing onward, we discover that a raised marble water tank sits in the center of the reflecting pool. We had been unable to see that from the gate platform. Standing by this water tank, we see the rest of the reflecting pool along with fountains. We are half-way to our destination. 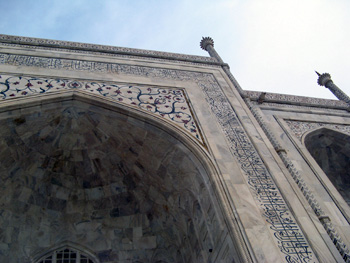 Arriving on the plinth, we can see that the mausoleum is 8-sided, but not a true octagon. Instead, the corners are chamfered to give four wide faces and four narrower corners of the building. All sides, though, incorporate vaulted archways. From here, we also have a much better view of the onion dome. Four more onion domes grace the chamfered corners. The ivory marble mausoleum sits on yet another raised platform. At the corners of this platform are 130 foot tall minarets. Our guide explains how these minarets are not quite straight. Instead, they are tilted slightly outward so they will fall away from the mausoleum if they collapse. This is a brilliant example of the detailed planning and engineering involved in constructing the Taj Mahal. 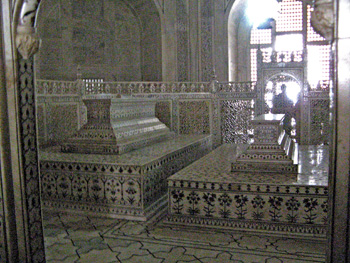 Finally standing on the raised platform, we can see the exquisite inlay of semi-precious stones in a twining vine and flower pattern above the immense archway of the entrance. Calligraphy of black marble inlay into white marble panels frames the archway as well. Our guide tells us how the calligraphy at the higher levels has been created in slightly larger script so that it appears to be the same height when viewing it from below. Again, the architects and artisans really show their skill in planning and executing this. About 20,000 artisans labored to create the mausoleum and plinth from 1632 to 1643. The rest of the complex took another decade to complete.

The outside lower walls of the tomb have white marble panels that have been sculpted with bas relief flowers and vines and include inlay stones of yellow marble, jasper, and jade. These set the stage for what we will see inside.

Despite the sunny day, the inside of the mausoleum was surprisingly quite dark, making it a little difficult to fully appreciate the fine craftsmanship of the inlay and intricate carvings. Here, we find that 28 different types of precious and semi-precious stone have been used for the inlay of twining vines, fruit, and flowers. An elaborately carved marble screen encompasses the sarcophagi of Shah Jahan and Mumtaz Mahal. 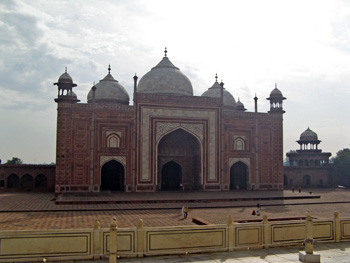 Looking beyond this screen, it’s startling to see the positioning of the sarcophagi. Everything else in this complex has been so painstakingly symmetrical, that it’s jarring to see the symmetry interrupted here. The tomb of Mumtaz Mahal had been placed in the center. Shortly after the completion of the Taj Mahal, one of Shah Jahan’s sons deposed and imprisoned him for the rest of his life. Surprisingly, this same son decreed Shah Jahan’s tomb to be added to the side without disturbing the original tomb. We discover later, however, that these are not the real sarcophagi. As per custom, the real ones are located in the same positions in the less elaborate lower level of the mausoleum and are inaccessible to visitors.

Back outside, we take a brief look at the two other buildings that share this plinth and symmetrically flank the mausoleum. These are the buildings that we could barely see above the trees while standing at the opposite end of the complex. The building to the left of the mausoleum is a mosque and the other is the Jawab or guest house. Rather than marble, these are built with red sandstone and white marble inlays. The red sandstone buildings lend a pleasing view without detracting from the gleaming white mausoleum. 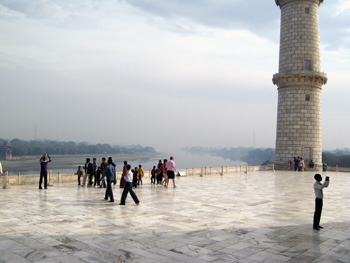 We also venture to the back and finally discover the river that had been hidden from all the other vantage points. We find out later that another garden had been created on the opposite bank of the river in order to best view the mausoleum in the moonlight. Unfortunately, this garden on the other bank has fallen into disrepair.

Making our way back to the entrance gate, we pause a few more times to admire the garden areas and try to imagine how the original gardens looked with numerous types of flowers and fruit trees. At the end of the 19th century, the British had taken control of the Taj Mahal and redesigned the gardens into the more formal style they enjoyed back in England. We also realize that despite all the crowds, we had not felt rushed through the complex and had ample time to soak in the serenity of this beautiful monument of love. 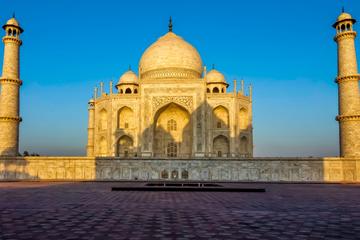 ♦ We stayed at the Oberoi Amarvilas which boasts a view of the Taj Mahal from each room. If you have a balcony, splurge for room service for one of your meals so you can enjoy the view with your loved one.

♦ Agra was just one stop on our 15-day escorted tour with Travcoa. While it’s possible to visit India on your own, we highly recommend a guided tour with high-end accommodations in order to take the stress out of getting from one city to another and finding suitable dining options.

About the author:
Marilyn is a freelance writer. She and her husband have been extremely blessed to have visited all 50 states in the USA and over 60 countries. They enjoy factory tours and getting behind the scenes. They also ask many “how” and “why” questions to satisfy their curiosity. Their blog is: travelwithcuriosity.com

All photos by Marilyn Escue:
Taj Mahal with reflecting pool
Raised marble water tank and fountains
Inlay and calligraphy on the front of the mausoleum
Sarcophagi of Shah Jahan and Mumtaz Mahal
Mosque
View of Yamuna River