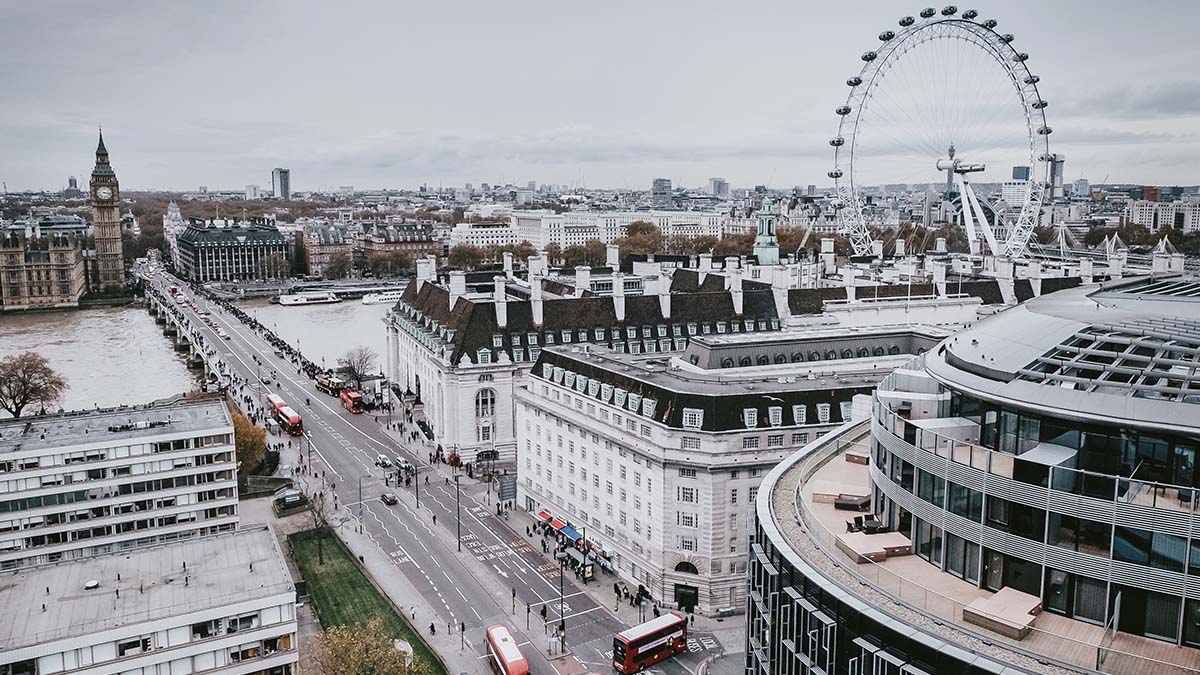 The Architectural Jewels of London

England’s Thames River is one of the most celebrated bodies of water in the world. The section that runs through London and its outskirts has inspired artists for centuries. On my last trip to London, I discovered the reasons for its reputation when I toured the river on two boat trips: one from Westminster Pier in London to Greenwich Pier, the other from the city of Richmond to Hampton Court. 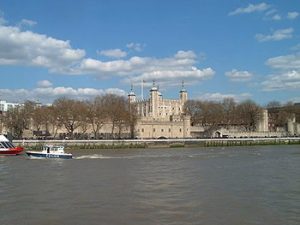 One of the first things you notice on any Thames trip is how many of England’s political, economic and cultural icons are situated on its banks. Chief among them is The Palace of Westminster, the home of the British Parliament, with its famous Clock Tower and Big Ben bells. Although this site has been occupied by England’s rulers since King Canute built his residence here in 1016, most of the sprawling neo-Gothic structure you see today only dates back to about 1840-1870. This is because the bulk of the older palace was destroyed in 1834 by a fire. Westminster Hall is the oldest surviving remnant, dating back to 1097. The hall has seen its share of coronations, royal trials and funerals. It’s still used every year by the Queen for the State Opening of Parliament. 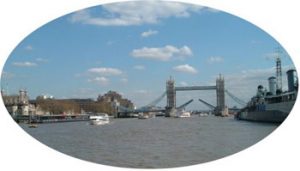 Further east along the river lie the Tower of London and the Tower Bridge. The bridge opened in 1894, but the Tower is much older. Ironically, this foreign-looking Norman fortress built of French stone is considered the most important castle in English history. In 1078, William the Conquerer ordered its construction to protect his new territory from invaders, and to overawe and terrify his new English subjects. William took advantage of the work of earlier conquerors and built his fortress into the side of a Roman wall. For five centuries, in addition to defensive purposes, the Tower served as a royal residence. After that, the building became primarily a prison and place of execution. The wheels of fate have turned again, and today the castle is one of the city’s top tourist attractions. In addition to showing off the Crown Jewels, its current promoters like to play up its lurid past; the Tower has seen its share of murdered innocents — Anne Boleyn, Lady Grey and the Little Princes, to name just a few. Even now, the building gives off a foreboding aura and looks as if, at any moment, blood may start to run down its lily-white walls. 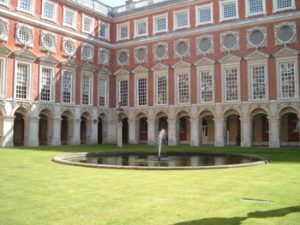 Hampton Court Palace, on the other hand, twelve miles west of the London, impresses visitors with a very different sensation. Is it the red brick walls, the chimney pots, or the sixty acres of gardens that enclose it on three sides that makes it feel so warm and domestic? Perhaps this aura has something to do with the fact that it was originally built as a home for a private citizen, Archbishop Wolsey. Historians tell us that Wolsey’s new home was so grand that it inflamed the jealousy of the king. Word soon spread that Henry had plans to seize the property and throw the cardinal in prison. To escape this fate, Wolsey offered the property to the King as a gift instead.

The Queen’s House, at Greenwich, is another former royal residence. For readers with a taste for the romantic, this one comes with a tragic tale. King James I originally planned it for his wife, Queen Anne. Construction began in 1616 but before it could be completed, Anne died. Work on the building was abandoned for ten years, when another king, Charles I, took it up again and had it finished for his wife. Later, the building served as a naval school and it is now part of the National Maritime Museum. The American White House was based on this serene and classically inspired building.

Given the number of palaces that dot the Thames, it’s easy to picture the parade of royal barges and boats filled with liveried nobility floating down the river from one luxurious home to the next, entertained by musicians playing Handel’s Water Music. But this famous royal highway has always been shared with “tinkers, tailors, soldiers and sailors” as well. You can still see the architectural legacy that England’s commoners left behind, in the wharves, warehouses, mills and factories that line its banks. 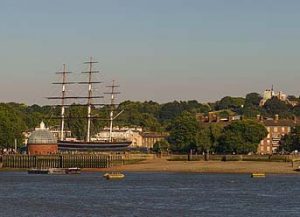 The Romans were the first to make London an international port back in the first century A.D. During the sixteenth century the area became a major shipbuilding centre. In the eighteenth century the port was crowded with the world’s ships waiting to dock and unload. Throughout the nineteenth century and right up to the World War II, London’s port was the busiest on the planet. If you want to learn more about the role of the port in England’ s economic history or just hear some stories about the “romance of the sea,” disembark at Greenwich and make your way to the National Maritime Museum. While you’re there, stop in and pay a visit to that old tea clipper, the Cutty Sark, too, which lies just off Greenwich Pier.

While the heroes of England’s imperial and seafaring age were her mariners, the heroes of her industrial revolution were her factory workers. Their home was then Southwark, on the south bank of the Thames. Many of the factories and warehouses that laborers used to haunt have been converted into pricey condominiums, but the structures still retain a pragmatic, workaday look. Dickens, who at the age of twelve was held in debtor’s prison in this district, described the lives of workers in this area in some of his books. 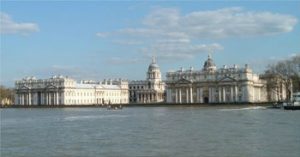 The Thames has been called “a string of pearls,” a fitting description when you consider numerous cultural sites that line its banks. One of the most striking jewels is Somerset House, constructed for King George III and opened in 1776. The current building boasts dramatic entrances on both the Strand and the Embankment sides. The structure was designed to house not only the offices of the navy, the tax office and the royal barges, but the Royal Academy of Art, the Royal Society and the Society of Antiquaries. Today, the grand neo-classical building shelters The Courtauld Institute of Art, Gilbert Collection and the Hermitage Rooms.

Another cultural gem that travelers can spot from a boat ride on the Thames is Shakespeare’s Globe Theatre, or rather a faithful reconstruction of the original Globe that once stood a few streets south of this location. The building which opened in 1997 is constructed of oak and water reed thatch and covered in white lime wash. Even if you don’t get a chance to see a play, you can still take a guided tour and visit a permanent exhibit about the history of theatre. Fans of the stage will also be happy to catch a glimpse of the twentieth-century National Theatre and Royal Festival Hall as they glide along the Thames.

London is a city of monuments, and the most famous one of all is simply called The Monument. That spire you see from the river was designed by the city’s most famous architect, Christopher Wren, to commemorate the Great Fire of 1666. After the disaster, Wren almost single-handedly rebuilt London’s churches, including his famous masterpiece: St. Paul’s Cathedral. Its impressive dome looms large on the city’s skyline and is the second biggest in the world.

Most of the beloved treasures along the Thames have stood the test of time. However, there are some recent additions of note. Three in particular that opened around the millennium come to mind. 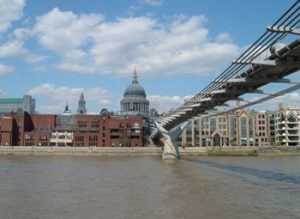 There’s the Tate Modern Art Gallery, opened in May 2000, which is housed in a converted power plant. Nearby is the Millennium Bridge (opened in June 2000), a pedestrian pathway connecting St. Paul’s Cathedral with the Tate. The narrow structure rests upon tapering metal pier heads that resemble the upturned fins of sea monsters. Perhaps this explains why it’s so shaky and had to close down two days after it opened when it began to sway uncontrollably. After tests lasting two years, the bridge reopened. However, it still feels.well, wobbly!

Finally, there’s that striking new landmark, the London Eye. In what looks like the world’s biggest Ferris wheel (technically, it isn’t one), adventurers can ride the 140 meters to the top for a unique view of the Thames and London at large.

It remains to be seen whether recent additions to this history-drenched landscape will be standing beside their famous fellows a hundred years from now. We can only hope that the older treasures that have lined its banks for so long will remain as well, a century from now, to awe and inspire future visitors to the Thames.

About the author:
Guylaine Spencer is a Canadian writer specializing in travel, history and the arts.
Contact: www.freelancesuccess.com/guylaine