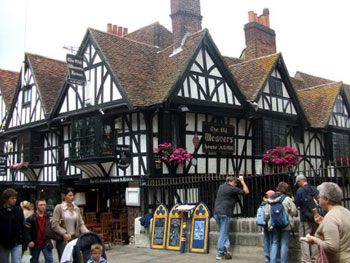 Canterbury and its cathedral has withstood centuries of religious change but has remained England’s center of Christianity for over a thousand years. I had the privilege of visiting the cathedral during a trip to England in 2007, and it was a memorable experience. As the train chugged through the outskirts of Canterbury toward the station, I glimpsed to the right and saw the magnificent cathedral’s spires rising high above the ground. After leaving the train station I walked next to West Gate Garden, a lovely little park that sits on the River Stour, with its bright, colorful flower beds, and through what is literally the stone gate that leads into the west side of the city – West Gate Tower. The medieval streets were bustling with activity, and as I strolled past the Old Weaver’s House, dated from the early 16th century, I heard the lilting notes of Wang Shun Xin as he played his Chinese flute under the shade of a nearby tree. 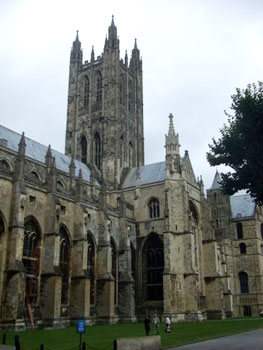 The great cathedral, towering over the city, beckoned to me. As I walked closer, my heart stirred as I anticipated walking among a place that holds such a strong significance in England’s amazing history. There are two events connected to the cathedral, events that tell a story that’s both rich and bittersweet. Though this story, and Christianity in England, begins in the late sixth century, Britain’s history goes back even further.

During the Iron Age (approx. 750BC – 150AD), Britain experienced the migrations of the Celtic peoples from Eastern Europe. These people would establish many tribes throughout the island, bringing with them highly developed craft skills and artistic achievements. Overlapping these events was the rapid expansion of the Roman Empire in Europe (approx. 150BC – 50AD). Despite this expansion, Britain was not attacked by the Romans until 55BC and 54BC by Julius Caesar. Caesar was pushed back both times, and it wasn’t for another century, in 43AD, under the reign of Emperor Claudius, that the Romans would launch another attack. Landing at Richborough, Kent, they attacked the local tribe (Cantii) and settled. Over the next 4 centuries Roman culture would spread and influence many aspects of early British society.

On the continent Christianity was a minority religion, struggling to find a voice among the ancient traditions of Roman society. This voice was often silenced by gruesome violence, but in the year 324AD Constantine the Great made Christianity the legal religion in his empire. Under Constantine, Christianity in the Roman Empire would gain prominence and become fairly established and organized.

In Britain, with the coming of the Romans, trade routes to and from the continent were opened, and merchants brought their business to Britain. These merchants also brought Christianity with them, but as there wasn’t a strong guiding hand to maintain cohesiveness it was quite disorganized and scattered throughout southern England. Also during this time the Anglo-Saxons were settling the island and establishing kingdoms; indeed each kingdom had its own king, but the Anglo-Saxons were a pagan people, and paganism was thus the majority religion. This would change with Gregory the Great.

Gregory was born into a noble Roman family in 540AD. After a successful secular career as a Roman official, he became a monk and would later found six monasteries in Sicily. He became Pope Gregory I in 590AD, becoming the first monk elected pope. He was also the first pope to sponsor missions work.

In 595AD Pope Gregory began contemplating missionary activity in Britain. According to the Venerable Bede (Ecclesiastical History of the English People), Gregory saw some attractive fair-skinned boys for sale in a slave market in Rome, and inquired as to who they were. He was told they were Angli (Angles) from Britain, and pagans; Gregory replied that they were not Angli, but Angeli (not Angles, but Angels) and deserved to be fellow heirs with the angels of heaven – they and their people ought to be converted to Christianity. A year later the pope commissioned Augustine, the prior in charge of his papal monastery in Rome, to cross the channel to the distant island with 40 other monks and work among the Anglo-Saxon peoples. 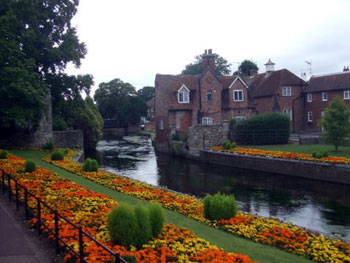 Augustine and the monks arrived in Canterbury, the seat of Ethelberht, the Anglo-Saxon king of Kent, around Easter 597AD. The missionaries were given a polite but cautious welcome. King Ethelberht, despite his suspicion, was impressed by the monks’ sincerity and allowed them to preach. The king and his people would eventually be won over to the Christian faith, and over the next couple of years Ethelberht would see the conversion of his people. Christianity would continue to grow in the area and Augustine would become the first Archbishop of Canterbury; there have been 104 ever since. And he would also establish the Abbey of St. Peter and Paul outside the city walls, the ruins of which are still visible today (www.english-heritage.org.uk).

The cathedral saw much reconstruction and redesign over the next several centuries, but it was the story of Thomas á Becket that put the building on the historical, and literary, map. Becket was born in London in 1118 AD. He was well-educated, training as a knight before becoming a clerk to Theobold, Archbishop of Canterbury at the time. Becket was also a close and personal friend of King Henry II, who would appoint him Lord Chancellor. Archbishop Theobold died in 1162 AD, and Henry appointed Becket to take his place. With this appointment Henry thought he would have an ally in England’s highest ecclesiastical office. The king was wrong, however, and there were two issues that proved to be the archbishop’s undoing.

Across the channel in Europe, the Church was struggling with reform issues. Clergy unworthy of their offices were breaking many canon laws – adultery, carrying weapons, inability to perform Mass – and archbishop Becket, wishing to uphold the rights of the church, felt that the erroneous clerics should only be tried in the church courts and be defrocked; Henry felt these clerics should be tried through the royal courts and receive due punishment. As a result of this friction the king established the Constitutions of Clarendon, a very pro-royal list of customs regarding church-state relations. At first Becket agreed with the provisions set forth in the document but later reneged, and as a result of this refusal to acknowledge the royal document he fled to France. This was the first issue that would put a wedge between the archbishop and King Henry. 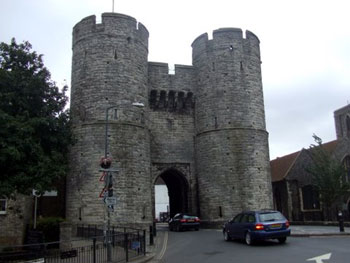 The second problem involved the king’s eldest son, also named Henry. In 1170 AD the king wished his son, also named Henry, formally crowned as king so the boy would succeed him as the next king of England when the elder Henry died. Normally the Archbishop of Canterbury presided over the ceremony, but as Becket was in France the next most powerful cleric in England, the Archbishop of York, presided in his stead. Becket of course was opposed to this and came back to England to excommunicate all the bishops that had taken part in the coronation. Becket also threatened to put England under interdict – a censure that forbids participation in most sacraments. King Henry, exasperated, had had enough.

“Will no one rid me of this turbulent priest?”

Was Henry speaking literally or was he just expressing his frustration? Although we will never know the king’s true intentions, four of his knights took his words to heart and murdered the archbishop in the cathedral on December 29, 1170. Becket was canonized shortly after and a shrine was erected in his honor. The shrine became a pilgrimage site for thousands of Christians and became the inspiration of Chaucer’s Canterbury Tales in the fourteenth century. The shrine was destroyed by Henry VIII during the religious turmoil of the English Reformation in the sixteenth century, and the only surviving evidence of the shrine is a burning candle marking the place where it stood.

Today, Canterbury remains a vibrant place of worship, holding close to 2,000 services a year. Though the city, cathedral, and indeed the Church of England has witnessed a long and complicated history, it has stood the test of time, a testimony to the hardiness and durability of the English people, and is one of the most visited and well-loved places in England. 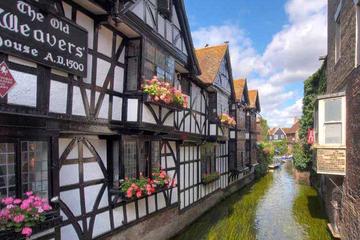 Canterbury is well served by the Motorway network with both the M20 and M2 providing links to the rest of England. There are several car parks in the centre of Canterbury and a park and ride scheme operates with buses running at 7-8 minute intervals from designated areas on the outskirts of the city right into the city centre.

South Eastern run regular train services from London Victoria and London Charing Cross to both Canterbury East station and Canterbury West station. Upon arrival at either Canterbury station the cathedral is a short walk into the city.

For visitors travelling by Eurostar to Ashford there is a frequent train service running between Ashford and Canterbury West.

About the author:
Kathy Simcox lives in Hillard, Ohio. Ms. Simcox is an office associate in the Arts and Humanities at Ohio State University. She holds a BA in psychology from Ohio University and a 2nd B.A. in Religious Studies from Ohio State University. She has a love of teaching English history and has taught two courses she developed, Morsals of Christian History: Europe and England, and The English Reformation, at her church, at Terra Community College in Fremont, Ohio, and at the Ohio State University Urban Arts Space in Columbus. She has done over 40 lectures on her trip to England and has had two other articles published on travelthruhistory.com about places she visited. She enjoys traveling, writing, kayaking, hiking, biking, cross country skiing, swimming, Irish music (she plays the Bodhrán), British comedies, and Guinness. She is also known to pick up an occasional book, preferably historical fiction. You can contact her at simcox1@gmail.com.