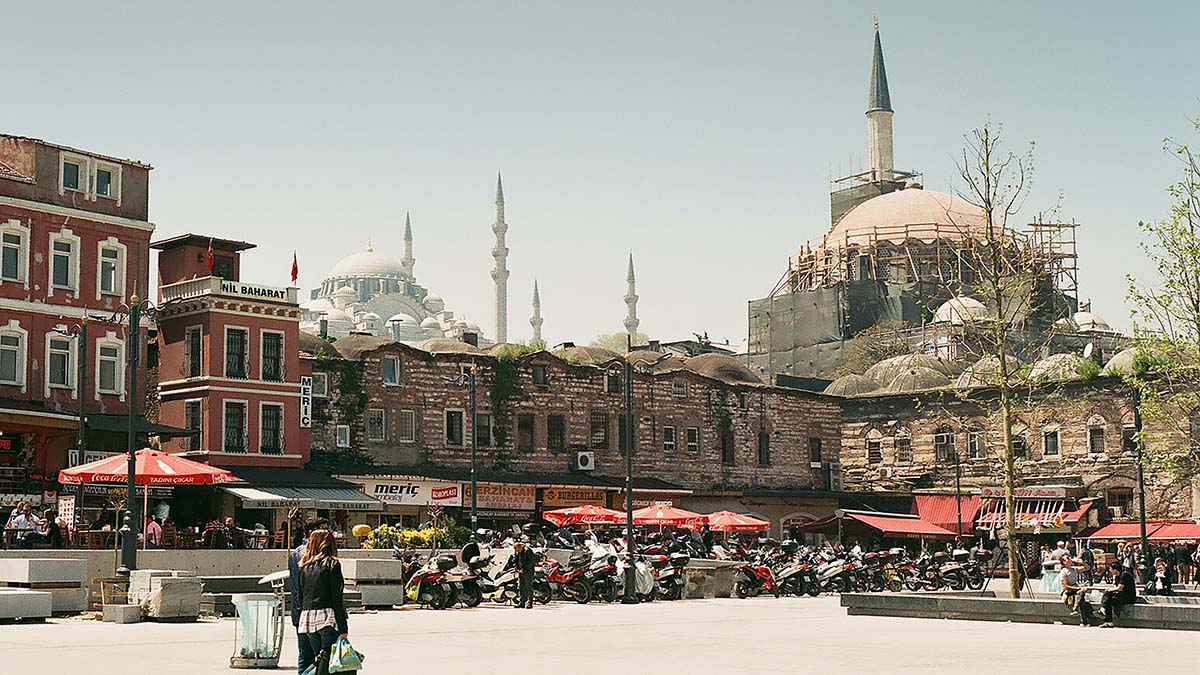 Last April, I was in Istanbul when United States President Obama paid a visit to the city. We followed the same itinerary, except I didn’t have the political meetings that Obama had. It was Obama’s first visit to a country where ninety percent of the people are Muslim. He is there to highlight Turkey’s importance in a growing world market. I am there on my second visit to the city to write about how it has changed in the last ten years. 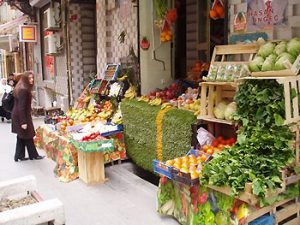 Flying into Istanbul as the sun flickers over the eastern shores of the Bosphorus Straits, the vastness of the city strikes an emotional chord in me. It takes forty-five minutes to drive swiftly from the airport to downtown. Hundreds of thousands of multi-floored, flat-roofed buildings house, at last count, most of the seventeen million people. The population has doubled since my last visit, but I find that, outside the rush hour traffic, Istanbul feels not crowded, but calm. There are buses, trams, trolleys, taxis and an ancient underground – as well as walkways to easily maneuver the city. However, President Obama isn’t using any public transport – only a military plane and a car cavalcade.

My taxi drives up to a modern hotel, called the Titanic – as sleek as its namesake – just off Taskim Square. Across the massive open Square is the old district of Beyoglu, with it web of streets lined with beautiful old buildings housing modern businesses and restaurants. An ancient tram car runs from the waterfront up the hill and through Beyoglu. As the day begins, locals and visitors are hopping on and off the tram to shop, drink coffee, eat and enjoy the moment. Morning hours drift away over Turkish coffee in discussions and debates. Unfortunately, time does not allow the President to experience this aspect of Istanbul for he is only here for the day. 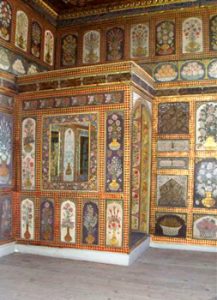 From Beyoglu I can see the 14th century Galata Tower, originally built in the 5th century to spot fires in the city. Today’s world is more concerned with other things. The tower is a perfect first place to experience a panoramic view of Istanbul. After taking a cab there, circular steps and a lift carry me to the top of the ancient tower to savor the scene of the sun beaming over the minarets and domes, mixing with the background of chaotic sounds: calls-to-worship from the Muslim mosques, church bells, blaring sirens and ships’ horns. Perching on the top floor of the tower is much better, I think, than seeing a city from a plane.

Going down to the street again, I dash over to the upper level of the Galata Bridge which throbs with a spirited street market and hordes of fisherman. Going to the lower level, I throw myself into the chaos, all my senses bombarded, and select what to eat. Deep-fried squid makes for a great mid-morning break.

Walking the different neighborhoods of this vast city is the best way to get to know its diversity, its peoples from many parts of the globe, and its exotic sounds, sights, smells and flavors. A sampling of the most important buildings provides an insight into whom and what has developed this complex city. I focus on just a few, finding that my itinerary is exactly the same as President Obama, but at a different time. Too fully explore them all would take a lifetime, but we don’t have that time. I start with the grand Topkapi Palace, an expansive structure overlooking the Bosporus and Sea of Marmara. It could take days to explore so I just focus on the impressive collections in the Imperial Treasury and the rooms of the Harem where the Sultan, his wives and concubines lived. I try to imagine what life must have been like, but I am distracted by the many Turkish women dressed like me, with only some wearing scarves on their heads. 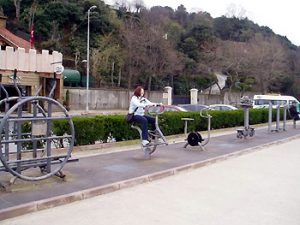 From those places of luxury, I walk through the Sultanahmet Square’s spring gardens of daffodils and tulips to the Sultanahmet Mosque with its perfect domes and sky-reaching minarets. Many Turks are in the mosque as I walk shoeless into its inner sanctum of perfect stillness – so profoundly different than the outside hustle. A brief time later, I enter Hagia Sophia, a mosque turned into a Christian cathedral, and that opens my mind to blending of religions and the world of Byzantine frescoes. Rounding off the experience I move on to the Blue Mosque with its elegant rounded domes.

After all that sightseeing, I manage to find my way to the Spice Market, much like a Farmer’s Market, and then onto the huge Grand Bazaar – an exotic ancient shopping mall that offers buyers the ordinary with the extraordinary. The air drips with the smells of coffee, spices, and dust. 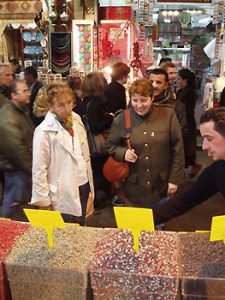 The city is abuzz with speculations of where Obama is now. I decide to head out and miss the party. The traffic is too congested. I take a ferry up the Bosphorous. Along its shores, the houses are like solid matrons – all with freshly painted make-up. I get off and walk awhile to savor the stillness and to have dinner at Bile Mer, Fish of the Sea. A variety of vegetables accompanied by dips is followed by a whole grilled white fish, plus a small custard and coffee. During that time, President Obama has an elaborate dinner with Turkish President Gul, after meeting with students at the university, and leaving them with the message that “States are like big tankers, they’re not like speedboats. You can’t just whip them around and go in another direction.” When I turn round and return into Istanbul, Turks happily report that Obama is effectively promoting the idea that America can work with a Muslim country.

Upon docking, there is a massive traffic jam on the roads as the President is taken back to the airport. I decide to head off in the opposite direction to find the Museum of Modern Art, a large shed-like building on the waterfront for an evening visit. To understand a culture, I like to examine its art. The results of Ataturk sending Turkish artists to study in Paris, France, during 1930-40s grace the walls of this gallery. The variety of art has a sophistication of the abstract form that is world class. It is an excellent example of how exposure to new ideas and ways can make a difference. Too bad Obama had to miss this exhibition.

Istanbul is a city where the present moment sits together with the best of the past. A visitor who comes to Istanbul to experience some of the infinite variety in the city will depart with a greater understanding of the constancy of change and a heightened belief that people can work together. I know I did. 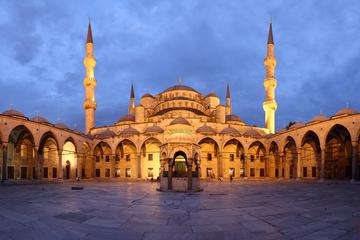 You will get personalized and good travel support with flights, hotels, tours, and guides Fahrettin Gokay at Vanguard Travel Service, Istanbul. Contact: info@vanguard-ts.com;  or call +90(216)5671385

For a central hotel try Titanic City Hotel, Taksim Square, Istanbul at www.titaniccityhotel.com. For other hotels, go to www.Istanbul-hotel.net

One of the great places to visit beyond the usual is the Istanbul Modern Museum in Karakoy.  It also has a marvelous cafe and restaurant.

About the author:
Sandra Harper is a world traveller. She flew to Istanbul last April while she was volunteering in Kenya. Next on her agenda is wine tour in the Okanagan and an exploration of Jordan. She writes travel articles and has four books published. See them at www.hawthornepublishing.com.

Photo credits:
Rüstem Paşa Cami, Istanbul, Turkey by Svetlana Gumerova on Unsplash
All other photos are by Sandra Harper.