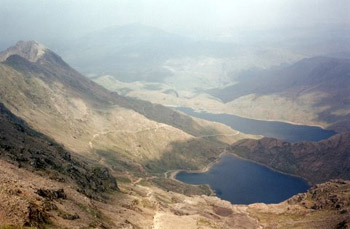 The view from the summit of Mount Snowdon, when the cold wet mist evaporates from the barren slopes, is a vista of yellow-brown hills and intensely green meadows. Far below the precipitously steep cliffs, a river flows through a valley where the stone houses of Llanberis village nestle beside twin lakes. This rugged region of North Wales served as a training ground for Sir Edmund Hillary’s mountaineering team before their ascent of Mount Everest in 1953. British climbers still train here for the Himalayas.

As the sun moves out of the clouds, the rocky summit is silhouetted against a clear blue sky, and the breath-taking panorama of green slopes, deep chasms and towering rock faces become visible. It is easy to see why the Welsh call this area of North Wales known as Snowdonia, Eryri, the land of the Eagle.

Being of Welsh heritage, to climb Snowdon had been my life-long dream, however when I arrived at the town of Llanberis (pronounce the double “Ll” as a guttural slur), my enthusiasm was dampened by the weather. A fine Welsh rain was falling. Ruddy-faced Welshmen wearing Wellingtons and tweed caps hurried into the shelter of the nearest pub. A thick shroud of ominous clouds hid Snowdon’s peak. I wondered if my journey had been in vain. These mountains can be treacherous for hikers and it isn’t advisable to venture up into the hills in inclement weather where the mist and rain can close in with an alarming speed. 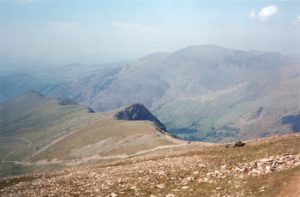 The village of Llanberis is nestled among some of the highest mountains in Wales. The loftiest peak, Snowdon (1,085 metres) is the highest mountain all of England and Wales. These mountains were the stronghold of the fiery Welsh patriot Owen Glendower, who waged war against the English for ten years, from 1400 until he vanished without a trace. His legend lived on for centuries and took on the attributes of the ancient gods of Snowdonia.

The legends of Snowdon are of giants and demons who battled in the clouds hurling red-hot stones into the valleys. Snowdon, in Welsh Wyddfa means “burial place” and was said to be the home of the legendary giant Rhitta Gawr who was renowned for his coat made of the beards of his vanquished enemies. He is said to be buried at the foot of the mountain.

My journey to Snowdonia began with a nine hour coach trip from London to the town of Caernarfon, situated on the west coat of Wales by the southern end of the Menei Strait. 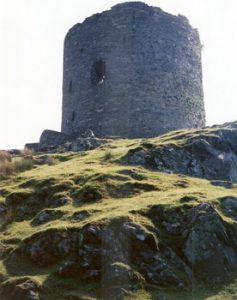 The dark towers of Caernarfon castle loom over the town. On these stone ramparts sentries once scanned the horizon for the rebel armies of Llywellyn ap Gruffydd. King Edward I built this massive fortress, along with eight others, between 1277 and 1295, in order to conduct his military campaign against the Welsh. Caernarfon, the largest and strongest of them all, with massive walls and twelve towers, is where the English Prince of Wales is invested with his title. Prince Charles was invested here in 1969.

The Welsh, who call their country Cymru, are fiercely nationalistic in North Wales, and Welsh is the spoken language. Here the fabled figures of Welsh myth and history lived: Merlin, the magician of King Arthur’s court; the rebel leader Owen Glendower; the martyred Prince Llewelyn the Last, and Owen Tudor whose grandson Henry defeated Richard III at the Battle of Bosworth Field. He became King Henry VII, the first Welsh king of England.

North Wales is majestic, a land of mountains and streams, massive medieval castles and stately country homes now converted to museum and hotels. It was the home of the poet Dafydd Ddu Eryi and the novelist T. Rowland Hughes, whose home “Angarfa” is now a museum in his memory. 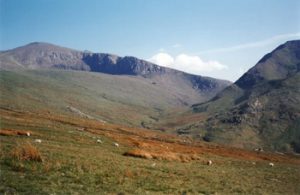 The road to Llanberis, a short bus ride from Caernarfon, winds past meadows and stony slopes where sheep graze on the sparse grass and patches of lavender. It is like a scene from a fairy tale. The area is steeped in legend. Tales are told of the fairy folk, Tylwyth Teg, magical creatures who can put unsuspecting mortals under their spell.

At the outskirts of Llanberis, across the emerald fields, the single gray stone tower of Dolbardarn castle rises above a grove of oak trees. This old, ruined castle, situated between the twin lakes of Llyn Padarn and Llyn Peris in the Llanberis Pass, is one of Wales’ oldest castles, believed to have been built and occupied from about 233 B.C. It was once used as a prison for Owain Goch, who languished there for 23 years, locked up by his rebel brother Llewelyn the Great. Dolbardan was the last Welsh stronghold to be surrendered to Edward I after the death of Llewelyn in 1282. 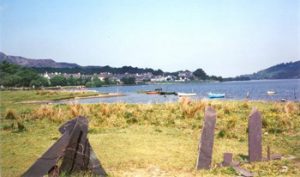 Located at the foot of Snowdon, on the shores of the twin lakes, Llanberis is a traditional centre for climbers and walkers. Of the six routes to the summit of Snowdon, the path from Llanberis is regarded as the easiest, the longest (8 km) and the most popular. There is plenty of reasonably priced accommodation in the town of Llanberis, and many things to see in the immediate vicinity. Attractions include the Museum of the North, the Welsh National State Museum, craft workshops and the narrow-gauge Llanberis Lake Railway.

The local folk heroine was Marged Uch Ifan, known as “Queen of the Lakes”. She could make and play harps and outshone the local men at most tasks such as rowing, wrestling, hunting and fishing for torgoch, a fish unique to these lakes. A boat said to be hers, was found in the bottom of Llyn Padarn, and is in the Llanberis museum. 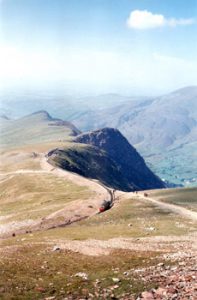 The Gilfach Ddu slate workshops, built in 1870, have a display of original equipment and puts on a demonstration of the art of slate-splitting. Once an ancient bard prophesied that the stones of Mt. Snowdon would be turned to bread. Years later, Snowdon became a major slate industry, ensuring employment for thousands of men and women in the area. Slate is used everywhere, from the roofs of the stone-built houses to the pavement on the narrow street.

The morning after my arrival, I set off with the intention of climbing at least part way up the mountain. It was early June, fine weather for walking, but Snowdon’s conical peak was still shrouded with a thick, furry cap of gray cloud. I was well prepared for the trek: comfortable walking shoes, a layer of warm clothing, a rucksack packed with waterproofs, first-aid kit, whistle and local map. Still, the weather looked unpredictable, and after careful thought, I opted to ride up on the little single-track locomotive run by the Snowdon Mountain Railway. The train goes right up to the summit, a long slow haul of 55 minutes.

The coal-fired steam engine pushes the coach in front, up the mountain. The views from the window are spectacular. The track meanders up the steep slopes, winding along the crests of the hills, past crumbling ruins of farm houses and stone walls. The rock-strewn fields are almost colourless, the grass bleached pale green. Tiny alpine lilies and heather cling tenaciously among the boulders. Grazing sheep have stripped the mountain slopes to the bone. Although Wales has only two million people, it has six million sheep.

By the time we reach the summit, the mist has evaporated and Snowdonia’s lofty mountain ranges unfold in a view of breathtaking beauty. The entire region is criss-crossed by dozens of well-trodden footpaths leading down into the lush valleys. 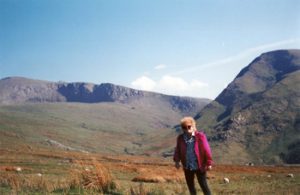 Sunshine lit up the entire countryside from Snowdon’s barren slopes to the distant verdant fields of the Druid’s isle, Anglesey, in the gray Irish Sea. I breathed in the fresh, cool mountain air, overwhelmed by he sensation of being atop this enchanted mountain. I felt as though I truly was under the spell of the magical Tylwyth Teg.

I walked down the mountain, an easy three hour descent along the Llanberis Pass trail. The path winds along the same twisting route as the rail line. The pace is gentle. Tourists and locals, seniors and children share the path, some with canine companions.

I looked back. Snowdon’s peak was again hidden by a swirl of white mist. But far below, where the tranquil village of Llanberis lies sheltered between the mountains, the twin lakes of Llyn Padar and Llyn Peris shimmer like pewter in the bright afternoon sun.

TRAVEL ADVISORY: Those unaccustomed to hill walking should use caution and common sense. Wear sturdy shoes or boots, warm clothing, and take food, a first aid kit, a flashlight and a whistle. Good maps such as ordnance surveys and a compass are also essential if you are going on he less frequented trails. These maps are available anywhere in Snowdonia. Paths are well marked, but often the signs don’t indicate exactly where they lead or give the distance you must travel. If you want to make an overnight trek, you will most certainly be granted permission to leave some of your luggage at your guest house, especially if you reserve a room there for your last night’s stay. It is wise to let someone know the details of your route and allow yourself plenty of time to return before dark. The weather in Snowdonia is notorious for its changeability. Don’t hesitate to turn back if the weather gets worse or the route is too difficult for you. Organized treks are available in the area and usually include accommodations and some meals, guide service and local transportation.

THE SNOWDON MOUNTAIN RAILWAY: The trains run from mid March to November 1, weather permitting, with a minimum of 25 passengers. Journey to summit: 1 hour.

GETTING THERE: Buses from Caernarfon to Llnaberis run frequently throughout the day from the main square opposite the castle in Caernarfon.
There is also a train from Bangor. Trains and buses run from London.
Accommodations in guest houses are available in Caernarfon and Llanberis.

About the author:
W. Ruth Kozak owes her Welsh heritage to her father who was born and raised in Caerphilly, South Wales and worked as a miner until immigrating to Canada in 1931. She has visited Wales many times, and climbing Snowdon was a dream-come-true experience. Her website is www.RuthKozak.com

Photo credits:
All photos are by W. Ruth Kozak.