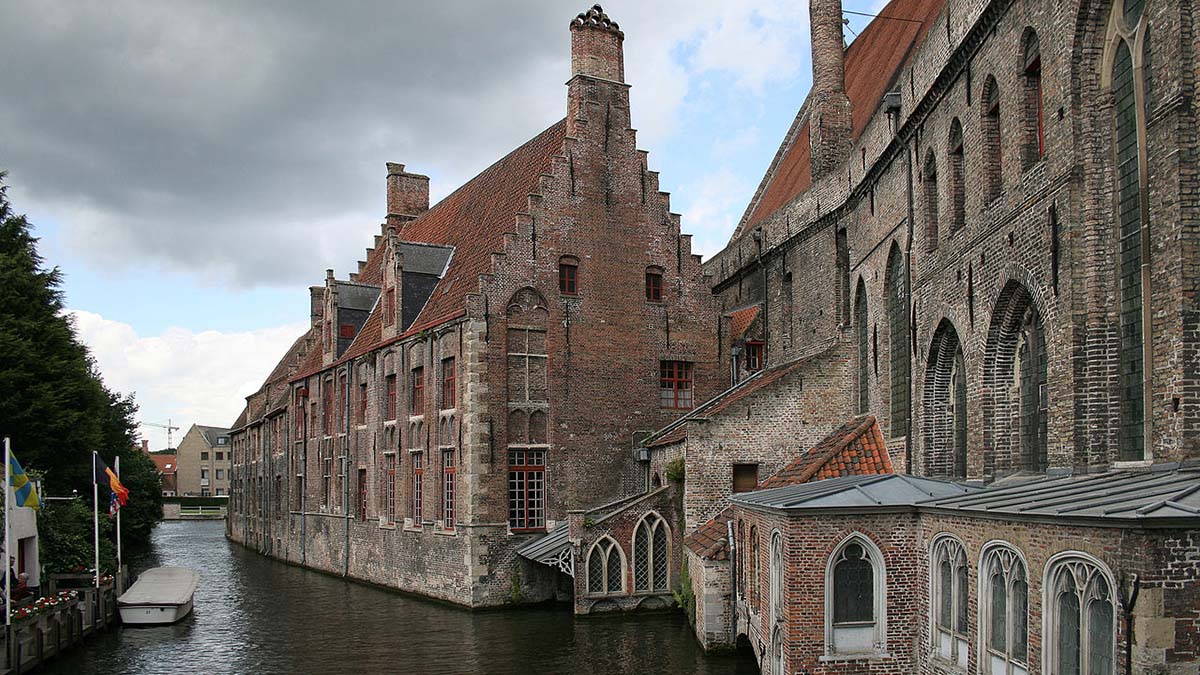 We were highly delighted by our visit to the Hospital of St. John’s. It is a Gothic edifice of ancient structure. The sick lie in a large apartment, which is supported by Norman arches and pillars. The Sisters of Charity attend upon the invalids; and everything appears in that state of order and excessive neatness, so admirably conspicuous in this town.
-Charles A. Stothar, English antiquarian, in a letter to his mother 20th Sept 1890 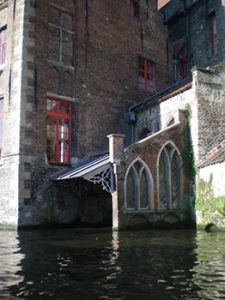 I first saw Sint-Janshospitaal while cruising along the canals of Bruges. The wall running along the Groenerei (or Green Canal) is in classic Flemish style: ivy-covered stones, a roof stepping against the skyline. Tall gothic windows looked over the water. In medieval times this wing doubled as both a chapel and a ward (for since spiritual healing was considered more important than healing of the flesh, a chapel stood inside the open ward). The wash from our barge lapped against the weathered stones and landing stage, where a door opened onto the water.

Dating from the 12th century, Sint-Janshospitaal is Europe’s oldest preserved hospital, and remained in use until 1978. Behind these walls, the buildings now house a museum of medieval medical instruments, hospital artifacts, furniture and even original records. The earliest document relating to the hospital is dated 1188. It deals with the vows taken by the brothers and sisters working here, which differed to those taken by religious orders of the time. The sisters were in charge of the daily organization of the sick and of the kitchen; the brothers took responsibility for the hospital’s administration. In 1236, at the insistence of the Bishop Tournai, the lay brothers and sisters donned religious habits, and took vows of obedience, chastity and poverty. 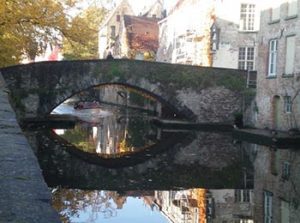 Even the medieval apothecary and herb garden remain. One of the more unique items on display is an old ambulance, little more than a metal box with long wooden handles, in which the patient had to stand as he was carried by porters to the hospital. On the door is written St John’s, Bruges (in English, interestingly, not Flemish). The box looks more like a cage carrying a condemned man to the scaffold than an ambulance.

Hans Memling at Bruges! Have you never seen that dear old hospital of St. Jean on passing the gate of which you enter the fifteenth century?
– Roundabout Papers  Thackeray (1811-1863) 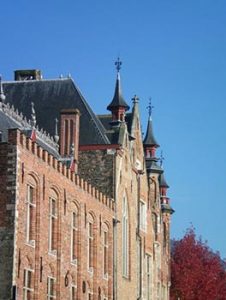 There are also six masterpieces by the famous Vlaamse Primitieven (Flemish Primitive) Hans Memling (1430-1493). The wealth of Brugges attracted leading artists from over Europe, giving rise to the innovative style of the Primitives. Memling lived for a while at the hospital and also died here. It is said, after being wounded at the Battle of Nancy, the Hospitalliers of Sint-Janshospitaal treated his wounds and cured him.

Four of the works by Memling on display were painted specifically for the hospital, including the famous St. Ursula Shrine. Completed in 1480, this work is considered the masterpiece of the artist’s later years. Taking pride of place in the hospital chapel, the shrine is a carved reliquary cased in gold and shaped like a miniature wooden Gothic church. Within are the saint’s relics. The three painted tondoes on each side depict the medieval tale of the beautiful St Ursula and the 11,000 virgins who were massacred by the Huns in Germany while returning from a pilgrimage to Rome. The figures are remarkably delicate, the landscape and costumes full of detail, reflecting the artistic innovations of the time. 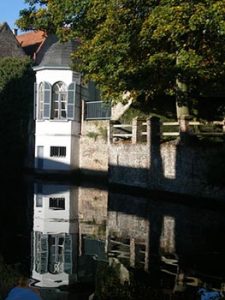 The oldest part of the hospital was built in the Mariastraat, near to the Mariapoort (or Mary’s Gate, one of the city gates in the first city walls). Importantly, the hospital stood just within the city walls, allowing it to provide housing and care not only for sick townsfolk, but also for pilgrims and travelers who often simply sought shelter and food rather than healing. (Opposite the hospital stands The Church of Our Lady, a 13th century chapel originally outside the city limits. Its brick tower is the highest of its kind in Europe. Inside is proudly displayed a Madonna and Child – the only statue by Michelangelo to leave Italy during his lifetime.) 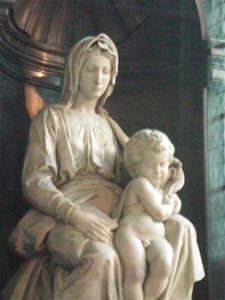 The hospital continued to expand in the Middle Ages. In 1459, when under Bishop Chevrot the brothers and sisters of Sint-Janshospitaal took formal religious vows. This was largely for political reasons; by this time the hospital had become a powerful and rich institution. As a religious order, Sint-Janshospitaal was largely freed from the control of the city magistrate and Philip the Good, Duke of Burgundy. Around 1600 the hospital became an all-female institution.

Sint-Janshospital is one of the most beautiful medieval buildings in Bruges, if not Europe. For over 700 years it served not only as a hospital, but also as a charitable institution, caring for the needy as well as the ill, and giving spiritual guidance to the suffering and the dying. Although some of the original sheds have vanished – including a bakery and a brewery supplying the hospital and the original community ­– the atmosphere of a medieval hospital remain, a place not only utilitarian, but also aesthetically beautiful, designed to cure the body, the heart, the mind and the soul.

Bruges is easily reached by train, whether from Brussels airport or other major cities in Europe. A train from Paris, for example, takes around four hours and cost approx. €26.

For other ideas of what see in Bruges, visit the official website. This also gives suggestions for accommodation. (There are numerous websites for reviewing different types of accommodation.) I’d strongly recommend staying on a canal, with a window overlooking the water.

About the author:
Anne Harrison lives with her husband, two children and numerous pets in regional Australia. She discovered travel at the age of ten, then the world of history and philosophy. Her jobs include wife, mother, doctor, farmer, cheese-maker and local witch doctor, and her ambition is to be 80 and happy. Read more at anneharrison.com.au & hubpages.com/@anneharrison

Photo Credits
First photo of Bruges Sint-Janshospitaal by Ludvig14 / CC BY-SA
All other photos Ⓒ A. Harrison
A side entrance to the hospital
Touring the canals
Sint-Janshospitaal
View from the canal
Michelangelo’s Madonna