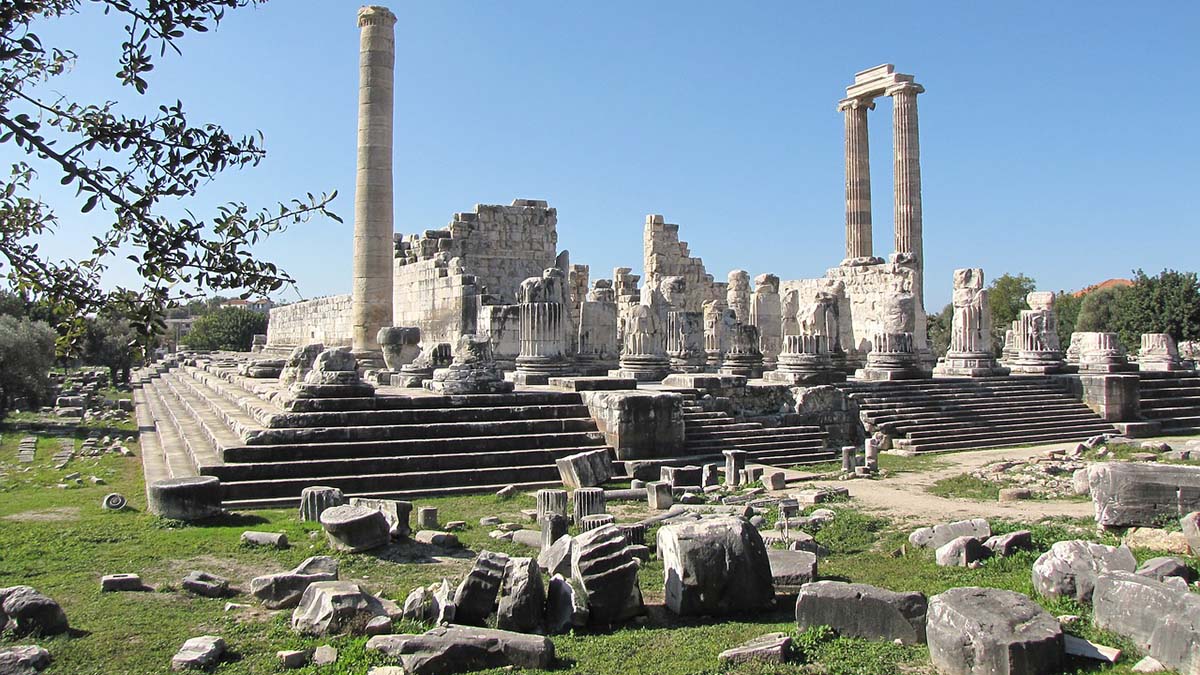 Will the oracle talk to me? Will the Medusa turn me to stone? I laugh at myself, as these thoughts go through my mind while I trudge up the steep road which leads from my holiday place in Didim, about 150 miles south of Izmir on the west coast of Turkey to the complex of the oracle in Didyma about three miles away. 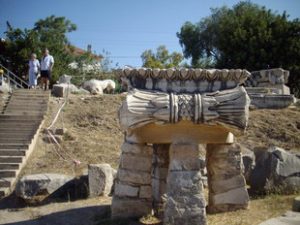 The name Didyma derives from the Greek word Didymaion, meaning twins, referring to the dual dedication of this temple to Apollo and his twin Artemis.

I chose to approach on foot, exactly as the ancient Greeks did when they walked along the Sacred Road from the once mighty and powerful city of Miletos, located on the Aegean Sea. That journey took four days. Mine was much shorter, but I also approached from the opposite direction. Although less known than the Delphi Oracle in Greece, the Didyma Oracle was of equal importance in ancient times. 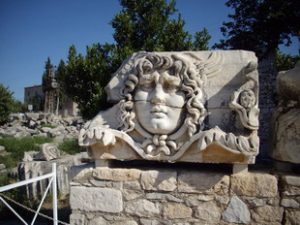 The temple was a place of worship as well as of predictions of the future for the rulers of Miletos. Priests resided there permanently to guard the sacred spring and holy olive tree which are the center pieces of any sanctuary dedicated to the twin Gods.

Although an impressive site and greatly restored and excavated, the Didim Oracle does not have a big approach and parking area. Which, unlike Ephesus and Troy, is a blessing, because there simply is no space for more than one or two tourist coaches at a time. Even so, it gets quite crowded during the summer season and later in the day.

The site opens at 9:00 am. I have my visit well timed, because I want the place all to myself to savor and absorb the atmosphere and let myself be transported into the past uninterrupted by umbrella touting tour guides and jostling visitors. Rounding the last bend in the road, I reach the outer perimeter of the complex. It is fenced in, but most of the outer wall is constructed from huge stone blocks taken from the site itself, which gives the place a feeling of being still alive and sort of “in use.” I pay my modest admission fee of $1 to the one and only guard who is just opening up and still sweeping the entrance. 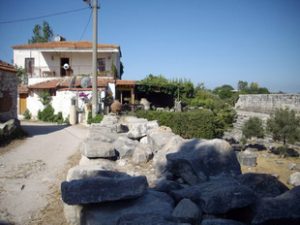 As I descend the first set of stone steps, still moist from morning dew, my only companions are birds singing in the many olive trees; cats stretch their legs, tiny lizards rustle in the leaves. Otherwise, an eerie silence rules, very appropriate for a sacred place. It had the very atmosphere I had wanted.

The Didim Oracle is most famous for three well preserved images of the Medusa and that’s where I head first.

Medusa was one of the Gorgon sisters, the most beautiful but the only one who was mortal. Medusa was extremely proud of her beauty, an attitude which ultimately became her downfall. Randy God Poseidon fell for her and seduced her – of all places, in the sanctuary of Athena. That didn’t go down well with the goddess, but as she was powerless to take on Poseidon, she punished Medusa instead, turning her into a snake-haired monster, who could turn people to stone if they dared to look into her eyes. Until, along came Perseus, who shielded his eyes and managed to cut off the monster’s head. According to mythology, the drops of her blood which fell to the ground, created the snakes of Africa. Devious Perseus then mounted Medusa’s head on his shield and used the powers, which persisted even after her death, to successfully fend off his enemies. 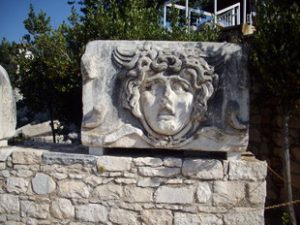 Because I know this story, I turn my eyes to the Medusa monuments with some trepidation. The images are mounted on a knee high stone wall just below the stairs descending from the entrance. No, the stare doesn’t turn me to stone but her eyes reflected such sadness and rage at her fate, that a shiver ran down my spine.

The main temple remains and the now covered sacred spring are to the right. I am glad I had worn sturdy trainers with soles that don’t slip, because the ground is uneven, the steps up to the temple are high and the tunnel leading to Artemis’ temple in the back is slippery.

The temple and oracle has suffered greatly over time. Earthquakes, fires and ransacking have all taken their toll, but mainly German archaeologists have done a great job of excavation and restorations. Many columns of the original temple stand proudly and it isn’t difficult to imagine the procession of ancient Greeks, arriving dusty from their hike along the sacred road, seeking advice and a glimpse of the future from the Gods. 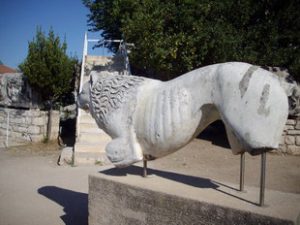 In the times of Alexander the Great, the Didim oracle received a lot of support and money. This comes hardly as a surprise, as he consulted the oracle and, correctly, received a prediction of his many successful conquests. I doubt though, that it also predicted his early death! The priests might prudently have kept that piece of truth to themselves.

The spring down even more stone steps, is now partially covered with a stone slab of enormous proportions and is probably dried up. Even so, and given the total silence, I imagine I hear a murmuring telling me: write about me! Fanciful maybe, but the temple complex has this effect. It is easy to lose track of time, meandering around the entire complex. Many pieces of shattered columns are lying around, but other artifacts and statues have been mounted and placed around the grounds in such a strategic way, that they reveal a new sight and surprise at every turn. 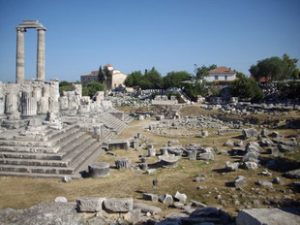 It’s a very gratifying way of arranging an ancient site which allows the visitor a trip of discovery all his own. When visiting historical sites, I hate to be forced by paths, ropes etc. to follow a prescribed route. It’s much more fun to be able to go where I please and that’s exactly what I do here.

Voices drift down, footsteps approach and traffic noises start to intrude into my musings of the past, of Gods, oracles and great kings. It is time to leave. I make my way back, this time around the bottom of the temple with the columns looming even higher above me. At the exit, I buy a small booklet which explains the history as well as the story of the excavations which are still ongoing. Save for another devastating earthquake like the one in 1955, this impressive site will be around for another few hundred years, but I’m glad I came today and leave feeling inspired. 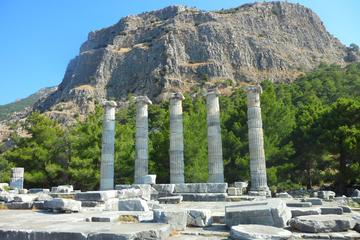 Didim and the Didyma Oracle are best reached from Bodrum to the south or Izmir to the north by car or coach. Coach excursions can be booked in both places. The oracle open at 9:00 am and closes at 5:00 pm. Open every day. For more privacy the best time of year is spring or fall. About five miles toward is Izmir is the village of Akkoy, a typical rural Turkish village with old stone houses, cafes and a fresh fruit and vegetable market on Wednesday. Across the road from the Oracle entrance are several souvenir shops and a carpet shop as well as two restaurants and a cafe where they make the best Turkish coffee flavored with spices – not to be missed. A helpful resource to consult is the Didim Tourism Travel Guide website.