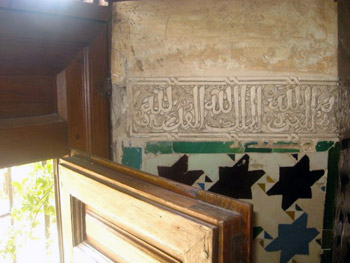 “Dry land, still land of immense nights,” wrote Federico García Lorca in his Poem of the Soleá. “(Wind in the olive grove, wind in the sierra.),” the poem continues, “Old land of oil lamps and sorrow. Land of deep cisterns. Land of death without eyes and of arrows. (Wind along the roadways. Breeze in the poplars.)”

García Lorca’s words are evocative of the place he came from: Andalucía, Spain’s arid southern-most region. Perched on the Mediterranean and looking towards North Africa, Andalucía has never forgotten its Moorish past, nor its legacy of multiculturalism – part Jewish, part Gypsy, part Arab, part Berber and, of course, part Spanish. The Soleá to which García Lorca refers represents this inheritance exactly, as it is one of the most basic forms of Flamenco music, a genre that arose in Andalucía out of Sephardic religious songs, Arab tonalities and Gypsy traditions. It is the music of great emotion and suffering, like the landscape itself, traditionally one of the poorest in Spain, yet also the most culturally rich. It’s no surprise then that García Lorca was inspired by this place, and even more specifically by Granada, home of Flamenco, the last holdout of Moorish Spain, and the city in which he lived a large part of his life. 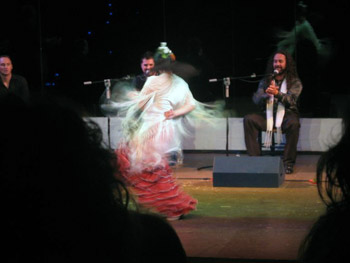 Of course, to say that Granada is the home of Flamenco is a very controversial thing. Seville also claims this title, and competition between the two cities is fierce. But whatever your opinion on the matter, it is undeniable that Flamenco inhabits every nook and cranny of this place, from the street corners where buskers play for spare change, to the smoke-filled caves of Sacromonte (the traditional Gypsy quarter), to the grand stages that draw large tourist crowds.

To visit Federico García Lorca’s Granada, a stop to hear Flamenco is essential. He was obsessed with the genre, and with the Cante Jondo (the singing upon which it is based, translated into English as “the deep song”) in particular. He once said that “it is wondrous and strange how an anonymous popular poet can condense all the highest emotional moments in human life into a three- or four-line stanza”. García Lorca saw Flamenco as the invocation of the human soul, and was preoccupied with the notion of “duende”, which roughly translates as being possessed of that soul. “Everything that has black sounds in it,” he once wrote, “has duende”. “All arts are capable of duende, but where it finds greatest range, naturally, is in music, dance and spoken poetry, for these arts require a living body to interpret them, being forms that are born, die, and open their contours against an exact present.” 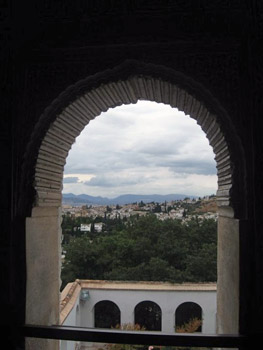 When García Lorca wrote about his Granada, he was keenly aware of living in a forgotten, lost world, not only inhabited by Gypsies, but also by those who came before. When the Moors ruled Spain, a policy of tolerance called La Convivencia (the Coexistence) led to the creation and preservation of a very multicultural society. While Spanish tradition sees this era as a dark period before the glorious Catholic Reconquest, Lorca felt quite the opposite. For him it was a Golden Age of reason and beauty, lost. However, traces of this world still remain in Granada to this day – in the terraced gardens of the Jewish quarter, in the winding narrow streets of the Albayzín (the Muslim quarter), and in the many churches that were once mosques (and mosques that were once churches) sprinkled throughout the city.

The most direct example of this co-oexistence can be found in the church and mirador (plaza and viewpoint) of San Nicolás, located in the Albayzín, a short walk up the hill from the traditionally Christian city centre. Together, they encapsulate Lorca’s Granada perfectly: the church’s mujedar architecture hints at past architects and worshippers, buskers play Flamenco in the plaza, and the view from its stone wall provides a glorious window into the city’s grandiose, dramatic past. There, across the way, lies the hilltop Moorish fortress of the Alhambra, with the snow-capped Sierra Nevada mountains towering above. 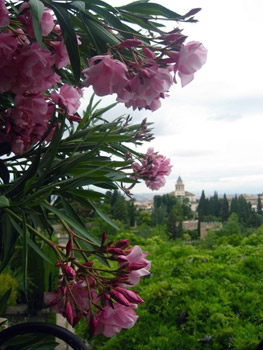 It’s not worth dwelling too much on the Alhambra, as every guide book on Granada mentions it, and it’s an absolute must-see whether you’re following in the footsteps of García Lorca or not. However, it is important to understand that it is one of the greatest examples of medieval Islamic architecture in the world, and that the soul of the city is inherent within its walls: in all that was lost, in all that was built over, and in the mysterious, magical energy that remains, nonetheless. In fact, García Lorca was so moved by the energy of this place that he chose it to be the staging ground for the Concurso de Cante Jondo, a contest of the Deep Song that he helped to organize in 1922. If you visit Granada in June, you can catch a glimpse of this contest’s modern descendant: the International Festival of Music and Dance, which features music concerts, dances and traditional Flamenco events, all on the grounds of the ancient red fortress. 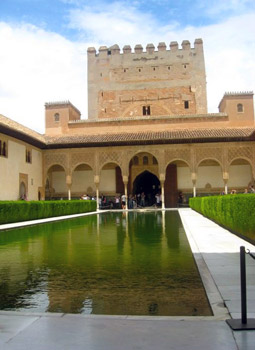 While the Alhambra is the most significant and audacious example of the ancient cultural mix that García Lorca so revered, there are many much smaller, simpler pleasures that tell the same story. Among the lovelier of the city’s customs is the tradition of convent sweets, baked good that are made and sold by cloistered nuns. The recipes are as old as the city itself, influenced by ingredients brought by foreign invaders: almonds, spices and citrus peels, among others. Because the nuns are cloistered, an unusual retail system prevails in order to actually buy these sweets. Upon arrival at a convent (of which there are many sprinkled throughout the city), you are greeted by a buzzer, a price list and a lazy Susan. When you’ve made your order, the lazy Susan spins, revealing tasty treats. An honor system prevails, and you pay the same way, via another spin.

Of course, there are also several more official sites in the city and surrounding areas to which a Lorca pilgrim can visit: the Huerta de San Vicenta (the Lorca family summer home, now a museum), and a statue of the poet in the city center, for example. But if you’re looking for an intoxicating scent of the city and the region and the history that so bewitched Lorca, rather than just the edifices that commemorate him, it is words, more than anything, that will do the job.

Here are some to ponder:

These words are not Lorca’s. They are older. Canto Jondo, perhaps even words he knew and carried with him when he left his to city to live in the snows of New York, and the austere streets of Madrid. Are they the words of a gypsy forever on the move? Of a Moorish poet, exiled from the Andalucía he loved? Of a Jewish converso, a foreigner in his own land? Of an immigrant far from home? Did they ring through Lorca’s head when he was murdered by the Fascists, who were trying, like Queen Isabella in 1492, to yet again to suppress ‘otherness’ in Spain? The words come from a song of loss, and yet also from a song of fighting against forgetting. The duende. The smell of the jasmine, and all it encompasses. That is Lorca’s Granada.

♦ The words I refer to at the end come from the Flamenco song called “La Molinera”.

♦ The words “Gypsy” and “Moor” are outdated, and politically incorrect in many cases. However, I have retained their usage in this piece for literary and historically appropriate reasons. “Moor” encompasses more than “Arab” or “Berber”, and to refer to them as the “Muslim and occasionally North African residents/invaders of Spain” is a bit clunky. I used “Gypsy” because it is the word used in Lorca’s texts, and is still the dominant usage in Spain, including in the Gitano community (the Spanish word for “Gypsy”). However, they are part of the European Romani community, which is the more politically correct and modern term. 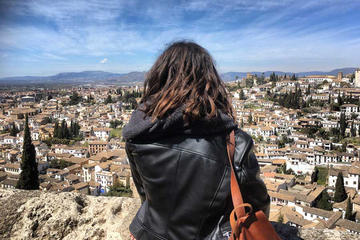 ♦ Sacromonte, the previously mentioned Gypsy quarter, is the most traditional spot to see Flamenco in Granada. In many cases, simply walking into the hills and asking around is the best way to find performances, though there are also several venues that advertise and sell tickets in advance. Avoid the tourist traps which charge 20 euros and up. Auditorio La Chumbera runs shows almost every night at 9pm, with tickets costing only €8.

♦ Buses are cheap, frequent, clean and provide an easy way to get around Andalucía. Both Cordoba and Seville are only two hours away.

♦ Granada is one of the few places in Spain where tapas are served as originally intended: free, provided you buy a drink. It’s a student town, so the options are plenty! Beer and wine tend to cost only about one euro, so you can try many tapas without breaking the bank. 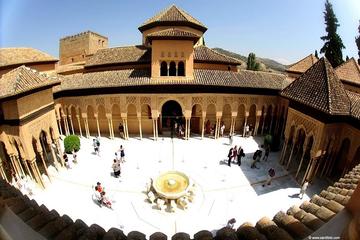