“This is what Sleeping Beauty’s castle must have looked like,” I think, as I survey the scene. A thick carpet of green covers everything in sight. Even the towering walls rise without once breaking the green cover, adding to the feeling that I am in a land long forgotten, left behind in time. 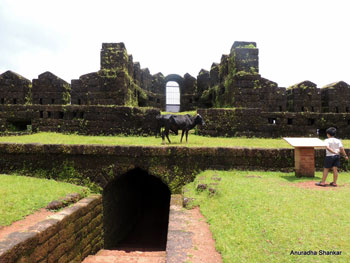 I am not too far from the truth – I am at Mirjan fort, near Gokarna. The fort, built first in the 12th century and extended in the 16th century, has a long and glorious history. It was the seat of Rani Chennabhairadevi, ruling under the aegis of the Vijayanagar Empire. She was better known as the Pepper Queen, or Raina da Pimenta, as she controlled the spice trade in the area. The fort was especially conducive for trade, located as it was, on the banks of the Aghanashini River, a branch of the Sharavati. The fort changed hands many times, from the Rani to the Sultans of Bijapur, the Marathas, and eventually the British. The unification of the area under the British, as well as the setting up of newer and modern ports along the coast, ultimately rendered the fort ineffectual, and it was abandoned, leaving nature to reclaim it for her own.

It is only recently that the fort has come into focus again, and efforts are on to restore it, at least to show us a glimpse of its past glory. As of now, the archaeological department has only managed to clear the front part of the fort, and part of its ramparts. Much is left to be done, as is apparent from the rear portions of the fort, which is what remind us of Sleeping Beauty’s castle, forgotten for a hundred years. 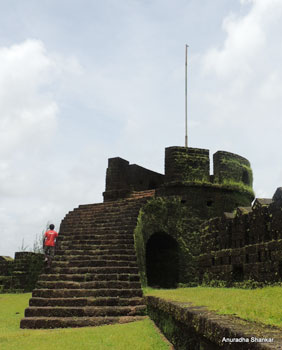 From the outside, it is still apparent why the fort was such a stronghold. Spread over an area of 10 acres, huge double walls protect the interiors, and the whole fort is surrounded by a moat, which, in its heyday, was connected to the river, fed by canals which continue to irrigate the fertile fields which surround the area.

The fort has four entrances, of which only the main one has been cleared so far. Among the others, one was for sole use of the royal family – a private entrance, so to speak; one was a direct approach from the river, and the last one was for the entry of goods – a service entrance. These entrances are barely visible, covered by ruins and foliage.

The inside of the fort is equally impressive, especially when it comes to the planning that went into it. Recent excavations have revealed, among others, an audience hall, part of what must have been the kitchen, and also mechanisms of water transport and storage. There are deep wells inside the fort, providing fresh water, and connecting them, water channels. There are water troughs for the horses, tanks storing water for the kitchen, and even provision for storage and disposal of waste water. Of course, most of these are in ruins, due to the neglect of centuries, and we can just get a glimpse into what made the fort function so well in its prime.

Under the branches of a tree are some idols. These are the only evidence of a temple inside the fort. The biggest idol found here is that of the goddess Mahishasura-Mardini. In all probability, the temple was dedicated to her. Facing her is a stone image of a lion, her vehicle. Around them, lie various stone sculptures, mostly of snakes. The snake is venerated in this part of the country. It is no surprise to see them here. More interesting are the hero stones, and stones which seem to tell stories, lying broken by the side. Unfortunately, there is nothing to tell us what they are. 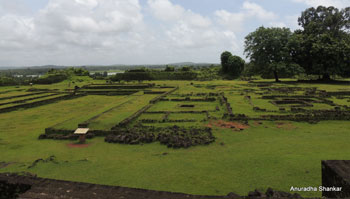 What we can see of the fort is simply the tip of the iceberg. Literally, it’s only the top portion of the fort which is accessible today. More interesting are the underground chambers and passages, built for protection and to facilitate escape, but which today lie in ruins, and are unapproachable. The ASI is, to give them credit, trying to restore the fort to its former glory. The fort was built using the locally available laterite stones, and we saw ASI personnel at work, trying to restore the turrets with remnants from the ruins or similar laterite stones, still plentiful in the area.

And thus, work goes on, trying to reclaim our heritage from the passage of time. Meanwhile, nature continues her work, scattering seeds into new crevices, growing moss over newly laid bricks, the monsoons aiding her in her work. And the cows continue to graze, oblivious to their role in this clash between humanity and nature, unaware of the history beneath their hooves. And as we turn back, and bid goodbye to Mirjan fort, there is a tiny part of me, which wishes the fort stayed as it was, a fairy tale castle, hidden from vandals by nature. 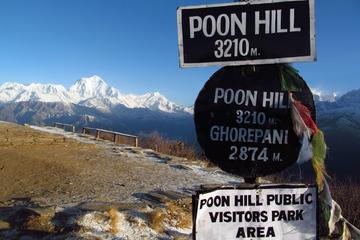 LOCATION: Mirjan Fort is located at Kumta, about 10 kilometers from Gokarna.

HOW TO REACH:
♦ By Road: Kumta is on the highway, and is well connected to both, Mangalore as well as Karwar and Goa by bus. Buses from Mumbai also halt at Kumta. Autos are available from Kumta. It is easier to stay in or around Gokarna and make a visit to the fort.
♦ By Train: Certain trains on the Mumbai – Mangalore – Trivandrum route stop at Kumta. The other nearest railway station would be Gokarna Road. Regular passenger trains run on the route, and make a stop at Kumta.
♦ By Air: Mangalore (200 Km) or Goa (180 Km) would be the nearest airports.

WHERE TO STAY: There are plenty of hotels in the area, suiting every possible budget, from beach shacks to homestays to five star resorts. However, most of them would be situated around Gokarna, Udupi, Mangalore, Karwar and Goa. 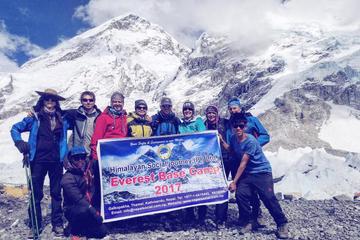 About the author:
Homemaker and Travel Blogger Anuradha Shankar lives in Mumbai, India. She loves exploring known and less known places in India, and is as fascinated by their stories and legends as her 10 year old son, whom she usually drags along on her travels. Her blog, A Wandering Mind, is her attempt to showcase her country to the world.

All photos are by Anuradha Shankar.