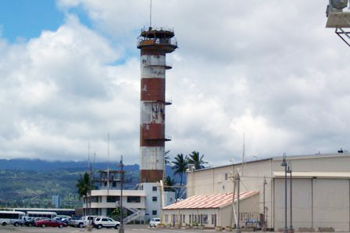 The sounds of the guns barking broke up the calm of the quiet Sunday morning; the Attack on Pearl Harbor had begun. It was to be the last day of peace for many years. The bullets were screaming and flying everywhere, amid the loud roar of the Japanese airplanes flying above. My body shuddered, my mind deep in thought. Then I realized I was walking down the runway. Now suddenly awake from my daydream I found that I was standing on Ford Island staring at the bullet holes in the hangar walls, the broken glass windows and the pockmarked concrete runway. History was all around me from the strafing Japanese airplanes.

It has been a long time over 70 years since that day December 7, 1941, a date which lives in infamy. However today it is a nice calm and warm summer day. All around the hangers the scars of war are present. It is amazing that there are still bullet holes left over from all those years ago on that fateful day. The next day December 8, 1941 President Franklin Roosevelt requests, and receives, a declaration of war against Japan. All around the island of Oahu are reminders of the attack. 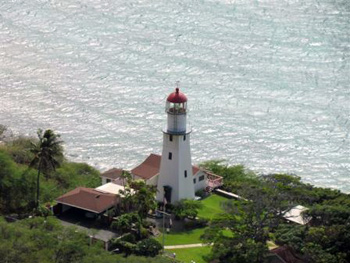 Fort Shafter is the oldest U.S. military installation on the island. Visit Quarters 5 residence of General Walter C. Short who was head of security on Oahu in 1941. Palm Circle which was strafed on December 7, 1941 houses the Pineapple Pentagon, Headquarters of the U.S. Army Pacific Command.

Schofield Army Barracks was the site of the movie, “From Here to Eternity,” which was filmed there. It is the largest Army Base outside of the Continental United States. The Japanese attack aircraft flew over the base strafing everything in sight as they headed to bomb Wheeler Field and Pearl Harbor.

Wheeler Army Airfield was the location of Oahu’s fighter command post in 1941 where brave Army Air Corps pilots fought against the Japanese in the skies of Oahu. The movies “Tora, Tora, Tora,” and Disney’s, “Pearl Harbor” were filmed there.

Haleiwa Field on December 7, Lt. George S. Welch and 2nd Lt. Kenneth M. Taylor were at Wheeler field when the attack started and not waiting for instructions called Haleiwa field to have their fighters fueled, armed and warmed up. They raced to Haleiwa field by car and jumped into their cockpits and took off. They shot down 6 Japanese airplanes and were both awarded the Distinguished Service Cross for their bravery and valor during the attack. 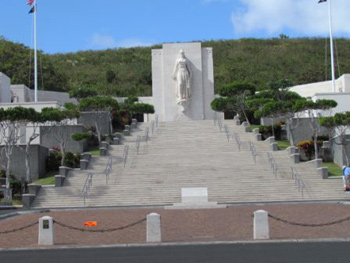 Pearl Harbor Visitor Center/ Museum/ Battleship Row, the Arizona Memorial is probably the most visited site on Honolulu and begins at the visitor’s center with an outstanding film documenting the attack on Pearl Harbor, with actual footage of that day. There are informative displays to learn more about the events that took place that changed the course of American History. There are snack areas and food vendors where you can relax and grab a bite to eat. We met some of the survivors and were able to thank them for their service.

Board a US Navy launch for a short ride to the USS Arizona Memorial, which is part of the WWII Valor in the Pacific National Monument. The USS Arizona Memorial is built right above the sunken remains of the ship. You can read the names of all 1,177 sailors and marines who were killed on December 7, 1941.

Battleship Missouri Memorial located on Battleship Row located a mere ship’s length from the USS Arizona Memorial, completes a historical visitor experience that begins with the “day of infamy” that saw the sinking of USS Arizona in Pearl Harbor and ends with Imperial Japan’s unconditional surrender aboard USS Missouri in Tokyo Bay. Following an astounding career that spans five decades and three wars, from World War II to the Korean War to the Operation Desert Storm, the “Mighty Mo” was decommissioned and donated to the USS Missouri Memorial Association, Inc. 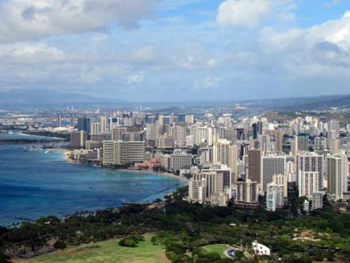 The Punchbowl National Memorial Cemetery of the Pacific is known to the Hawaiians as Puowaina or “Hill of Sacrifice.” This is the final resting place of over 35,000 Americans who proudly served their country. Experience the serenity of the Cemetery and discover the cemetery’s meticulously landscaped acres. There are also the Courts of the Missing, the chapel and the finely detailed mosaic maps of the Pacific theaters of action in World War II.

My wife and I visited the Diamond Head Crater which features a 360 degree view of Waikiki and the turquoise blue Pacific. After walking up the side of the crater, 271 plus steps, up staircases, through tunnels and bunkers we reached the top at about 760 feet above sea level. We stood over the Diamond Head Lighthouse beneath us, just offshore of the blue Pacific Ocean. It is now a United States Coast Guard facility that was listed on the National Register of Historic Places in 1980 and featured on a United States postage stamp in June 2007. 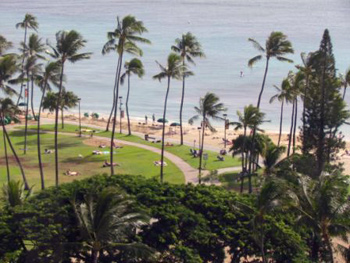 Waikiki Beach meaning (pouting fresh water) in Hawaiian in Downtown Honolulu is probably one of the most famous beaches in the world with it’s the white sand beach. The area of Waikiki is home to public places including Kapiolani Park, Fort De Russy Military Reservation, Kahanamoku Lagoon, Kuhio Beach Park, and Ala Wai Harbor.

Today, the area is filled with large resort hotels, such as the Hilton Hawaiian Village, the Halekulani hotel, the Hyatt Regency Waikiki, the Hyatt Place Waikiki, and the Sheraton Waikiki. However, earlier photographs show an almost deserted area. The Moana Surfrider Hotel and the Royal Hawaiian Hotel are some of the historic hotels dating back to the early 20th century. One of the most well known is the Royal Hawaiian or Pink Palace (recognized for its pink façade) opened in 1927. It has a rich history and connection to Hawaiian culture. Enjoy a Lava Flow at the open bar just off of beach and gaze at the majestic Diamond Head Crater.

The beach also hosts many events a year, including surf competitions, outdoor performances, hula dancing, and outrigger canoe races. The beach is the place for a lot of action as there is always something happening.

Iolani Palace is the only royal palace in the United States. It was the official residence of Hawaii’s monarchy and is a marvel of opulence, innovation and political intrigue. Meticulously restored to its former grandeur, this National Historic Landmark in downtown Honolulu tells of a time when their Majesties, King Kalakaua, who built the palace in 1882, and his sister and successor, Queen Liliuokalani, walked its celebrated halls.

Walk through the downtown area and visit the multitude of stores available to fulfill the most finicky shopper’s desires. There are also many fine restaurants.

Hop a bus or drive out to the North Shore about an hour north of Waikiki and watch the surfers. The North Shore is considered to be the surfing Mecca of the world and Haleiwa town is the gateway. It is a laid back surf town with surf shops boutiques, restaurant and art galleries. 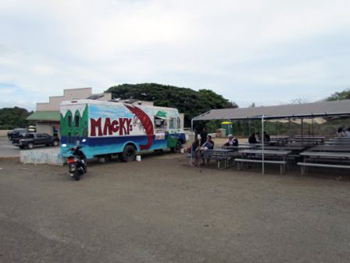 Between the months of November and February are the best times to watch the more experienced surfer’s battle the big waves that can reach up to thirty feet. However from May to September the waves are smaller and more tranquil for beginning surfers and excellent for swimming and sunbathing. There are fifty one beaches on the North Shore some of the more famous include Waimea Bay, Sunset, and Ehukai (home of the Banzai Pipeline) and have thick white sands that stretch for more than eleven miles.

Complete the day by trying one of the local specialties. Haleiwa is also known for its shrimp trucks which are a group of individually owned and operated trucks that sell local, fresh shrimp. They each have there own unique style and flavor and individual specialties however basic garlic and butter and hot and spicy are the two most well known. Usually they are served with rice and macaroni salad. At Mackey’s we had the garlic and butter which included rice and a garden salad with pineapple. 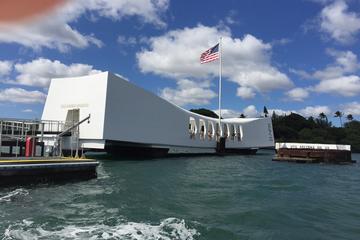 ♦ There are a variety of direct and indirect flights of airlines and prices to Honolulu, Hawaii.
♦ There are also a variety of hotels and condos to choose from.
♦ One of my favorite restaurants in Honolulu is Jimmy Buffet’s Beachcomber, 2300 Kalakaua Avenue, Honolulu, HI 96815. 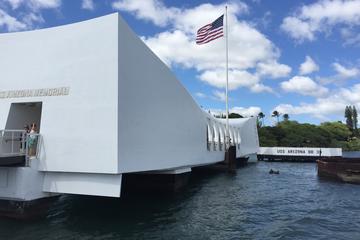 About the author:
Larry Zaletel is a freelance travel writer and a recurring visitor to Western and Eastern Europe, the Islands of the Caribbean, Mexico, South America, and Hawaii. He loves to travel and has also visited parts of Canada and many States of the United States. He writes about the places he has visited, the people he meets, and their customs. Larry is a regular contributor to Travel Thru History