The history of the independence of India is synonymous with the life and times of Mahatma Gandhi, the “Father of the Nation.” The preeminent freedom fighter, social activist and politician was an inspiration for international icons such as Martin Luther King Jr. and Nelson Mandela due to his singular devotion to the doctrine of non-violence and truth. His is the face that adorns every Indian currency note. Mohandas Karamchand Gandhi was born in Porbandar in the state of Gujarat in western India. He crisscrossed the sub-continent in his quest to liberate India from British rule during the Indian freedom struggle.

It was in New Delhi, the capital of India where he lost his life to a fanatic’s bullet. 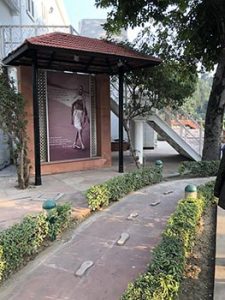 I was looking at the Mahatma’s footprints reconstructed on the route he took on the fateful day of January 30, 1948. We were at Gandhi Smriti, literally Gandhi Memorial/Remembrance, at Birla House in New Delhi, India, the place where he spent the last four and half months of his life, 144 days to be exact. I walked alongside the winding pathway through the tranquil, serene grounds, following the concrete footsteps and reached the Martyr’s Column that commemorates the exact spot of his death.

Birla House was built in the colonial era by Ghanshyam Das Birla, the patriarch of one of the most well known industrialist and philanthropic family of India. G.D. Birla became an early supporter and follower of Gandhi and the freedom movement and his residence became a center for those fighting for freedom.

Mahatma Gandhi arrived here from Calcutta and lived in this house from 9th September 1947 to 30th January 1948. On that day at 5:17 pm, he was shot while going for evening prayers that he held every day in the compound garden in front of a mass congregation. In the 1970s, this house became a memorial committed to keeping alive the essence of the most notable man of India. 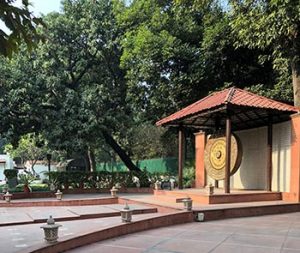 When we entered the expansive premises of Birla House, the first thing I saw was a gigantic peace gong, a fitting tribute to the occupant of this house. All around in the midst of flowers and greeneries in the lush, landscaped gardens were rocks and stones engraved with quotes of the Mahatma. “I would not like to live in a world where there is no peace.” I translated the Hindi quote in my mind as I stood near the World Peace Gong, inaugurated here in 2006 on the centenary of Gandhi’s first Satyagraha, meaning loyalty to truth and his adopted method of passive resistance to non-violence. The enormous gong displays the flags of all the countries in the United Nations and the symbols of all world religions.

“My life is my message,” the familiar quote was inscribed at the bottom of the large statue of Gandhi near the entrance to the museum. We walked by the little plaque that highlighted each event of his life every time he stayed in this building.

Inside the museum, our tour guide walked us through floors and rooms full of sculptures, photographs, paintings, movies, recordings and memorabilia of all kinds related to the epic life of Mahatma Gandhi. We walked through halls filled with his photographs and placards and his countless words of wisdom, chronicling the transformation of his life from being a lawyer in Britain to his formative years as a political activist in South Africa to his ultimate legendary status.

I loved the colorful charkha displays, embodying the traditional spinning wheel that in Gandhi’s hands became a potent emblem of his political beliefs. What really caught my attention were the historical dioramas depicting significant scenes from Gandhi’s life intertwined with crucial events of the Indian independence movement.

In one, there was a pile of colorful cloth, surrounded by a mob of men, women and children carrying posters in Hindi, Gujarati and English. “Boycott foreign cloth”, it said, showing the bonfire of foreign cloth campaign from 1922. In another diorama, he is at Buckingham Palace in 1931 in his customary loincloth attire, meeting King George V while in yet another, he is in Shantiniketan meeting with Nobel Laureate poet Rabindranath Tagore who is known to have given him the title of Mahatma (a great soul).

The model of Sabarmati Ashram gave us a good insight into what the real one would be like. Located on the banks of the Sabarmati River in the state of Gujarat, this is the place where Gandhi conducted his experiments on farming, animal husbandry, khadi and other such issues. It was his home from 1917 to 1930 and was a primary venue of the Indian freedom movement.

Certainly, the most poignant moment in the visit is when one enters the chamber where Mahatma Gandhi sat last before walking out to his death. This is a sparse area and we walked in to see a preserved room that highlighted his simple living style while staying in a lavish mansion. A corner of the large room had his mattress, pillows, a desk, and his spinning wheel. I noticed the little wooden sculpture of the three wise monkeys and on the wall a display of his meager personal possessions including his recognizable round glasses and his pocket watch that had stopped and was showing the time of his death.

Next to a floor length window was the sign that noted “the path that Gandhi walked on his last day to the prayer grounds.” We walked out the door tracking the cement footsteps and out into the garden to reach the final prayer spot on an elevated lawn. Under a canopied pavilion, is the spot where he was shot three times in the chest at point blank range. The memorial notes his last words “Hey Ram’’ and the date and time that he was shot. The events immediately before and thereafter are thoroughly recorded by the photos of Henri Cartier-Bresson, at the time a little known photojournalist who happened to be there by chance and who photographed Gandhi a couple of hours before his assassination.

Seeing the famous photos here reminded me of our visit to Raj Ghat, on an earlier separate trip. This is where the cremation of Mahatma Gandhi was held on 31 January 1948. Cartier-Bresson’s photos at Gandhi Smriti show crowds of people gathered on the streets of Delhi, all waiting to pay their last respects.

The memorial is reached after a long walk through a scenic park. On the day that we went, the crowd was thin, no doubt due to the fiercely high midday temperatures. The large, square, black marble platform is built at the exact place where he was cremated. An eternal flame symbolizing his undying spirit burns at its one end and the words “Hey Ram” (Oh God), believed to be his last words are inscribed in Hindi on the bottom of the facing end. The cenotaph area is surrounded by greenery and the entire space is enclosed within a high wall thus keeping it hidden from view while we walked to it. Opposite Raj Ghat is the museum dedicated to highlighting the life and philosophies of Mahatma Gandhi. The collections include original books, journals, personal items, audiovisual memorabilia and other such items belonging to Gandhi and his wife Kasturba and other notables connected to the Indian freedom struggle. A little drawback is that the museum does not permit photography of the exhibits. 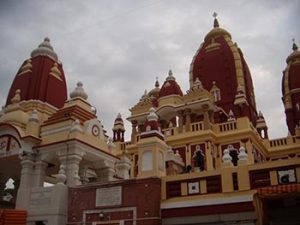 Located about 10 miles from Birla House, this temple dedicated to Goddess Laxmi and Lord Vishnu, also known as Birla Mandir was inaugurated in the 1930s by Mahatma Gandhi on the condition that all castes would be allowed to enter the temple premises.

One of the oldest Hindu temples in New Delhi, this red sandstone and white marble temple reminds us of the Mughal colors but it is built in the style of traditional Hindu temples with wall frescoes depicting scenes from Hindu mythology.

An impressive addition to Gandhi related memorabilia, this is a massive sculpture of a set of black stone statues commemorating the iconic Salt March. Known as Gyarah Murti (eleven statues showing Gandhi in the lead trailed by ten marchers), it was sculpted by the noted Indian sculptor Devi Prasad Roy Chowdhury.

On March 12, 1930, Mahatma Gandhi and seventy-nine of his followers marched from Sabarmati to Dandi on the coast of the Arabian Sea, to extract and make salt from the sea in order to defy the salt tax imposed by the British. Along the way, when he stopped at villages, thousands more joined the march. The Salt March led to mass civil disobedience all across India.

The only way really to see this statue is while driving along the road as there is no place to stop by and savor the scene. Nevertheless, it provides a suitable end to a day spent visiting the various memorials to Mahatma Gandhi in the city.

Gandhi Smriti at Birla House is located at 5 Tees January Marg near Claridges Hotel. Tees January meaning 30th January in the Hindi language, the date he was assassinated. It is open 10am-5pm Tuesday – Sunday, closed on Monday. There is no entrance fee. The closest metro stop is Rajeev Chowk. It is easily accessible by all modes of transportation.

Raj Ghat is open from dawn to dusk all days of the week. It is located at Mahatma Gandhi Marg (Ring Road). The closest metro station is Pragati Maidan station. There is no entrance fee.

Laxmi Narayan Temple or Birla Temple is located at Mandir Marg and has no entrance fee. It is open all days from 4:30am – 1:30pm and again from 2:30pm – 9pm. The closest metro station is R. K. Ashram Marg.

Gyarah Murti or Dandi March Statue is located at Mother Teresa Crescent and is on easy view if one is traveling on this road.

Buses, hired cars, taxis, auto rickshaws and cycle rickshaws are available outside all metro stations and hotels and can be used to reach all the above destinations.

About the author:
Susmita Sengupta is a freelance writer who loves to travel. She and her family have traveled to various parts of the USA, Canada, Europe, the Caribbean, Middle East, Southeast Asia and India.

All photos by Susmita Sengupta