Benjamin Disraeli visited Jerusalem in 1831, at the age of twenty six, hoping to find inspiration for his novel Alroy. The city was to prove the highlight of his Grand Tour, indeed he could have written “half a dozen sheets on this week, the most delightful of all our travels.” [1] The weather was glorious and Disraeli dined “every day on the roof of [his] house by moonlight” [2] after playing at the intrepid nineteenth century tourist and respectable British pilgrim. He was wined and dined by the social powers and he visited the Tombs of the Kings and the Holy Sepulchre. He was, in essence, representative of the supposed two thousand traveller-authors who visited Palestine between 1800 and 1878 [3] and whose impressions were refracted through their biblical and historical education. The majority paid little or no attention to the reality of the Holy Land instead taking their cues from literary antecedents, especially, of course, the Bible. In 1837 for example Lord Lindsay Crawford wrote home to his mother that he “had tried every spot pointed out as the scene of Scriptural events by the words of the Bible, the only safe guide-book in this land of ignorance and superstition.” [4] In instances such as this we can see Orientalism [5] in practice and observe the effect that this innate, largely xenophobic, attitude had on the British view of the Holy Land. For these writers “the real Palestine was the one described in the books rather than the one they saw before them.” [6]

While some, such as Said and Nassar, see Disraeli’s literary output as a product of the Orientalist discourse we can see a certain realisation, especially evident in Tancred, of the cosmopolitan and universally valid nature of Jerusalem and its inhabitants. 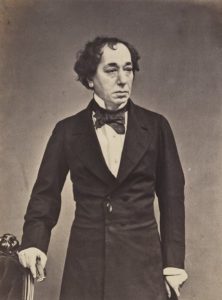 This novel, the third in Disraeli’s Young England Trilogy, tells the story of a young aristocrat who, having lost faith in “politics as the means for exerting beneficial change” [7] goes “in search of the wisdom of the three great Asian religions: Christianity, Judaism and Islam.” [8] Of course this to be found in Jerusalem and so Tancred seeks to emulate his crusader forbears by making pilgrimage to the Holy Land, not in conquest but in self-realisation. He does not seek to free Palestine but his own spirit,
“I, too, would kneel at that tomb; I, too, surrounded by the holy hills and sacred groves of Jerusalem, would relieve my spirit from the bale that bows it down; would lift up my voice to heaven, and ask, what is duty, and what is faith? [9]

Tancred, in his realisation that the political world has failed in its cosmopolitan duty of promoting beneficence, becomes drawn to the concept of cross cultural philosophical validity. Away from the machinations of the state, where men like Palmerston “will never rest” until they “get Jerusalem” [10] because, after all, “the English must have markets” [11] Tancred begins to comprehend homogeneity between the East and West, and, indeed, the appeal of such hybridity. This is best demonstrated through Tancred’s relationship with the various indigenous inhabitants of Jerusalem and, especially, the Jewish Eva.

Tancred first meets this woman whose beauty is almost primeval, “such as it existed in Eden” [12]. Her very name is reminiscent of Eve; she is ‘woman’ before she is Jew and she bears the best features of all the nations of Earth.
“[Her] complexion was neither fair nor dark, yet it possessed the brilliancy of the north without its dryness, and the softness peculiar to the children of the sun without its moisture.” [13] 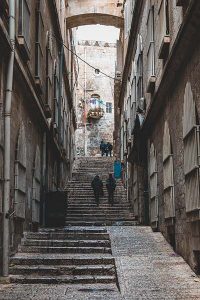 Her cosmopolitan visage is reflected in her conversation when Tancred engages her in a discussion of religion and she states that perhaps she ought to worship Jesus as he is of her race. Indeed Eva has read the Bible and, for Tancred, her mentality is a hybrid mix of Judaism and Anglicanism, she is “already half a Christian.” [14] Tancred though has not yet received his cosmopolitan epiphany and his advice of turning to the church for guidance is met with… un-enthusiasm.

While there is a heady mix of Christian cultures in Jerusalem: Latin, Abyssinian, Armenian, Coptic, Maronite, Greek, this plurality fails as a guide to knowledge. Even divine inspiration, which Tancred is certain he will receive in Jerusalem of all places, is a last resort, to be taken only after “human wit” [15] is exhausted. Eva essentially personifies the spirit of intellectual cosmopolitanism, in both her appearance and outlook. Her morality is not to discovered though scriptural and dogmatic alchemy but rather through rationalistic inquiry.

It is not just in the Holy Land’s inhabitants that Tancred, and Disraeli, find a cosmopolitan identity. The very nature of the place as the cradle of civilisation stirs in the pilgrim the sense that he is treading on ground belonging to humanity. For Tancred, all the natural beauty and wonder of Jerusalem and Palestine pale into insignificance when set alongside the sites of human endeavour and identity,
“[his] eye seized on Sion and Calvary; the gates of Bethlehem and Damascus; the hill of Titus; the Mosque of Mahomet and the tomb of Christ” [16] In seeing this hybrid mix of man’s history he realises that “the view of Jerusalem is the history of the world; it is more, it is the history of Earth and Heaven.” [17] 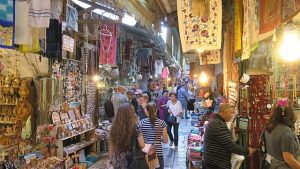 Tancred’s impression of the universality of the Holy Land is further enhanced during his excursion to Sinai where he observes “two ruins, a Christian church and a Mahometan mosque. In this, the sublimest scene of Arabian glory, Israel and Ishmael alike raised their altars to the great God of Abraham” [18] This coexistence, this acceptance of the holy land as a shared space, awakens in Tancred the understanding that “it is Arabia alone that can regenerate the world.” [19] For Proudman, Disraeli here, is really the antithesis of Said’s Orientalist; “whatever else he was trying to do, Disraeli was not portraying an inferior East,” [20] rather, his multicultural view of religion and Jerusalem reflect the cosmopolitan spirit of the region in spite of politics and statecraft.

In 2008, when discussing Jerusalem being voted Arab capital of culture, Huda Imam described the city as the “world capital of humanity and spirituality.” [21] As she took around fifty children on a tour of the city one Muslim child asked whether he could pray at the church of the Holy Sepulchre,
“You can pray anywhere you want… Since my childhood, I have always loved to light a candle, recite the fatiha, and make a wish when I visit this church. As a Jerusalemite, I consider it part of my culture” she replied. [22]

This is Jerusalem beneath the politics and at its cosmopolitan best.

Benjamin Disraeli (1804-1881) visited Jerusalem in 1831 as part of a ‘Grand Tour’.
♦Born a Jew he was baptised into the Anglican Church and served as the Conservative Prime Minister of England twice between 1868 and 1880.
♦He was a prolific writer before entering politics and wrote several novels, the best known being Vivian Grey (1826), Alroy (1833) and the Young England Trilogy Sybil, Coningsby and Tancred written in the 1840’s.
♦For more information on Disraeli’s adventures in Europe and the Middle East see Robert Blake’s Disraeli’s Grand Tour: Benjamin Disraeli and the Holy Land 1830-31.
♦The best account of Jerusalem’s History is definitely S.S Montefiore’s recent book Jerusalem: The Biography.

About the author:
Talisker Donahue studied History & Classical civilisation at Roehampton University (London) winning the Humanities Department prize for outstanding academic achievement in the process. Before going to University he made a two month solo trip across Europe and Asia, sleeping in trains, tents and hostels. Tal has also made several other low-budget, big-adventure trips into Europe including Italy, Germany and France. He has ambitions to compile a guide to ‘shoestring travel’ for students in addition to freelance history writing.