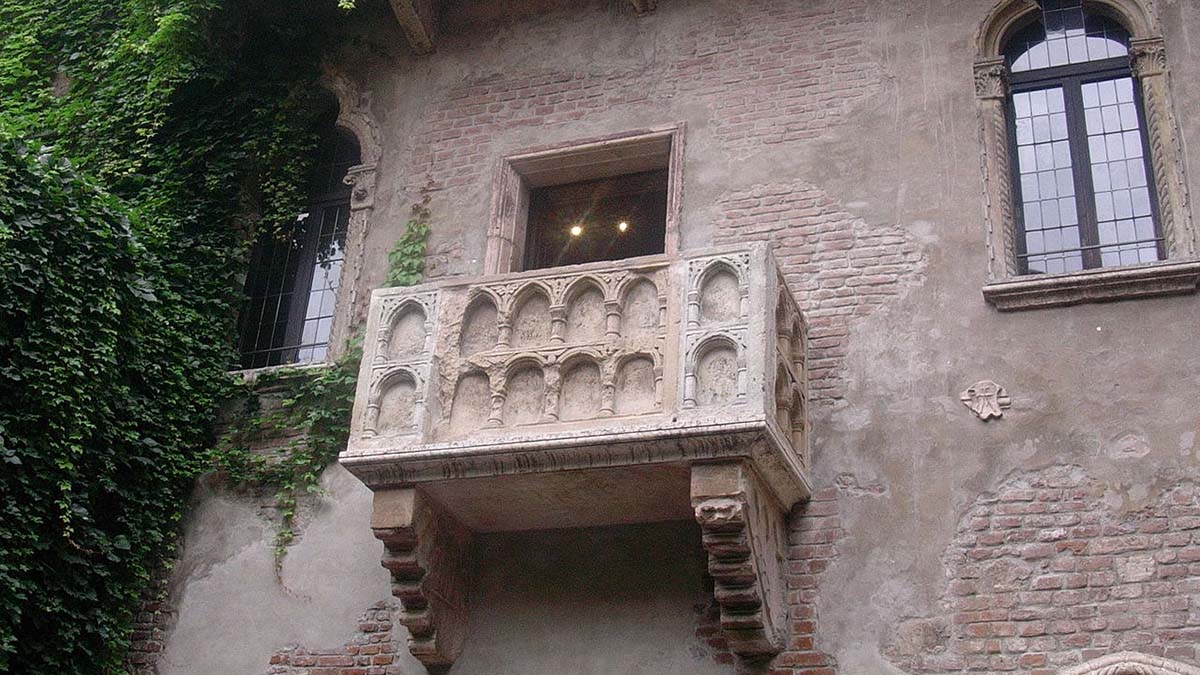 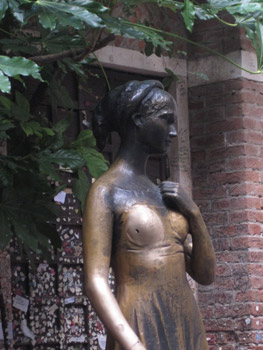 “Fair Verona” is brimming with historical and artistic treasures, such as the magnificent Arena, whose sands where once stained with the blood of gladiators, but now hosts one of the most spectacular opera festivals in the world.

However, it is the home of a fictional character which attracts the largest number of visitors. Each year, thousands of romantics head for “Casa di Giulietta”, (“Juliet’s House”), a 13th century building which has been claimed as the probable home of the young girl who inspired the greatest love story of all time. The Cappello family, whose crest can be seen on the wall of the house, are thought to have been the modal for Shakespeare’s Capulets. In 1905 the city of Verona bought the house from the Cappello family and visitors began to arrive. 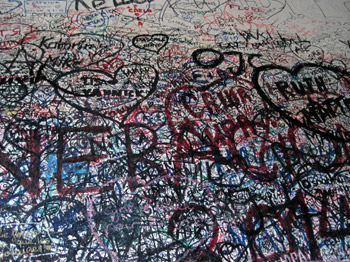 The tunnel-like entrance to the courtyard is covered in graffiti and lovers traditionally leave their names, snippets of poetry or messages of love on panels that cover the walls, if they can find space, creating a fascinating collage dedicated to love.

The pretty little courtyard is usually crammed with tourists, most of whom are waiting to have their photo taken with the bronze statue of Juliet. Legend states that you will have luck in love if you touch Juliet’s right breast, and the bronze is noticeably worn from the caresses of hopefuls.

The most famous balcony in the world was actually created from pieces of a medieval sarcophagus and added to the original building in 1936. A plaque under the window is inscribed with Shakespeare’s immortal lines,

But soft, what light through yonder window breaks?
It is the East and Juliet is the sun…..
……It is my lady; O, it is my love!” 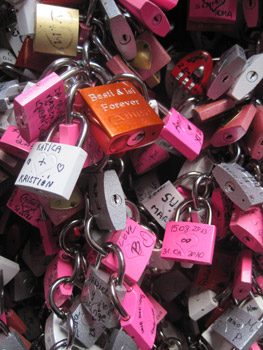 Behind the statue, the railings are covered in padlocks forming a chain created by lovers from all around the world. Couples write their names on padlocks, which can be bought from the handy gift shop, or bring their own, to write their names on and bind their love forever. This gimmick, which the cynical criticize as being solely a source of commercial profit, nevertheless creates a unique piece of living art, which is constantly changing. According to popular belief couples who leave messages on Juliet’s Wall, in any shape or form, will find eternal love.

The idea of the padlocks was conjured up to discourage romantics from leaving messages and initials on pieces of chewing gum stuck to the walls surrounding the statue. You can still see some of the remnants, plus post-it notes with messages asking for Juliet’s intervention or help in finding a suitable match. However, those who attempt to leave such messages will be awarded a hefty fine if caught.

For a fee, it is possible to visit Juliet’s house and be a would-be Juliet on the famous balcony for a fleeting moment. Inside you can see some Renaissance frescos and the bed used in Zeffirelli’s 1968 film “Romeo and Juliet”.

Every year, Juliet receives over 5,000 letters, many simply addressed to “Juliet’s House, Verona”. Most of these letters are sent by American teenagers. Every missive is read and replied to by volunteers from “Juliet’s Club”, which is financed by the City of Verona.

As for Romeo, number 4, Via Arche Scaligere, just a few streets away, has been designated as his house. The building is private but a plaque on the wall indicates Romeo’s residence. The monastery of San Francesco al Corso is considered to be the location of the final events in the tragedy of the “star-cross’d lovers”. Soon after Shakespeare wrote “Romeo and Juliet”, a real sarcophagus was placed in the courtyard of San Francesco, which was the only monastery outside the walls of Verona, and therefore the only plausible setting for the death of the young couple. At some point in the 13th century, the lid of the sarcophagus and its contents, were taken to a secret location, and have been lost to history. Marie-Louise of Austria, Napoleon’s wife, visited the tomb and had jewellery made from fragments of the empty sarcophagus.

Nowadays, the empty, single sarcophagus made from red Verona marble, can be found in the dark crypt. It is possible for couples to get married here and brides and grooms travel from all over the world to tie the knot in this shrine to eternal love.

Although Juliet and her Romeo may never have existed, the places associated with Shakespeare’s tragic heroine have become a memorial to romantic love, a testimony to the hopes and dreams of those looking for love and a symbol of belief in eternal fidelity. 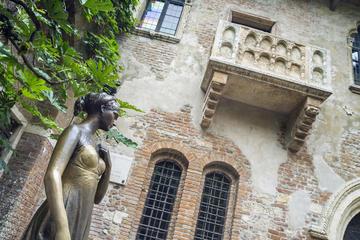 ♦ The nearest airports are Verona airport which has flights from The UK, Venice Marco Polo airport and Milan (Linate).
♦ Trains run regularly from Venice (1 hour away), Milan (1 and a half two hours) and Bologna (50 minutes).
♦ Juliet’s House is on Via Cappello, just off Piazza delle Erbe. The courtyard is free to visit. Entrance to the house costs €5. Juliet’s Tomb is located in the monastery of San Francesco. Entrance costs €4.50.
♦ Juliet’s House can get very crowded in high season. Try to visit off-season, or go early in the day or around lunchtime.
♦ Juliet’s Club 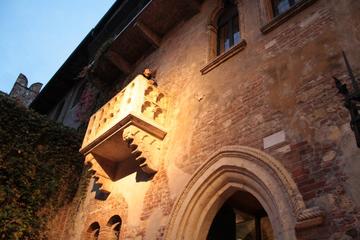 Photo credits:
Balcony of “Juliet’s House” in Verona by Guilhem Dulous / CC BY-SA
All other photos by Sarah Humphreys:
Juliet’s Statue
Graffiti in the Entrance
The Padlocks of Love