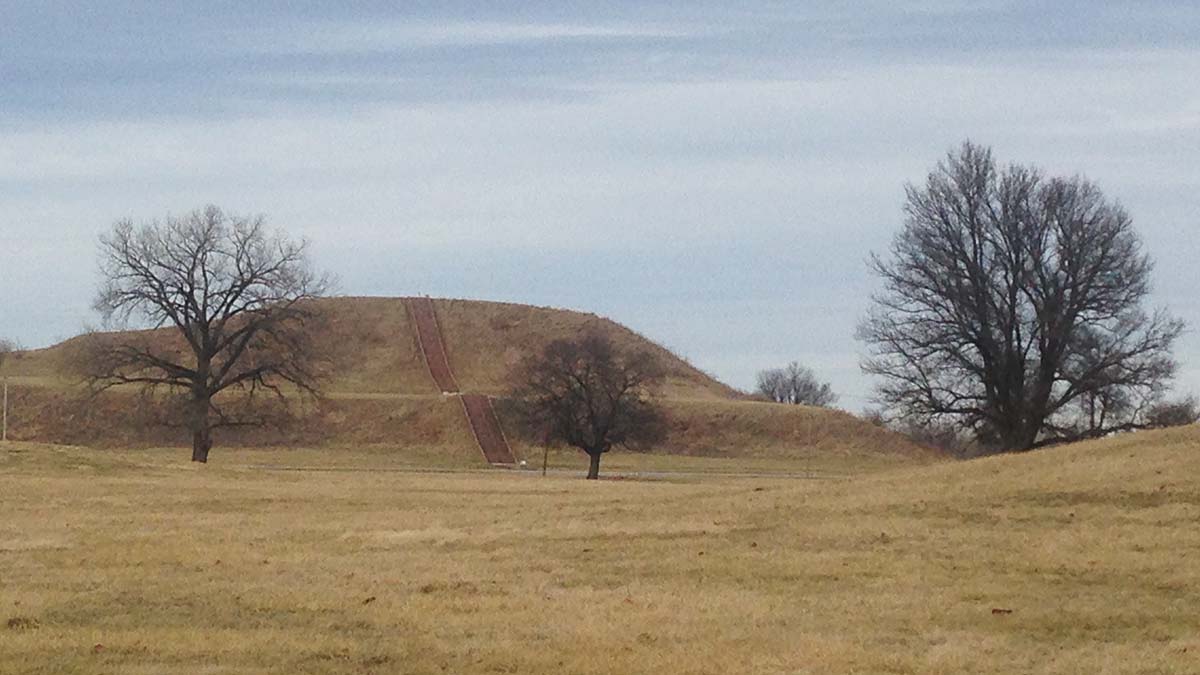 Few things are appealing about a 10-hour drive in the middle of February. The gray and brown landscape along a flat, straight highway isn’t exactly scenic. Fortunately for me, this particular drive was broken up by a stop to a major historical site that I may never have visited if it weren’t for this trip. I had casually mentioned the trip from Ohio to Kansas that I was planning, and an acquaintance told me to stop by Cahokia Mounds on the way. While researching this option, I was surprised to discover that this site was once home to the most extensive and advanced pre-Columbian settlement in the modern United States. Yet, somehow, I have no recollection of ever studying it or even hearing about it. 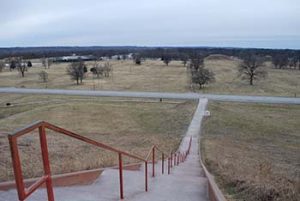 As soon as I went in the interpretive center at Cahokia, I was welcomed by a friendly volunteer who let me know the next film about the settlement would be beginning soon. I made my way to a large theater and learned a lot from the brief documentary about life at Cahokia. I then began to explore the exhibits, which rivaled those of some of the bigger museums I’ve visited. They talked about daily life in the past, the surrounding environment, and the excavation that unveiled much of what is now known about Cahokia.

As early as 700 A.D., people began small settlements at the site that later became Cahokia Mounds. By the settlement’s peak in the late 11th and early 12th centuries, Cahokia is estimated to have contained 10,000-20,000 inhabitants. For some perspective, that’s double the current size of Aspen, CO, and just a little bit smaller than Key West, FL. Those thousands of residents were spread out over an area that stretched for over six square miles. The size of the settlement is even more impressive when compared to other cities at that time. The settlement at Cahokia surpassed the size of London in that time frame, and no other settlement in North America surpassed Cahokia it until Christopher Columbus and his companions arrived on the continent.

In addition to its size, Cahokia is noteworthy because of its level of progress for the time. Of course, even maintaining order in a settlement of its size shows a certain level of advancement. An extensive display even lets you walk through a life-size model that portrays a typical day at Cahokia. Walking through the scenes that depict people working, cooking, and playing truly helps visitors envision life at the time. Other indications of the settlement’s progress are present as well. One noteworthy instance is a calendar system created by a series of wooden posts, now known as Woodhenge. Similar to the way in which a sundial can indicate the time, the posts of Woodhenge indicate the time of year. A recreation of this setup can be seen today at the site. 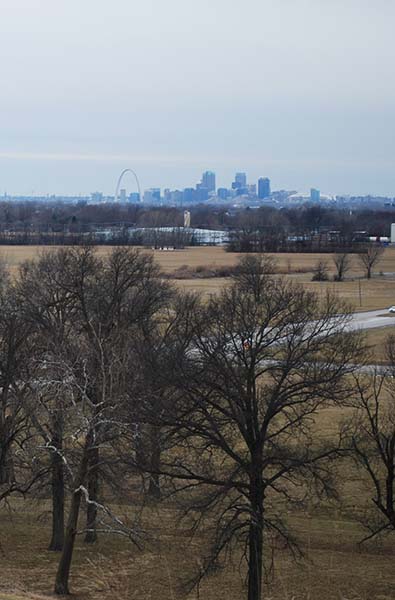 After thoroughly exploring the museum, I made my way to the main historic attraction at Cahokia: Monk’s mound. At 92 feet tall, this earthwork seems to be as prominent in the park as it was in the Cahokia community nearly 1,000 years ago. While Monk’s Mound is impressive from the surrounding ground, I was certainly glad I took the stairs to the top to see the skyline of St. Louis and the surrounding park below. Numerous smaller mounds fill the rest of the park and are linked by trails that meander through the grounds. If I had visited in a warmer month, I certainly would have spent more time exploring these trails and mounds.

The historical significance of the Cahokia Mounds is so great that it has even earned the revered designation of a UNESCO World Heritage Site, making it one of only 23 such sites in the United States. It’s listed alongside much more popular destinations, like Independence Hall and the Statue of Liberty. The mounds, recreation of Woodhenge, and interpretive center all help visitors understand why Cahokia certainly deserves that designation.

Cahokia Mounds is located near St. Louis, MO, and is not far south of I-70.

Cahokia Mounds’ website provides museum hours, a trail map, and other information that will be helpful in planning your visit. No admission fee is required, but suggested donations are listed, ranging from $2 for children to $7 for adults.

More information about the historical significance of Cahokia Mounds can also be found on UNESCO’s website.

About the author:
Kelley has had an interest in travel, writing, and photography for most of her life, she has only recently begun to combine these interests into travel writing. She created her website, www.aboutthedestination.com earlier this year. Kelley prefers destinations that offer great hiking opportunities and natural scenery; however, she enjoys exploring cities once in a while too.