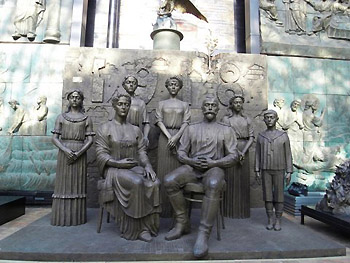 Changing the Artistic Face of Russia

Once you are in Moscow, as you walk down its streets, go sightseeing, visit the most popular tourists’ attractions, almost everywhere you find sculptures, mosaic or decorations of Moscow’s own sculptor.

“Moscow has its own sculptor?” you ask.

Actually, yes. It has its own chief sculptor who has changed the architectural layout of the Russian capital. His name is Zurab Tsereteli. He was born in 1934 in Tbilisi (Georgia) where he graduated from the Academy of Arts. In 1964 he studied in France where he got to know famous artists Picasso and Chagal. In 2003 Tsereteli obtained Russian citizenship status for outstanding service for Russian Federation and even nowadays he continues creating. Whether or not he has made Moscow more beautiful or only spoiled it are heated debates that will last forever. Let me provide you with the facts, some background information and pictures so that you can make your own conclusion and maybe, put an end to this endless argument. 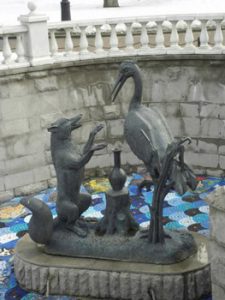 Let’s go to the Red Square, the heart of Moscow. In the Manezhnaya square, right in the Alexander Garden you will find sculptures that depict famous Russian fairytales. Look at the sculpture “The Old Man and the Goldfish.” According to the fairy tale this Fish can carry out three wishes of anyone who catches it. The Old man was lucky. He was very poor but had a kind and honest heart, so he just let the Fish free. But his greedy wife wanted to become the Sea queen so the Fish obeyed her. In the end the Goldfish punished the old woman for her greediness and envy.

Now let’s stroll along the Mokhovaya street, then turn to Volkhonka and in fifteen minutes we are standing in front of the Cathedral of Christ the Saviour. It’s the major Russian Orthodox cathedral, built to commemorate the sacrifices of the Russian people and their victory in the war with Napoleon. In 1953 it was blown up and completely destroyed. Only after more than 40 years did the reconstruction began. Although the construction was supported by many social groups, it was the center of many disputes, protests and allegations of authorities in corruption. Moreover a part of the society was so irritated that the author of the project was replaced by Zurab Tsereteli, under whose direction the original layout of the cathedral was changed. Thus he introduced several controversial innovations, such as modern bronze reliefs that you can see on the walls of the cathedral that are unusual for Orthodox architecture. Moreover wall paintings were done by artists recommended by Tsereteli, which cultural values are also disputable. 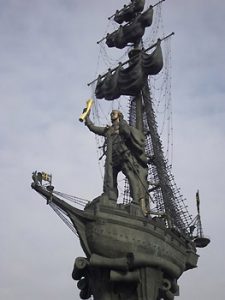 Now that you are familiar with some Tsereteli’s masterpieces I think that you are ready to look at one of the most scandalous sculptures in Moscow, the Peter I monument, standing on Moskva river. (Pictured left) Some Moscovites hate it, others laugh at the irony; there are those who like and adore it but nobody is indifferent. Peter the Great is the Russian tsar who had drastically changed its history. In a few words his policy was Europe-oriented. Historians say that he “had hacked through a window to Europe”. He used to send nobles to foreign educational institutions. He imposed on Russians European culture, reformed social structure, extended Russian territory in Baltic region and finally was titled the first Russian emperor. In fact it’s hard to underestimate his policy but still the majority of Moscovites don’t appreciate this sculpture. Why? Here’s three reasons that evoke lots of discussions and disputes around this monument. The first one is that fact this sculpture stands in Moscow because Peter I not only hated Moscow but he had been afraid of it since his early childhood. He clearly remembered rebellions, revolts and plots that endangered his life. This was one of the main reasons why he did his best to transfer the capital of Russia from Moscow to Saint-Petersburg. Secondly, Moscovites think that this monument is huge and ugly and doesn’t fit Moscow’s layout. If you look at the statue from the quay you will see nothing but Peter the Great. Far away you will notice a tiny church – the Cathedral of Christ the Saviour that seems so unimportant in comparison with the tsar. 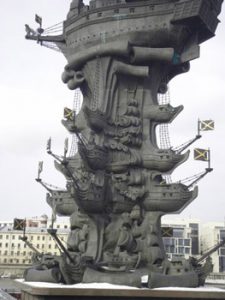 The third and the most scandalous reason is that Peter I monument in reality is the statue of Christopher Columbus! Initially Tsereteli created the statue of Columbus that was supposed to be placed in the USA. The mayor of Moscow and he made a gift to the North America but Americans politely refused to accept it. Tsereteli didn’t get upset, and made a brilliant decision: he replaced Columbus head with the Peter’s and placed the new monument by the Moskva river. This caused a huge stir.

Now let’s go to the museum. Right in the central administrative district of Moscow, ten minutes by foot from the Cathedral of Christ the Saviour, on Prechistenka, you will find the Gallery of Arts of Zurab Tsereteli. Few artists or sculptures can boast their own museum, but Tsereteli can. One of the most beautiful Moscow private residences of the Classical era holds the collection of his masterpieces. This permanent exposition represents all facets of his art: painting, graphic works, sculptures, enamel plastic art. There are also photos that illustrate his monuments which are placed in different parts of the world. 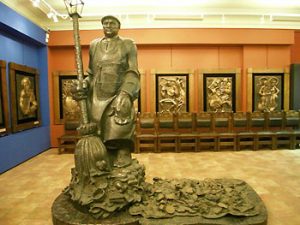 Tsereteli’s art, supported by the Russian government (especially Moscow), is often criticized by artistic critics and society. He is also reproached for “monopolization” of Moscow monumental projects, for violation of Moscow style, for gigantomania and lack of taste. Nevertheless his sculptures have become the inherent part of the architectural layout of Moscow, and we can’t deny his original style. Tsereteli is an experimentor who managed to combine almost all techniques of figurative art. The uniqueness of his art is multinational, he wants to show how the majority of cultural traditions and religions of different people coexist on the Earth. The fact that his masterpieces leave no one unfazed means that his works deserve special consideration and respect. Is a genius who has made Moscow more beautiful and unique? Or is he an untalented sculptor constantly imposing his sculptures? You must come to Moscow and see for yourself! 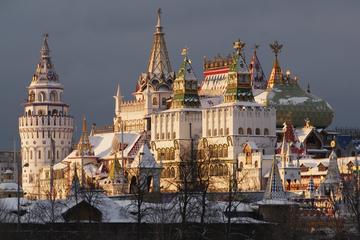 Although it is said that Russia is a country of permafrost, it isn’t always true. In summer it’s quite warm (25 C above zero), although there is always room for exceptions. In winter it can be rather cold so if you want to visit Moscow, it’s better to see a weather forecast (www.worldweather.org).

Moscow is an economic and political center of the Russian Federation and is one of the biggest cities in the world. As it is also a business center of the country, the traffic here is rather intense especially in rush hours, so sometimes its more convenient to use metro (news.metro.ru)

There are lots of places in Moscow where you can see Tsereteli’s masterpieces. I would advise you to visit the most popular:
The Cathedral of Christ the Saviour (Kropotkinskaya metro station)
Tsereteli Art Gallery (en.rah.ru)
The Alexander Garden (Okhotny Ryad metro)
Poklonnaya Gora (a bow-down hill)

If you want to learn more about the sculptor you can visit his official site: zurabtsereteli.com

All photos are by Maria Kozyreva.