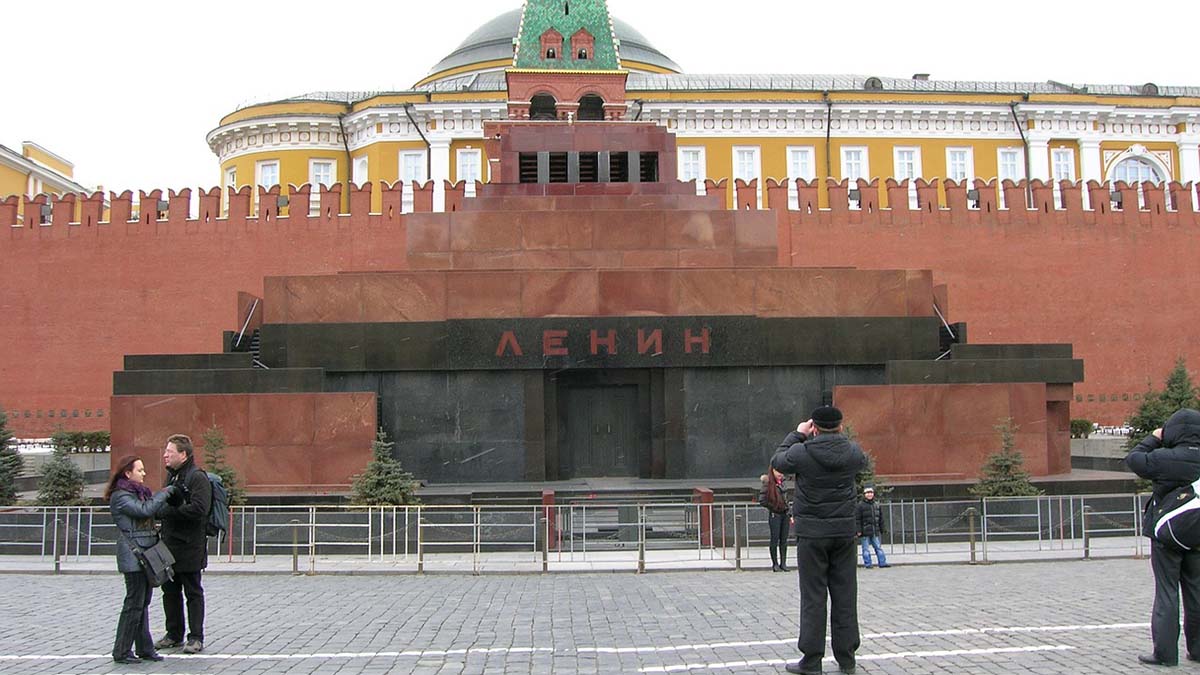 As I stared into the thick bulletproof glass separating me from the legendary dogmatic Russian leader I was surprised to see he was still looking his best. During the first few weeks after his death in 1924 Lenin was embalmed and set on display in Red Square. This enabled over ¾ million Russian citizens to pay their respects to the man who liberated them from the former socially destructive Tsar dynasty in the early 20th century. 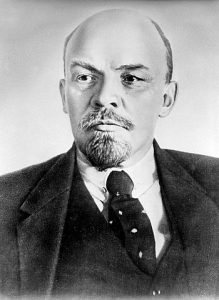 Born Vladimir Ilich Ulyanov, he became known as Lenin whilst in exile in Siberia during the early years of his political career. Some say he took his name from a nearby lake or from his middle name Ilich. Resting in a grand red granite mausoleum, Lenin’s cyrillic name is set atop the entrance echoing a turbulent Soviet and Russian past.

I arrived in Red Square on a blisteringly cold January morning and was instantly taken aback at the incredible sight of St. Basil’s cathedral, the Kremlin and Lenin’s Mausoleum. Red Square’s infamous red brick and cobbled stone have seen witness to public executions, Soviet parades and rock concerts. Even though at the time I only had a hazy knowledge of Russian history, Red Square is a truly spectacular sight and a historical attraction I had always wanted to visit.

As I joined a long queue of weary tourists I struck up a conversation with a fellow Englishman who was visiting Lenin for the second time. He explained to me that during his first visit he queued for well over two hours before arriving at the airport style security checks only to be turned away because he still had a mobile phone in his pocket. Thankfully, entrance to the mausoleum is free, however visitors should be mindful to store any cameras, mobile phones or bags at the cloakroom nearby to the mausoleum.

Luckily, I only queued for half an hour before reaching the security barriers. The sullen faces of the soldiers manning security gave the impression that this was one of the more menial tasks given to a Russian soldier and it lead me to conclude that they did not want to be there. 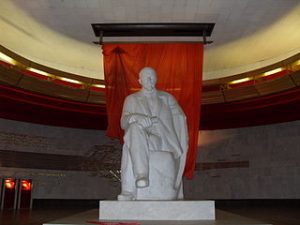 The atmosphere was tense and by this time all visitors had taken their hats off apart from me. This was much to the annoyance of one soldier who angrily motioned for me to remove my hat immediately. Now accompanied by two armed guards, we descended down three dark flights of stairs until we reached the crypt.

The crypt was dimly lit and five heavily armed guards stationed in different corners of the room watched us intently as we entered. Lenin, complete in his replica 1920’s style suit (the original was replaced in 2003) and trademark white spotted tie he almost looked peacefully asleep behind the glass. His head rests on a velvet pillow with his arms by his side and the embalmed communist leader could have been mistaken for a wax model at Madame Tussauds. I learnt afterwards that both the temperature and lighting within the tomb are meticulously monitored to ensure that Lenin’s body will continue to be seen by millions of people in the years to come.

As we came out of the mausoleum into the cold Russian air we were guided along a series of gravestones and busts of some of Russia’s most famous figures including Josef Stalin, Felix Dzerzhinsky and Mikhail Kalinin. There is also a plaque dedicated to Yuri Gagarin, the first man in space.

For any traveler visiting Moscow and Red Square Lenin’s mausoleum is a definite must see especially for those who have an interest in Russian history. An experience that you won’t forget in a hurry. Vladimir ‘Lenin’ Ulyanov revolutionised Russia and is one of the most charismatic figures of the early 20th century. 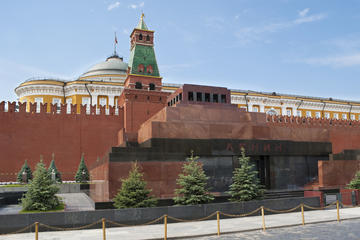 Tour to The Lenin Mausoleum in Moscow Russia

♦ Leave cameras at home! Whilst there is a cloakroom facility next to the mausoleum, it is expensive and you definitely won’t be allowed inside with any digital technology.
♦ Arrive early! There will always be a queue to visit Lenin. On weekends and peak times queues can last up to four hours. Just because you’re in the queue it doesn’t mean you’re guaranteed entry either. It’s all up to the guard’s digression.
♦ Check the opening times! Lenin’s mausoleum is never open on a Monday but is open from 10am – 1pm Tuesdays, Wednesdays, Thursdays and Saturdays.

About the author:
Fuelled by his love of travelling and being on the road, Adam Bennett has written some unique and compelling articles from his experiences across the globe. From visiting dogmatic political figures in Red Square to recounting stories of touring and busking throughout Europe. Adam Bennett gives a delectable insight into the world of nomadic travelling.