Travel can be about getting from one tourist hot spot to another, and thus, neglects the opportunity to really connect more with the locals. But for one travel opportunity that takes place in off-the-beaten-path areas of Spain, it’s not possible. The sightseeing and culinary temptations afforded there take second place behind the opportunities to really connect with some of Spain’s populace thanks to the Madrid-based language training firm Diverbo.

The programs are known as Pueblo Ingles, where Spaniards who want to learn to become more fluent in English come together with English speakers (referred to as “Anglos”) to do one thing over the course of eight days: interact. 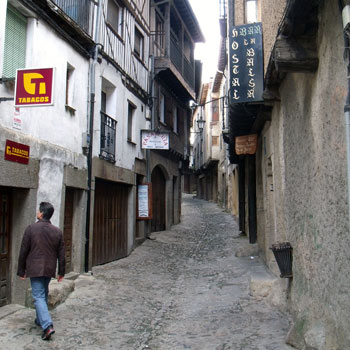 It had been five long years since I had participated in the program at the hotel-resort Abadía de los Templarios Hotel, a 15- to 20-minute walk from the town center of La Alberca, which is located in the western Spanish province of Salamanca amid the Sierra de Francia mountain range.

Surrounded by the colors of autumn that proudly emanated from the woodlands surrounding the hotel as well as the cascading foothills and mountains, I wondered if the magic that always happened in the past when scores of Anglos and Spaniards being thrown together for eight days might not be as mystical as before.

My worries were soon abated because the process of volunteering to help Spaniards become more confident in their English skills plus the gifts that the Spaniards themselves would give back to us, i.e., their insights into life, acceptance, and good-natured friendliness, would once again result in a rousing success. 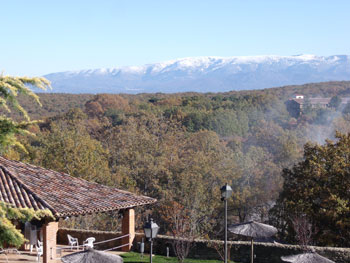 The program officially started on Friday morning in Madrid, where some 36 participants (including myself) headed to La Alberca via a three hour-plus bus ride (or personal automobile for some Spaniards) through rolling pastures and farmlands after leaving the urban sprawl of Spain’s capital city. On the bus, Anglos and Spaniards were paired up, so the latter could begin their intensive language exposure.

After making it to our destination, our Master of Ceremonies, Andy, a Scotsman whose job was to foster the social and recreational activities for the participants, good-naturedly laid down the “3 Laws”: “No Spanish. No cell phones (which can be quite a distraction from interaction time). Have fun.” Each program also has a Program Director (Marta this time around), whose job it is to manage the details/problems and the daily schedule.

One of the first group ice-breakers involved a game called “Human Bingo,” which involved talking to everyone else to find out which among us, among other things, has a tattoo, has been water skiing or can dance the Sevillanas, so we could fill our boxes up. 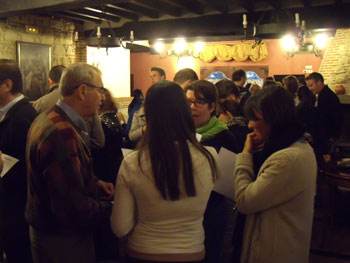 Who are these Spaniards who are there at the behest of their company or their own volition? Typically, a group is made up of professionals from various fields such as IT, production, and other fields. They are generally in their 20s or 30s, but some are older. One such Spaniard, Angel, an IT professional, was actually on his fifth program. Before taking part in Pueblo Ingles, he commented, “I didn’t understand anything,” but the intensive exposure time had increased his confidence and understanding of the language’s nuances. Another Spaniard, Rocio, who works for an energy renewal company, had studied English since high school, but remarked on her primary reason for coming, “My biggest problem is my listening. My listening is very bad.”

The mix of English speakers had a strong showing from America, including Wyoming (my state), California, Colorado, plus Wales, Australia, and Canada (a country which continues to have strong Pueblo Ingles participation). So with all those accents being targeted at the Spaniards for eight days, there was nothing for the Spaniards to do but actually improve. 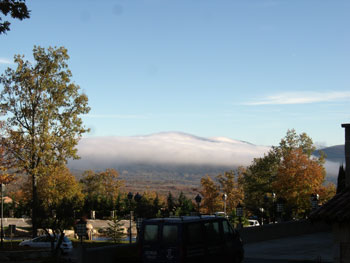 Rick, a 74-year old former teacher and coach who’s taught English in China, heard about the program via word of mouth when he was in Germany (the method which has brought many Anglos to the venues). He emanated a common sentiment among the Anglos, “I want to learn more about the Spanish culture, the food. I want to help them speak English.”

Being caught up in the hustle and bustle of the flowing daily schedule (beginning at 9 a.m. through well after 10 p.m.), I lost all sense of time, not being able to tell one day from the next like I can when back home. The peaceful surroundings and slower pace of life in La Alberca made it feel as if I were in another world, not caring what was going on elsewhere.

You never know who you’ll meet when you go, given that the mix of people and their unique personalities constantly change with each program. As an avid runner, I found a kindred soul in one Spaniard named Ignacio. He’s participated in major marathons around the world, including the one in Boston, finishing the race just before tragedy struck this past April 15. 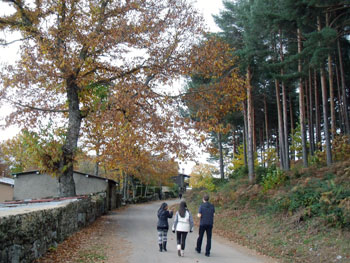 During one of our two-hour siestas and one of the one-to-one sessions, we took walks to the center of town, full of half-timbered houses and shops where one could obtain many things, from a can of Coca-Cola to a scarf, hat, and gloves, the latter three which my new Spanish friend found himself in need of. Our brisk walking on winding roads amid the captivating autumn foliage kept us warmer as chilled afternoons gave way to darkness. He gave me more insights on the activity since his ability to run 26 miles-plus puts my ability to run only around six miles daily to shame. As we walked back on the road leading back to the hotel through woodlands, pasture, and small farms, we could hear the soundtrack of baaing sheep and oinking pigs.

La Alberca itself has been around since the pre-Roman times, and has seen its share of past conquerors from the Romans, Arabs, Christians, and now English speakers trying to help some conquer their fears surrounding the language. For those who pay attention, there are reminders to be seen around town of the Spanish Inquisition and its place on the Santiago Trail, which hang above some of the entryways to the antiquated doorways of centuries-old domiciles. La Alberca was the first village to be declared a National Historical Monument in Spain. 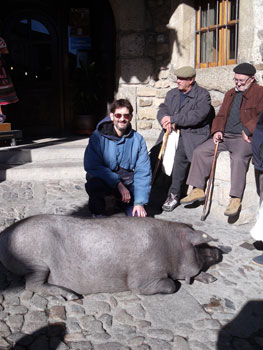 Ignacio and I were lucky enough to catch a common spectacle of a pig that’s allowed to run freely around town to garner handouts from the 1,000-plus locals (plus tourists) as it fattens up so it can be raffled off. We saw some girls being chased by the pig after they stopped giving it handouts. Salamanca is an area where ham products, especially from the limbs of the pig, are considered delicacies.

But it isn’t just one-to-one conversations that brought the group together. The course of the day is run like clockwork to the tolling of a church-like bell at the resort on the hour to summon the participants back to do other things like two-to-two group conversations about social and political issues, plus group activities that might see groups of six or so coming up with a new invention or new song. Nonetheless, the variety in the activities helps the Spaniards interact in English. It culminates before dinner time with nightly entertainment that can feature anything from individual presentations to a comedic skit, where props and costumes are used to garner laughter from the audience. 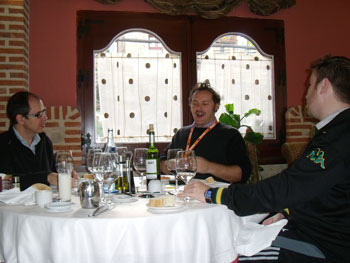 Some of the most connective moments between the participants take place during the meal times, where the table wine (lunch/dinner), tasty cuisine and conversation generously flow. Breakfasts can be a bit more laid back, given the Spanish penchant for kicking up one’s heels well into the wee hours of the morning with willing Anglos. After all, to a Spaniard, 8 p.m. is still considered “afternoon.”

The transformation that took place over the week was not only noticeable for the Spaniards, who learned to even understand my Wyoming accent better, but also for the Anglos. That is, many of them were put in the position to where they had to get up before an audience and help take part in one of Andy’s plays, or do their own presentations, such as Daniel, who expounded on his knowledge of body language, while the septuagenarian Rick led the audience in some sing-a-longs. Spaniards were expected to make daytime presentations on various subjects before a selected audience to improve their presentation skills. 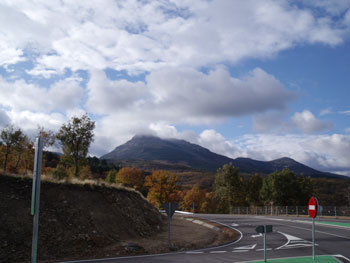 As a seasoned veteran of this program, I couldn’t get over just how perfectly put together this group was, which is credited to the Anglos Dept. in Madrid, who do their best to match the participants up based on the application they must fill out online to be considered for a holiday that sees their room and board covered over the course of the program for their volunteer service.

By the time the program ended the following Friday, it was hard to leave this adult version of “summer camp” and go back to my everyday life in Wyoming. I had gotten so used to the daily schedule and the people, saying goodbye wasn’t easy. Our group talked a lot, laughed a lot, and would ultimately share some goodbye tears while Spaniards like Rocio and Angel gained more confidence in their second language, despite being mentally drained.

As volunteers, we gained more insight about life in Spain and despite our differences in cultures, the commonness of humanity played out as each of us learned that we all share dreams of bettering ourselves and making new friends. In a nutshell, us Anglos became more fluent in the language of life.

♦ Find out more about the different venues in addition to La Alberca, the application process, and what’s expected of volunteers at the following link: www.diverbo.com/en/volunteer-abroad
♦ More about the hotel-resort Abadía de los Templarios Hotel at La Alberca (which is in Spanish) 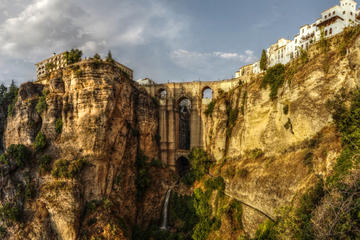 Private tour of Ronda and winery from Malaga

About the author:
Roy A. Barnes writes from southeastern Wyoming, and is a frequent contributor to Travel Thru History. His history with Pueblo Ingles goes all the way back to 2001, when he participated in the fourth-ever program. The program just written about was the 838th.
Disclosure: The writer attended the program at the invitation of Diverbo, but neither his article nor observations were vetted by the firm.

Photographs:
Photos are credited to Roy A. Barnes, and may not be used without permission of the author. Photos showing participants were initially screened, then cleared for editorial, non-commercial usage by Diverbo.