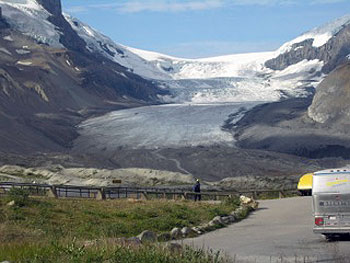 It has been called the most beautiful drive in the World. 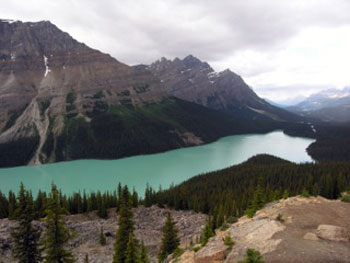 And it is but a small part of the God’s carven world of the seven Canadian National and B. C. Provincial Parks hugging the Rocky Mountains’ Great Divide. So stunning the national parks; Kootenay, Banff, Yoho and Jasper along with the B.C. Provincial Parks Assiniboine, Hamber and Mount Robson were declared a UNESCO world heritage site in 1984.

It had been years since we last visited the parks but our connection with them ran deep from distant days of cross Canada hitch hiking to four years living in Golden B.C.; where the parks rose within our backyard.

Those days truly were golden and we would merrily hazard, year round, the nail biting ten miles of the Kicking Horse Canyon, grown familiar from use, to enjoy vistas, hikes, skiing or soaking in hot springs.

The parks are as large as they are breath taking and, it bears remembering, are the wild. There are too many sorry remembrances of those who failed to heed warnings only to perish over a waterfall or succumb to hypothermia trapped in a glacial crevice. This is not Disneyland though its natural artistry can make it seem other worldly. 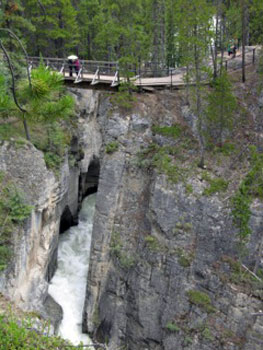 Our now grown children with children of their own were but pre-teens when we last drove the parkway between Lake Louise and Jasper and we were stunned to see how far the Athabasca Glacier, that long intrusive tongue of the massive Columbia Icefield, had retreated. Already in natural retreat there are signs acknowledging the decline that have been hastened by global warming. They spoke of the advancing flora chasing the fleeing glaciers and of the inherent change so bespoken for wildlife. Where once the icy tongue licked the opposite side of the valley, at its greatest extent in 1844, the long flight saw it now crawling into the very folds of the great icefield itself. Here, atop the World, the ice achieves depths of 100 to 365 metres; enough to engulf cities, skyline and all.

We hiked to the valley floor, lapping at the glacier’s tongue, appreciative of our jackets; the temperature noticeably dropping as we neared the deceiving dirt covered glacial lip. High above a line of hikers plodded dutifully behind their guide across the ivory face of the glacier and crawling snow-cat coaches took folk to a cleared parking area on the ivory expanse. Even late in August the site was abuzz with tourists from the world over. Above a sky with a teasing Sun tossed looming mountain faces into erratic moods. The glacial edge was awash with rushing waters spilling their way to one of the three oceans fed by the icefield. As if to draw attention to its raw beauty a section of the tongue had fallen away to reveal the deep turquoise inner body of the ice, old beyond recollection.

If the Columbia Icefields are a singularly outstanding experience on the 170 kilometre parkway they are not the only easily accessible works of wonder. 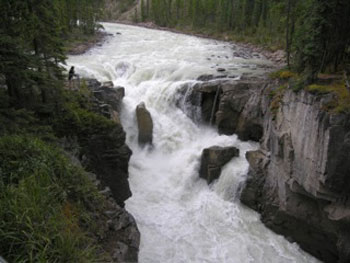 Turquoise hued Peyto Lake is a short uphill jaunt from the highway parking lot. Oft photographed and resident on many a calendar the lake is laid out resplendent, guarded by its mountains and replenished by thin cascades streaking across their faces. Named after historic early trader and guide, Bill Peyto, the lake is safely viewed from a guard-railed viewpoint.

Short distances from the highway are stunning examples of the power of water as Sunwapta Falls and Mistaya Falls continue their wild white-water thrashing through rock with relentless authority creating art in the process.

Jasper’s southern cousin, Banff, is well renowned for its picturesque namesake huddled in post card perfection beneath Mount Rundle. Our journey this time took us to two favoured haunts. 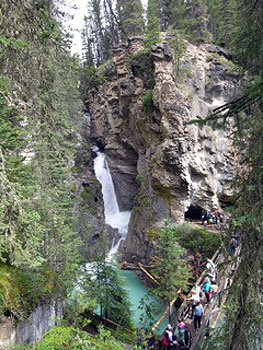 The Johnston Canyon waters ran cold and clear through the narrow chasm carved over the millennia, spilling white fury in misty display as they pass. It is claimed almost one million people annually trod its tended pathways, bridges and ramparts which swing over the very turbulence itself. Despite crowds politeness prevailed as people quietly stopped to let others pass. Cameras, hung at the ready – necessarily so as you would just take one picture only to find another waiting around the corner. At the lower falls (30 minutes in) rock walls appeared to almost close and the waters pounded into a pool hidden within a a hollow accessible through a carved tunnel at the end of a bridge crossing the chasm. Spectacular in the extreme, people lined up to experience the pounding, misty cavern.

As the ascent steepened so the crowds dwindled and far fewer achieved the upper falls (a further 30 minutes) pounding and roaring in the open welcome of the Sun. The viewing platform hung near the precipice offering glorious views of the tumbling cascade.

The further two hour journey to the paint pots it is a worthy destination though warranting making Johnston Canyon a full day venture. 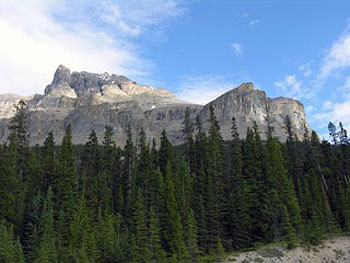 Our second site sat, a hidden Shangri-La, high above the opulence of Lake Louise with its glacial backdrop and turquoise waters. To reach Lake Agnes takes a bit of effort; wending the switch back trail to the rock outcrop upon which a log tea house sits and a thin cascade tumbles free to Mirror Lake far below.

The remaining steps from the pool, though steep, are short and reward you with a view of mountain girded Lake Agnes, the welcome of tea and a sandwich or sweet. It is worth the wait for a seat if crowds abound. In the mean time you can delight in the entertainment of chubby little chipmunks scampering about and rubbing their paws in anticipation of tidbits. A further clamber to the Little Beehive will reward you with a National Geographic view of Lake Louise lying jewel-like far below.

Adjacent to Banff the allure of Yoho National Park gives pause for a lengthy holiday in a seemingly endless world of the spectacular. A favourite journey was to the towering thunder of Takkakaw Falls, the second highest waterfall in Canada. It is a steep drive, switch backing the heights, to the eventual applause of the falls. The roar of the falls is matched by the hordes of viewers oohing and awing below. A little effort and rock clambering can draw you within the aura of sound, sight and mist and immersion in the experience. 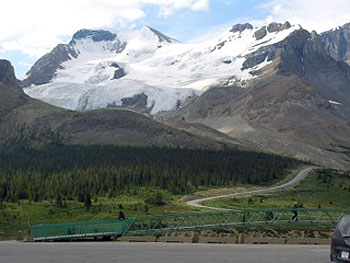 A short distance west from Takkakaw is the turnoff for Emerald Lake and the Natural Bridge. If it lacks the power of Takkakaw the Natural Bridge makes up for it in methodical carving of rock into forms as unique as a Henry Moore art piece. Where once a full natural bridge hung over the rage-whitened face of water but a vestige remains, itself a passing entity. Emerald Lake lies at the foot of the mountains, red canoes dotting its surface, even as the lodge recalls images of romance. At the parking lot a little ground squirrel community has entertained visitors for years. In the midst of wild beauty sits peace.

It takes a special trip from these parks to the southern most of the National Parks; Kootenay. 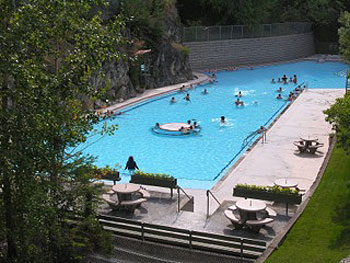 During those family days in Golden we would take the winter drive to Radium Hot Springs and the Sinclair Canyon jaunt into the park under the red-eyed gaze of the canyon cliffs to immerse ourselves in the inviting hot spring pools. The bracing cold did not encourage lingering in the hallway leading to the protected pool access but once within its warming confines soothing sensation embraced the entire body. In my bearded days both beard and hair would freeze in Santa Claus fullness to be melted away with a luxurious dip underwater. Mists covered the pool surface in eerie fullness parting occasionally to bear witness to mountain sheep cavorting on the rocks above. Lounging in the warmth of the pool, an experience even more appreciated with the aches of age, and gazing up to the surrounding mountains, is meditative and renewing.

So what is the point of waxing eloquent upon but a few of the many attributes of the Rocky Mountain National Parks? The World knows of them and clambers to their doors, perhaps, making visits during the high season a challenge. For Canadians they are a gift of natural majesty all should experience at least once in the full recognition there is more than can possibly be seen in one trip. With seasons and the moods of weather they are an ever changing canvas upon which majestic beauty never ceases to find new expression. They serve to humble us but also engender appreciation for nature and that which we risk losing when we fail to appreciate and care for it. 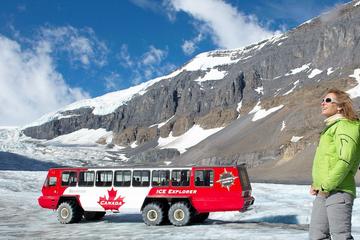 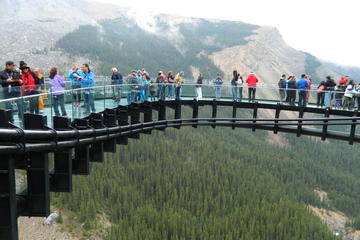