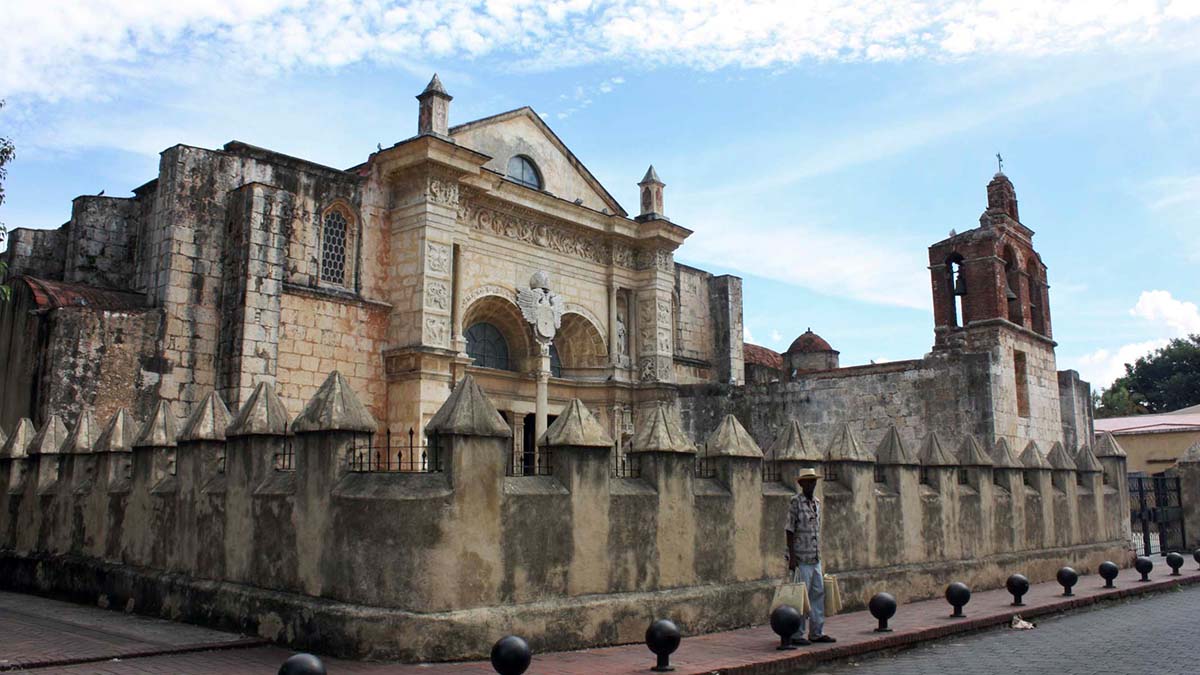 The City of Firsts

Echoes of clanking armor, clashing swords and horse’s hooves conjure up images of Spanish conquistadors as you stroll along the cobblestone pathways of Santo Domingo’s old center. Amidst this 500 year old backdrop you can almost envision yourself setting off to discover new worlds with the likes of Hernan Cortes and Francisco Pizarro.

Begin your tour at the “modest” Columbus family home. The Alcazar de Colon (Spanish for Columbus) was constructed in 1517 for Christopher’s son Diego, who became viceroy of the colony, and his wife Maria de Toledo, niece of Spanish King Ferdinand. This 22 room fortress was occupied by their descendants until 1770 when it was abandoned and allowed to deteriorate. 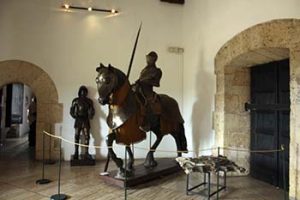 Now restored, the front façade reflects the Mudejar style common in 16th century Spain. The furnishings represent the age but are not original to the family. Passing through the front door into the foyer, a mounted suit of armor ushers you into the dining room. Used for formal government functions, this dining room contains a dark wooden dining table and cabinets. A gargoyle to the right of the door kept diners safe from evil spirits. As an additional precaution, a food taster sampled everything before guests began their meals.

The second floor features Diego’s office where pictures of Christopher and Diego Columbus size you up as you review copies of official documents authorized by Queen Isabella. The adjoining family living room has two large windows that open out to a balcony overlooking the Plaza de Armas (Plaza de Espana). From here Diego could supervise his soldiers parading around. Today you are more likely to look out over art shows and concerts rather than military drills. 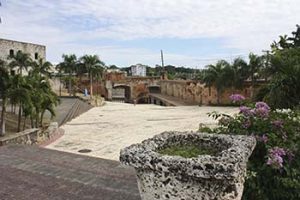 Adjacent to the Alcazar, the San Pedro Gate connects the Plaza de Armas with the Ozama River. Spanish ships docked outside and priests, the only literate residents of the city at the time, would complete the necessary paperwork before the cargo was unloaded and transferred into warehouses (Las Ataranzas) straddling the plaza. A number of these former warehouses still stand and have been converted into restaurants and touristy shops.

Wander down the cobblestoned Calle Las Damas, the oldest street in the Americas, named for Maria de Toledo’s Ladies-in-Waiting that often strolled here. En route you find a cluster of three cannons that provide a warm welcome to cruise ships. 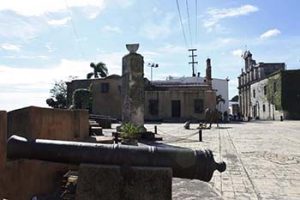 The cannons are accompanied by a large sundial (reloj de sol) that dates to 1753. The reloj del sol has a vertical face set on both the southwest and southeast sides of a large stone pillar in order to determine the time in the morning and afternoon respectively. This sundial was the official time piece for the colony and could be seen from the former government building across the street known as the Casas Reales.

Cross the street and enter the Museo de la Casas Reales. Constructed in 1520, this was the official residence and office complex of the Spanish Governor. The upper floor houses a reconstructed Governor’s Reception Hall with its canopied throne and portraits of past Spanish Monarchs including Felipe II and Carlos II. 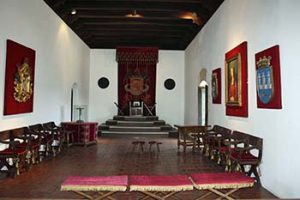 Next door the Royal Audience Hall, site of the colonial Supreme Court, features a raised throne at the far end of the room with chairs lining the side walls and benches at the back. The adjoining Anteroom of Royal Agreement at the rear was used for both jury deliberation and a prisoner lock up.

The museum also features exhibits from 1492 to 1821 including documents written by Christopher Columbus, navigational instruments used on sailing vessels, instruments used in the slave trade and a reconstructed colonial pharmacy. A fine collection of Taino Indian artifacts is also on display. 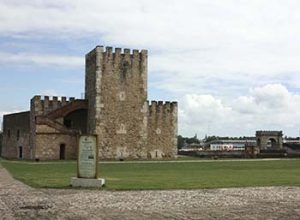 Continue your stroll along the Calle Las Damas to the Fortaleza Ozama where you find the oldest fortress of its kind in the new world. Passing through the ebony gate of this 1503 military outpost, you are confronted by the medieval-looking Tower of Homage. This imposing structure, constructed of coral blocks and at one time the tallest structure in the colony at approximately 18 yards, kept a watch over all approaching ships. 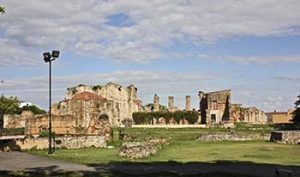 Despite these formidable defensive fortifications, Englishman Sir Francis Drake and crew landed at Santo Domingo in January 1586 and brought the entire colony to its knees. He systematically burned the city until receiving a ransom of 30,000 crowns. You can still see evidence of Drake’s rampage at the ruined Monastery of San Francisco.

Exit the fort and take the short walk to the Plaza de Colon in front of the cathedral. This large open park with benches nestled under shady trees is the perfect place to hide from the warm tropical sun and just people watch. A large bronze statue of Christopher Columbus provides you with some company. 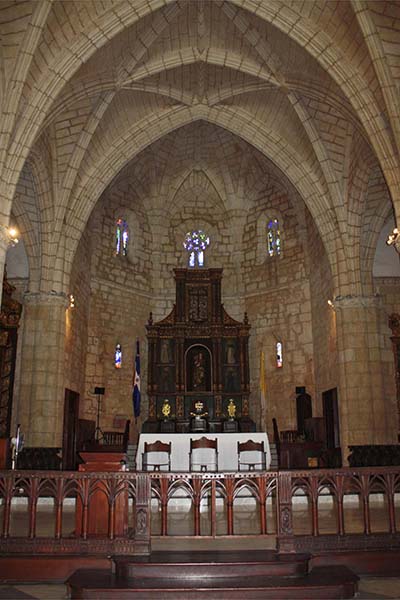 After cooling down, make your way to the Cathedral Primada de America [TOP PHOTO]. In 1542 Pope Paul III recognized this cathedral, constructed between 1523 and 1541, as the first in the Americas. Residents of Mexico City might dispute this claim however. Their first cathedral was constructed between 1524 and 1532 and remained in use until 1573 when it was replaced by their present structure. Despite the overlapping dates, Santo Domingo can safely lay claim to having the longest operating cathedral in the new world.

Built in stages, the cathedral interior is constructed of honey-colored limestone in both Gothic and Baroque styles. Reredos of saints stare down at you as you approach the apse with its mahogany high altar adorned with silver plate figurines.

The crypt once held the remains of Christopher Columbus for almost four centuries. Now his final resting place is the subject of much debate. Dominicans state that Columbus is now entombed inside the lighthouse known as El Faro de Colon while residents of Seville Spain insist that he rests inside their cathedral. The Government of the Dominican Republic has steadfastly refused to clarify mystery by means of DNA testing.

Your tour concludes when you exit the cathedral. While there are many other discoveries waiting for you in the Zona Colonial, you may have worked up an appetite. Consider trying a delicious Creole meal at the Pasteleria Mimosa. I highly recommend the Creole chicken and plantain. When you are finished eating, continue with your own exploration of this new world. 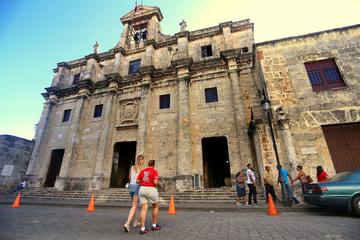 About the author:
Troy Herrick, a freelance travel writer, has traveled extensively in North America, the Caribbean, Europe and parts of South America. His articles have appeared in Live Life Travel, International Living, Offbeat Travel and Travels Thru History Magazines. Plan your vacation at his ”PlanADreamTrip.com” sites.