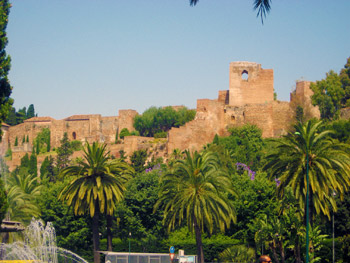 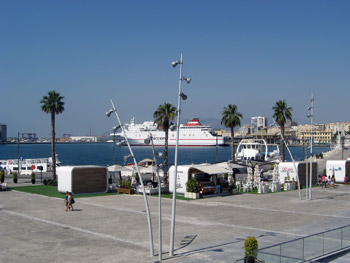 The rich history of Málaga goes as far back as the 8th century BCE when the Phoenicians founded the trade settlement here they named Malacca. The name is derived from the Punic, malac meaning ‘salt’, as Málaga was founded as a fish-salting settlement. The Phoenicians, Greeks, Romans, Visigoths, and Moors all left their mark here and throughout the centuries, Málaga continued to thrive as a chief settlement and established harbor. Today, the port of Málaga stands as the second largest in Spain after Barcelona.

Of the eight provinces of Andalusia (Spain’s southern region), Málaga is actually the smallest in size, however, it stands proudly as capital of and gateway to the Costa del Sol (Coast of the Sun.) However, Málaga City is often overlooked by tourists who travel directly from the airport to such popular resort towns as Marbella and Torremolinos while missing out on the great historical and cultural wealth this cosmopolitan capital city has to offer. Málaga City is best explored on foot as the major attractions, such as sunny beaches, galleries, museums, parks, boutiques, restaurants, bars, cafes, and historic sites, are all within walking distance. 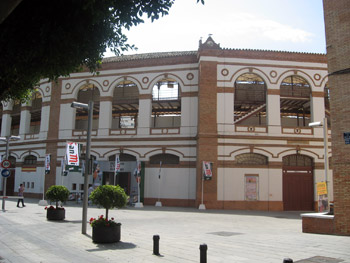 The first time I landed at the Pablo Picasso International Airport, I was pleasantly surprised by the display of reproductions of the Málaga-born artist that adorned the walls of the corridor of Terminal T2 known as Pablo Ruiz Picasso. Art-lovers can visit the Museo Picasso Málaga located in the city center dedicated to exhibiting over 200 of his works. At the nearby Plaza de la Merced, stands the birthplace or Casa Natal where the famous artist was born in 1881. Just over a century later, it was declared an official heritage site and today, it stands as a foundation promoting his works.

Not far from the Pablo Picasso Museum stands the bullring, Plaza de Toros de La Malagueta, and bullfighting museum, Museo Taurino Antonio Ordóńez. The arena accommodates up to 14,000 spectators during bullfights that are held here between April and September each year. 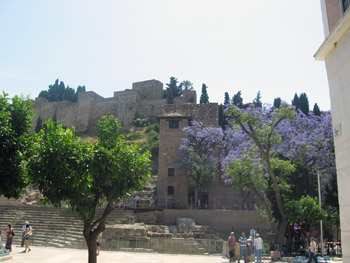 Although, I am not a fan of the sport, I decided to visit at a time when no bullfights were scheduled. I ventured out into the vast bullring and I have to admit that it was quite impressive and strangely peaceful. After a few minutes, I noticed two young boys in the middle of the ring who were practicing or training to become bullfighters or matadors. The boys had cleverly attached what looked like set of horns to a type of cart that was wheeled by one boy as he constantly rammed his way towards the other who was gracefully dodging and darting his way, almost as if dancing, while maneuvering his cape. I smiled and thought to myself that I much rather preferred to have seen this than an actual bullfight!

Barely a 15 minute walk from the bullring brings you to the Museo de Arte Flamenco de Málaga. Filled with fascinating memorabilia, the museum exhibits flamenco guitars, traditional colorful costumes, vintage recordings dating back to the 19th century, as well as numerous photographs and lithographs of famous local Flamenco performers of the past. Flamenco shows are held here on Friday nights at the Peńa Juan Breva located in lower level of the building.

However, when it comes to Flamenco performances for visitors, the most highly recommended venue is the restaurant Vino Mio located in the city center. Every night, shows are held here between 8 to 9:30 PM in order to accommodate tourists as most Flamenco shows begin much later in the evening. A 4€ supplement is added to the meal if you wish to enjoy the performance.

A 5-minute walk from the restaurant will bring you to a bright orange building where Málaga’s wine museum or Museo del Vino is located. Málaga has been celebrated for its sweet wines since the Phoenicians arrived, and throughout the centuries, the Greeks, Romans, and Moors continued to develop their own particular varieties. Today, over 2 million liters of wine is produced in the province of Málaga each year.

The wine museum is housed in an 18th century building where guided tours teach you about the history and culture of the wines made in the province. The 5€ entrance fee covers the cost of two wine samples of the more than 100 different varieties available. Wine-tasting tours to the wineries on the outskirts of town can also be arranged. Amusingly, a particular chain of bodegas situated in the province of Málaga are named Quitapenas, or “sorrow-removers”. 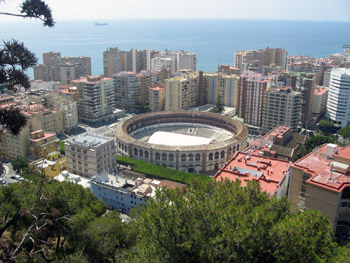 A 10-minute walk from the wine museum will take you to the magnificent Roman and Moorish vestiges located in the eastern part of the city. The Moorish structures include the 11th century fortress or Alcazába and the 14th century Gibralfaro Castle; both built by the Moors over Roman ruins upon a hill overlooking the city and harbor. The Alcazába is considered as one of the best preserved Moorish fortresses in the country. The fortress once stood as the royal residence of Sultans and today stands as a true landmark of the city adorned with Caliphal arches, majestic courtyards, tiled patios, look-out towers, and jasmine-scented gardens. Ornamental fountains and pools decorate the tranquil grounds leaving one with a sense of peace from the soothing sounds of trickling water that can be heard throughout the grounds as is customary to Muslim tradition. 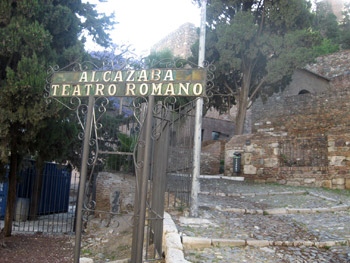 The Gibralfaro Castle is actually older than the Alcazába as it dates to the 10th century, however, it was during the 14th century when it was rebuilt and enlarged in order to protect the Alcazába that was otherwise vulnerable to attacks approaching from the hills. During the days of Muslim rule, the sea reached all the way to what once were the lower ramparts. Today, spectacular views of the city, bullring, and port can be appreciated from the Gibralfaro Castle.

As if these Moorish vestiges were not enough, ruins of a vast 1st century BCE Roman stadium or amphitheater lie at the foot of the entrance to the Alcazába. To build their fortress, the Moors actually recycled blocks of the Roman arena that once accommodated as many as 20,000 spectators. The grandness of the stadium reflects the significance of Roman Málaga during its day. Yet, throughout the centuries to the present, Málaga continues to thrive as a vibrant city offering a multitude of cultural attractions and charming historical sites. 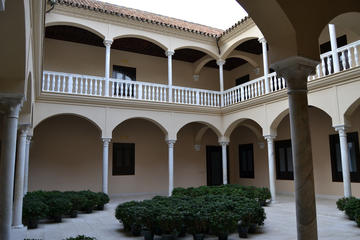 ♦ The center of town is easily accessible from the airport by a short bus or train ride. The bus and train station are within walking distance to all major sites within the city.

♦ Visit the official site of the Málaga Tourism board: www.visitcostadelsol.com 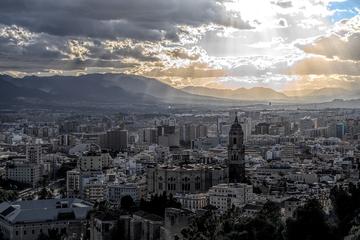 About the author:
Ana Ruiz was born in Spain and is the author of two books on the subject of Spanish history and culture. Visit: ana-ruiz.weebly.com 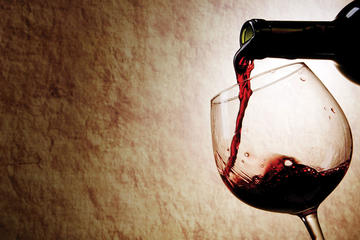