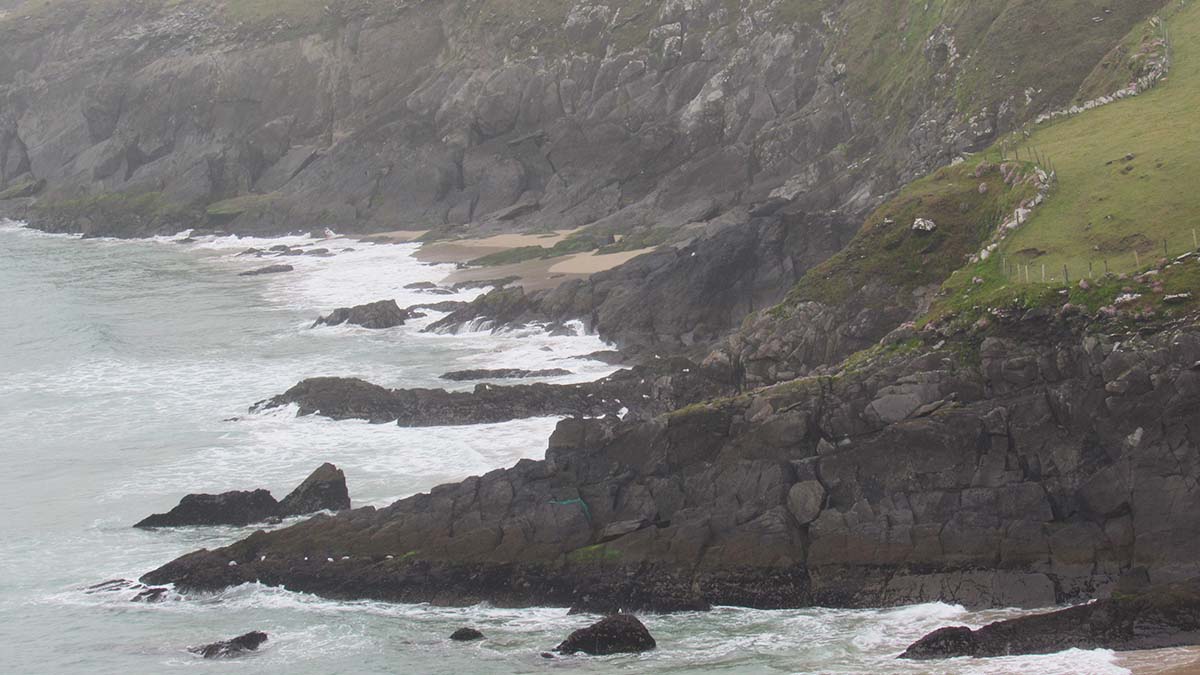 The chilly Atlantic pushed our ferry off the coast of Ireland towards the rocky Aran Islands in the distance, each wave colored a blue deeper than midnight. When we disembarked, the mist creeping down the rocky bluffs of the island and the sea spray caught in my hair. I had been in Ireland for over a week now, and for my first visit I had adjusted surprisingly well to the constant misting. Maybe it was growing up in the Houston, Texas humidity that had prepared me so well.

A lanky black and white border collie ran up the beach to greet us. Apparently, as the captain later told us, he waits there every day to greet the tourists. My fellow study abroad students played fetch with him for a bit with a piece of driftwood and I was reminded of my own border collie back home.

Then we all swarmed the small bicycle rental booth and were off. The hilly terrain and wet air tested our endurance, but not as much as the wind. As my classmates raced by, determined to beat each other around the island, I slowed my pace and soon was alone with the wind and the rocks. I walked beside my rental bike and pulled my raincoat’s hood up over my hair. The mist coming off of the sea gave my face a sloppy, wet kiss. Here on the craggy island of Inis Mór, everything seemed desolate. Desolate and beautiful. 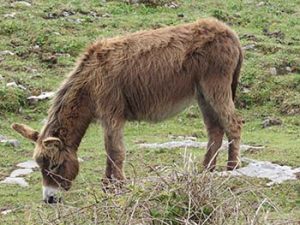 The gravel road that wound around the island was hemmed in with crooked walls of large stone coming up waist high. I had seen many stone houses and fences on my tour of the country. Everything seemed preserved just the way it was in the early 1900s. Donkeys still are used to farm since today’s technology-savvy vehicles still can’t cope with the harsh landscape. The houses are still built from stone with the occasional thatched roof, lending even more to the feeling of being stuck in history.

A shepherd with his sheepdog trotting at his side passed me on the road and gave me a smile. I waved back and he rounded the bend, disappearing from sight, and I had to wonder if he had even been there in the first place.

Around me, the coarse grass blew in the sea wind and looked a strange yellow under the gray-tinged sky. There were no sounds except for the empty wind and the crashing of waves far below. Even though the island seemed utterly abandoned at any brief moment, all I had to do was match the island’s slower pace and things began to come alive.

Squat, round bellied donkeys with shaggy hair covering up their eyes came quietly over to the stone fence. I patted one on the head and let it snuffle the air around me. Standing there with the wind and mist, I slowly began to realize why time seemed to move so slowly here.

There were no birds, trees, or transient flowers to alert me to the quick passing of time. Only hardy creatures endured here; island grass that looks withered year round, hardworking donkeys, and cold stone. I was the out of place one, a young traveler in my early twenties, a head of soft blonde hair, and a raincoat the color of spring roses. 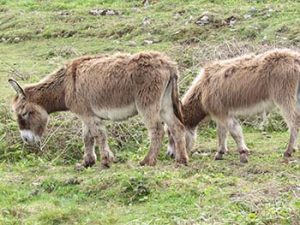 The donkey snuffled some more at me and his fellow came over to inspect the splash of color in their world of grays, greens, and browns.

I took up my bike and tried to ride it once more but the wind caused me to dismount after a few lengths down the road. As I walked into the wind, holding my bike with one hand and my hood on with the other, I could hear the grunts and snorts of seals on the rocky beach below. I propped my bike up against the stone wall and leaned over to look down from the outcropping.

A group of harbor seals, brown and gray in color, lounged on the rocks near the cold water like I would lounge at the pool. They looked up at me as I stood there shivering, staring back at them. One leaned its head back as if to sunbathe in the almost sunless sky, its body contorted around the narrow rocky ledge it was perched on. But the seal looked perfectly comfortable that way.

As they grunted to one another, I could imagine them discussing the waif of a girl leaning on the overhang to observe them. One of them had probably decided that if I should fall over, the seals closest should help me to shore.

I walked my bike around the loop, looking at the harsh silhouette of the island against the darkening sky. I felt as if I was in the presence of something very great and powerful. The strength of the stone walls lining my path, protecting me from the wildness that occasionally crept over the sides in the form of grasses and vines, had stood that way for centuries themselves. 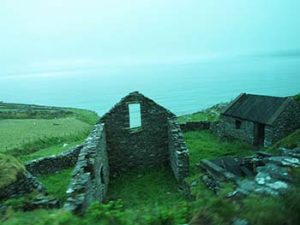 An abandoned farmhouse sat nestled back in a bluff. The four walls were still standing but the roof was missing. It had been a thatched roof and weaker than its stony counterparts. Things that are fragile and stamped with time can’t survive in this timeless land.

The wind bit my face and I could almost feel my skin growing taut and rough like the seaman’s who had helped us off the ferry when we first came over that day. The skin on his cheeks was ruddy and weather-beaten, his eyes glinting with the colors of the Atlantic sea that tries so very hard to overcome the stony outcropping the people called home.

My steps slowed and became heavier, more grounded. It was like my center of gravity had shifted, been pulled down to the sturdy stone beneath my feet. I mounted my bike and was able to pedal the rest of the way to the docks where our ferry would be leaving soon. The wind didn’t slow me as much as it did before and the donkeys only gave me an acknowledging glance instead of their usual concern.

When I came into town with my cheeks red and my hair tangled into knots that wound around my ears, I felt just a bit timeless myself. As if I could have been any creature that had made its way from the wilderness into civilization and survived the harshness of the landscape.

Once I returned my bike, I saw some of my friends from my study abroad group. We ducked out of the wind and mist to one of the few pubs on the island. There we warmed up and ate hamburgers while an old John Wayne western played on TV. It struck me as an odd thing to find something as American as hamburgers and John Wayne here in one of the most remote places I had ever visited. After we paid for our meal, we went out to meet the ferry once more, leaving two old Irishmen at the bar to finish watching the western. 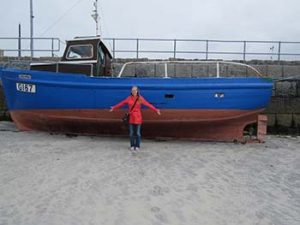 As I stepped onto the large boat that was to bring us back to the mainland, I couldn’t help but think how small it looked in comparison to the vast ocean and the white tipped waves. The boat pulled away from shore and I looked back at the wooden dock that jutted out into the churning waters. It was a dock that had survived, on a daily basis, extreme high and low tides. Upon arrival we had seen a sailboat sitting dry on the sand where we played with the dog. But now, it was already being buoyed slightly by the saltwater creeping up the shore. That old dock with its smoothed timbers seemed to me sturdier than the ferry built of plastic and metal carting us back.

The island grew farther and farther away and I looked after it as long as I could make it out. In a way, the island was like the fountain of eternal youth, but the fountain of eternal age. Everything was born old but never grew any older. Everything there only grew stronger, and hung around far longer than what the natural concept of time says about each thing having its own place and time to exist.

More on Inis Mór and the other Aran Islands as well as trip information if you’re wanting to visit:

The beautiful scenery and attractions on Inis Mór, like the spectacular cliffs and prehistoric sites:

The long history of the Aran Islands: 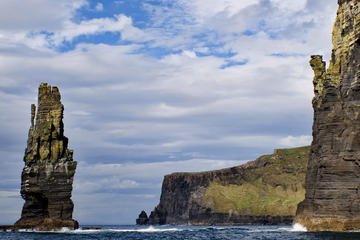 About the author:
Jessica Cook is an enthusiastic traveler with her latest journey being a trip to England and Ireland. She is a self-proclaimed history buff and loves traveling to places where the sights are great and the stories abound. Her usual writing fare is historical fiction, but she likes to dabble in travel writing and creative nonfiction. To learn more about Jessica and access her blog and published short stories, visit http://jessicawalkerauthor.weebly.com/