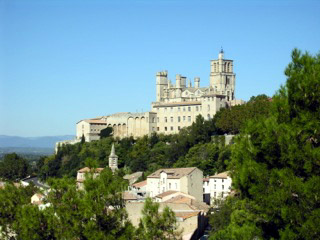 In beauty it rested atop the city’s crown, heralding its importance; a hand aspiring to Heaven even as its roots had known Hell. Sparkling in its day, dark within its night.

The basilica of Saint-Nazaire-et-Saint Celse has owned the crest above the city of Beziers, southern France, since pre medieval times. It has graphically revealed the greatness and baseness of mankind with lessons never to be forgotten, or at the least forgotten at our peril. A reminder of why historical knowledge is important. 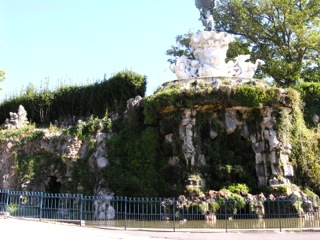 Beziers is ancient. It has been settled since neolithic times, predating the arrival even of the wide ranging Celts. The Phoenicians are credited as being the first settlers and the city itself takes its inception as 575 BC, only 25 years younger than ancient Marseille. The Romans re founded the city in 36 or 35 BC as a settlement for retired veterans renaming it Colonia Julia Baeterrae Septimanorum. Even the Islamic Moors had a short reign as rulers here from 720 to 752.

Yet its greatest fame, or rather infamy, came on July 21, 1209 when a travesty transpired which should never be forgotten for what it reveals of the extremes of intolerance. The massacre of Beziers during the Albigensian Crusade still echoes.

We churned into the city by rail and began our climb to the city’s crown and its most outstanding edifice; one visible as a royal tiara for miles about.

Directly across from the station we discovered the park Plateau des Poetes with its tended trails and lawns adorned with fountains. Pools, statues, observation venues and busts of famed writers dotted the park and its shady lanes providing respite from an intense sun.

Above the park stretched the Allee Paul Riquet with the centre of its long boulevard given over to pedestrian traffic and accordingly populated with kiosks, cafe’s and fountains all under sprawling deciduous trees. It was possible to walk free of traffic from the train station to the distant end of Allee Paul Riquet, a not insignificant distant.

Of note, Mssr. Riquet was a favoured local who was the architect of the southern portion of the extensive Canal de Midi connecting Toulouse, deep in the interior, with the Mediterranean, not an inconsiderable feat. 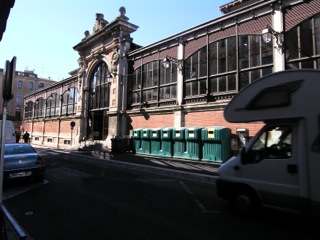 With difficulty, amid the winding streets of the old city where we actually came upon a sign pointing in two separate directions to the cathedral, we eventually found ourselves in a shaded square staring high up at the steeple of Saint Nazaire. To say it is awe inspiring is saying the least. It oozed poignancy; I half expected the stone to speak or ghosts to stare down from its heights.

The original cathedral was built in 1130 and was reputed to be a monumental edifice even by international European standards. It was to last but a short time and the creation before us was to later rise upon its charred bones. 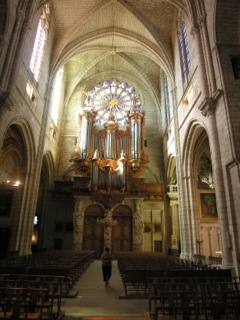 The Albigensian Crusade was initiated by Pope Innocent III, a most ironic title at best, in 1208, against a growing religious splinter group known as the Cathars ( from the Greek Katharos meaning pure). The crusade was to persist until the last of the Cathar “parfaits” was burned at the stake in 1321. What the crusade missed the Inquisition finished. The Cathars, who have been referred to as the Buddhists of Christianity, held there were two gods at play in the world and the world of man was created by the evil god, the satanic god, and the only way to escape was to live a pure life and after several incarnations one would exit the vicious cycle. As part of the purity were such requirements as vegetarianism and celibacy. Of highest esteem were the “parfaits”, those who were most achieved in their quest for heaven. 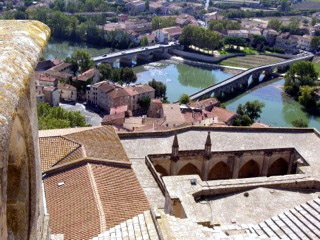 On July 21, 1209 the crusaders appeared at the doorstep of the city and sent word the Catholics could leave and be spared the fate of the resident Cathars. In a remarkable display of loyalty the Catholics chose to stay with their friends and neighbours. The forces of the Crusaders quickly overran the defences and fell upon the inhabitants like wolves. None, neither man woman nor child, Catholic or Cathar, were spared.

It is said some 6,000 sought sanctuary in the magnificent cathedral. It did not save them as it was put to the torch and they died amid its collapsing walls. The town was utterly destroyed and it is said its entire population of 20,000 were put to death.

The image was hard to dislodge as we walked about the present day cathedral, its magnificent architecture and art work manifesting man’s creative capacity even as the pall of his bestiality hung forever about the place. Climbing the narrow winding staircase to the tower provided an inspiring view of city and countryside; the River Orb sweeping through the city. Certainly 800 years ago the defenders of Beziers must have looked out similarly and seen the advance of their doom. The wind whipped round us like an endless dulled scream. 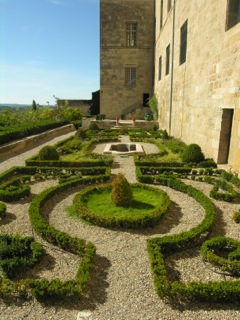 Clambering down we emerged at the square below the heavenly directed spire. An emblazoned plaque sits as a silent reminder of the dark deeds of so many years ago. To be remembered. That is good.

Wending our way back down the winding old streets the poignancy of the cathedral diminished and the Sun tossed its light in long tongues along the walls above. The echoes of voices and cars running about their own business. Life returned to Beziers, slowly, and the new cathedral began rising upon the memory of the old one, the bones of victims most assuredly dotted about as grim reminders. 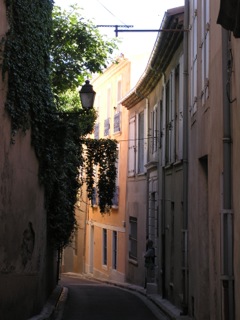 The cheery pedestrian ways, squares and cafe’s brought us back to the present and the witnessing of the fact life goes on. And under the Sun of southern France colour and liveliness are even more rampant. Beziers is like its urban kin throughout southern France. It is beautiful and a treat to explore.

Sitting down to a coffee and watching the world go by, ideally with the strains of a violin or accordion filling your ears was like watching a movie.

Just as mankind is able to commit atrocities such as what happened in Beziers he is capable of loyalty, like the Catholics who stayed with their friends and neighbours, creativity and the ability to rebuild.

What he must never do is forget. He must never forget where intolerance can lead nor should he ever let the voices of the intolerant rule. 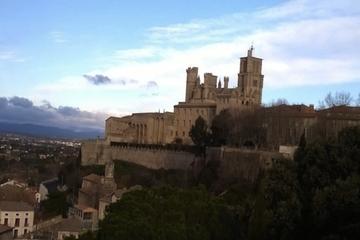