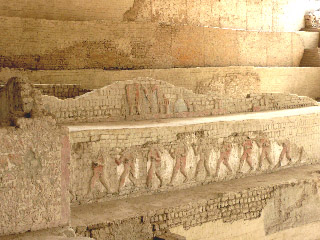 The early morning sun splashed gold across the sands of the Moche River valley. Only appropriate, for this is the center of the Moche, Mochica and Chimu civilizations; cultures renowned for their work in gold and silver, as well as remarkable pottery.

We had left Trujillo, capital of the region of La Libertad and the third largest city in Peru, at 6 in the morning; before the face of the Moche fire god, Aja-Paec, sent his burning rays to scorch this desert on the northern coast of Peru, some 561 km (349 miles) from the capitol Lima.

Trujillo is regarded as “The Capital of Eternal Spring” because of the year-round pleasant climate, but in the sandy barrens outside the city, bordering the Pacific, temperatures can reach 40 degrees centigrade (104 F) by noon.

I had come to Peru to experience the northern coastal areas for the first time. My travels to the other regions over the years were, in the final analysis, great adventures, but the excitement of discovery was muted by the sense that everything of any consequence had been excavated and housed in museums.

The northern coastal areas remained, by contrast, relatively untouched. Any real excavations began in 1995 when the government began to provide security for the sites, and to stem the tide of stolen artifacts being traded on the black markets of the world. But, the digs did not really begin in earnest until 2001.

Now, more than ten years later, many incredible discoveries have been made and much more is known about the mysterious Moche, Mochicas, Chimu, and Wari cultures. It is estimated, nonetheless, that only 10% of the ruins, temples and pyramids have been explored.

Even over that short span of time sites such as the Sipan Sanctuary and the tomb of the Lord of Sipan – considered to be a more important find than Tutankhamun’s tomb; Chan Chan, the largest mud brick city in the world; and Batan Grande – the location of the resplendent tomb of the Lord of Sican – are well known throughout the world of archeology. 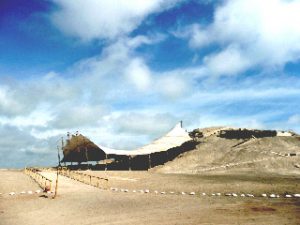 My destination today, however, is much less well known, and, to me, much more exciting. Peruvian archeologists have discovered – at a ceremonial site called El Brujo, or the Wizard – the most exquisitely preserved mummy ever found from the Moche culture.

Deep within a crumbling mud brick pyramid called Huaca Cao Viejo, beneath meters of adobe brick an amazing tomb was uncovered. Because of the dry, desert conditions the entire site and the mummy are in an exceptionally good state.

As our car turned off the two lane blacktop road onto a deeply rutted, rocky path through the vast, deep green sugar cane fields, we passed a tiny, hand-painted sign pointing to “Señora de Cao.”

On the far horizon, bordering the Pacific, I could make out the archeological complex of El Brujo, including the prehistoric Prieta Pyramid that belonged to the first agriculturists, and the White Pyramid, now known as Cao Viejo.

My guide, Jose Ocas Cuenca, was part of the Harvard archeological team that first unearthed Chan Chan. His expertise, amassed over a lifetime of exploration, and his deep passion for the history of his heritage, have swept me from site to site on a wave of enthusiasm.

Jose had already taken me through the expanse of Chan Chan; announcing our arrival by blowing into the conch shell he carries with him – the sound echoing off the distant mud brick walls of the massive plaza.

For hours he led me through the mazes of this enormous city, wearing his traditional Peruvian straw hat and playing ancient Chimu tunes – taken from their pottery – on a flute he had carved from bone, stopping only to point out important features and explain their significance.

He explained that only a small part of Chan Chan had been excavated. He turned to me, with a smile creasing his sun-cured features and said, “This never gets old. The mystery never ends, but we find out more each day; and each day the story grows.”

I had studied the site we were about to visit today to learn more of the amazing discovery of a mummy in 2006. A find so spectacular and important that the news of it’s discovery made headlines in the world’s press, and the front cover of National Geographic Magazine.

The 1,600 year old mummy was elaborately wrapped in an enormous, gold encrusted bundle, surrounded by precious adornments and exquisite, intricate gold jewelry; and, with all the trappings of a powerful, supreme ruler and warrior; including two long, massive, gold covered war clubs and 23 spear throwers. A bowl of solid gold covered the face

Most astounding of all – this is the mummy of a woman. This tomb has been the sacrificial resting place of Señora de Cao since 450 AD.

Never before in the Moche culture has a woman been discovered, entombed in such extreme, exalted ritual, and surrounded by the trappings of such elite status. 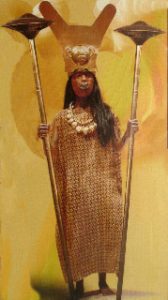 Once the hundreds of yards of cotton cloth had been painstakingly unwrapped, and the scores of tributes and ornaments set aside, her incredibly well preserved body was found to be covered with red pigment and exotic and elaborate tattoos. Nothing comparable to this has ever been seen in the Moche culture.

The tattoos include a spider – covering her back – geometric designs, and images of mystical animals on her arms, legs and feet. Her long braided hair still flows over her shoulders.

I had seen the dramatic pictures of her, and now, I was to see the tomb of Señora de Cao, resting high atop the pyramid Huaca Cao Viejo.

The dig site is protected by a guard barracks and administrative center at the base of the pyramid. Our documents were checked by the head security officer, an unusually tall and stern faced Peruvian, with an impressive looking firearm strapped to his uniform, and we were allowed to begin to climb.

At the first level of the pyramid – under the protective cover of a huge tent because the entire site is still being excavated – there is a large ceremonial plaza. It’s main facade and inner walls are covered with colorful mural ornamentations in high relief decoration.

They depict ceremonial dancers, holding hands along the length of the walls, and, more disturbingly, naked, bloodied prisoners roped together by the neck, being led to their sacrifice. The figures stand 4 meters high (12 feet) and the original pigments are still vibrant.

Climbing up the ramp to the top of the highest plateau reveals another ceremonial patio. The walls are filled with images and what appears to be a complex calendar. And, protecting the tomb, a figure never seen before in Moche art. Depicted in eight different versions, in square panels, in brilliant colors and detail are the frightening, life size images of “Decapitador Mochica”.

It’s teeth are fanged, like a cats; it’s extremities are flexed like a reptile. In the right hand it holds a sharp edged scepter, and in the left, a human head, grasped by it’s hair.

Covering the other walls were ritual battle scenes, warriors, a human sacrifice scene and stylized geometeric images of fish.

On the floor of the patio is the opened tomb of Señora de Cao. Looking down into it I saw the reconstructed representation of her mummy, the artifacts, and also the body of a 20 year old woman. The young woman had been ritually strangled with a length of rope to accompany and serve the Señora in her afterlife. 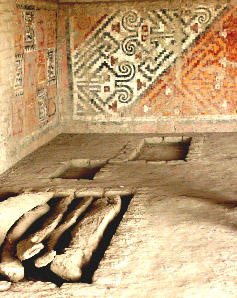 The actual mummy has been removed and awaits installation in the museum being constructed at the base of the pyramid; along with all the artifacts found with her. It will be completed in July of this year.

Several facts have been deduced since the discovery. Forensic tests show she was 4 feet 5 inches tall, 25 years old, and had given birth to at least one child. Given that the Moche reached their 60’s and 70’s, this is quite young. The cause of her death is still unknown.

The tattoos were achieved by use of pigments such as charcoal, inserted beneath the skin by cactus spine. She had an abscessed wisdom tooth that must have been very painful.

Strands of beads, loaded with symbolic meanings – not entirely understood – encircled her neck. Fifteen necklaces in all have been reconstructed, skillfully crafted from lapis lazuli, quartz, silver and gold. They attest to the elite position she held.

All the evidence adds-up to the conclusion that this was a person of enormous power, ranging from the battlefield, to the administration centers, to the temples of worship and sacrifice. The fact that she was a woman and that she represents an unprecedented figure in Moche history remains unexplained.

My guide, Jose, who for this first time during my trip had fallen silent in the presence of the Señora, told me earlier that only 10% of the sites have been explored. The answer to the mystery of the mummy is still part of that 90% that remains.

Does the discovery of Señora de Cao signal that the next Agrippina, Zenobia, Dido or Hatshepsut has been found – expanding the ancient pantheon of powerful, warrior Queens? Only science, further excavation and time will tell.

I will return to Peru and the North again to learn more of the culture and history. I can only hope that by then more will be known about the Señora de Cao. Until that time, the words of my guide will stay with me, “This never gets old. The mystery never ends, but we find out more each day; and each day the story grows.” 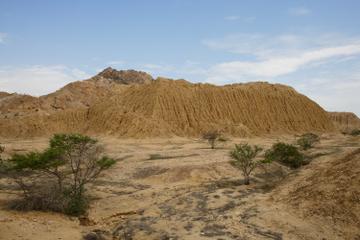 Chiclayo, Peru is located about 200 kilometers north of Trujillo.  It is a gateway to Huaca Rajada, discovery place of the tomb of the Lord of Sipán, and the Tombs of Sipán Museum in Lambayeque, where you can see artifacts found in the tombs.

About the author:
Cornelius Myers is not only a travel journalist, broadcaster, and feature writer, he also does voice overs, narrations, documentaries, and produced Industrials and Audio Books. He is an award winning member of the National Association of Travel Journalists of America (NATJA), Monaco Press, American Federation of Radio and Television Artists (AFTRA) and Screen Actors Guild (SAG) and The American Recording Academy (GRAMMY). He’s been published in The New York Times, New Riviera Magazine, Monaco Madame, Connection Magazine, Tendance, LRM Magazine (Miami), The Miami Art Guide, Boomer Times and The Riviera Times and has been a talk show Host on the ABC and NBC National Networks; news anchor Channel 11 WPIX, New York; broadcaster on WMCA, WCBS, WOR, New York. Program Director, Riviera Radio, Monaco. He is based In Miami and Monaco.
Contact: cmyers444@bellsouth.net or myers@wanadoo.fr

Photographs:
All photos are by Cornelius Myers.