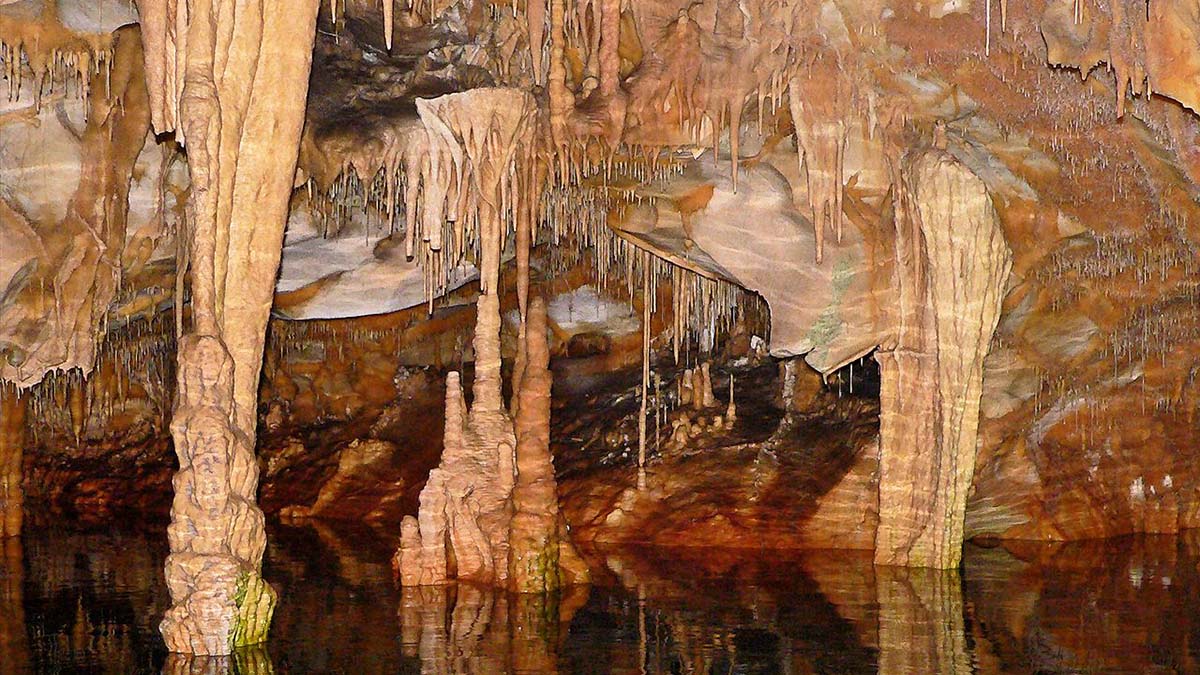 It’s as though I have entered a vast underground cathedral, perhaps one created by Gaudi, because of the way the vaulted ceilings drip with wax-like stalactites. Everything is diffused with colour, as if light has filtered through stained glass windows. The only sound is the soft dipping of the boatman’s paddle and the hollow echo of voices. 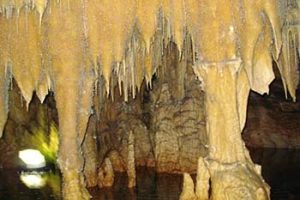 I am inside the Diros Caves located in the Bay of Diros on the western coast of the Lakonian peninsula of the Mani in the southern Peloponnese of Greece. The twenty-five minute tour is 1500 metres underground, the first part by punt on an underwater lake, and later by foot. The Caves are among of the largest in the world, an underground wonderland.

The cave was formed thousands of years ago. The stalactites and stalagmites now beneath the water were formed when the sea level was much lower. The cave has been known to locals since about 1900 but was not opened to visitors until 1967. Explorations continue including cave diving to explore under water.

Temperatures inside the caves range from 16C to 20C and it’s a refreshing respite from the heat of the July morning. I have entered through the narrow passageway to the underground lake and got fitted with a life jacket before boarding the little punt that takes me and other tourists on our magical journey. 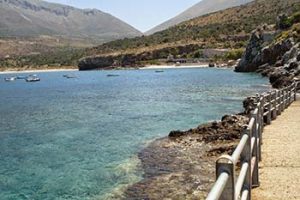 The first cave is known as the Glifada Cave, one of the most beautiful lakes caves in the world. Brilliant white stalactites and stalagmites glitter from the ceiling and rise from the water like crystal drapes. Water seeps into the cracks of limestone and drips into the underground lake, making a pleasant trickling sound. The passages are sometimes so low and narrow we have to duck our heads as the punt slides underneath and we enter another breathtaking cavern. The boatman tells us to keep our hands inside and not to touch anything in the caves. 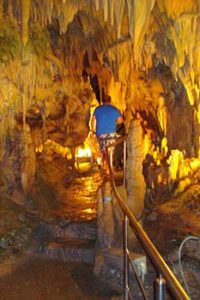 Significant anthropological findings from the Neolithic age have been discovered here including pottery, providing evidence of prehistoric men. Fossilized bones of panthers, hyenas, lions, deer, ferrets and the largest collection of hippopotamus bones in Europe have also been found in the caves.

At the end of the boat ride, we enter the vast cavern of the Aleopotripa Cave. I can’t help but gasp at the sight as it is like a vaulted Gothic apse and evokes a feeling of awe. As I walk through with the other tourists, we are warned not to break off any of the stalactites. This is the cave where the evidence of prehistoric men was found and at the exit there is a small Stone Age museum containing the artifacts, which date back 6000 years.

The Diros Caves are protected by the Greek National Tourist Organization and are an integral and significant part of the Greek cultural heritage. They are among the most important natural sites in Greece. I hadn’t expected to visit them when I traveled to the Mani so that day was a special bonus and one that I’ll never forget!

You can take a bus, or drive via Sparti from Gythion in the south Peloponnese. The Caves are an hour drive from Gythion.

About the author:
Ruth is a travel journalist and historical writer who spends most of her vacations in Greece. She instructs workshops on travel writing and encourages new writings to submit to the travel ‘zine TRAVEL THRU HISTORY. Ruth has a travel guide to Athens available on Kindle, Athens & Beyond

available from Amazon.com or the Book Depository.