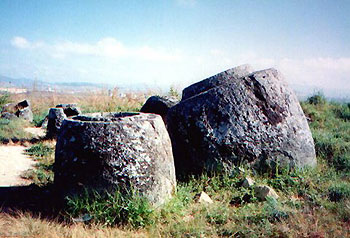 The tiny Lao Aviation plane dropped hastily from the sky. Crossing my fingers I cursed my sense of adventure. What on Earth had persuaded me to risk flying to Phonsavan? The reason was, of course, the famous ‘Plain of Jars’. These ancient stone vessels lay scattered across the far-flung Lao province, and according to the travel books, have become something of a tourist magnet. I was looking forward to some hardcore sightseeing.

But Phonsavan has more sinister mysteries lying on its mountains than Neolithic jars. Acres of grassland appeared below, pockmarked with craters like a lunar landscape, the tragic scars of the Vietnam War. These craters, as I was to learn, were the least of our problems.

From the shack-sized, dusty airport, I hopped in a tuk-tuk into Phonsavan, an ugly concrete town surrounded by bleak barren slopes. These I figured, were probably caused by the Agent Orange dropped on Laos during the Vietnam War. 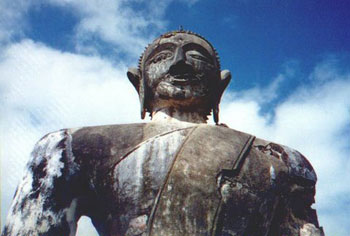 I booked into a cabin at a reasonably clean home-stay and deciding to leave the Jars till the next day, set out to explore the humble streets. Drifting into a cheap café for lunch, I chanced upon a middle-aged Brit we’ll call Basil. He was a handsome older fellow with an air of action about him. Nevertheless poor Basil was desperate for conversation and fell upon me, inviting me to join his table. Weary from a week full of shenanigans in Vientiane I was not overly pleased. However it would have been unspeakably churlish to decline. Over a couple of Beer Laos and a bowl of steamy noodles he told me his story.

Basil was a bomb disposal expert. Oh yes, the stuff of heroes! Following a distinguished career with the British Army, he had taken early retirement. Eager to make the world a better place, he volunteered for the UN bomb disposal project, and they flew him straight to Phonsavan. Basil, who had never been to Asia, now found himself in one of the most inaccessible slices of the continent. Bleak mountains surrounded him to all points of the compass. As there were no safe roads the only way in or out was by plane. There were no other expats to befriend. Basil was suffering massive culture shock, and I did my best to empathize.

He talked about the culture of ‘take it easy’, (or baw pen yan as the Laos say). Never do today what you can put off till tomorrow. Which is not as odd as it sounds in the heat and humidity of South East Asia.

“Some days I turn up for work and my trainees have forgotten to fill the Jeep with petrol! They tell me to take the day off! How can they forget something as crucial as petrol?” he bemoaned.

But it was a lot more serious than that. Basil told me there were enough unexploded bombs left over from the War in this province to keep him busy for another 500 years; pineapples, daisy-cutters, bomblets, the whole deadly assortment. Only the day before, he’d found two live missiles underneath a busy children’s classroom. Later in my tour I would see Hmong habitations that were built from discharged shell casings. 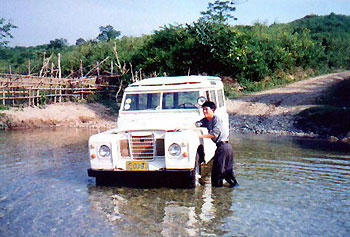 The focus of Basil’s job was to train up local lads to be defusers themselves. They were brave, good-hearted souls, but so gung-ho to get stuck in he feared for their lives.

Suddenly we were interrupted. A man I recognized from the plane strolled in looking for Basil.

“He’s very high up in the government,” my newfound friend whispered in my ear. That would explain the leather jacket, a pricey item in a country that can’t afford roads. Basil, clearly a man of action, was none too happy to see the politician. He invited me to dine with them that evening, to help smooth over any embarrassing silences. Although I was not keen myself to get drawn in, it seemed discourteous to turn down his request…

The dusk reunited the three of us in a cheap noodle shop. Overhead dark peaks were swallowing the sun in an orgy of red and orange. Phonsavan, with its elevation above sea level, was less hot than you’d expect and a chill began to creep down from the mountains. Weary, weather-beaten peasants trudged home, returning from whatever it was they did all day. Nightfall in the tropics has a mysterious and seductive feel. It becomes easy to believe in ghosts. Quietly I slurped up my pork ball noodles, enjoying that seduction, while Basil and the bureaucrat exchanged manly, beery banter.

As it happens, Phonsavan only gets four hours of electricity a day, from 6pm till 10pm. Sure enough, come the hour, the light bulbs dimmed and died, as lanterns lit up throughout the town. No longer able to see their beer, Basil and his superior decided to shoot off to a second venue and Basil pleaded with me to go along as the icebreaker. 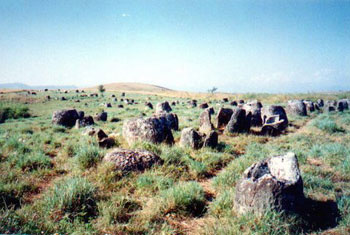 So there I was, sat in the Unexploded Bomb Land Rover, speeding out into the dark deserted moors. All around was nothing but black fields and bombs. On we drove, up and down, over hills and through vales. Then abruptly … there it was!

Magically, from nowhere, before my astonished eyes appeared … a disco, ablaze with fairy lights. Had I stumbled into Never- Never Land? A few miles away the country folk of Phonsavan were climbing into their hard paupers’ beds with nothing to light the way but candles. Was the town’s electric supply switched off so that government officials, drug-runners and other nogoodniks could boogie?

The interior was a Spartan, beer-sodden hall. A few depressed-looking waitresses half-heartedly danced the lam yai. Dangerous-looking individuals swigged beer, guns poking from their jackets. Our politician offered me my choice of waitress, but I politely declined. I kept my mouth shut and my eyes firmly on my beer. This joint had all the charm of a Wild West saloon on the brink of a shootout. Not to mention the sea of bombs outside. Walk fifty paces in any direction and …. BOOM!

I must confess to a blend of curiosity and fear. The former because this was such an unlikely place for little old western me to find himself. We were a very, very, very long way off the tourist trail. The latter due to ticking time bomb of tension I sensed in the air. After all, alcohol and guns really don’t mix.

Luckily, both Basil and I kept our heads down and this seemed to avoid trouble. The government officer was obviously hoping for a riotous night of beer and girls, and I guess I must have been a disappointment to him. He spoke scant English, but my overall impression was not one of a man of integrity. Eventually we made our excuses and left, leaving the man from the ministry happily ogling the dancing girls.

So there you are. Even in the mountains of Laos there’s always somewhere to party, if you know the right people. 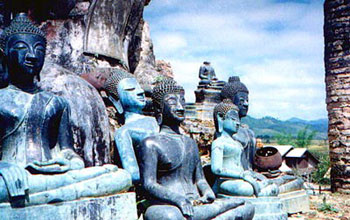 As we motored back to Phonsavan’s version of civilization, I pondered my companion. It’s true to say that left-wing liberals like me find it difficult to bond with macho army types like Basil. On the other hand, his sacrifice of time and safety to the people of Laos deserved nothing but awe and admiration. I had come to respect him, despite his problems in adjusting to local customs. Usually I can’t stand westerners who come out to Asia and whinge. As a famous Catholic missionary in Bangkok once told me: shut up or ship out. Perhaps my encounter with Basil taught me to be less fussy.

Basil was a definitive action man, a hero dedicated to beer and bombs. I wondered which of the two gave him the most satisfaction out here in this lonely outpost of humanity. Sadly, only the bombs will never run out.

Some time after midnight, Basil dropped me outside my slumbering guesthouse. Above us the stars, unsullied by city lights, shone in great fuzzy sparkles of silver. Basil roared off, no doubt mindful of the coming day, risking life and limb yet again. He left me choking on his dust. 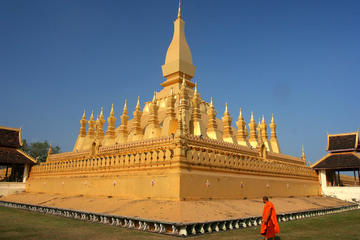 About the author:
After a London childhood Ian moved to Nottingham where he worked with children with learning disabilities. He went onto teach in the East Asia for many years. More recently he returned to Nottingham to study a MA in Creative Writing. His first novel is due out in Autumn 2011. Ian has published over 150 articles and visited 36 countries. He and his family visit East Asia regularly. www.iandouglas-writer.co.uk

All photographs are by Ian Douglas.