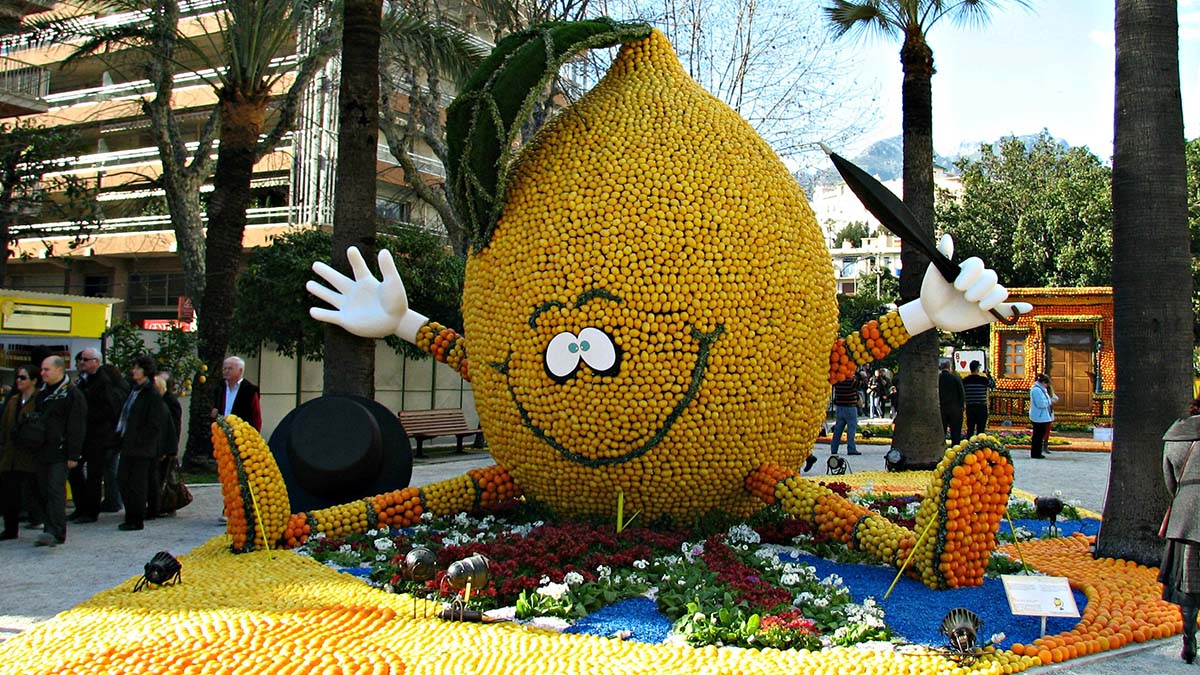 Located in the South of France with a picture-perfect medieval old town, belle epoque villas, and a yearly average of 316 days of sunshine, it is easy to see why the seafront town of Menton is called the Pearl of France. It has also earned the title of the Lemon Festival Capital of the World. Every February when it hosts the Fete du Citron it becomes apparent why Menton has kept this well bestowed title for 84 years.

The festival initially started as an exhibition of lemons, oranges and flowers and quickly grew into what it is today…the World’s largest event celebrating citrus. The festival itself is held for approximately 19 days and coincides with the Carnaval in Nice. Menton is a mellow town but during the festival it is bustling with the 240,000 people which are there to experience the town and the festival. Located 20km from Nice, 1.5km from the Italian border it offers the best of both countries…food and ambiance. 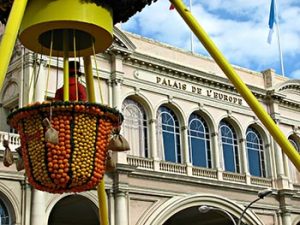 There is a theme each year and the giant citrus covered displays as well as the floats reflect the theme. I attended ‘Around the World in Eighty Days (with a Secret stopover in Menton)’. The Fete du Citron was celebrating its 80th Anniversary and it was tied into the 140th Birthday of the author Jules Verne.

In the book, the Englishman Phileas Fogg accepts a wager that he and his valet can make it around the world in eighty days. They travel by exotic and traditional means making several stops along the way in an effort to win the bet. 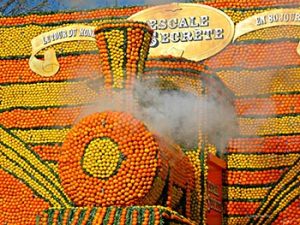 The story was translated into life size displays which were decorated with lemons and oranges. Every display had sound. The Pacific Railroad, hot air balloon and elephant were just a few modes of transportation. Walking through the festival was like walking through a living book.

The displays are erected in Les Jardins Bioves with its pea gravel walkways and gardens flanked by palm trees. It takes thousands of hours to put the festival together as it also has many citrus covered parade floats. 145 tons of oranges and lemons are used. The smell of citrus floats through the town. Approximately 15 tons of metal is used to create the moving floats and stationary displays which are then covered with metal netting.

The fruit is attached to the netting by elastic bands and is checked daily to make sure it looks perfect. If necessary, replacements are close at hand. The displays are lit at night and worth a second look if you have visited during the day. 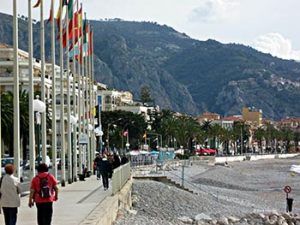 The Promenade du Soleil is the location for the Golden Fruit Parade. This is held every Sunday afternoon during the festival with the night parade on Thursday evenings. Excitement fills the air along with lively music, and energetic dancers, as the floats roll along the seafront. Fireworks add to the excitement.

Reserve some time to explore Menton. The old city and port will take you back in time. From the 1600’s, the gently colored Saint-Michel Archange Basilica on Parvis Saint-Michel will leave you in awe. You can’t miss seeing the belle epoque villas and lush gardens as they are scattered everywhere. Rue Saint Michel the lively pedestrian street offers numerous spots to enjoy a drink, meal, shop or just to people watch.

Menton Tourist Office, 8 Avenue Boyer, Palais de l’ Europe. 00 33 4 92 41 76 76. It is located across the street from Les Jardins Bioves. Ask for a map of the city which is free and will come in handy if you decide to explore the town.

Tickets – These can be purchased at the Tourist office. Tickets for the Citrus displays in Les Jardin Bioves are €10 for adults, €6 for ages 6-14. Children under 6 and those with mobility problems are free.

Arts and Crafts Show – FREE in the Palais de l’ Europe. This features local artisans and is the perfect place to pick up a souvenir or two. 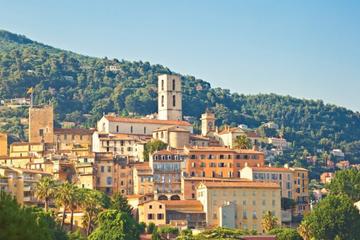 About the author:
Barb Harmon’s love affair with travel began in high school as an exchange student in The Netherlands and continues to this day decades later. As empty nesters, she and her husband travel as often as possible looking for the next adventure. She is a member of The International Travel Writers and Photographers Alliance. You can visit her blog at: www.chasingthenextchapter.com