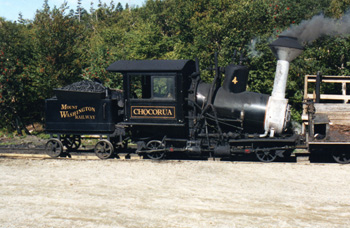 Nose pointed steeply groundward, it looked more like a Disney creation than a serious train engine. Looks can be so deceiving.

Since 1869 this powerful little steam engine and its kin have been pushing tourists three miles up to the wind-blown summit of Mount Washington, New Hampshire and easing them back again. Mount Washington’s head soars above all of the other peaks of the Presidents Range in the White Mountains and at 6228 feet is the highest summit in New England. At its crown demon winds howl unfettered, peeling tears from eyes better than cut onions. A fair price though for a glimpse of the spectacular. On a clear day you can see four states with a view limited only by the curvature of the earth.

Far below, the cog Railway station is crowded with the next set of sightseers, us included, waiting to board the period coach and slowly crawl up the steep pitch to the mountain’s long, exposed, spine. But first we have to wait for the last train to click its way home to the station, disgorge its enthused human cargo and give its engine a long drink of water before the next assault. 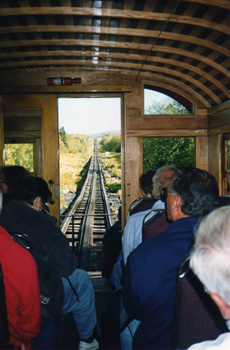 Crowding into our seats, old wooden benches polished and stained as if new, we wait for the jolt of the engine rejoining us. There are no CDs or TV screens to entertain us on the long haul but we have our tour group leader, brakeman and jack-of-all-trades, John, to keep us informed over the course of the 2.5 hour round trip.

The long commentary on the history of the railway and sites along the way is injected with wit, humour and enthusiasm keeping us all laughing appreciatively. Originally called ‘Agiocochock’ by the Native Americans the mountain was considered the home of the Great Spirit and was, reputedly, not climbed. Darby Field, in 1642, became the first known person to reach the summit and in 1818 a walking trail was blazed to the top to be joined in 1861 by a wagon road. When Sylvester Marsh petitioned the New Hampshire government for the right to build a railroad to the peak they laughed but granted him a permit to construct his ‘ railway to the moon’. One hundred and fifty one years later he is still enjoying the last laugh.

With a deep thump of the engine, a blast of the whistle and a puff of steam we lurch forward and up. The incline steadily steepens until the front end of the coach, at one point, stands fourteen feet higher than the back and the only way to stand is a comedic Charlie Chaplin pose leaning as steeply forward as possible. 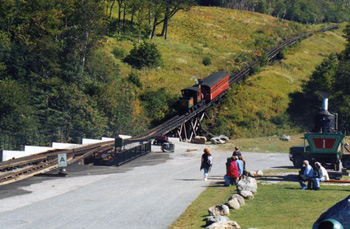 Up from the full forests of the valley through increasingly stunted and twisted growth and into the struggling bushes of the broad mountain slope we rise. The engine chugs behind us eating coal and spitting black smoke in a long trail; straining to reach the next water stop. That pause gives us a chance to regard an old shed clinging to the mountain at a severe angle or so it seems. In fact the shed is perfectly horizontal, it is us who are off kilter.

The thirsty engine satisfied we grind on with our journey and leave the last remnants of vegetation behind. Clambering the ridge the engine belches its smoky signature in a plume visible miles away on cruise boats plying the waters of Lake Winnipasauke. The other peaks of the President Range emerge beyond the barren rocky girdle of Mount Washington. Rock cairns parade close along a well worn hiking trail. More than a curiosity their visibility becomes critical when the clouds and mist roll in to rob trekkers of vision. 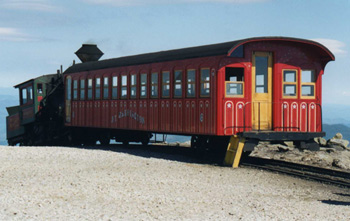 The summit rises temptingly before us but again we pause, this time for another engine easing its coach back down to the distant valley. As seems so natural its passengers wave to us and us to them, a shared commonality in the experience. Trust in the engine is tested as we back off our siding to resume the climb. The comforting forward pitch sets us back on course.

A haunting marker gives silent remembrance to the death of a young lady, many years before, tragically within sight of the summit’s haven. The barren scene is now guarded by the looming visitors’ centre spread atop the summit like a giant squat spider.

When at last we grind to a halt at the top we are greeted by a blast of wind turning the coolness to cold. Most scurry to sheltered viewpoints and the gift shop while a few of us climb higher to take in the 360 degree sweeping horizon. The wind wails, determined to drive us away. Anything remotely loose is torn off or flaps wildly but what a view. Mountains, green clad or rocky, roll to eternity. We touch the open sky and feel its breath. We have 20 minutes to visit the heavens. It hardly seems enough.

We are joined by those who hiked the long way up or have driven the steep roadway to the top. The hikers earned my respect. 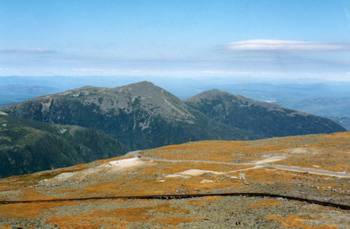 This summit is visited by a quarter million people a year and is seen by many in regular New England weather reports. Here winds have reached 231 miles an hour and the temperature dropped to -47 minus the wind factor. This September day was good with winds at 37 mph, gusting to 75. In winter it is a frost covered fairy land.

Eventually we joined the others in the blissfully windless world of the summit centre with its panoramic views.

The wind-blown line to reboard is patiently waiting when John appears. The steady descent seems quicker but the thought of the engine acting as a brake and the cog railway technology ensuring safety gives us all an appreciation for the creators of this remarkable little railway.

Walking back to our car in the warm sunlight we leave the little engines behind. Each season they return. Each season as the world changes, as the crews change and the mountain ignores it all. A credit to human engineering the railway to the moon just keeps on rolling. 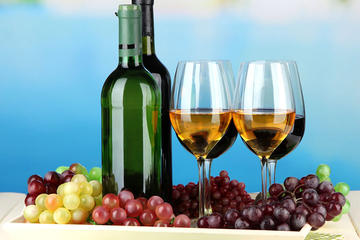 Located two and half hours driving from Boston and three from Montreal, Mt. Washington is located in the heart of the White Mountains. Here it is easy to fill a week with excursions to state parks, exploring caves, riding trams to mountain tops, trekking to waterfalls, taking in the Fall colours and experiencing a rich and varied history long pre-dating the arrival of the Europeans. And that is independent of the area’s reputation as a winter skiing playground.

♦ www.thecog.com – for an updated calendar and ticket price.
♦ www.visitnh.gov – website for the state
♦ www.visitwhitemountains.com – for information on things to do, calendars, places to stay and transportation in the White Mountains.