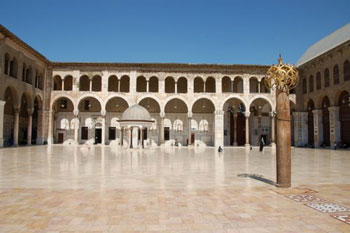 Many relics of the past hide in Damascus’s streets. Turn a corner here and you come across the ancient walls from which St Paul escaped from the Romans. Around another bend, you encounter an ancient Christian church or a roman column. In its time the city, one of the oldest in the world, has been a hub of trade, a Roman military base and a centre of Islam.

In the centre of the old town is the Umayyad mosque. Built fourteen centuries ago, the mosque is the most important Islamic structure in Syria and the third most important mosque in the Islamic world. It is also the latest in a sequence of religious buildings that have occupied the same sacred site continuously over a 3000 year period.

The site has played host to the temple of an ancient Aramaean god, the Roman god Jupiter and a Christian cathedral. Although these ancient temples and churches no longer exist, elements of them survive in the mosque of today. 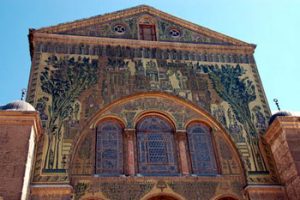 I reach the mosque through the network of narrow streets and alleys that make up Damascus’s old town. Dusty and perfumed with the fragrance of cooking meat, they are a hive of frenetic activity, especially around the souks which crowd about the mosque’s western entrance. The mosque shields itself from it all with high stone walls. Even from the outside, I am aware of a sense of removed, spiritual calm within.

The exact beginnings of the area as a sacred site are unknown. Its first identifiable building can be dated to the 9th century BC when a temple to the sky god Hadad Rimmon, a deity of the Aramaeans who ruled much of Syria until 700BC, was constructed. The only remains found by archaeologists were a Phoenician style relief of a winged sphinx under the eastern part of the mosque. Each subsequent power who ruled Damascus used the site to accommodate their particular deity or religion. The Roman’s rededicated the site to Jupiter and constructed a vast temple complex. In the fourth century AD, Jupiter’s temple was rededicated as a Christian site. A byzantine basilica was constructed. Later, the simple church became the cathedral of St John the Baptist, in honour of the remains of the saint which were housed in a specially constructed shrine.

After the Muslim invasion of 636AD, the cathedral became a shared site of worship. The eastern half of the basilica was utilized by the Muslim conquerors whilst the western half remained a Christian church. This arrangement continued for 70 years until the first Umayyad Caliph, Khaled Ibn Al Walid decided in 705AD to build a mosque on the site unequalled anywhere else in the Islamic world. 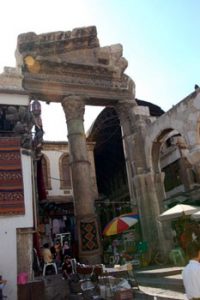 As I make my way to the ticket office of the mosque, I pass some of the visible remains of the sacred precinct of the temple of Jupiter. In its day, this temple was probably the most magnificent edifice in the site’s history. Measuring 385 metres by 305 metres with a square tower at each corner, the temple itself occupied the area of the present day mosque. Its sacred precinct reached far beyond, into the area now occupied by narrow streets.

What remains of the sacred precinct have been accorded little respect. Fractured archways stretch out from nowhere, crumbling away like decaying teeth. Many are graffiti smeared. A blackened, broken pediment from the remains of Jupiter’s western temple gate looks out sadly at the walls of the mosque, once the outer walls of its temple. Carpets hang from the remaining arches of one of its colonnades, now a place to display the wares of souk stall holders. Like the empire that built them, the remains of the temple have fallen.

Of the Christian cathedral and its basilica, nothing remains. It was completely demolished to make way for the creation of the mosque.

At the ticket office, non Muslims are inspected to ensure they are correctly dressed. The mosque has a strict dress code. Men must cover their arms and legs while women are only allowed to show the flesh of their face and hands. For them, trousers are not allowed. All around me are female western visitors who have donned strange black hooded robes provided by the mosque in order to conform. But forewarned is forearmed and I have managed to avoid this by assembling my own outfit of long skirt, light cardigan and headscarf that passes muster with the strict looking lady who inspects us before allowing us to proceed. 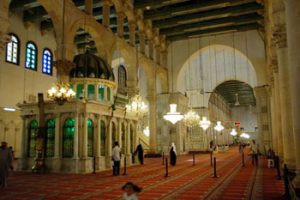 Although the mosque covers only a small portion of the former temple of Jupiter, what it lacks in size, it makes up for in opulence. It consists of a northern courtyard, the surface of which is polished to a mirror like smoothness. The courtyard is vast and overlooked by the Al Arous or bride’s minaret which is also an astronomical clock. It is largely empty but for an ablutions fountain in its centre and two domes, the dome of the treasury and the dome of the clocks, which at one time stored the mosque’s funds and timepieces.

On three sides of the courtyard runs a two story arcade. This blends into the mosque building itself. Inside, the mosque is divided into several halls. The prayer hall is by far the largest room but there are also two shrines, one to Al Hussein, the grandson of the prophet Mohamed and one to John the Baptist, known in Islam as the prophet Yehia.

Both inside and outside the mosque, the lower walls are faced with marble whilst the upper areas were once entirely covered with jewel like mosaic depictions in a style known as fusayfusa’a. Those examples remaining depict Damascus palaces and gardens using squares of highly coloured glass and gold and silver leaf.

Even the ceilings are vividly patterned. The Dome of the Eagle which dominates the centre of the prayer hall ceiling is painted in cool jades and gold leaf whilst elsewhere the ceiling patterns are rich dark reds, blues and greens that match the Arabian carpets underfoot. Rich stained glass patterns adorn the long, round windows. The result is an interior stained with shadows of cobalt blue, emerald green, burnt orange and burgundy. It is a distinctly Islamic creation. Yet I feel a hushed, venerable atmosphere, ancient beyond the age of the current building. 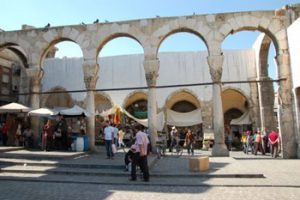 All the mosque’s predecessors may have been cleared away for Khaled Ibn Al Walid’s grand project yet the current building preserves elements of what was lost. The current construct follows the pattern of many of the lost buildings. The walls of the temple of Jupiter define the outer extent of the mosque. The courtyard wall opposite the souks is in fact one of the original temple’s walls. Likewise, the eastern and western watchtowers of the temple became the bases of the mosque’s eastern and western minarets. The main prayer hall is built over the site of the Christian basilica and incorporates the remains of the cathedral’s shrine of John the Baptist.

The stone of the demolished roman buildings was recycled when the mosque was built. In places, where the mosaic or marble facings have come away, it is possible to see the old, reused stone blocks. Roman columns and capitals are used throughout, holding up the outer arcades and lining and dividing the inner space of the prayer hall. The Umayyad mosque is certainly one of the treasures of Islam. It also preserves fragments of its site’s sacred past, incorporating them into the worship of the present.

The mosque is open from dawn until after sundown prayers but closed between 12.30 and 2pm on Fridays.
Black robes are provided near the ticket office for those who are not suitably dressed. Shoes must not be worn in the mosque but socks are permitted.
For further information: Syrian tourist board site
Some airlines flying to Damascus: BA, Air France, Syrian Air, Lufthansa

About the author:
Natasha Sheldon is a writer of fiction and nonfiction. She is the Archaeology feature writer for Suite101 and has published three works on Roman magic and religion. She loves to travel. Adventures to date include riding camels in the Sahara and having tea with the Bedouin. Her website is www.ancienthistoryarchaeology.com

All photos are by Natasha Sheldon.