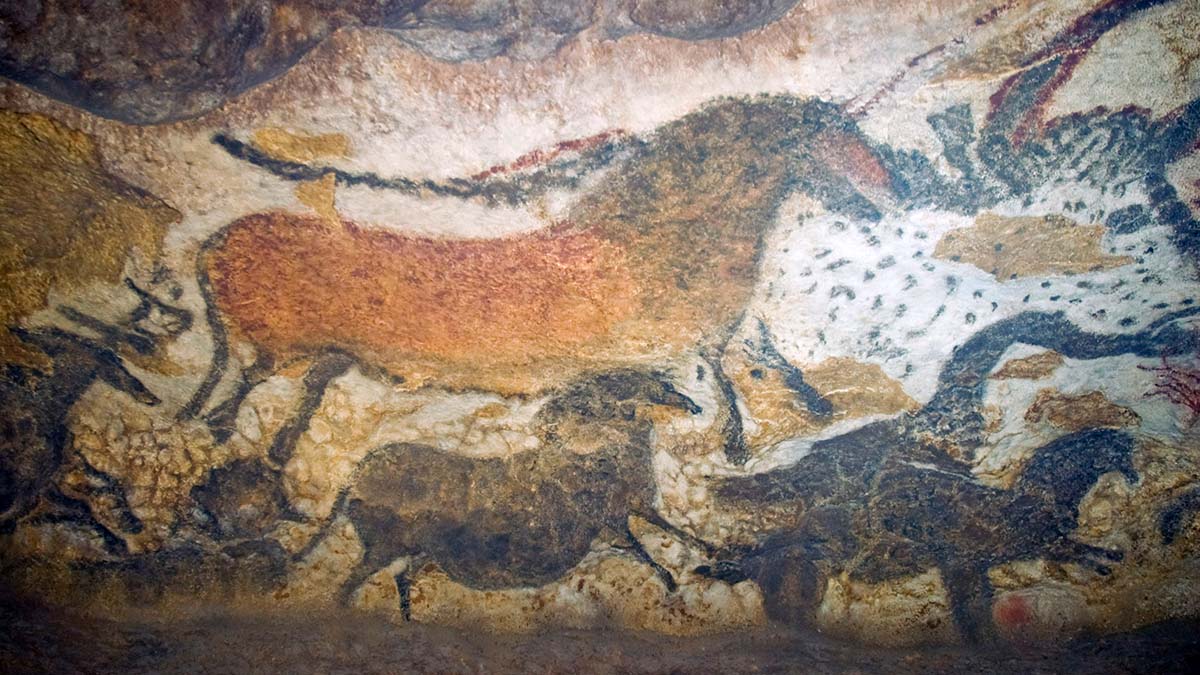 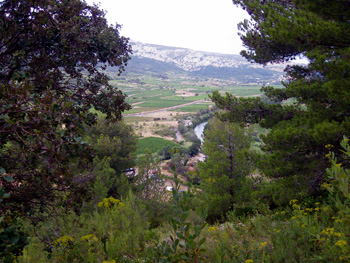 History, as it’s studied in school, can be a tough concept to wrap your head around. Centuries can be covered in days; weeks can be spent on one event. For many, the time when prehistoric man was living and roaming the caverns and fields and mountains of the Earth gets scrambled with the era of the dinosaurs. I had a hard time figuring out a real timeline when I was in high school history class. In fact, it’s only been in living history, in exploring the places where these things actually took place, pressing my hand against the wall of a building that once witnessed a revolution, a king’s court dance, a meeting of the French Resistance, that I’ve been able to understand, even a little bit, the events, the moments, the people that came before me. 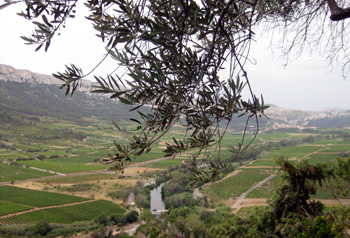 But somehow, prehistory is harder to get a grasp on. How can you look at a place and imagine nothing, none of the buildings or houses or even roads, none of the modernity that seems to exist wherever you go today? It’s difficult, near impossible, and yet I found it much easier to wrap my head around the prehistory as I journeyed through Southern France.

The Aude department of France is a region that seems to exist out of time anyway. Nearly everywhere you look, you can frame the views to exclude the houses, the cultivated grapevines, to see just rolling hills, the Pyrenees Mountains in the background and the stone caves hidden within the valleys and cliffs that pervade the landscape. While calling prehistoric man a caveman is a misnomer, it is, in fact, within one of these caves, the Caune de l’Arago or Arago Cave, that Tautavel Man was discovered in the 1960s. 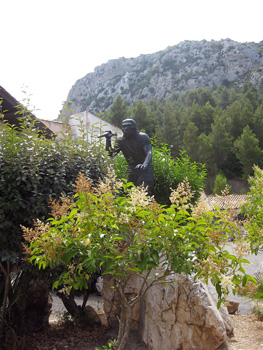 Tautavel Man is a 450,000-year-old fossil, a proposed subspecies of Homo erectus, one of our true ancestors. I find it incredibly hard to fathom the time between when he was born and when I was, and yet that’s the point of the museum in the town of Tautavel, which explores the discoveries uncovered in the cave and offers a unique view of life in this region at Tautavel Man’s time.

The exhibits are the result of several historical digs in the cave at Arago, which was occupied for nearly 200,000 years. The first evidence of prehistoric life in the caves was uncovered in 1828 – the same period when the street rebellions featuring in Les Misérables were taking place in Paris. Here, though, with the clear views over the hills and the mountains, time seems to collapse onto itself. It’s easy to imagine, as you peer at the photos of the digs, the reconstructions of the caves within the museum, that these discoveries are happening right now, and even, that this is the view that Tautavel Man had from the space he called home. 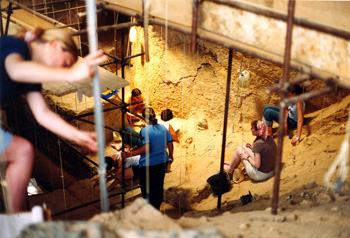 The museum is split into two portions: the first is in the village and offers an exploration of the tools and shelters created by Tautavel man and his contemporaries. Visiting this portion of the museum first allows you to experience some of the wonder that the first archaeologists excavating in the cave above did.

This portion of the museum is the perfect introduction for what will follow. These tools in mind, this life of hunting, gathering, preparing food and seeking shelter is only highlighted as you ascend on foot to the top of the hill overlooking the town, towards the second museum, home to a great variety of dioramas, interactive displays and videos, explaining not only what Tautavel man’s life was like but what this part of the country was like. Leaving the museum, the scenery below looks completely different as you imagine animals more often associated with the African plains roaming what is now mostly cultivated grapevines. 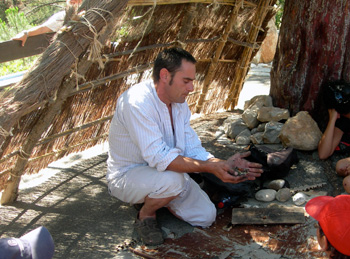 The museum is ideal for visits with kids, complete with activities in the summer including teaching participants how to throw a spear or make fire out of stones and moss. But even for adults, these activities are essential to gaining a true glimpse of life in the time of Tautavel Man.

But while Tautavel allows you to explore man’s daily life 450,000 years ago, his tools his food, his technical ability to survive, Lascaux, just a bit to the north, allows you to understand what makes man truly man: art. 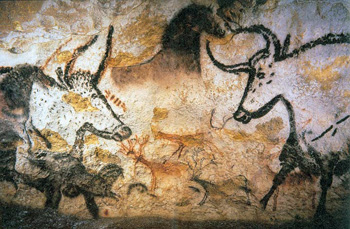 It is in Lascaux that, in 1940, three local teenagers accidentally stumbled upon prehistoric cave paintings, changing the way that we perceive of these “cave” men forever. Soon after their discovery, experts identified the paintings as Paleolithic art, some of the earliest to have ever been discovered. The paintings are far more recent than Tautavel man, at 17,300 years old, and they have long been a draw to this region, not far from Limoges, where art still remains an important element of local life due to the tradition of Limoges porcelain. 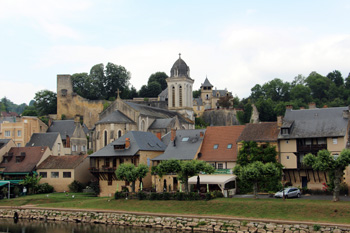 I went to Lascaux to visit the caves, but like all visitors since the 1960s, I actually visited Lascaux II, a replica of the original cave, which was closed when experts realized that lichen had become prevalent due to the frequency of visits and risked destroying the paintings. But visiting Lascaux II is not discouraging; after buying our tickets in the village of Montignac below and driving up to the caves, we are taken on a journey through time.

Visits to Lascaux are always guided. At first, this seems strange – the journey only takes place along a few meters – but soon, you realize why this is necessary. Glance at the paintings, and you’ll see something: a representation of an animal that seems familiar, a use of color that seems to stay in the realm of rust, brown, tan, black. But with the guide, the reality of the brilliance of these paintings comes to life. 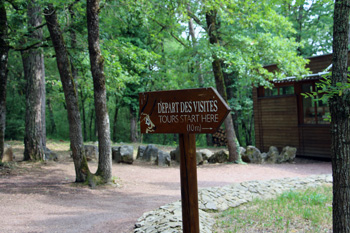 The guide goes into details that never would have occurred to me over the next 45 minutes: how the paints were made by the artist, who shows considerable skill in representing the animals that existed around him including horses, cattle and stags. As we wander through the caves, I almost forget that this is a facsimile, until the guide explains the feat of reproducing the caves using a concrete base and the recreation of the same sorts of paints that would have been used for the originals. Lascaux II is accurate up to a couple of millimeters to the original.

But even more important than the how of the Lascaux caves is the why. It’s a question that has plagued artists for centuries – and now, we know, for millennia. Why did the artist decide to portray these scenes of life, of the things that surrounded him? What was the impetus for the cave paintings of Lascaux?

These questions only lead to more questions, even amongst experts. Why, for example, are there no reindeer displayed, when this was the principal food source for the artists? How talented must the painters have been to be able to use perspective to create a sense of depth? How did they know what rhinoceros were? There must have been some in this area, though it seems impossible to imagine, just as it did in Tautavel.

While all of these questions bring us closer to the answer, none answers it. Today, some researchers claim that the paintings are prehistoric star charts, guides to the summer night sky and what we would later call the zodiac. Others say that the work is religious or spiritual, conceived from visions experienced during trance dancing.

Whatever the paintings mean, they give us a key to understanding the thoughts and feelings of some of our furthest ancestors, from a time before there was history, before there was writing. It seems impossible to fathom: we are so close that we can touch the walls of these caves, cool and solid, and yet the men and women who made these paintings could not speak to us, write to us.

I wonder if it’s not something I’m meant to understand completely. Perhaps it’s the dark, or the bodies of people I don’t know pressed up against mine as we move through the narrow passages. Perhaps it’s the fact that, after thousands of years, these paintings can still convey their effect. Here, walking through these caves, I feel, as I did overlooking Tautavel man’s backyard, as though we are one and the same. As though this is, truly, our shared history. 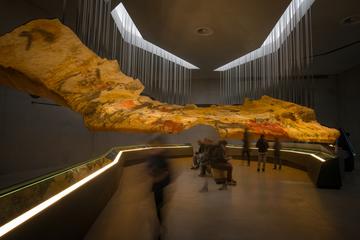 Lascaux IV and The Art of the Caves in Sarlat

About the author:
Emily Monaco is a born-and-raised New Yorker based in Paris. After pursuing a Masters degree in 19th century French literature – and many years of trying – she has come to the conclusion that she will likely never be French. She has since devoted herself full-time to writing about food, drink and culture shock for various publications and on her blog, Tomato Kumato. She also offers guided tours of Paris’ food, wine and literary haunts. Emily is always on the lookout for an excellent cup of American coffee, a good beer and fantastic cheese.