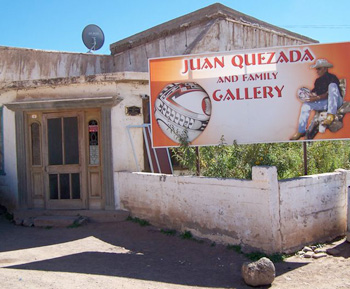 The two-lane paved road rises and falls, twists and turns, like a dangling rope, through the rugged Chihuahua hill country of northern Mexico. It’s amazing that one of Mexico’s most famous potters lives out here.

Shimmering in the stark desert light is the village of Mata Ortiz, home of Mexico’s renowned potter Juan Quezada. In the mid-day heat, the pueblo is deserted except for a few stray dogs roaming the dirt-rutted streets. Old adobe walls and ramshackle wooden fences are laced with clotheslines of brightly colored garments drying against a brown desert backdrop. Chickens and other farm animals, including a burro, shade themselves in the huts. A lame horse stands on three legs tethered to a large tree. 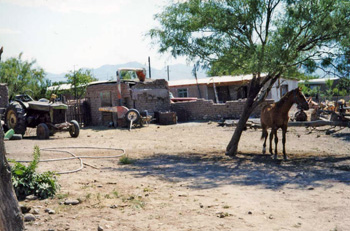 Quezada’s modest gallery is on the corner of the main street across from the historic, refurbished railroad line. As I enter, the artist, now in his early seventies, breezes in from the side room. Dressed in a faded tan cowboy hat, trim, medium height, bantamweight, looking fit as an Oklahoma rodeo wrangler, he welcomes me: “Buenas tardes, señor. Mi casa es su casa,” His rugged, suntanned face exudes a quiet humility and keen curiosity shaped by his many years of desert life. Later, he puts his arm around me, and Dick snaps my photo.

Juan Quezada has revived a lost ceramic tradition that had once thrived here among an indigenous people called the Paquimé. At its peak from 1200 to 1450, this civilization skirted the width of the Sierra Madre Mountains, encompassing the states of Chihuahua and Sonora. The spiral-formed polychromatic clay pots on display at the Museo Centro Cultural Paquimé in nearby Viejo Casas Grandes are objects of extraordinary beauty. 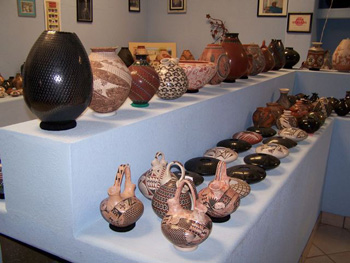 The pale sky-blue adobe walls in the front room are lined with ollas and vases, glazed in a rainbow of rust-red, brown, and eggshell hues and painted with intricate, geometric designs. Sunlight, streaming through the thin violet-blue curtains, casts an iridescent glow on them. I am mesmerized by their spiral, thin-walled shapes and meticulously painted and etched patterns.

The long table in the adjoining room is covered with the rest of the family and neighbors’ pots, bowls, and figurines. Many of them, glazed in rust-red and cream brown pigments, feature water snakes and macaws—animals of great importance to the ancient Paquimé, but now extinct in the region.

I ask Juan if anyone has written a corrido, the ultimate Mexican tribute, about him and he immediately pulls a cassette out from a drawer. It has several ballads praising him for his contributions and calling him El Maestro. Beaming with pride, his wife Guille makes sure that he plays El Corrido de Juan Quezada sung by Ricardo Garcia for us. 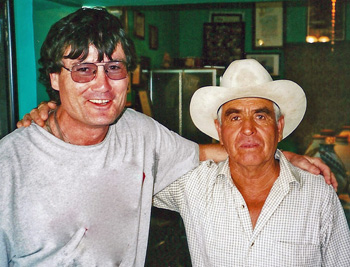 My mind wanders as the room slowly fills with the lyrical beauty of Garcia’s baritone voice and guitar strumming. I gaze out the window. The heat glimmers over the parched, dust-colored land. Nothing seems to be alive except patches of creosote and agave clinging to the desert emptiness. How could such incredible artistic beauty come to exist in such a remote, hardscrabble place?

The freedom and joy of discovery, I begin to realize, lies not in seeing new places, but in seeing things in new ways. The desert’s beauty lies in its austerity-—the spiny, oddly shaped plants, stark light, brilliant colors, and rich seams of clay. The texture, shapes, and colors of Quezada’s pots and vases convey in some strange but fascinating way its ambiance. The desert is at the core of Quezada’s existence.

He grew up poor leaving school at twelve to collect firewood and herd sheep in the hills above the village. While gathering firewood, he stumbled on some pottery shards from in a mountain cave, a Paquimé burial site. 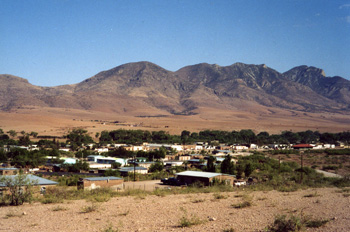 “The first time I saw those pieces,” Juan tells me in Spanish, “I knew I had found a hidden treasure. I knew that the ancient ones must have found the materials here.” Over many years, he has patiently experimented with different clays, pigments, drawing and firing techniques to make ollas or pots with the ancient culture’s iconography and design.

He did this without any training or exposure to an artistic tradition or art community. “Nobody taught me. Nobody knew about the ancient ones when I was a boy,” he says.

The story could have ended here, lost in the buried memory of a poor village, but it did not because of young Quezada’s artistic genius, obsessive curiosity, and unlikely friendship with the American art dealer and anthropologist Spencer MacCallum that would change the fortune of the little town and shape an artistic legacy whose reach is still unknown. 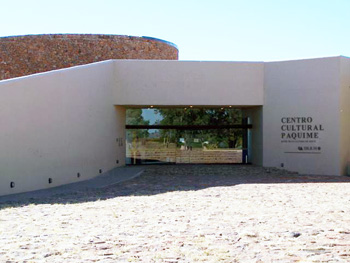 Like a tale out of the Wizard of Oz, it began in 1976 when MacCallum stopped off at a second-hand swap shop in the New Mexico border town of Deming where he bought three unsigned pots. Intrigued by their intricate beauty and wondering if they were pre-Columbian in origin, he embarked on an adventure south that would take him to Mata Ortiz and the unknown potter.

A friendship quickly followed, and over the next six years, MacCallum provided Juan with money to work full-time at his craft, while he set up exhibits in the United States to premiere Juan’s work. “His arrival was a gift from God, a miracle,” according to Quezada.

Mata Ortiz today is the center of a bustling ceramic cottage industry. It attracts traders, collectors, gallery owners, potters and tourists. About one-fourth of its 2,600 inhabitants earn their livelihoods as potters—a significant number of them trained by Quezada himself, while others have developed their own unique styles and techniques. 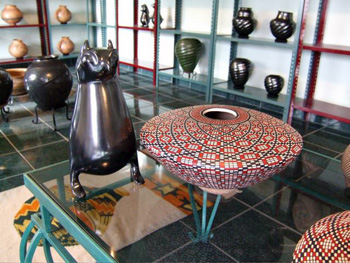 The homes, some humble brick adobes; others larger cinder-block buildings, resonate with an infectious warmth and vitality for work. Children breeze in and out as if flying on broomsticks. Pots and vases line oilcloth-covered tables. I look over the shoulders of men and women as they shape, polish and paint at tiny sunlit work stations. They shape the lower portion of the object in a plaster mold, place a single coil of clay atop it, and then by hand work the clay upwards to form their thin-walled bowls, jars, and pots.

A piece of hacksaw blade is used to smooth the surface. Objects are dried outside and then stone polished and sanded smooth without glazing. Hand-made kilns or just an inverted galvanized bucket buried in dried cow chips or cottonwood bark is used to fire the pots. Paints are made from minerals collected from rim-rock hillsides and nearby arroyos. The delicate, long flowing designs of the pots and ollas are painted with brushes made from children’s hair or etched. 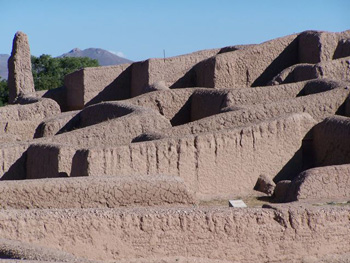 Today, one of Quezada’s pots can sell for thousands of dollars. In 1999, he received the Premio Nacional de Ciencias y Artes, Mexico’s highest award given to a living Mexican-born artist.

His new home, a ranch house, stands on a hilltop overlooking the pueblo. He calls the place Ranchito Escondido, his hide-out. The property includes the land where he used to gather firewood. It has a rich vein of white clay, which he shares with other village potters. “Every where the sun shines is for everyone,” he says. A profound love of family and place, his belief in preserving a cultural heritage is what keeps this acclaimed artist rooted here.

His eldest son Arturo, brother Nicholas, and sisters Lydia, Genoveva, and Consolación have all become master potters. The hills, dark and barren, hold the materials of his craft and Quesada’s identity. He remains who he has always been: a potter who believes in miracles.

Getting There:
♦ The nearest large city, Nuevo Casas Grandes, has no commercial air service, but does have facilities for private planes.

Attractions:
♦ Among the attractions in Casas Grandes is the excavated prehistoric ruin of Paquimé. One of the most important prehistoric sites in northern Mexico, this commercial-religious center’s sphere of influence extended throughout Chihuahua and Sonora between 1200-1450A.D.
♦ The museum at the Centro Cultural Paquimé houses an outstanding collection of Paquimé artifacts, including ceramics, jewelry, fabrics, and stone masonry. Text panels are in English and Spanish.

Accommodations:
♦ The art gallery and bed and breakfast Las Guacamayas (“The Macaws”) is near the museum. It is owned by Mayté Luján.
♦ A block from the plaza is Spencer and Emi MacCallum’s La Casa del Nopal.
♦ In Mata Ortiz there is The Adobe Inn, known locally as “the hotel”, Marta Veloz’s Casa de Marta, and the Posada de Las Ollas.