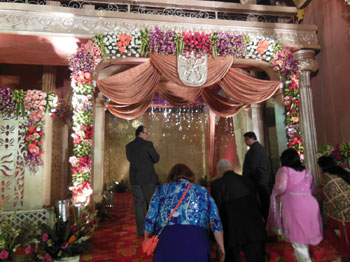 “We are wrens among peacocks” I whispered to Jean. Colorful saris swirl around us: brocades, silks, embellishments galore. Miles of pink and orange fabric drape the perimeter, festooned with garlands of golden zinnias and bouquets of pink roses. Miniature lights twinkle; aromas of spicy curries waft from the adjacent tent to mix with the fruity tobacco from the hookah bar. A techno beat draws guests to the dance floor, and our feet are tapping as we accept flutes of champagne. It is the 3rd night of festivities and we are only halfway through the wedding week. 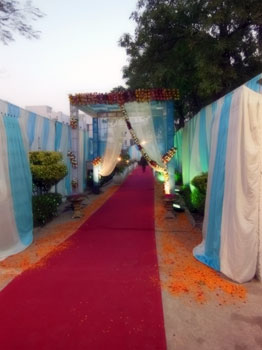 We had accepted the gracious invitation of our dear friend and former professor, Mohan, to attend his niece’s wedding in New Delhi. He assured us that a traditional Indian wedding was an experience not to be missed. Typically lasting the better portion of a week, it is a lavish celebration. Family and friends come from all parts of the globe to commemorate the nuptials, as well as catch up with those living in distant lands. Parents plan and save for weddings from the time of their child’s birth. Marriages are frequently arranged by parents; however the couple are allowed the final choice.

It began with the first of two pujas, a traditional Hindu prayer ceremony. We sat cross-legged on floor among the other women, men around the outside and family members toward the front. There was a small shrine, and gifts of fruits and sweets were placed among the candles. We were handed small prayer books (quite optimistically as they were printed in Hindi) and shown where to join in. The air was thick with incense as the chanting, clapping and singing continued. It was an easy atmosphere, with folks moving about the room, heads huddled in conversation, laughter rising to meet the music. The bride and other young girls twirl in joyous dance. We feel like voyeurs in this unfamiliar setting, although our presence was greeted with smiles and we were beckoned to join the dance. Into the tent draped with turquoise and white fabric, twinkling lights and flower garlands for the reception to follow: food stations all around with an astounding array of tasty treats. Tonight’s menu is vegetarian since it is part of the religious ceremony: spicy curries, grilled skewers of cheese, chick pea fritters, freshly made naan and chapati filled with an awesome mixture, tomato soup, cucumbers,carrots, mangoes…we cannot possibly sample everything but we save room for our favorite pistachio kulfi (ice cream). 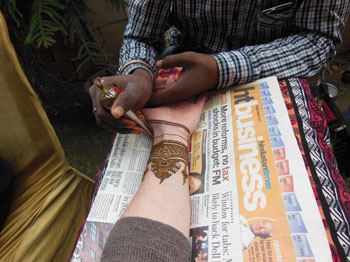 The official engagement party was to begin at 8 pm; we arrived at 10pm, about the same as the hosting groom’s family. Again it is over-the-top decor, flowers and twinkle lights, food galore, and an open bar. The bride’s family present gifts of jewelry, cash and sweets; a Hindu pundit (priest) blesses gifts and the exchange of rings, which seemed a bit perfunctory given all the glitz. The band cranks up and dancing begins. Jean is a desired dance partner and the only female at the hookah station. We leave exhausted at 3 am, and there are small children still dancing. 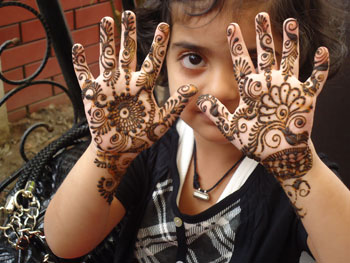 Our hennaed hands are dark, dramatic souvenirs of the mehndi. Held in the front courtyard of the bride’s parents’ home, the henna application is an informal family event. People move in and out of the house, children play, delicious smells come from the kitchen–lamb kabobs and goat curry. We sip chilled mango juice as we wait our turn with the henna artists; one of the aunts plays a drum and soft singing follows. What a privilege it has been, being folded into the family. At last night’s party, we were asked if we were relatives from Kabul! Tonight is another twinkly function of food, drinks, flowers, hookah…is that Mohan in a conga line with a basket on his head? He deems it the “Punjab Soul Train”. 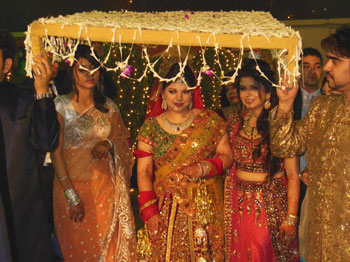 We are introduced to IST: Indian Standard Time. Nothing starts on time, everything takes longer than expected, punctuality is not a prized virtue. The official wedding day has arrived. Traffic is heinous, so we are over two hours late. However, we are among the first of the 800 or so guests to trickle in. The decor of flowers, fabric and lights is amplified for tonight; an army of waiters laden with trays of hot hors d’oeuvres and drinks resembling mojitos descend as we enter. A great ruckus draws us back outside; the groom and his family have arrived.

Heralded by drums, brass band, torches and banners hoisted,a clapping crowd usher in the horse drawn carriage bearing the groom. Father of the bride greets father of the groom; uncles-uncles; brothers-brothers. Eventually everyone is back inside, where the bride proceeds under a canopy held by her brother and cousins, with female relatives behind. She is stunning and her costume must weigh 25 pounds. The couple stand on an elevated dais, before a purple velvet settee. Photographers begin a lengthy session. I admired the couple’s stamina. It will be dawn before the ceremony concludes.

♦ Best time is November-March to avoid oppressive heat and monsoons. January is a popular wedding month.
♦ Pack your patience–Delhi is chaotic!
♦ Side trips to Agra/Taj Mahal and Jaipur are easily made from Delhi.
By Train: indiarailinfo.com
By Plane: airindia.in

About the author:
Marsha Rexford is a veteran traveler with a special fondness for the road less traveled, whether on foot, bicycle or the occasional pack animal. She is transitioning from a career in healthcare to free lance writing. Currently living in North Carolina, she can be reached at mrexford1@carolina.rr.com

All photos are by Marsha Rexford except #4 by Jean Wiegand:
Entrance to puja reception
Entrance to wedding venue
Henna application at mehndi
Women of all ages participate in mehndi
Bride with her family